One of our outings recently included a visit to the National Park on the central portion of Prince Edward Island with our daughter and grandchildren. Our destination for the day was Covehead 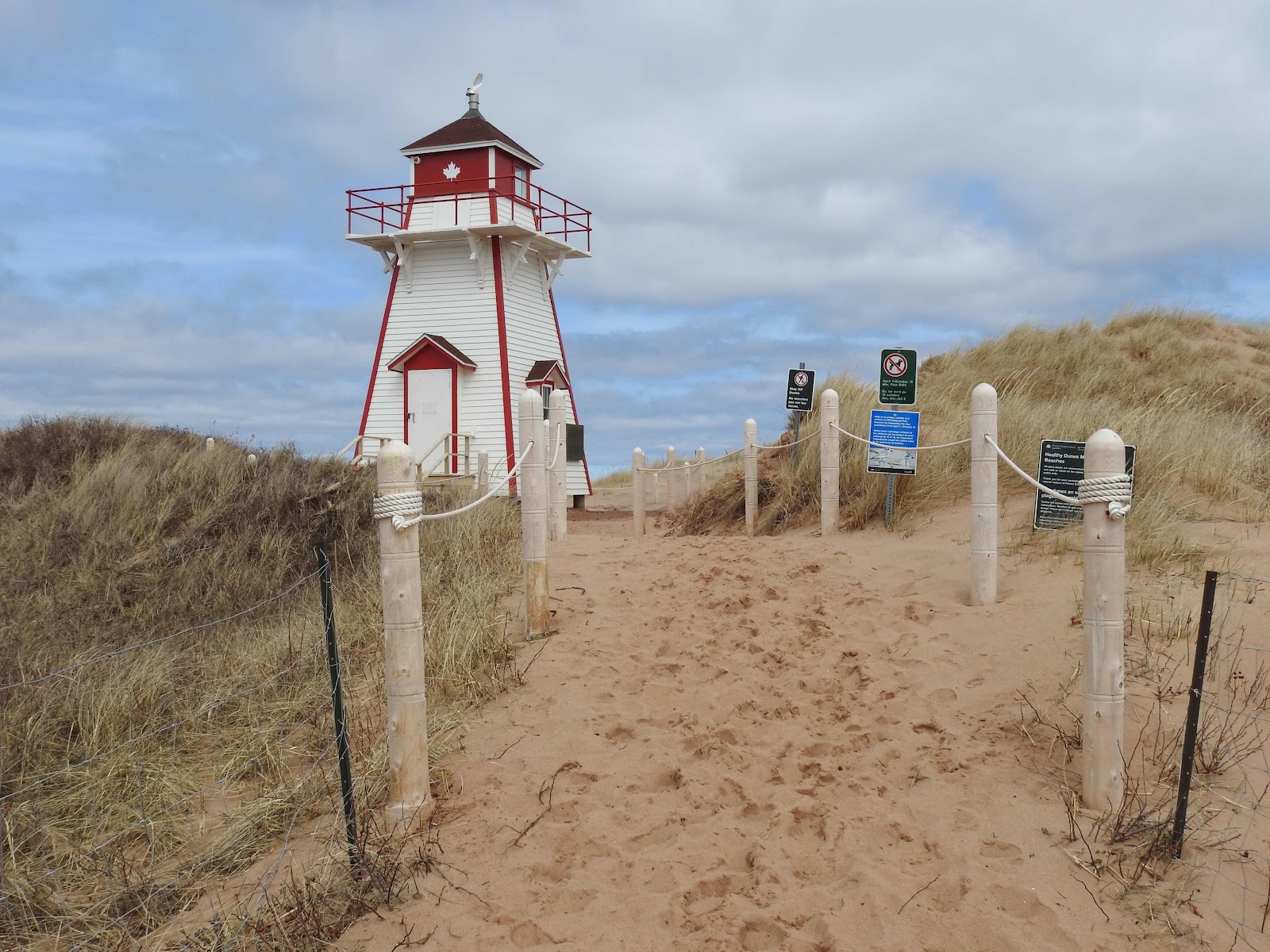 but we started with a picnic at the Babbling Brook and FarmLands trailhead where my husband and I have had wonderful picnics in all seasons. 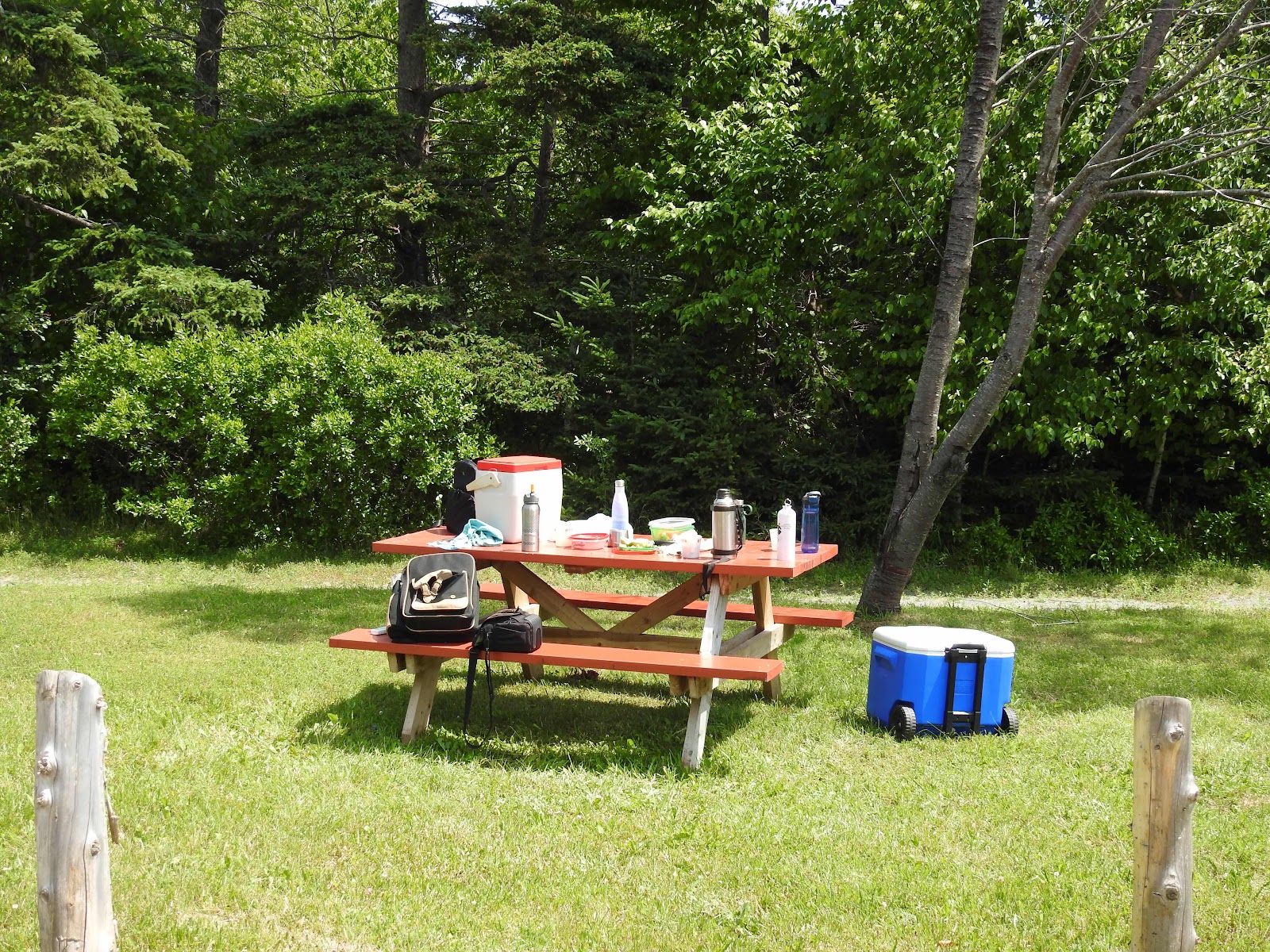 The area looks quite different from three months ago when skeleton trees harboured birds busy consuming what was left of the sumac berries. 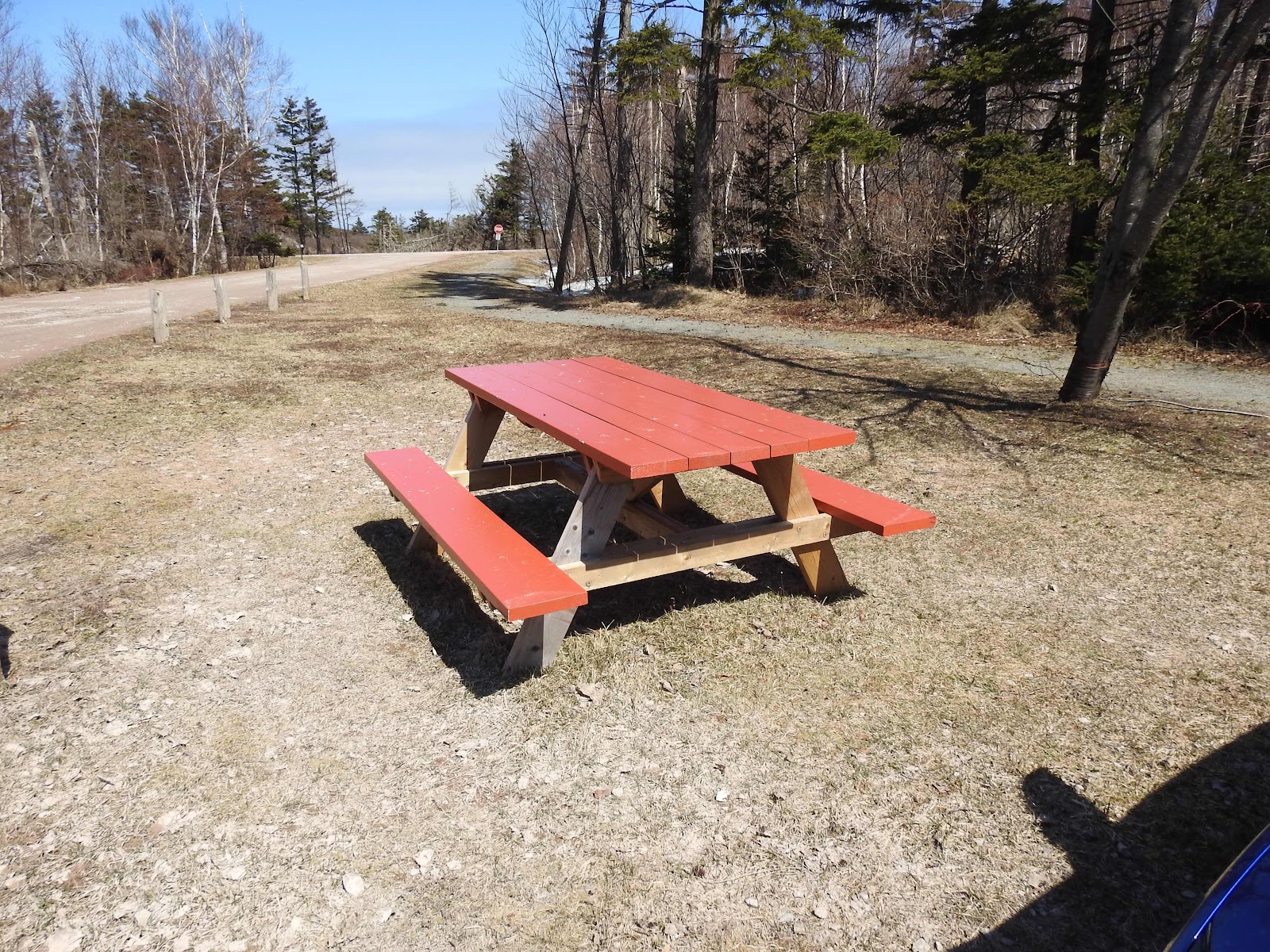 Following lunch, we went to the wharf at Covehead, where the lobster boats are tied up for another season. 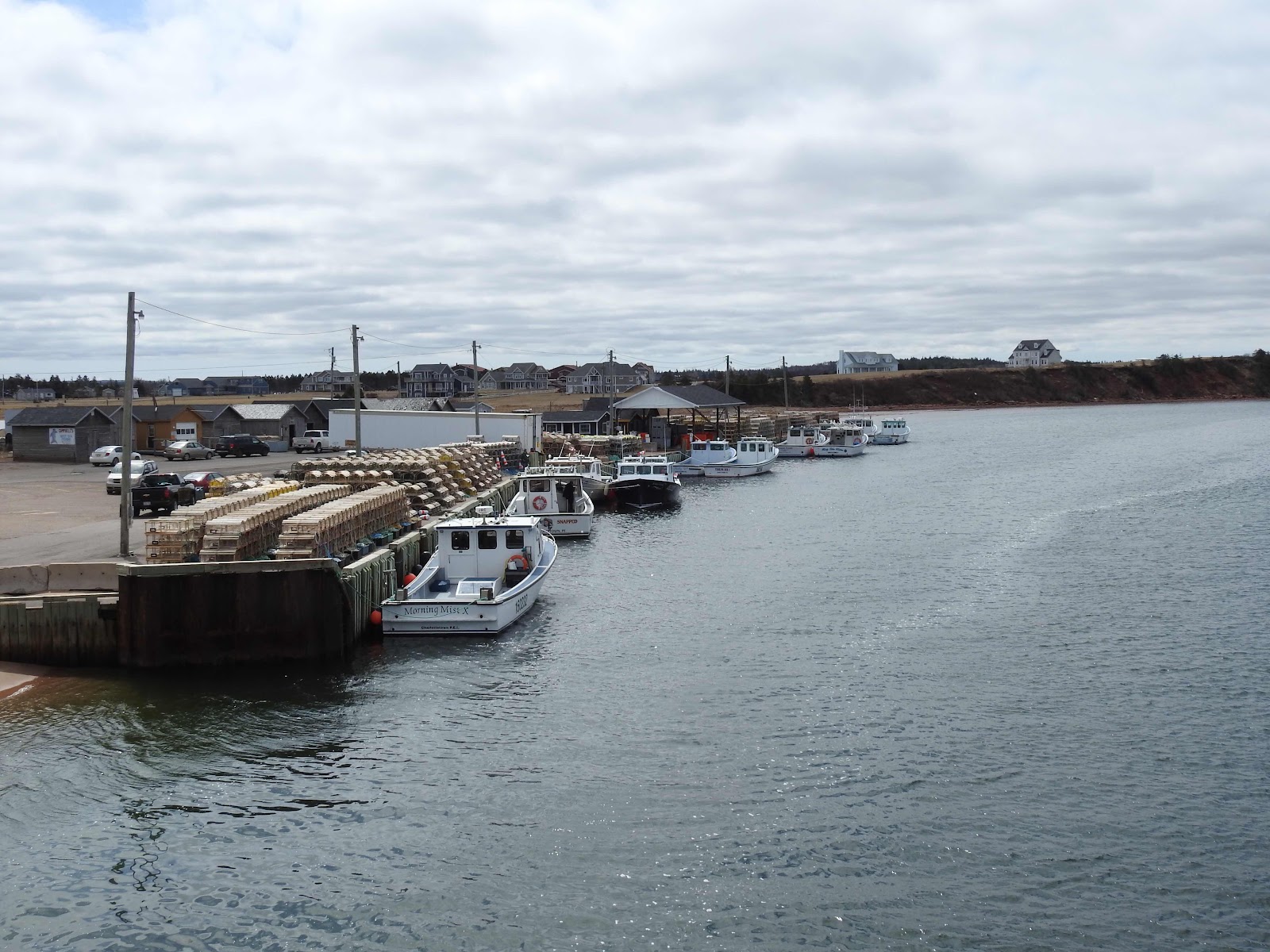 However the wharf is still busy as swimmers flock to the area to jump off the wharf into the inlet.

There is a bridge at Covehead which was the original location for the jumpers in the area. 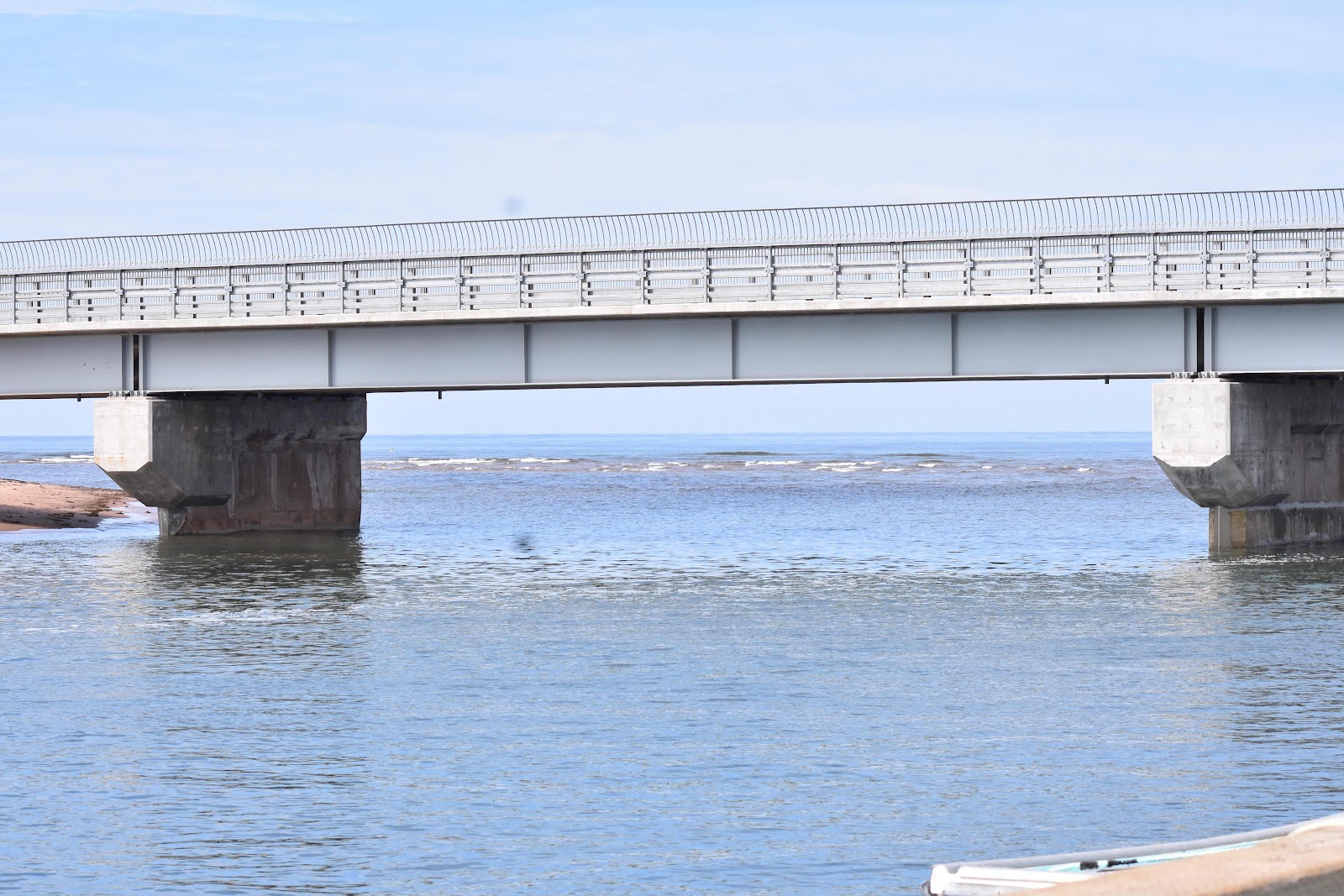 Young and old alike jumped from the bridge, checking to avoid boats going to or returning from the Gulf of St. Lawrence. New fortifications on the bridge 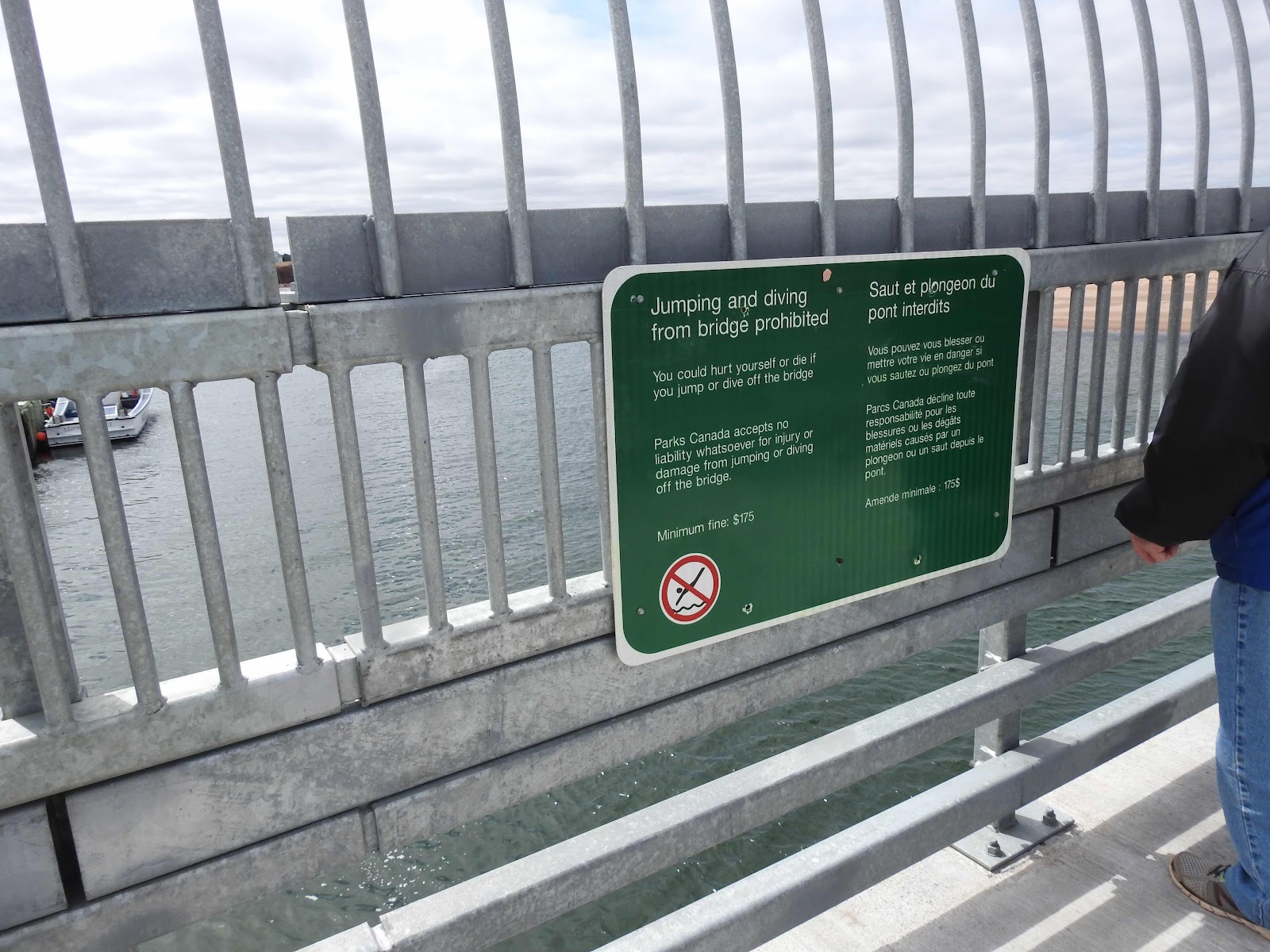 have made jumping there more difficult so the majority of jumpers now leap or dive from the wharf.

Our daughter and granddaughters were eager to join the fun that day. The girls jumped numerous times from the wharf, 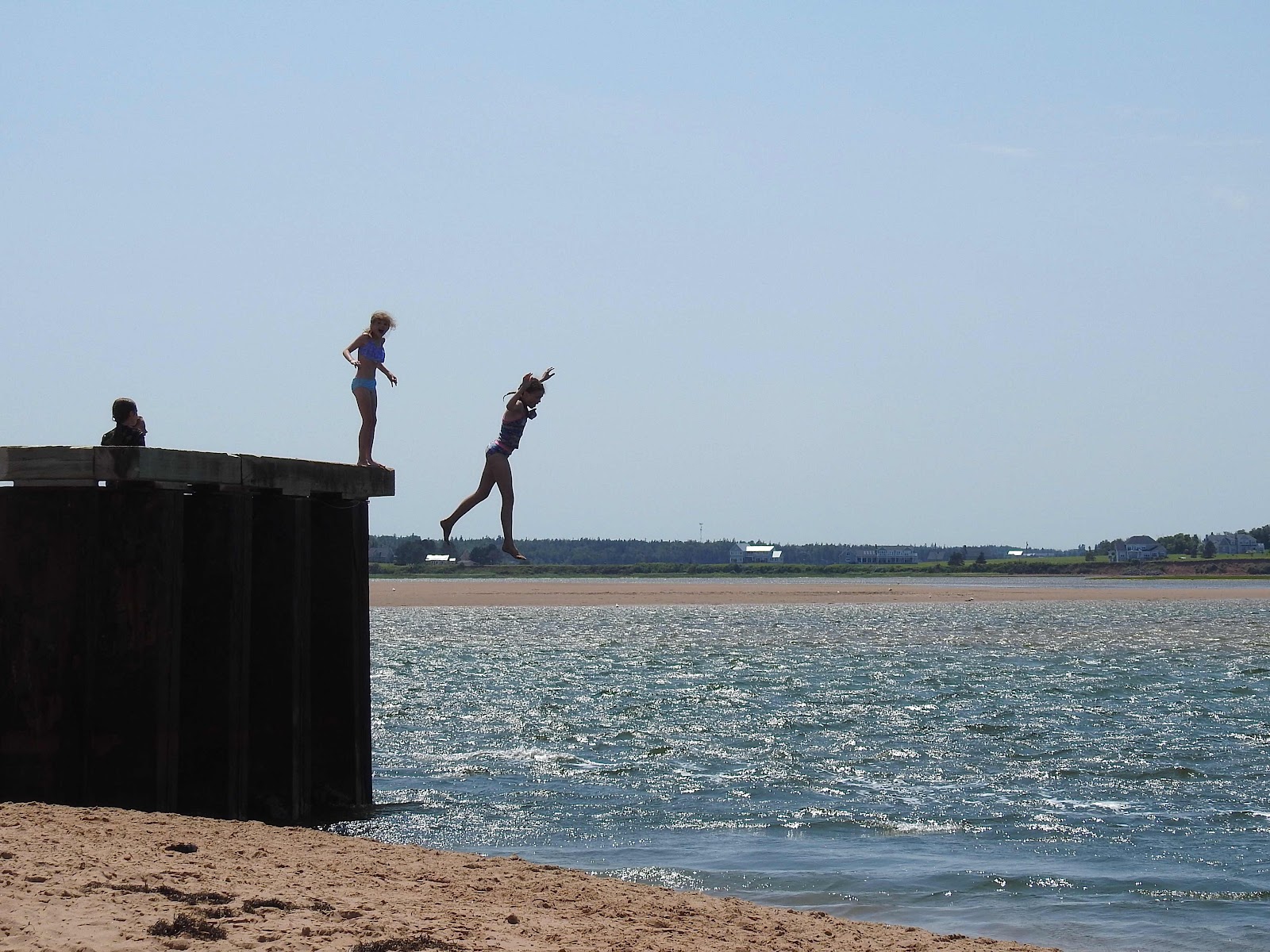 while our daughter jumped several times. My husband and I were happy to watch them. 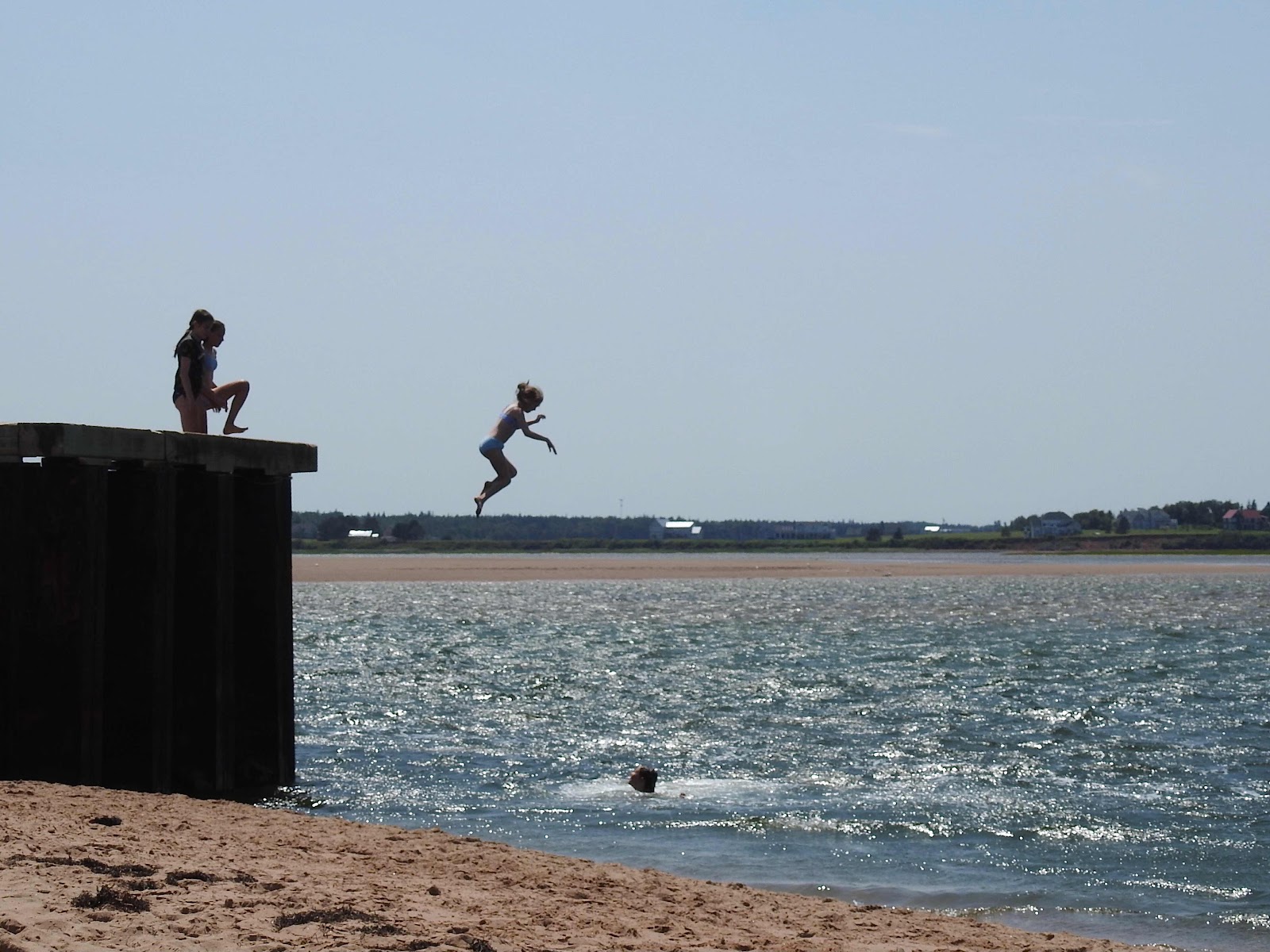 Our grandson isn’t ready for jumping yet. Instead he went for a swim and joined the girls and his mother as they floated past in the strong current that takes people under the bridge and into the Gulf if you stay in the water. 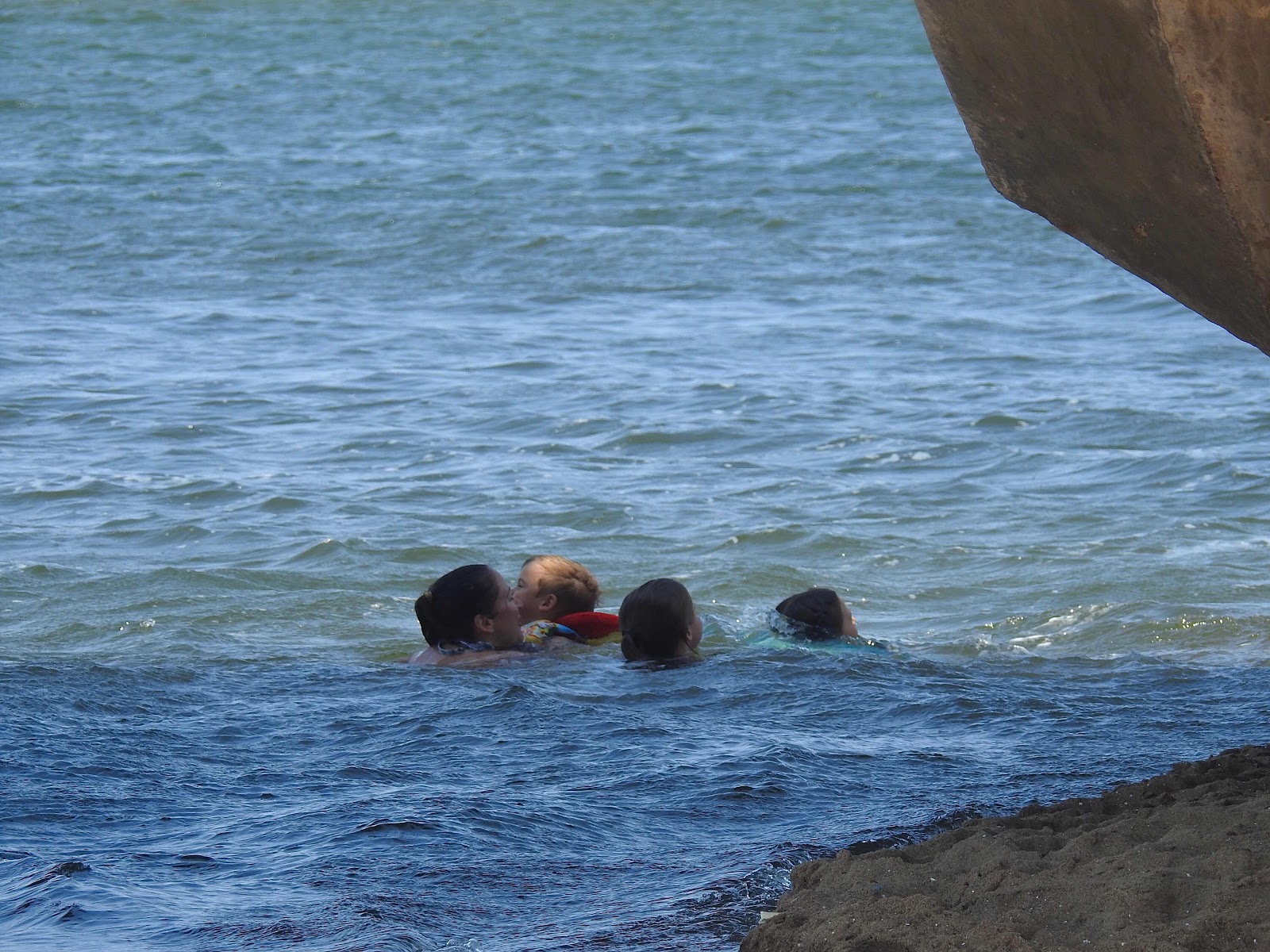 Most swimmers leave the water earlier though to jump again.

It was windy that day and gulls nearby stood into the wind. 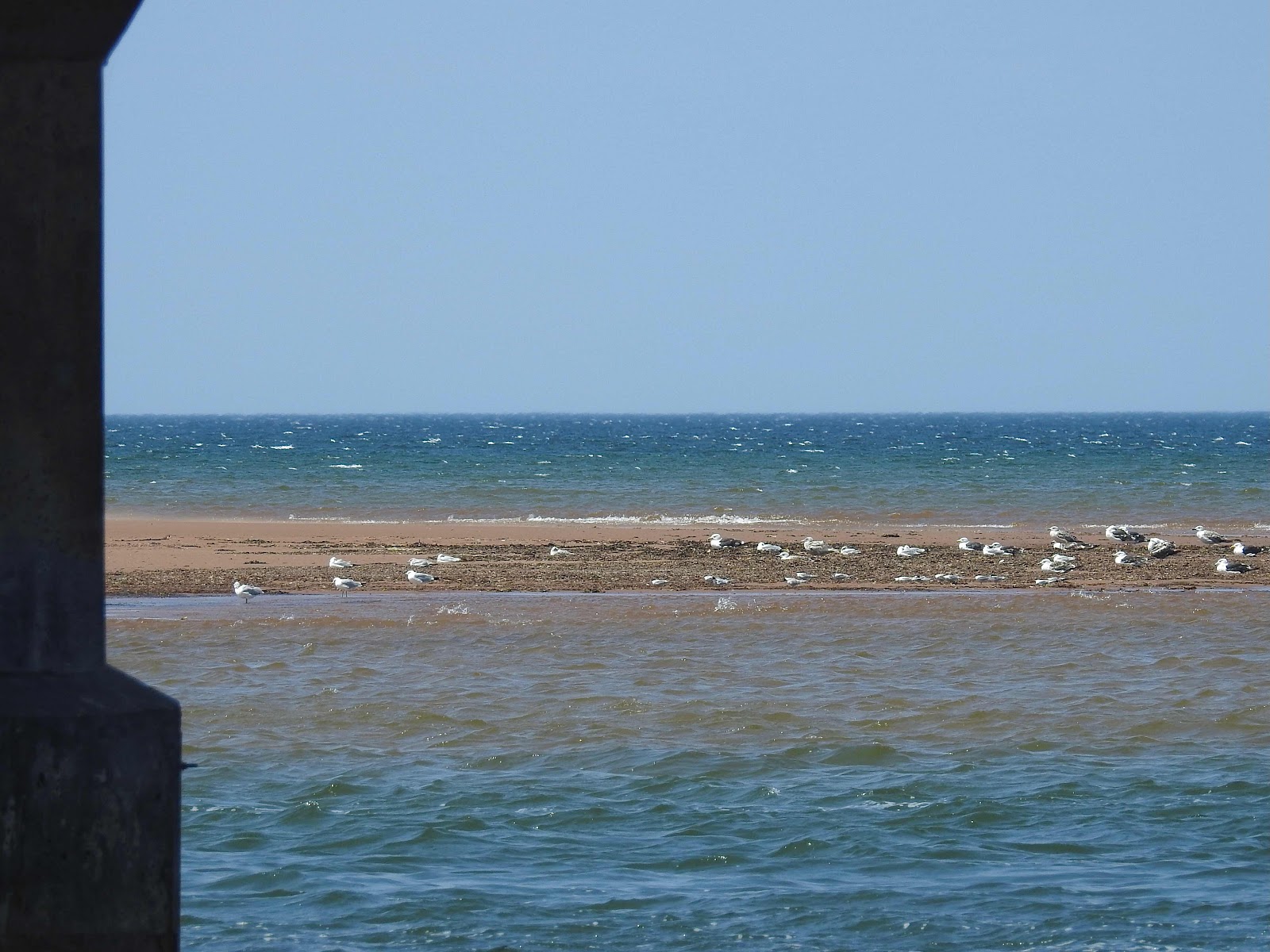 I wondered if they, like us, felt sand blasted as they stood their watch. Meanwhile a lone cormorant floated around in the water, fished occasionally or floated along with the current farther from shore but parallel to the swimmers. 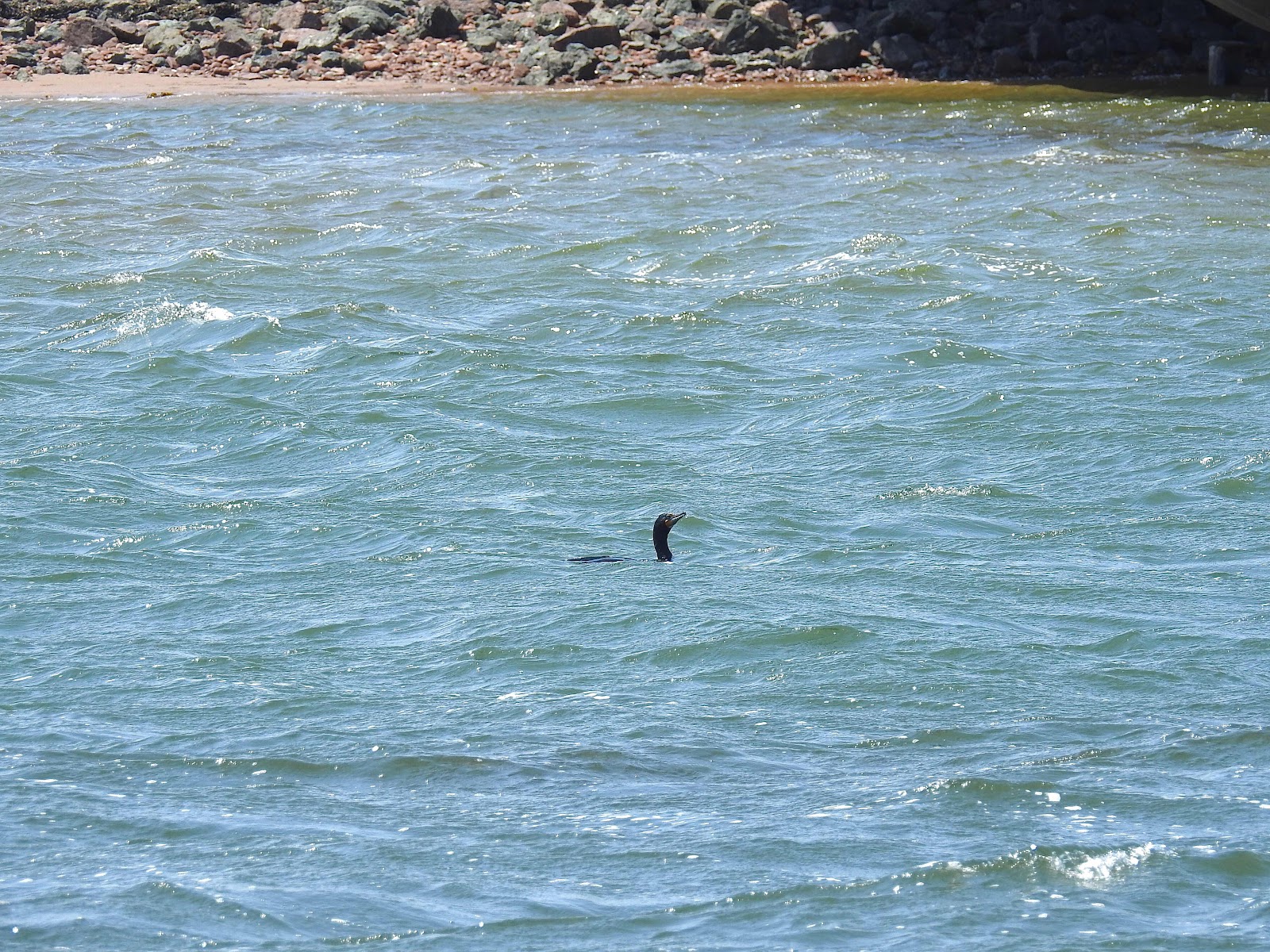 He dives from the surface of the water and doesn’t mind sharing the channel with these fine weather friends.

I used several photos I had taken on previous visits to Covehead.

I'm not surprised they've got the bridge blocked off. It looks dangerous to jump from there!

It looks like a perfect way to beat the heat! I love the jumping pictures and thought I'd like to have done that too. :-)

That looks like a great way to pass the time in the water.
We need a bit of that refreshment around here. It's suppose to be another day of 104F. hot...hot...hot...
Sue

A new generation of jumpers, I think we all loved to jump at one time or another. Those were the days. :)

Thank you for sharing this beautiful day. The change of seasons makes a HUGE difference to your picnic spot.

The water doesn't look deep enough to jump into but it must be an illusion. Brave girls!
Every summer there are police warnings here about jumping from bridges into the river. Some boys inevitably do it when it's hot but the river is dangerous as there is much underwater rubbish - like submerged shopping trollies! - and strong currents.

Looks like you had a wonderful time and made precious memories.

Ah, to have the energy of those youngsters.....

We have a bridge over the Cuyahoga River, a long, long drop. A bridge connects one part of the town to the other. Pedestrians were not allowed, but got on anyway, and jumped. Finally the city installed a kid of fencing to prevent jumpers from jumping.

I was always a chicken when it came to jumping from high places. These kids seem o be enjoying it immensely.

Hello,
What a beautiful day at the beach, fun times with the family.
Love the views of the birds and the beach and the lighthouse!
Take care, have a happy day and a great weekend!

I am quite anxious to revisit Covehead and walk the trails, Marie, but I can safely predict that neither Miriam nor I will be jumping into the sea. Of that you may be sure!

I’m glad there is still some jumping. I am reminded of jumping into the St Clair river in Sarnia.

ooooh those picnics, i am a huge fan of picnics. what a change in the landscape, it provides quite a lush view now. it looks like such a fun day, especially for the kiddos!!

i always love seeing the lighthouse, it's a really pretty one!!

Looks like it was a beautiful day for a picnic. Not done a picnic in a very long time. I think my kids were still little when I did the last one. I don't know how to swim so I have never been able to jump into the water like that but would love to be free enough without the fear to do it. Nice day.

Hi Marie: Oh, to be young and agile enough to make that jump ...

How lovely! I really miss living near water. My parents had a lake house for 28 years. There are days when my heart just aches for it.

I love the pictures of the water, the gulls and the kids jumping into the water. So much fun going on and people enjoying life. I need to see that right now as I seem to be struggling with that. Makes me want to go to Nova Scotia so bad, however. My only trip there has given me many happy memories and I do wish I could go back, this time to your Island.

Nothing like a picnic.
Coffee is on and stay safe

What a lovely day with grandkids! The best way to spend these hot days is to swim and jump into the water.

This looks like a great time at Covehead. The light house is so cool looking. And it is neat to see the picnic table in two seasons! Of course, I love seeing the lobster boats at the wharf. The kids sure had a great time jumping off the wharf. Lastly, it’s always good to see the birds. Very nice post. Thanks, Marie, for sharing.

that looks like a lot of fun jumping off that bridge!

thank you for making us part of such glorious outing with your daughter and grandchildren dear Marie :)))

i really enjoyed the jumping pics and how you described them :) reminded me jumps we made during childhood in our lost stream of the village
each photo is spectacular !