Thunderstorm at the beach

The forecast called for rain with the possibility of a thunderstorm. We watched from home as the sky darkened. Hail fell then it turned to torrential rain. Thunder rolled nearby.

Our daughter and the family were at a beach on the north shore of the island. It was a regular day at Cousin’s Shore. The stream flows from the pond behind the dunes and crosses the beach, flowing into the Gulf of St. Lawrence. 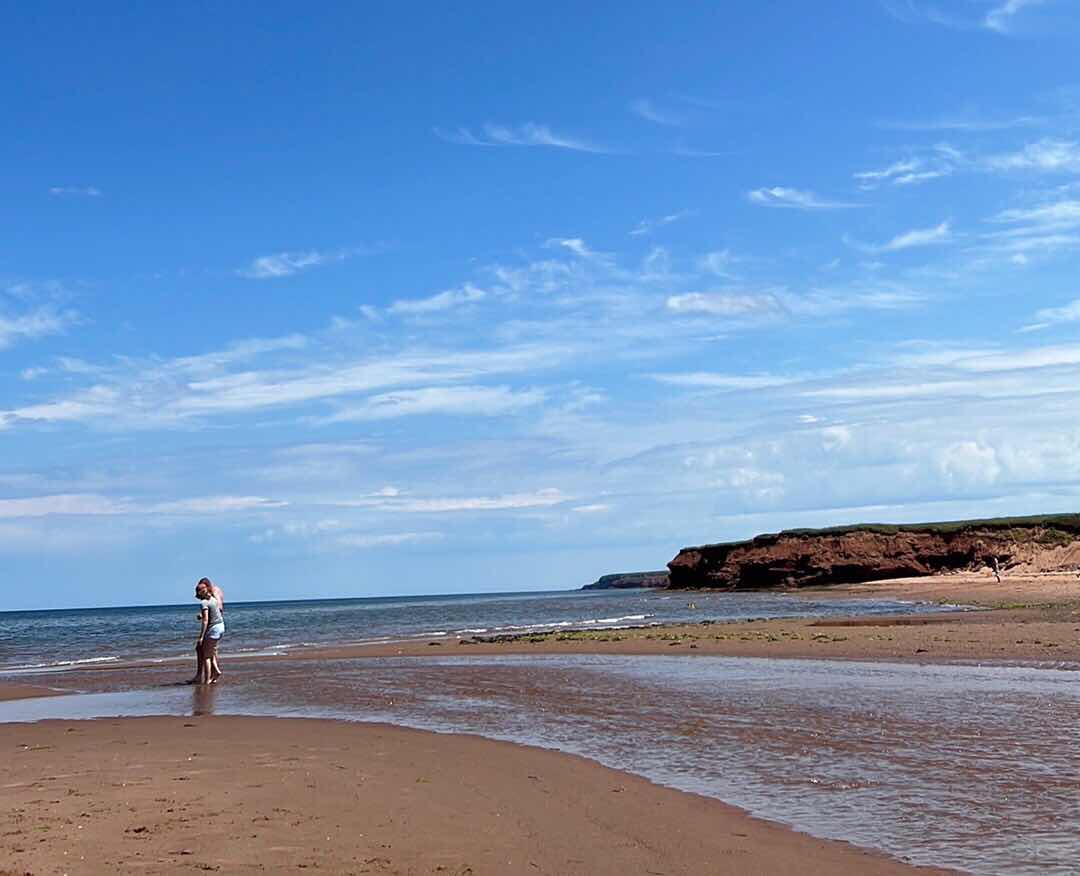 Everyone was enjoying the beach but in the east, the sky darkened. 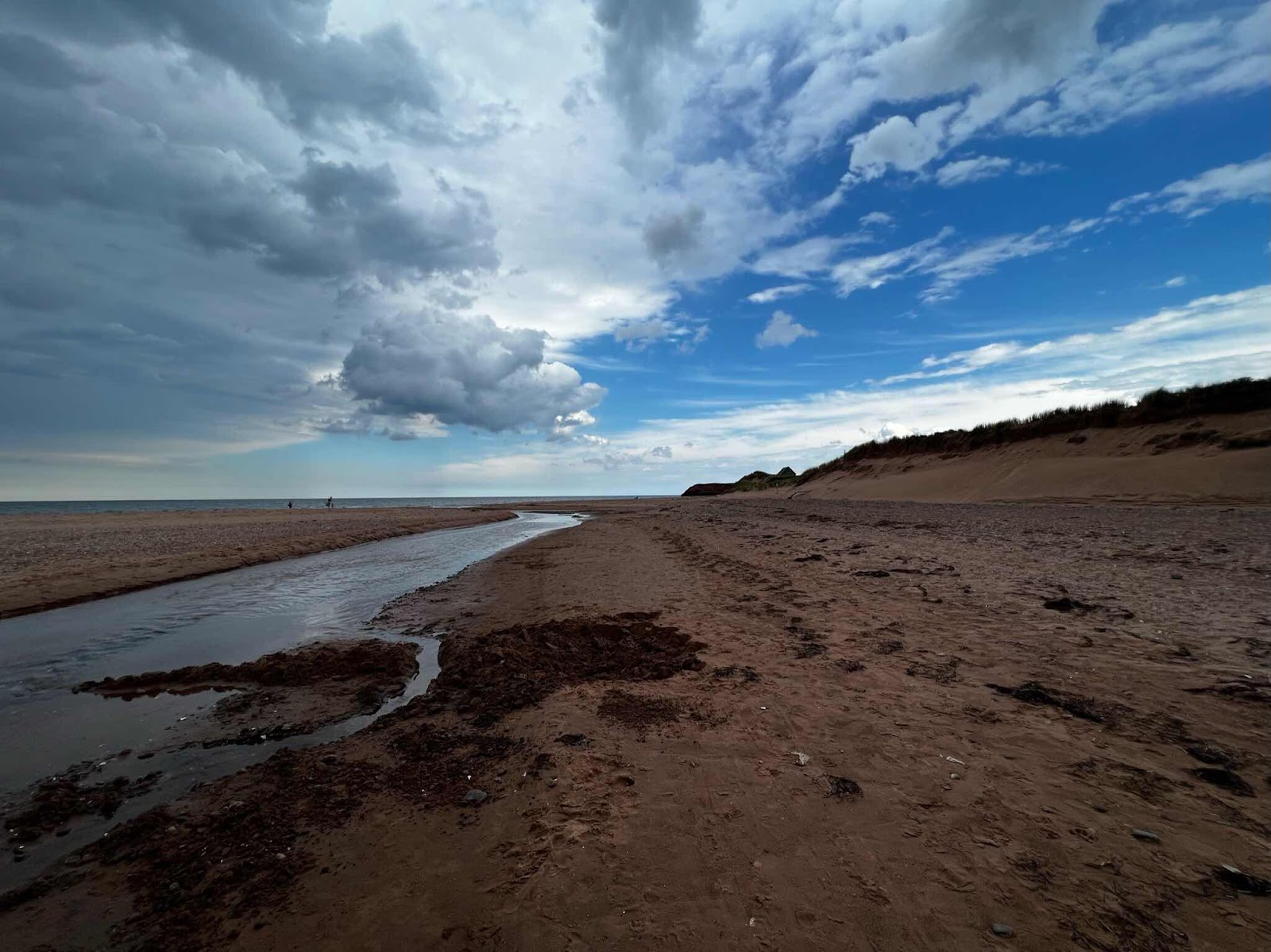 These are our daughter’s photos, taken with her cell phone.

The family started to pack up when they heard thunder in the distance. 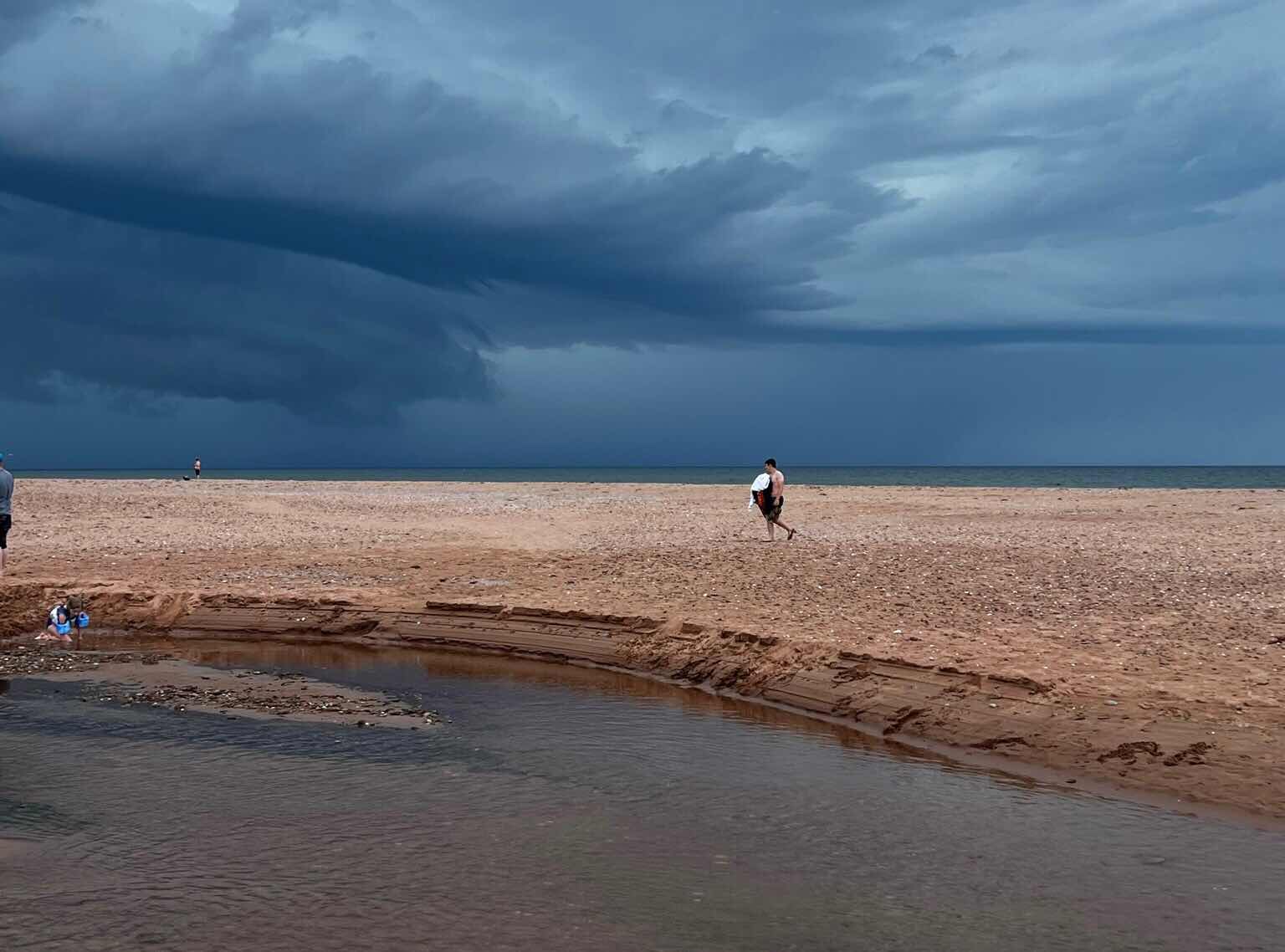 The sky darkened in minutes. 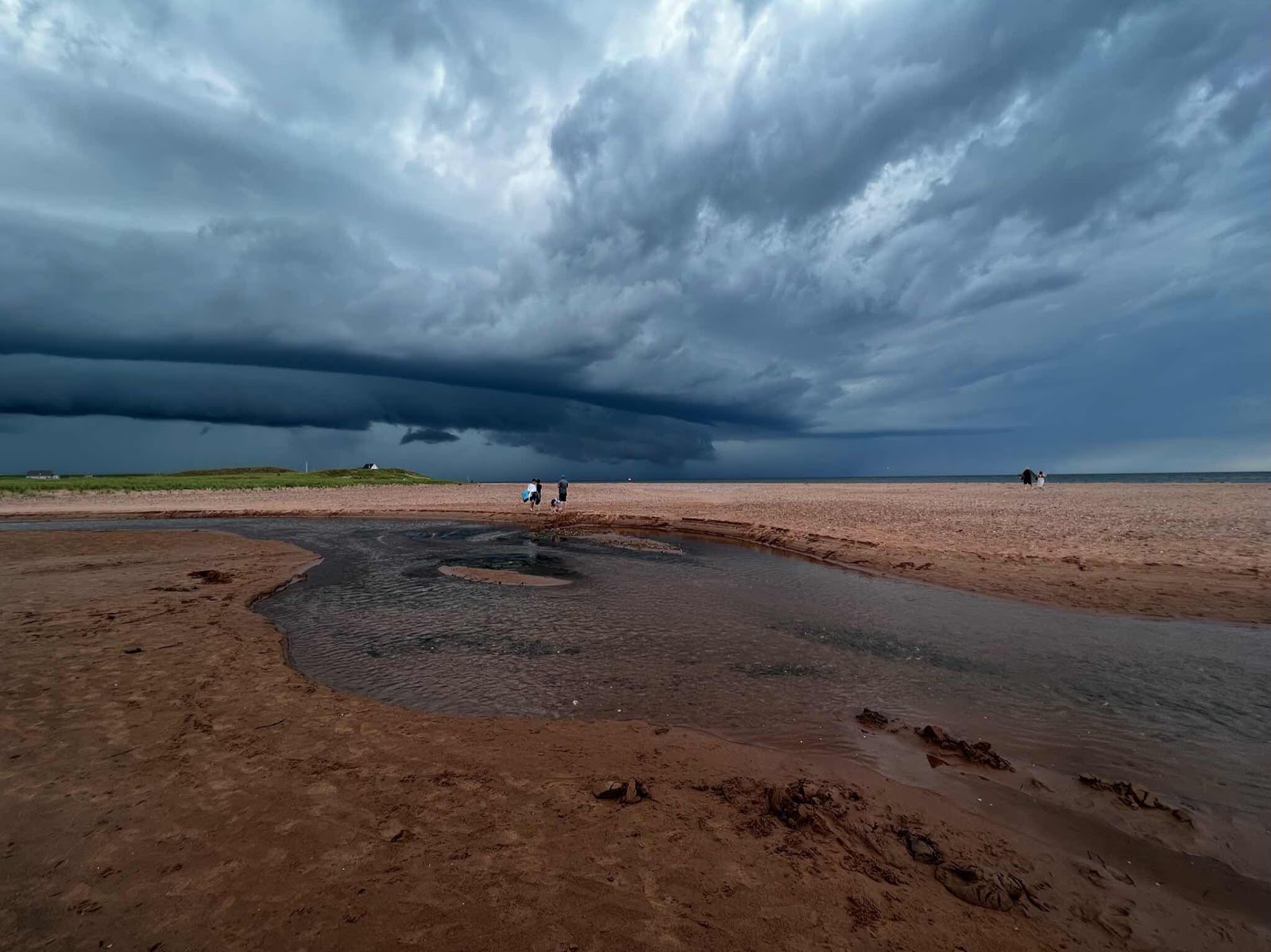 As they headed back to the car, they saw lightning flash through the clouds. The kids were scared. The drama in the sky continued 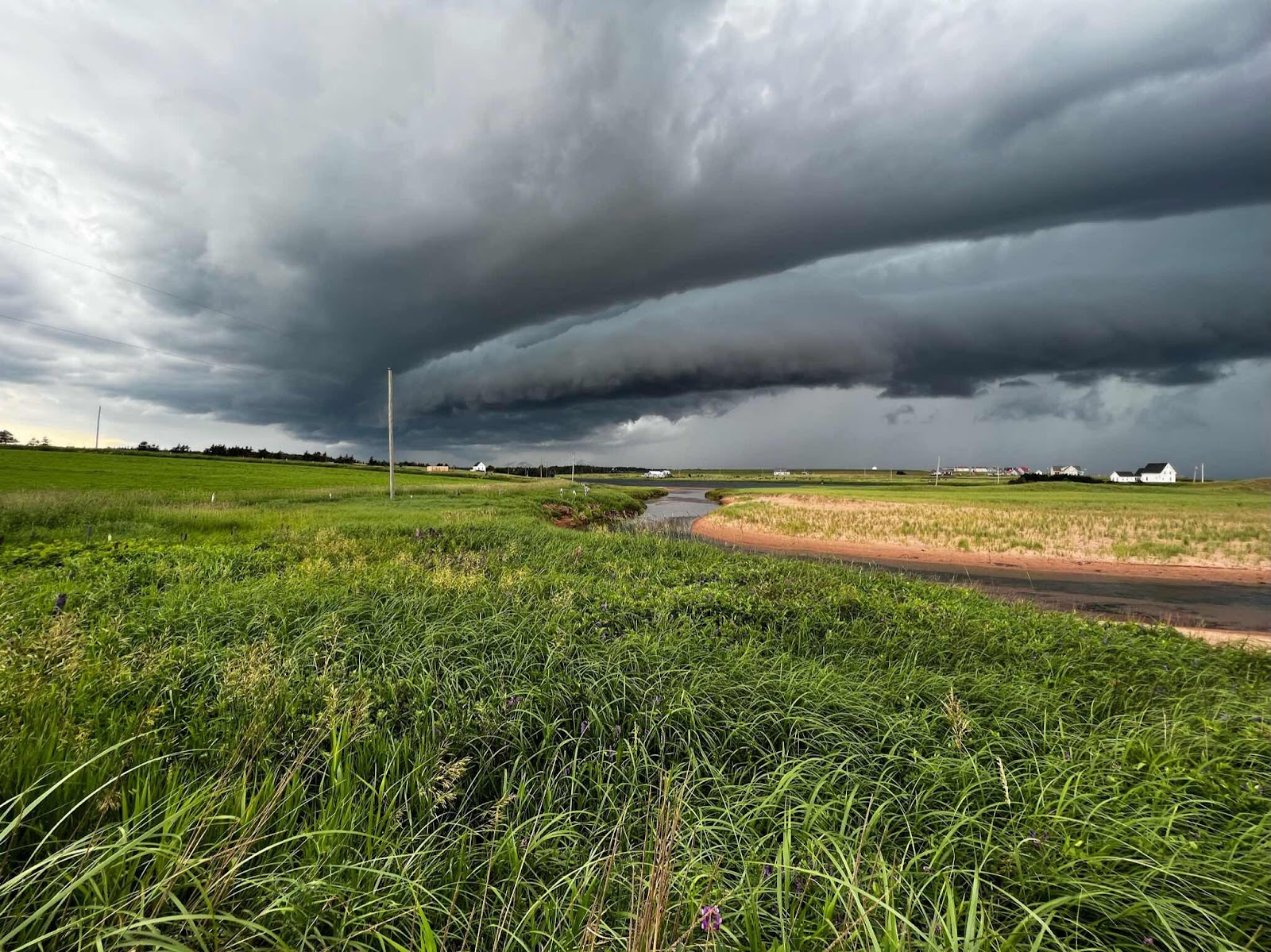 as they watched from the car. 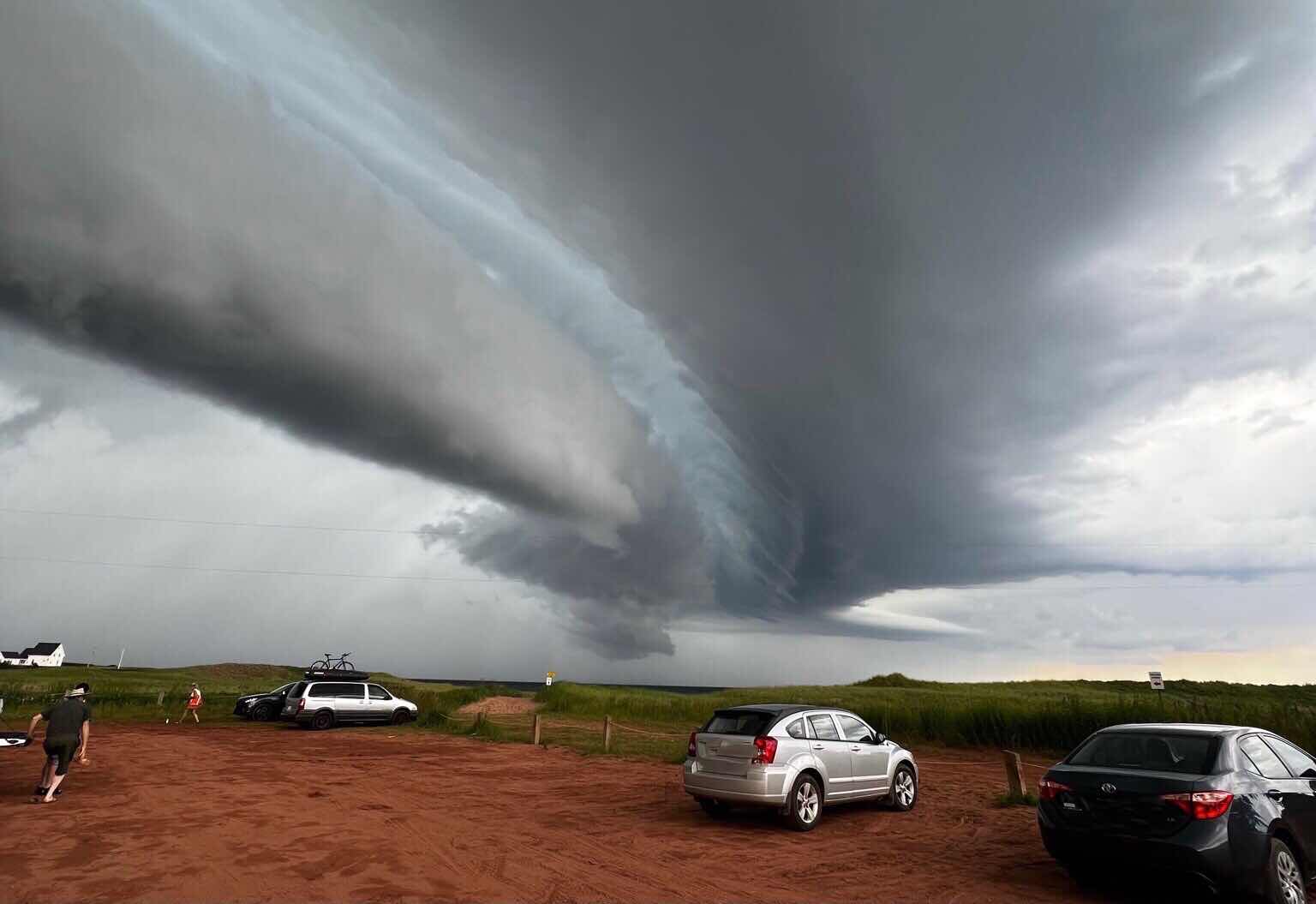 and slowly appeared to lighten and widen in appearance. 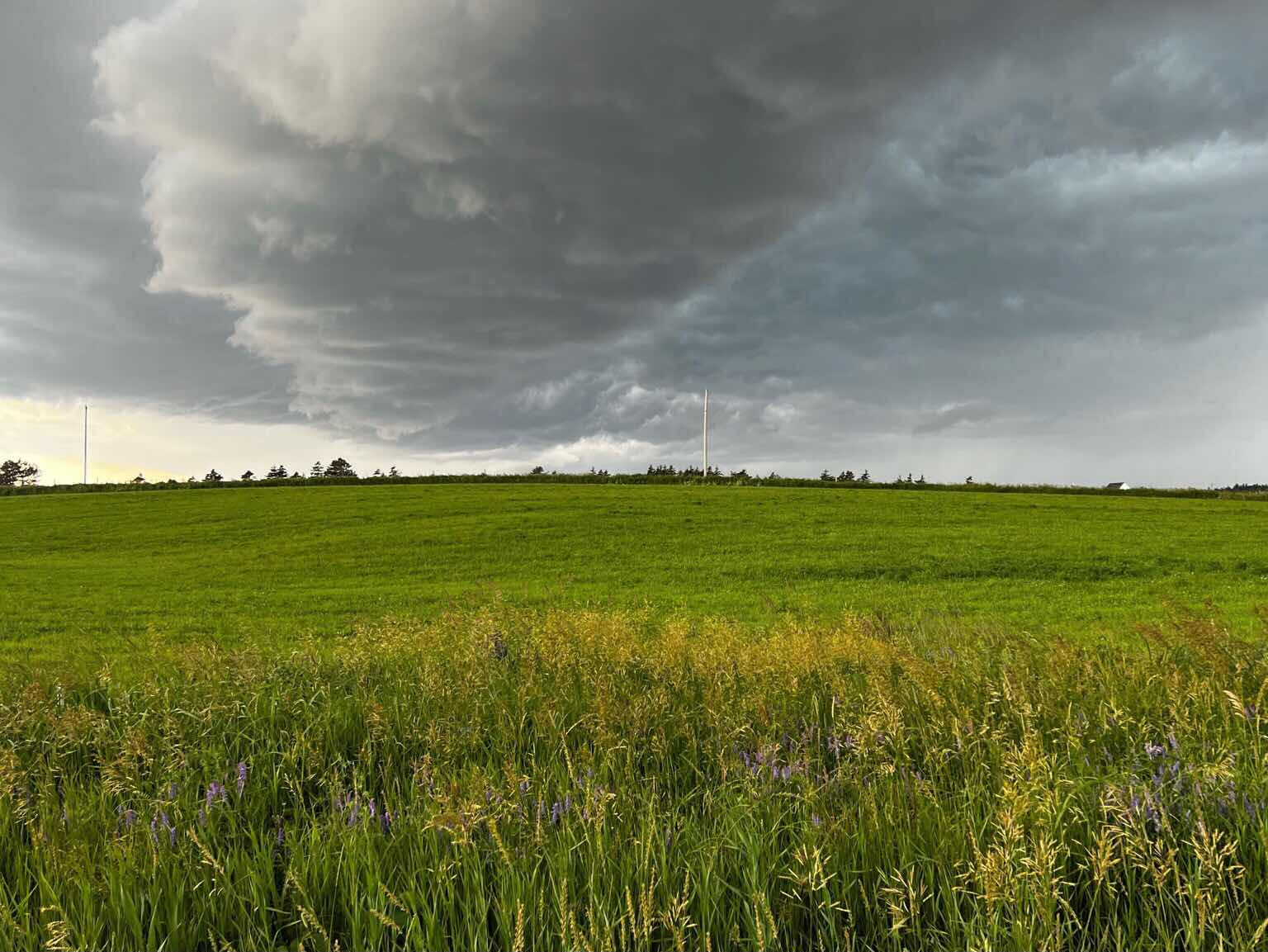 As they drove away from the area, the rain started. They were amazed at how quickly and dramatically the storm rolled in. Our family was lucky to have been close to the car park so everyone could get to safety.

Those are some threatening clouds, for sure. Glad everyone is safe. Great shots!

Oh my goodness, such dramatic photos.
Stunning, beautiful and a bit scary all rolled into one.
Thanks for sharing your daughters photos.
They are all perfect "wall hangers".
Sue

What an incredibly dramatic series. Thank you and your daughter. I am so glad that everyone stayed safe and dry.

Wow, those are amazing photos. It must have been both scary and fascinating to watch those clouds roll across.

Velva- Evening with a Sandwich said...

Love the photos! I appreciate a good thunderstorm. Great photos!

Hello,
Love the photos of the beach, lovely views of the sea. The sky photos are amazing, so dramatic and beautiful. Take care, have a great new week!

I'm glad your family could shelter in the car. Those pictures are phenomenal . Just amazing sky scenes.

Those pictures are absolutely beautiful. I love sky shots, anyway, but these are extraordinary. Glad everyone made it to the car safely.

Your daughter's photos are spectacular. I'm glad they were able to get back to the car in time.

How very beautiful. Glad they are safe - when the offspring turn up with this kind of photo, I get chills after the event. And the Offspring says, cheerfully, that she survived to bring the photos home. Yeah. GLAD they are safe.

Wow! These photos are wonderful and dramatic.

That's a weird looking cloud. Here we might classify it as a hail cloud.

What dramatic photos of an impending storm. I'm glad that they made it back to the car before getting soaked.

Spectacular storm photos. I'm glad the family weren't too far from shelter. It looks like the kind of storms you get sometimes with a cold front.

Wow, what cool cloud formations! I was amazed at how quickly weather moves in out there. It can be on you within a matter of minutes!

Your daughter's photos of the storm moving in are wonderful. We live in South Miami and we are amazed how in a matter of 20 minutes the sky can go from beautiful to ominous to total black and then boom! Thunderstorms.

WoW!!!! gorgeous images, especially for a cell phone!! as beautiful as they are scary, it seems like it happened so quickly!!

This is amazing pictures of a scary weather...wow! The sky is really dramatic!!
Have a lovely week and take care :)
Titti

Wow. Those a great pictures of a serious storm.

As I scrolled through these pictures I was looking for the right word … and then, I saw it right there in your description: *drama* in the sky. Congrats to your daughter for the excellent captures. I see she has inherited your gift of the photographer’s eye. 😊 It amazes me how fast it all rolled in. And those clouds … Wow!

Those are some great cloud formation.
Coffee is on and stay safe

The drama of the skies has always been fascinating to me. The photos are excellent and the entire post takes us through the storm. Thanks for sharing this.

What impressive photos of the summer thunderstorm...
good if you can get to safety quickly.
Hug

Stunning photos, thank you for sharing them. Mary

That is one very impressive storm front. Your daughter's images are brilliant.

I left a comment here, Marie, but as so often happens these days, it seems to have disappeared into the ether!

Those are some impressive clouds! It can be scary to be caught so quickly by a storm; one often hears of tragedies that result. I'm glad your family took cover safely.

I am mesmerized by these pictures!