There were two boys already, Fred and Melvin, so the arrival of a girl was probably a welcome addition to the family. Evelyn was born in 1932 and was the first of five girls born to Ernest and Bessie Smith of Corner Brook, Newfoundland. At that time, Newfoundland was in the grips of the Depression and times were hard. However, her father had a job as a relief officer in Corner Brook and he had a steady though possibly meager income.

Evelyn, as the oldest girl helped with the younger children and the housework as she grew up. The day the youngest child, Marie, was born, Evelyn took the younger girls, Beryl, Janet and Mavis out of the house while the mid-wife delivered the baby. Then by the time Marie was seven, in the early fifties, Evelyn left home to join the Canadian military; Newfoundland joined Canada in 1949.

While serving in the Air Force, Evelyn met her future husband Len Hole. After they left the military, the couple moved to Medicine Hat, Alberta where they raised their family. Over a sixteen year period, they had ten children:  six boys and four girls. They are

Terry writes, for most of our growing up we lived in a tiny three bedroom house in the flats area of Medicine Hat. In addition, what I would like people to know about Mom was that family was everything to her. 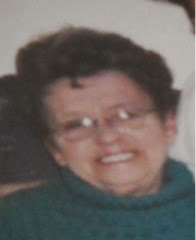 Feeding ten children was not easy and Evelyn, a stay at home Mom, worked banquets with the Ladies Auxiliary of the Royal Canadian Legion to make ends meet. Evelyn cooked and baked for her family and one of the meals she made was called Shipwreck, a popular meal in Newfoundland. The name of the meal was unusual for the heartland of Canada, almost as far away from a shipwreck as you could be in the country.
Tami reports, Mom lost her Newfy accent but when she got mad, it came out. It is hard to lose completely the essence of the place you were raised even if you are away for decades.

With respect to Evelyn's attitude towards life, Terry writes, I think she came from a generation where you persevered and made do with what you had.

This attitude makes perfect sense when you consider the times in which Evelyn was raised. People were starving during the Depression. The Newfoundland government did not have the resources to provide much for its people. If you snared rabbits for food because your family was hungry, others could report you and your dole (welfare) would be cut. People were desperate but had to "make do with what they had." What you see as a child is sometimes how you live as an adult as well.

It must have been unusual for a young woman raised near the ocean to be so far inland in western Canada. As the children were born and her family increased, it became impossible for Evelyn to go home to visit, especially considering the cost and means of travel across the country at that time.

As Terry writes, although she never said it, I know it was painful for her to be so far away from her family. I remember the first time Uncle Fred came for a visit, she was so surprised and happy as he just showed up one day.

A year after his father's death, Terry and his wife, Cheryl, flew Evelyn to Ontario where she re-connected with her youngest sister, Marie. The sisters had not seen each other in fifty years. As Terry describes it, I think this was one of the most special times for her. 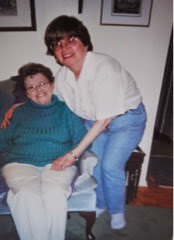 As so often happens, just as someone has an opportunity to enjoy life, illness strikes. Shortly after her visit to Ontario, Evelyn was diagnosed with cancer. Two years from the day of Len's death, she died.

Thank you to Tami, Terry and Aunt Marie for the information about Aunt Evelyn.


For a recipe and history of Shipwreck dinner check here.
Posted by Marie Smith at 16:40

Great job Marie.I know Evelyn;s children will be glad you wrote it.