It is finally too cold for wasps when we are out in the garden or on the patio. On a trip to the park with our granddaughters just a few weeks ago, 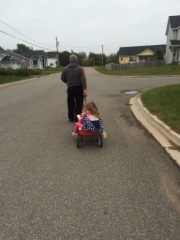 Sylvie was stung by a wasp which was attracted to her peanut buttery fingers as she sat in the wagon on our way home. 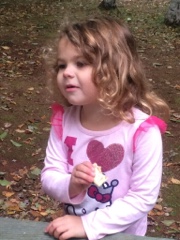 In an effort to discourage the persistent insects from their pesky pursuits on our patio, we bought paper wasp nests which act as deterrents to the yellow and black pests. Wasps will stay away from an area where there is another nest.
Sure they will! 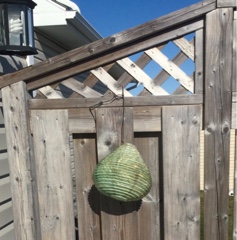 When we last used the paper nest, wasps were drawn to it and looked as if they wanted to take up residence; they were moving into a bigger condo and telling their friends.
The only benefit to the paper nest was that the wasps were periodically occupied, leaving us alone for a few minutes. Numerous wasps were so persistent in their attack one day, we had to escape into the house. Finally, we surrendered the deck to them, declaring it off limits until the pests disappeared for another year. Then it was too cold to use the patio.
Years ago my father renovated our house in Mount Pearl, Newfoundland. My new bedroom had been the kitchen and the bed was against the back wall of the house. Morning after morning, I complained that I heard buzzing, from bees or wasps, late night and early morning. The buzzing was loud, though it did not sound like the creatures were in my room. 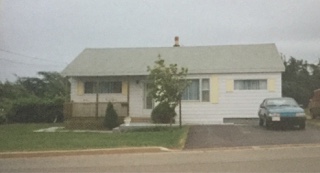 Several weeks into the buzzing nightmare, Dad discovered that the exterior wall of the house, near the area of my bed, had a wasp's nest in the old dryer vent which was still attached to the house. The wasps did not want to leave the protected nest either. Dad had quite a job to get rid of it, eventually smoking them out.
Now, the wasps are gone for another year. We lament the loss of the warm weather but not the pesky insects. Chances are new wasp adventures await us next year.
Posted by Marie Smith at 15:43

I think the wasps watch my patio door and wait until I set up the chairs and bring the food out, and then one of them blows the whistle and they all appear at once! I haven't tried those paper wasp nests, but you are not giving them a very good review!

Fascinating how they sense the food from wherever they are.

Thank you for your sweet comment on my latest blog entry. I am fascinated to be writing to someone who lived in Newfoundland. My sister and her husband moved there back in 1960 from Cape Cod, Massachusetts but only made it for 4 years. He was a psychiatrist and they actually brought a young girl back home with them. They were going to adopt her but she got too homesick and went back. I can't wait to go back and read your other entries. (I'm allergic to bees so have no comment!)

Wasps are a plaguey nuisance as my father used to say. We paid to have a nest under our porch exterminated last year after consumer solutions didn't do the trick.

Plaguey nuisance is a great description. Your father was on to something!

Perhaps you can try one of the wasp jars that trap them with some sweet stuff. They are even pretty jars.

I will give it a try next summer. Thanks for he tip.

Ugh.. wasps! One year we had them in the basement.. also a dryer vent issue. I went down to put laundry in the washer and there were three wasps zooming around. By the time I was ready to dry the load, there were dozens. The basement was unfinished at that time and the light was one of those suspended light bulbs with a string to pull on of off. Seconds before I would have grasped it to turn it off, I glanced up and saw that it was pulsating with wasps. Gah! Exterminator was called.. tiny wasp carcasses were found regularly and for months. I'm glad you're done with yours for the year. Too bad it's at the expense of warm weather.

I would have nightmares about that Hilary. Thank you for visiting.