We had occasion to look after our granddaughters one day last week. We did the usual things, arts and crafts, and a visit to the playground. 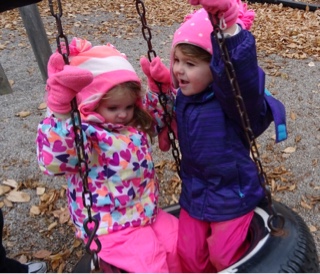 But one thing the girls love to do is play dress-up and at our house, the dress-up items are the clothes they bring with them, including underwear.

The oldest, Sylvie, thought it was fun 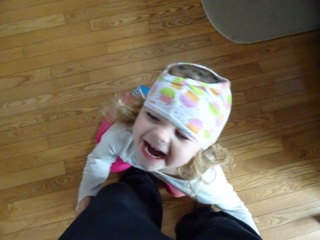 to put the underwear on her head. Then she tried it on her sister. It was hilarious! 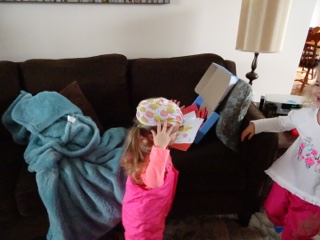 There was a time however, when some women in Newfoundland wore underwear on their heads when they made bread. We had no direct experience of this in our families, but we knew about it.

When we worked in Buchans, Newfoundland, the students discovered that Rick was the bread maker in our house. This was forty years ago and not a common practice among the miners in that town. One boy was curious about Rick's attire whilst making bread. He asked, "Do you wear your own underwear or your wife's on your head when you make bread, Sir?"

Rick was perturbed by the question. He asked the boy, "What are you talking about?"

"Mom puts underwear on her head when she makes bread," was the reply.

"Oh!...there isn't any underwear on my head when I make bread," said Rick.

When Rick told me, we laughed of course. That's one way for a man to wear women's underwear.

It is a good thing that hair nets came into fashion in the food service industry, don't you think?

Mrs Morey,our neighbour always wore a pair of the kids underwear on her head while making bread. She had nine children so wore them almost every day.lol

Lol. She made bread every day with nine children to fill. Hard working woman with Newfoundland headwear!

To keep hair out of the bread? Or to keep bread out of her hair? I often make bread.... hmmm.... must check the underwear drawer.

To keep hair out of the bread I thought. Lol.

Yes.In place of a hairnet. Some women tied a scarf around their hair but most resorted to a pair of drawers!

Children love dressing up and they are so inventive.
As for bread making, well I bake bread from time to time, but I could only imagine what my better half would say should she catch me wearing her knickers on my head!

It would be an interesting conversation though! Lol.

Or as our girls say, "Nickers." Their British father has influence too. They hear drawers from us.

The kidlets are adorable. :)

A cute post. The girls are adorable and hair nets can indeed look like fancy underwear ... but I wonder how the young boy knew that? Hmmmmm.

His mother wore underwear on her head when she made bread. I guess he thought my husband did too. Seemed normal to the boy!

Ya bunch a crazy newfies.

Lol. Not so crazy. Masters of improv.

Looks like you had a ball!!! So lucky to get to spend time with the beautiful grandchildren.....we are expecting our first in February----pinch me!!!! we are over the moon.

We can't imagine life without them.