Since the recent terrorist attacks in various parts of the world, there have been repercussions, as attacks against Muslims living in our country have occurred. Our government is bringing refugees from Syria as well, and there are mixed feelings among Canadians about this move. Social media can be an avenue for hate speech. Fear can make people say and do terrible things that become their own form of terrorism. However, a simple encounter can open our minds to others. My husband, Rick and I had such an encounter. I've written about it before but it is worth another look in this current climate.
It was pouring rain as we waited for the bus. The trip from Vienna to Prague 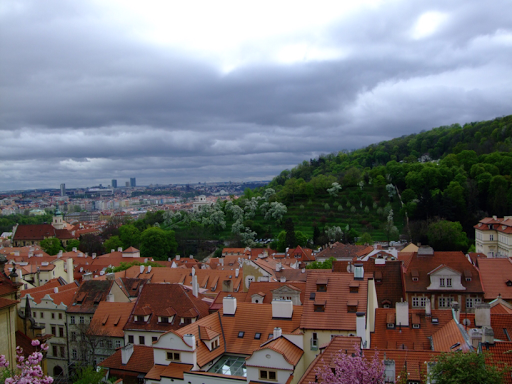 had been uneventful but after a day of walking around the city, 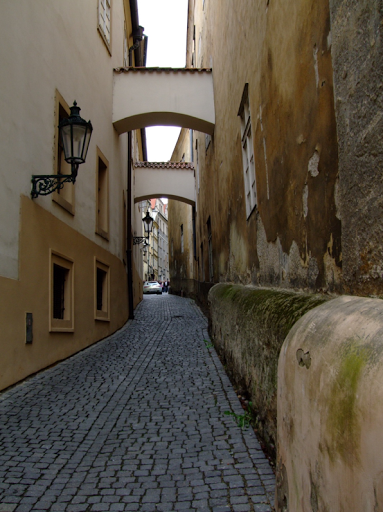 including a tour, then sightseeing on our own, 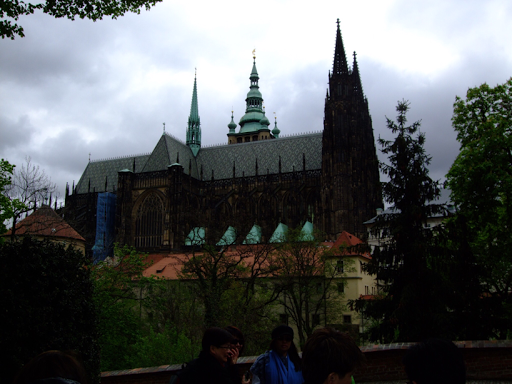 we were ready to head back. 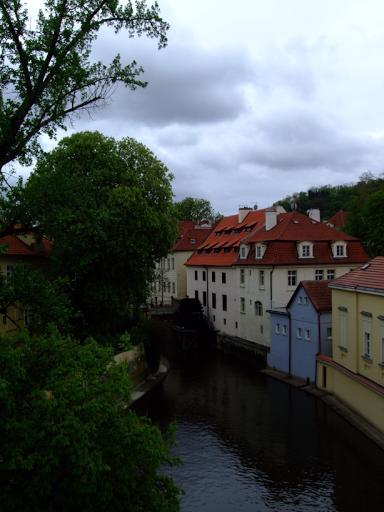 Meanwhile, it poured, but we had our umbrellas.
We stood under the eave of an old building but it was raining so hard that our feet were soaked from the water pouring off the overhang and the umbrellas. Then a young couple stood in front of us, getting soaked as they stood waiting with the group. I felt for them and tapped the young woman, wearing a hijab, on the shoulder. She accepted the offer to share my umbrella and the ride back to Vienna became much more interesting than any tour could provide.
They were a young Kuwaiti couple; he was a student of engineering in Cardiff, Wales. They were in Vienna on vacation, taking day trips to neighboring cities as were we. As a young Muslim couple, they always researched the city they visited to find places to eat which followed their dietary laws. We looked for places frequented by locals.
Lucky for us that day there was a huge traffic jam, so the trip back to Vienna was much longer than usual. This gave us more time to talk, which we enjoyed. We learned about life in Kuwait, how it compares to Saudi Arabia, and their experience in Cardiff. My husband, Rick and I had been to Cardiff the previous year so we shared our experiences with them as well.  We talked about life in Canada and our part of it, Newfoundland, at that time.
Our lives were very similar. While our cultures, religious beliefs and environments were very different, it soon became evident how much we had in common. Family was as important to them as it was to us. They valued art, music and literature, as well as science and history, like we did. What made us similar was so much more than what separated us. Four people who shared umbrellas figured that out in a few hours on a bus.
Borders meant nothing to us. Politics was meaningless. Learning about each others' lives was all that mattered.
Umbrella anyone?
Posted by Marie Smith at 11:30

Thanks for sharing this great experience. As for Wales, we have recently watch Hinterland on Netflix. There were 4 episodes in season 1. Season 2 isn't on Netflix yet. It was quite interesting although I found the accent hard to follow.

The longer you hear the accent, the more you understand it I found. It is hard to understand at first. Then again, there are people who don't understand Newfoundlanders with our regional accents.

I agree with you that hatred can be spread via social media. I do not have a Facebook account, nor would I want one. Far too much hatred and bile for my liking.
To judge a person solely because of their race, creed or colour is in my view ignorance in the extreme.
As to the refugee crisis, I don’t know what the answer is, it is certainly a horrific situation.

No easy answers for this one!

What a wonderful post. I wish that everyone could realize that our sameness bonds us.. and our differences are worth celebrating. We're such a fear based society in some ways. I'm glad you were on a slow moving trip. Yes, I'll share an umbrella, please. :)