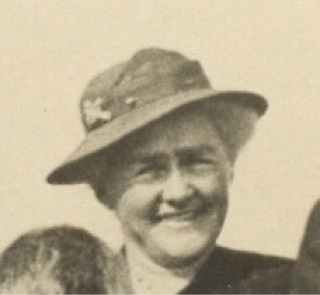 Clarinda Moulton Mercer
Clarinda was from Burgeo, Newfoundland. This locket is an interesting item for several reasons.

Clarinda's father, Thomas Moulton, was the fish merchant in Burgeo. 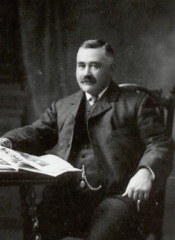 Thomas Moulton
The merchants controlled the lives of people in the community. They determined the price of the saltfish that the fishermen worked all season to catch and cure. Then they sold goods to the fishers, who used the value of the catch as payment for goods. For a fishing family to have cash was unusual. Often they owed money to the merchant, who valued the fish and the goods they bought.

It would be rare for a fisherman's daughter to possess such a locket. Her family would have difficulty to feed and clothe the children, leaving nothing for jewelry or anything that was not essential for survival. Clarinda's family was wealthy for that time.

The gold locket has what looks like initials M M engraved on the front. 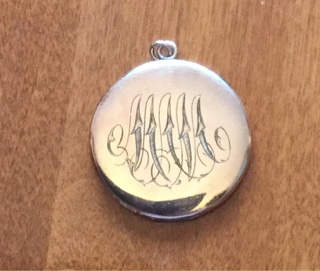 On the back of the locket is a clover leaf, in green stones inside a heart of stones. 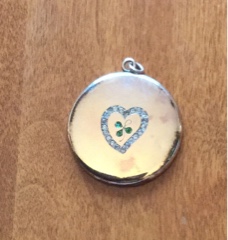 Within, there are two pictures, one of Clarinda 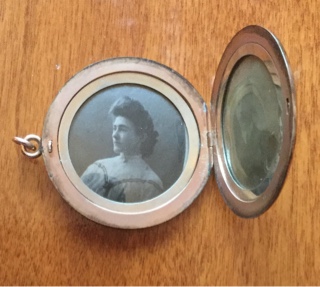 and one of her brother, Edgar, a soldier in the Newfoundland Regiment, 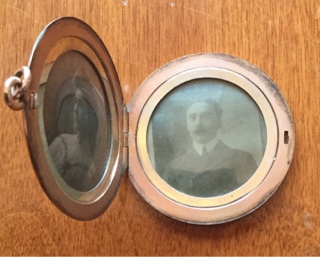 which fought with the British in the First World War. He died November 22, 1917 from wounds inflicted in battle.

Today, ninety-eight years later, Edgar is one of the people we remember on this day. He paid the ultimate sacrifice. His sister remembered him during her life and in the years since her death, her family has taken up the torch.

Today is the two year anniversary of my first blog post. It too was about Remembrance and includes a photo of Edgar.  Here is the link.

Next year will be the one hundredth anniversary of the Battle of Beaumont Hamel, a part of the Battle of the Somme during that terrible war. During that fight, the Newfoundland Regiment, with approximately eight hundred men, went "over the top" of the trenches on July 1st. One hundred and ten survived with only sixty-eight answering roll call the next morning. It was a huge loss to the colony of Newfoundland.

A special commemorative piece called Sing You Home-Remember Them at The Rooms, done for the one hundredth anniversary of the battle, is a beautiful way to remember the Newfoundland Regiment and those who fought for king and country.

The link to Sing You Home is here.

We will remember them and all the brave men and women who fought for our freedom.
Posted by Marie Smith at 16:48

Someday, you need to coalesce these posts in print form.

Trying to do that but it's not so easy. Thanks for visiting.

What a beautifully-written post on this special day. Thank you for sharing it with me.
That locket is splendid.... in more than one way. This post ouches my heart. Truly.

What a beautiful keepsake for Sylvie and Caitlin. I imagine them relating this story to their grandchildren.

I've started to tell Sylvie about the stories. I hope they live on through the girls.

It is 11/11 as I write this ... our Veterans Day. It's nice that Edgar was/is remembered so well ... we lose so many youngsters due to senseless wars.

It's called Remembrance Day in Canada. War is fought by youth and we lose them so senselessly. A day to ponder the sacrifices!

I visited the battle grounds and the cemetery at Beaumont Hamel and paid tribute to the men of the Newfoundland Regiment when I was in France with my 2 sons a few years ago. Beautifully kept.
Today I am remembering my mother's young cousin, Jack Chandler, killed in 1917 in France. We visited his grave too. Probably the first family members to do so.

Thank you for sharing. I would love to see Beaumont Hamel and the place where Edgar is buried.

What beautiful lockets and what a fascinating history. I very much agree that we should never forget those that made the ultimate sacrifice. I had a lump in my throat as I observed the two minute silence on Remembrance Day.
Thank you for the video link to “Sing You Home”, I found it very touching.

Thank you for visiting!