The river flowed freely in spite of the sub zero temperature as the pair swam five meters from the bridge. People, gathered to watch the avians, did not disturb their reverie. The drake had an iridescent green head with a white choker-like circle around his neck. He had a flat yellow bill, gray back, black rear and brown breast. His legs were bright orange. 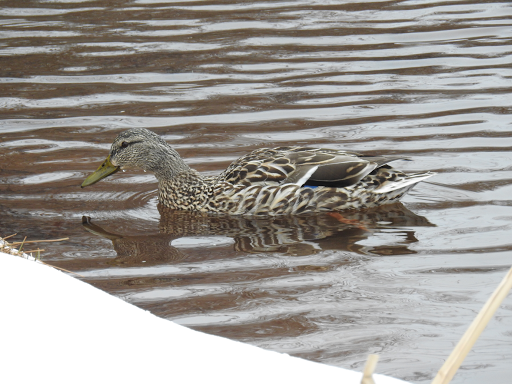 Mottled brown, the hen had a larger, mainly brown feather on her sides. Below that feather, one can see a hint of the blue visible when she is in flight. Her bill is a drab green colour while her legs are bright orange. She is a large bird and the brown outline on the feathers of her back and sides looks to have been painted by a brush. 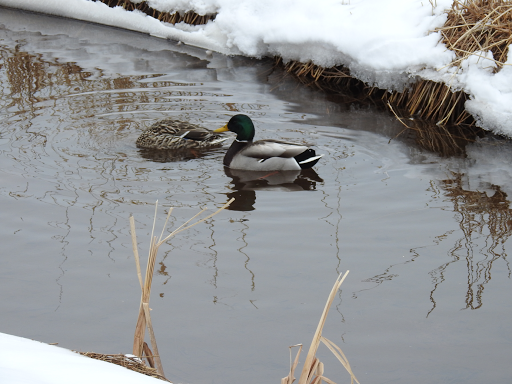 Mallards are dabbling ducks, dipping their heads underwater to feed. The female was the only one feeding on this occasion, dipping below the surface occasionally as she swam with her mate. 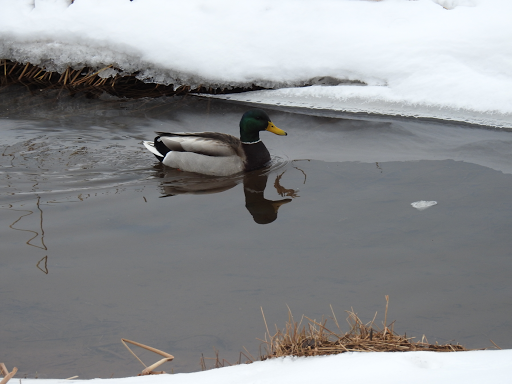 This pair probably found each other last autumn and recently returned from warmer climes where they migrate annually. The female will incubate the eggs and care for the ducklings herself. 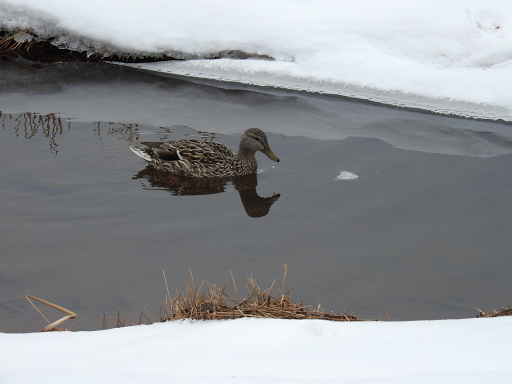 The male makes a quiet rasping sound while the female makes the traditional duck call. He was communicating with her for a time. She let him talk, without comment. 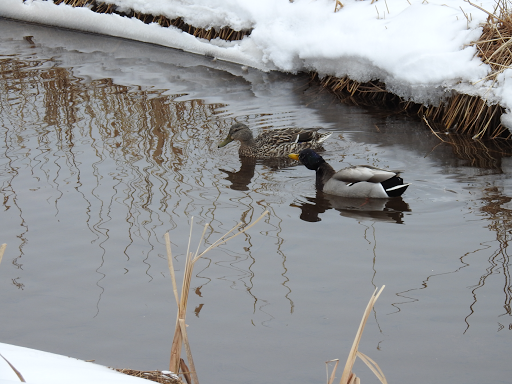 Sometimes you don't need to say anything. Wise bird!

We took the following photos a week later. The sun made a huge difference to the scene and some of the snow had melted. The pair swam closer to the bridge on this occasion. 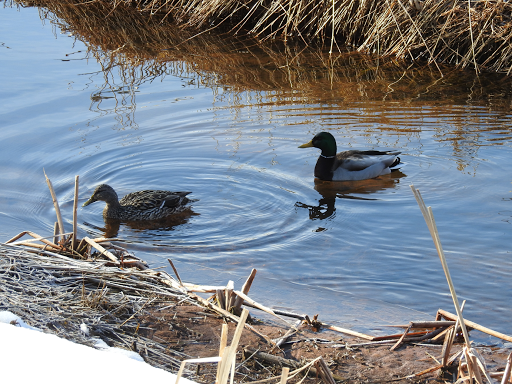 The mark in the center of the hen's beak was obvious. 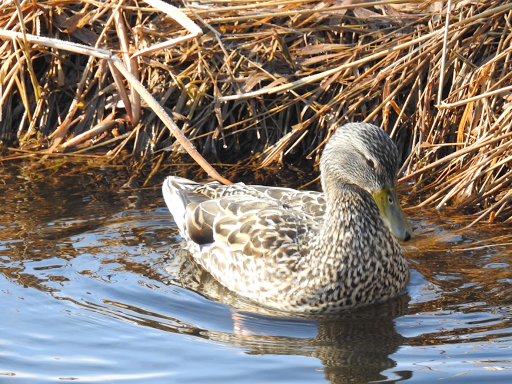 The drake had the same mark. 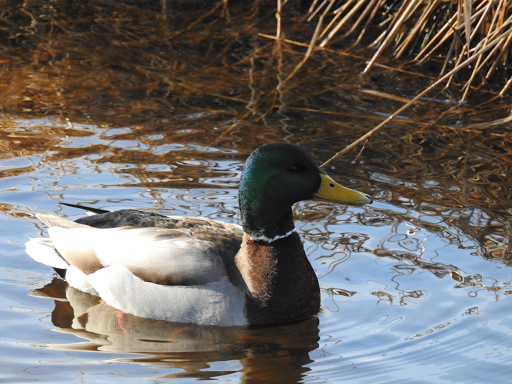 My favourite photo shows the sky reflected in the water and the hen in all her glory. 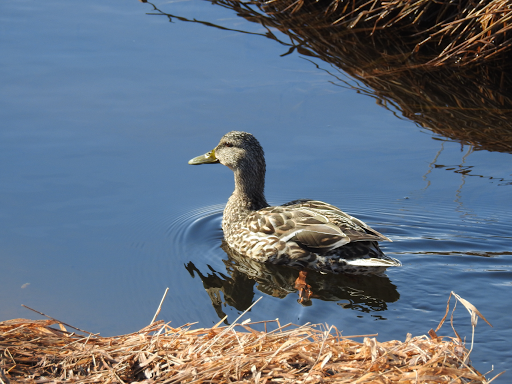 wonderful pictures, Marie. I love these pretty ducks and you told a good story about their love affair. :-)

They're by far our most common duck around here, though I still find them endlessly fascinating. Your pictures do this overlooked beauty full justice.

beautiful mallards!! this time of year, the landscape changes daily. today, it is so warm outside, i have to keep the windows closed - it is much cooler in the house!!!

The third one from the bottom is my top pick. So pretty.

Beautiful things.
I could feel my tight muscles ease as I scrolled through your prose and photos. Thank you.

Neat colorings on those ducks! I have been seeing some around here and they are neat to see. In Delaware we had lots of geese so I am enjoying ducks now! Andrea

They are beautiful creatures, Jan.

Thank you, John. They are among my favourite birds.

We have the windows open at night, Debbie. It is warmer in the house here though.

It is so peaceful to watch them in their habitat, EC.

Ducks are curious creatures and so beautiful, Andrea.

if I lived there I would pass some time looking at the ducks! They are beautiful!

Some pictures of a brood of ducklings soon, I expect.

Nice study of mallards. They and the Canada Goose are all that I seem to see here.

They are fascinating, Angela. We spend lots of time watching them!

I hope so too, Shammickite. However there is a den of foxes nearby. I fear for them! Such is nature!

Lots of entertainment with those creatures, AC.

They're a common duck seen in many places yet enjoyable to watch gliding through the water. I was concerned about the pair in our pond because if she lays eggs on your property they must be protected until they hatch and the family moves on.

Judith, wouldn't it be hard to protect them? We would worry about them.

You got some really amazing shots of these birds! It was nice to see them up close, just as if we were there standing on the bridge with you :)

This would make a darling wee book to share as a bedtime story with little ones, Marie. How precious.

Thank you, Marilyn. I enjoy watching these creatures so much.

It is a great idea, Ginnie. A story out ducks would be great!

Gosh! We don't get to see Mallards anymore unless we travel out of Hawaii. These are such beautiful birds.

They are gorgeous although I think Hawaii might be worth not seeing them regularly.