Comedy by the sea revisited

Every September we take in a comedy show at the village of Victoria by the Sea, Prince Edward Island. The little village does not change much from year to year. A new house on the corner, 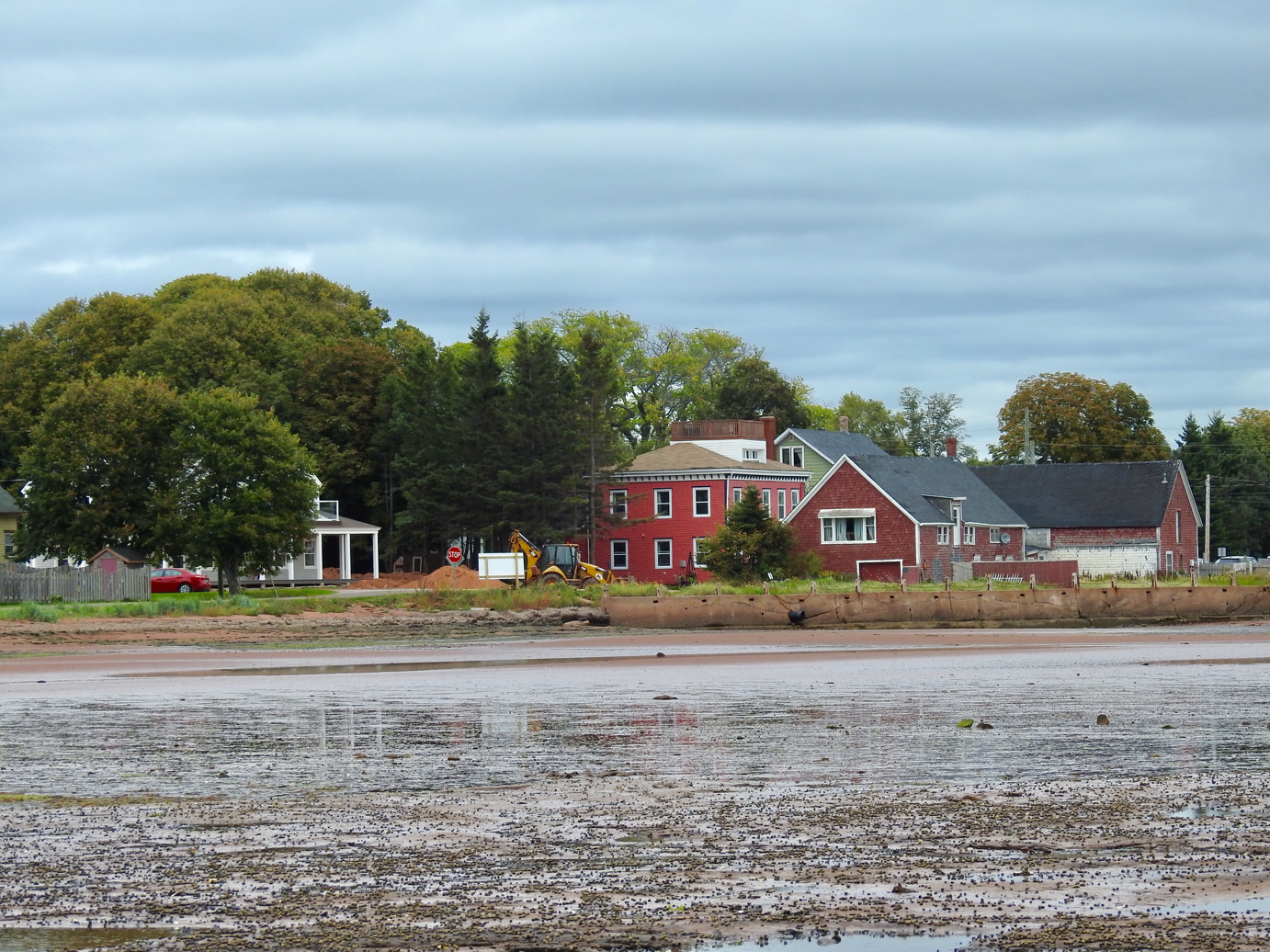 a new paint job for another house are among the changes this year. But, the village looked different because of our new vantage point.

This year, the tide was low, so we ventured along the beach 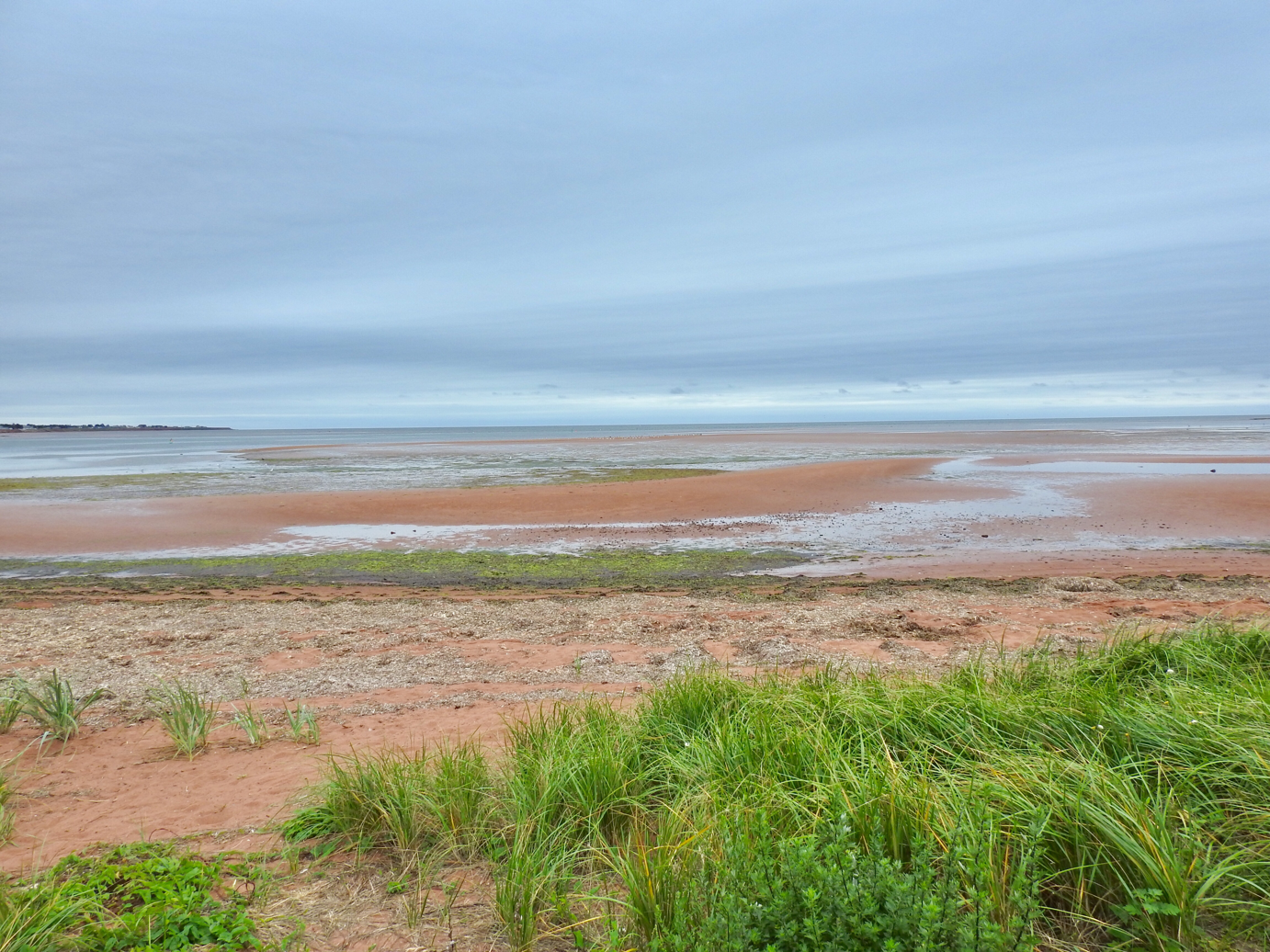 and onto the exposed sand bars to see the village from what has been the sea on our previous visits. The red sea floor was covered with sea snails or periwinkles, seaweed and barnacles. 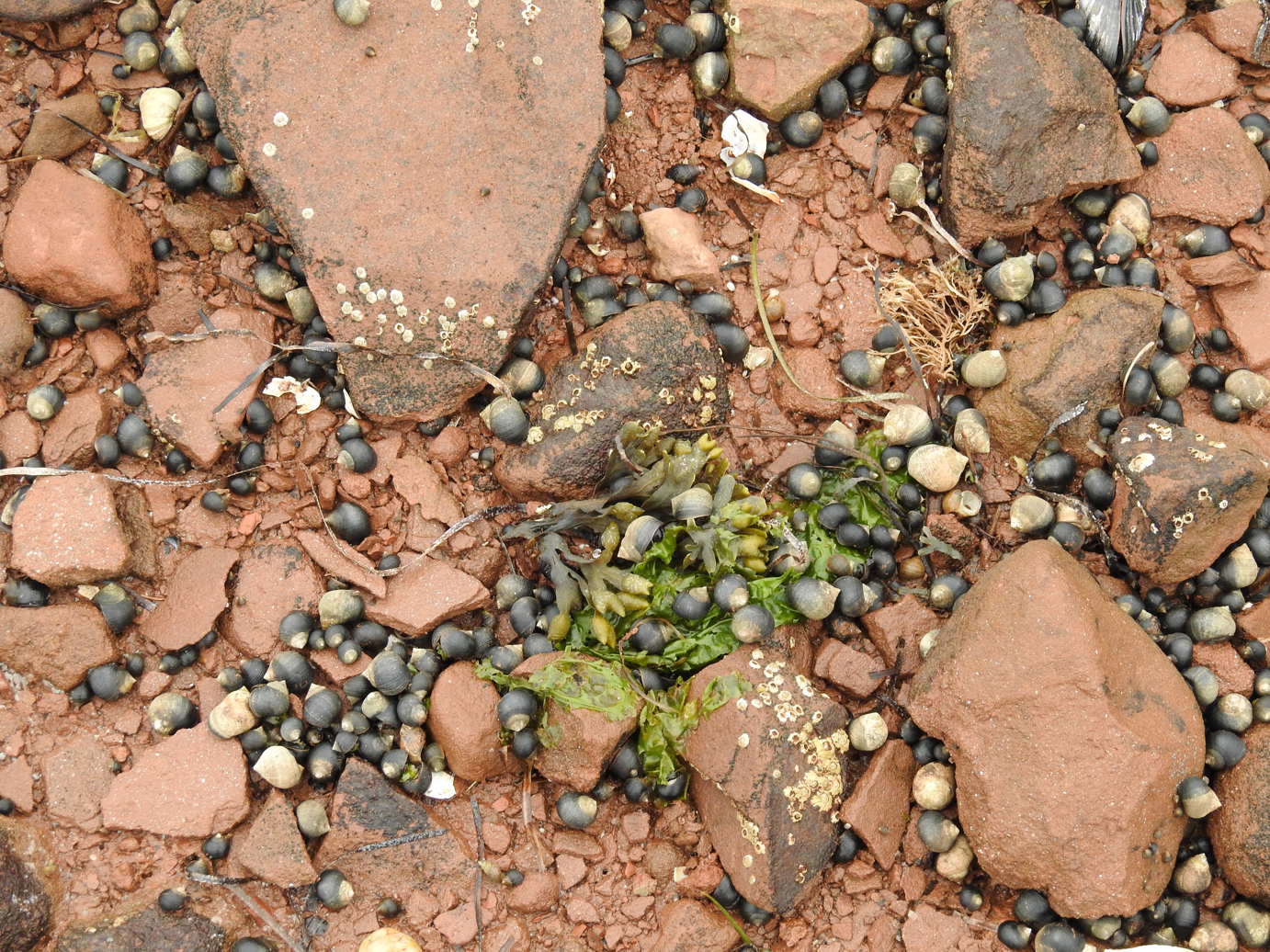 Along the water, a yellowlegs foraged for lunch, while a flock of cormorants rested nearby. 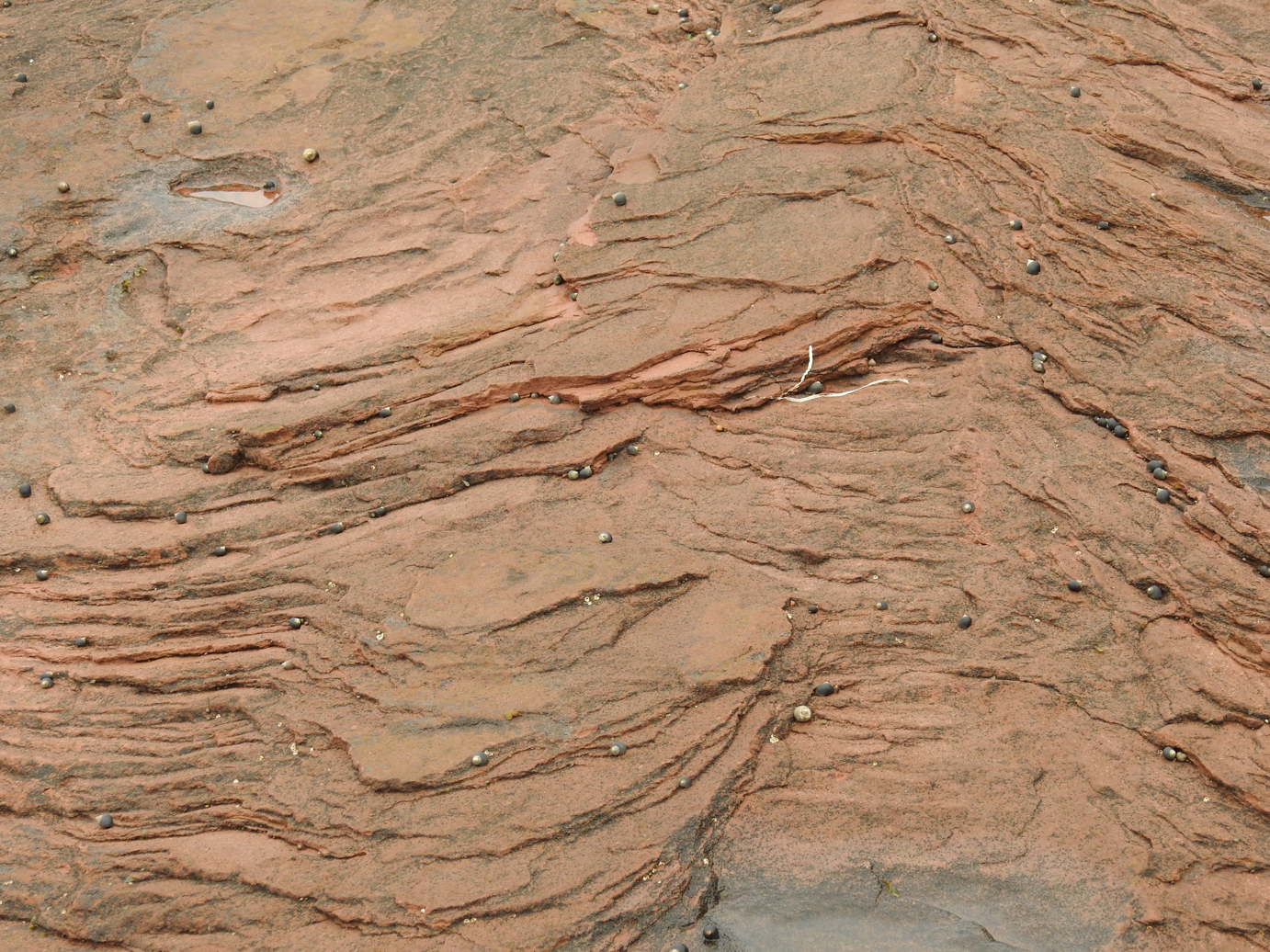 Looking to shore, the wharf, with its restaurant and gift shops appeared small in the distance. 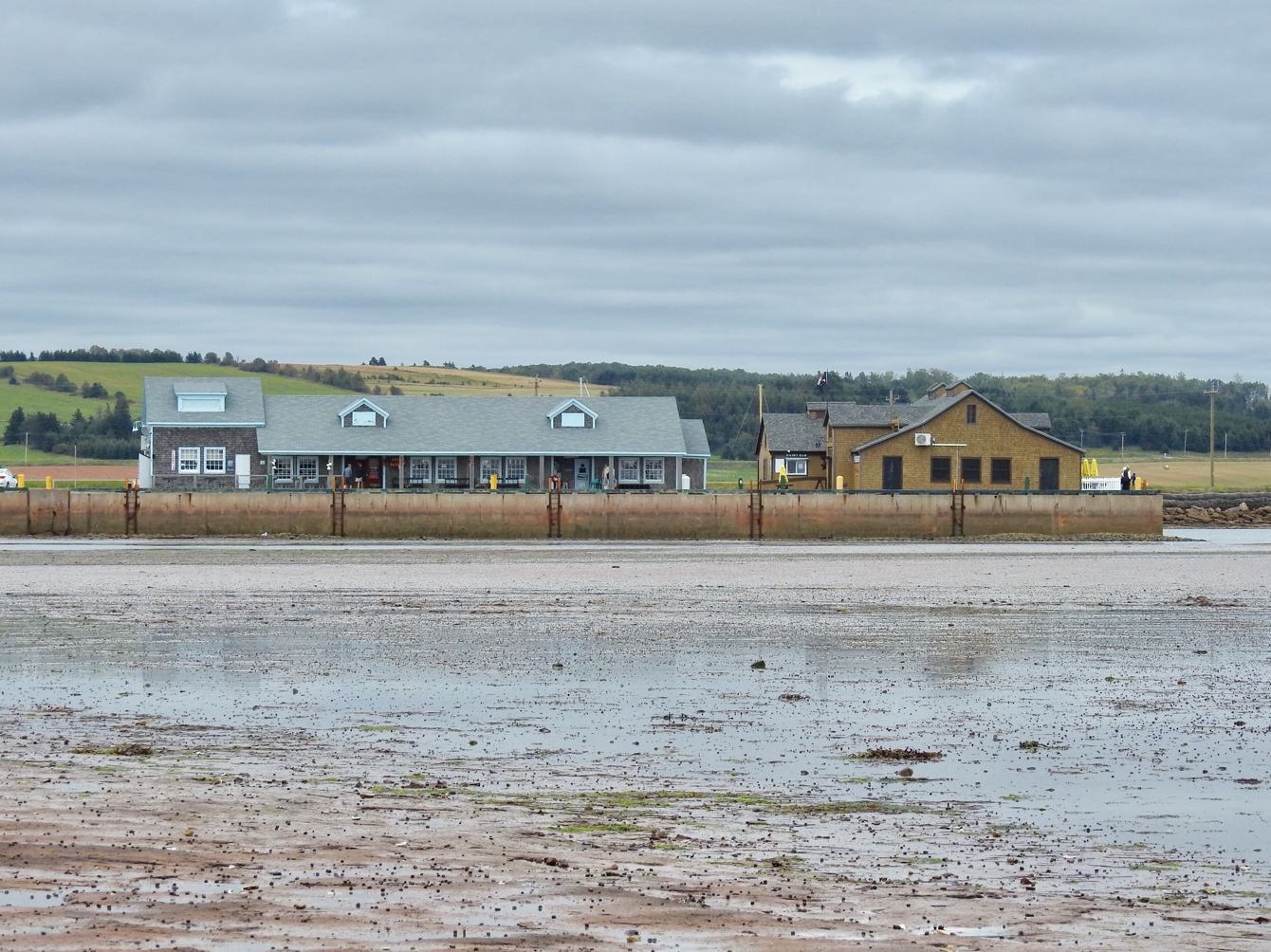 Later, on the way to the theatre, this colourful door caught our attention

as did this plant stand. 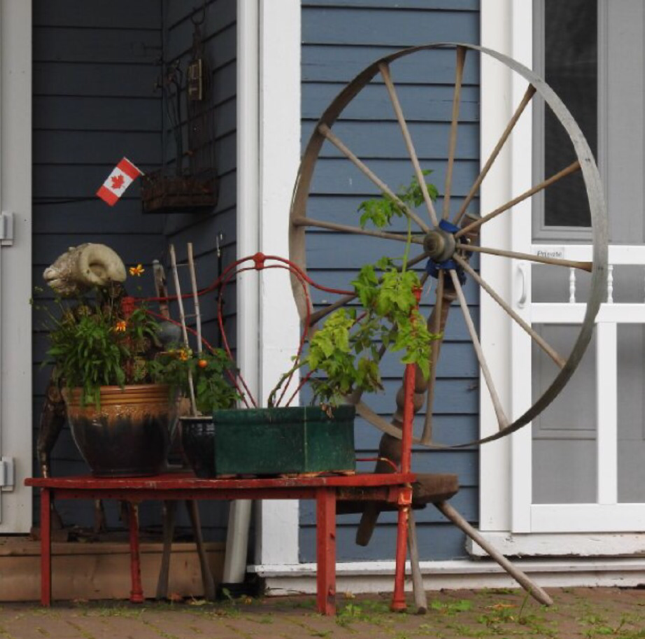 Now the village will return to the quiet lifestyle the residents enjoy for the remainder of the year.

Lovely pictures, Marie. I'm glad you now get to enjoy the peace and quiet of the winter months. For my sister in Florida, it's the opposite: now it gets crowded and busy after a quiet summer. :-)

Victoria by the Sea is such a pretty little village Marie, how fun for you to see it from such a completely different viewpoint! Lots of little creatures left behind when the tide goes out ☺ What was the end of season play that the village put on?

Peaceful and beautiful!! May it remain like this for many years!! Wishing you a wonderful Autumn!!

Great pictures! I love how much the beach changes with the tide.

Lots of interesting pictures. And you got to go to a fun event. Things couldn't be better than that.

I love the changing landscape of the beach, it offers a totally different perspective. Lovely photos!

Yet another wonderful outing. I hope the comedy was great too.

Being in Anne's Land, you could always do Carmody instead of Comedy. Well maybe I'm stretching it a wee bit.

ooooh that orange door!! i am a fan of things staying the same - no surprises!!!

Very pretty! Do you ever find sea glass?

We had lots of laughs and time in nature, Debra. It was perfect.

There is a marked difference in traffic this time of year, Jan.

The one man show was by Chris Gibbs, called Not Quite Sherlock. It was hilarious. We have seen his shows three times now and really enjoy his work.

The show and the village never disappoint, Mildred.

It is a peaceful place, Angela. Happy autumn to you as well.

It was a great day, Ratty.

The village looks so different from the tidal zone, Bill.

The show was hilarious. Comedy is great therapy, EC.

Yes we could, AC. The comedy was great though.

The orange door certainly isn't ordinary but it suited the house perfectly. I should have included a photo of the whole house.

I have a friend who finds sea glass, Jenn, but I don't. My friend and I are going to look for some one day soon.

The beach at low tide is a great place to explore, FG.