Now he is two

My little grandson, Owen, who will be two this week, loves animals. When we are on the boardwalk with him and his sisters, he enjoys the squirrels. If he doesn’t see them, he calls, “Squirrel, where are you?” He is also fascinated with the birds which come around to feed from your hand.

After school one day recently, our daughter, the kids, their grandfather and I went fishing for the first time this year. Last year, Owen sat on a blanket while his sisters and mother fished. This year he’s a going concern, so while our daughter helped the girls fish, my husband and I, neither of whom enjoys fishing ourselves, spent time with Owen. 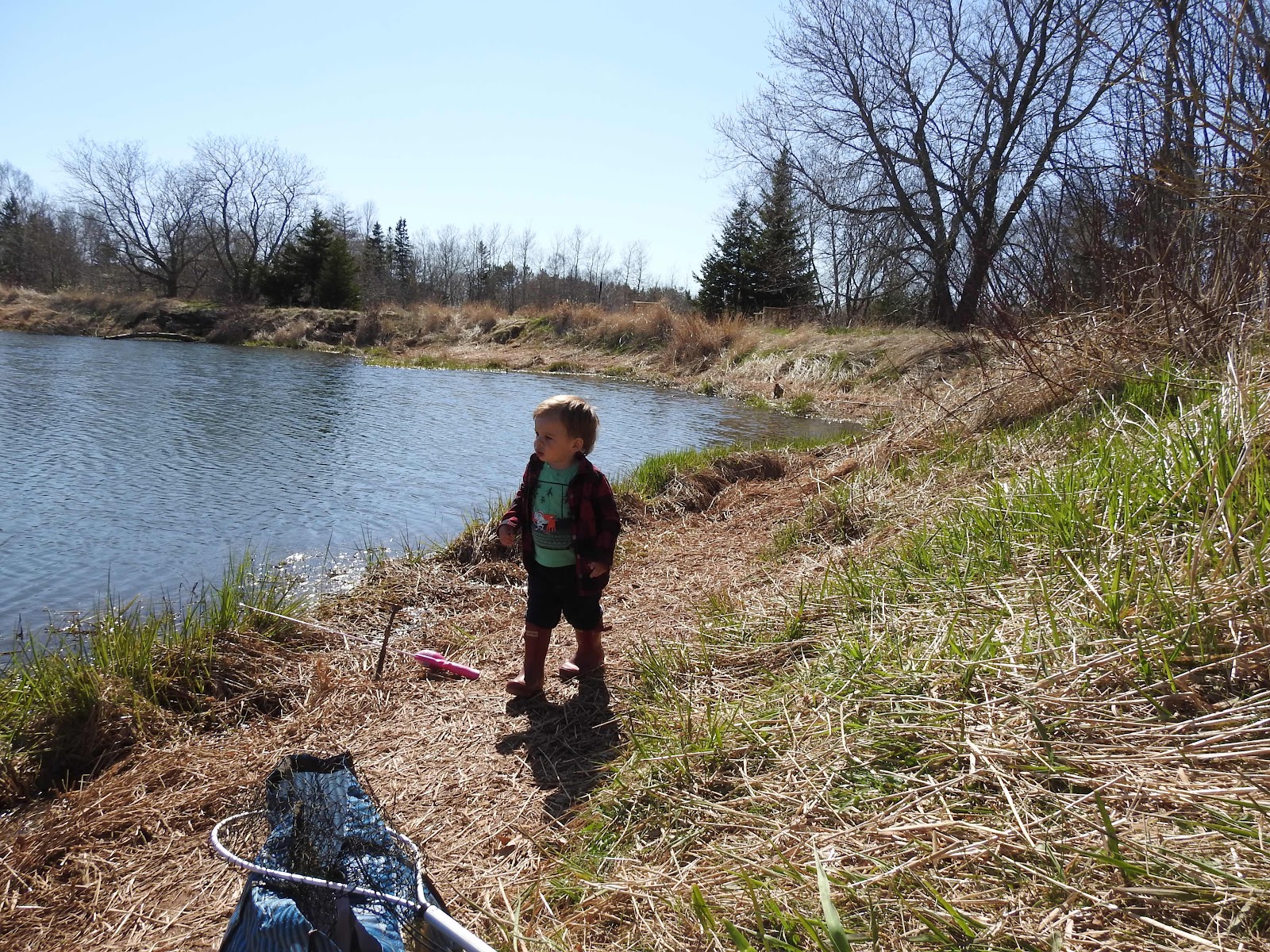 He loves the outdoors and was eager to explore and the Marchbank’s Pond area is a great place to do just that. I took him for a walk and we heard birds singing in the trees. One Red-winged blackbird high above us was insistent with its call and chattering. 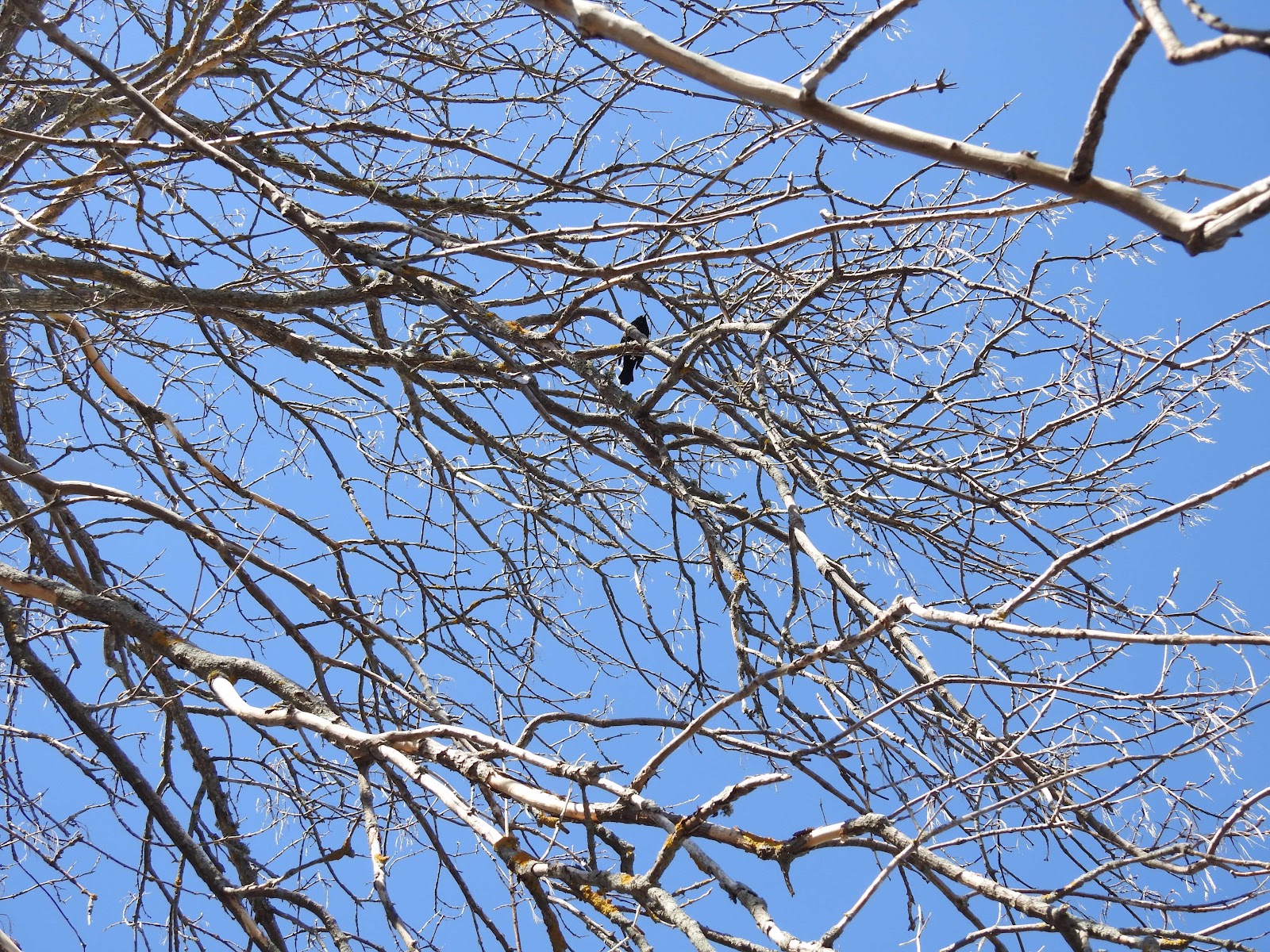 Owen and I watched and listened for the longest time both on our way to and from the waterfall. 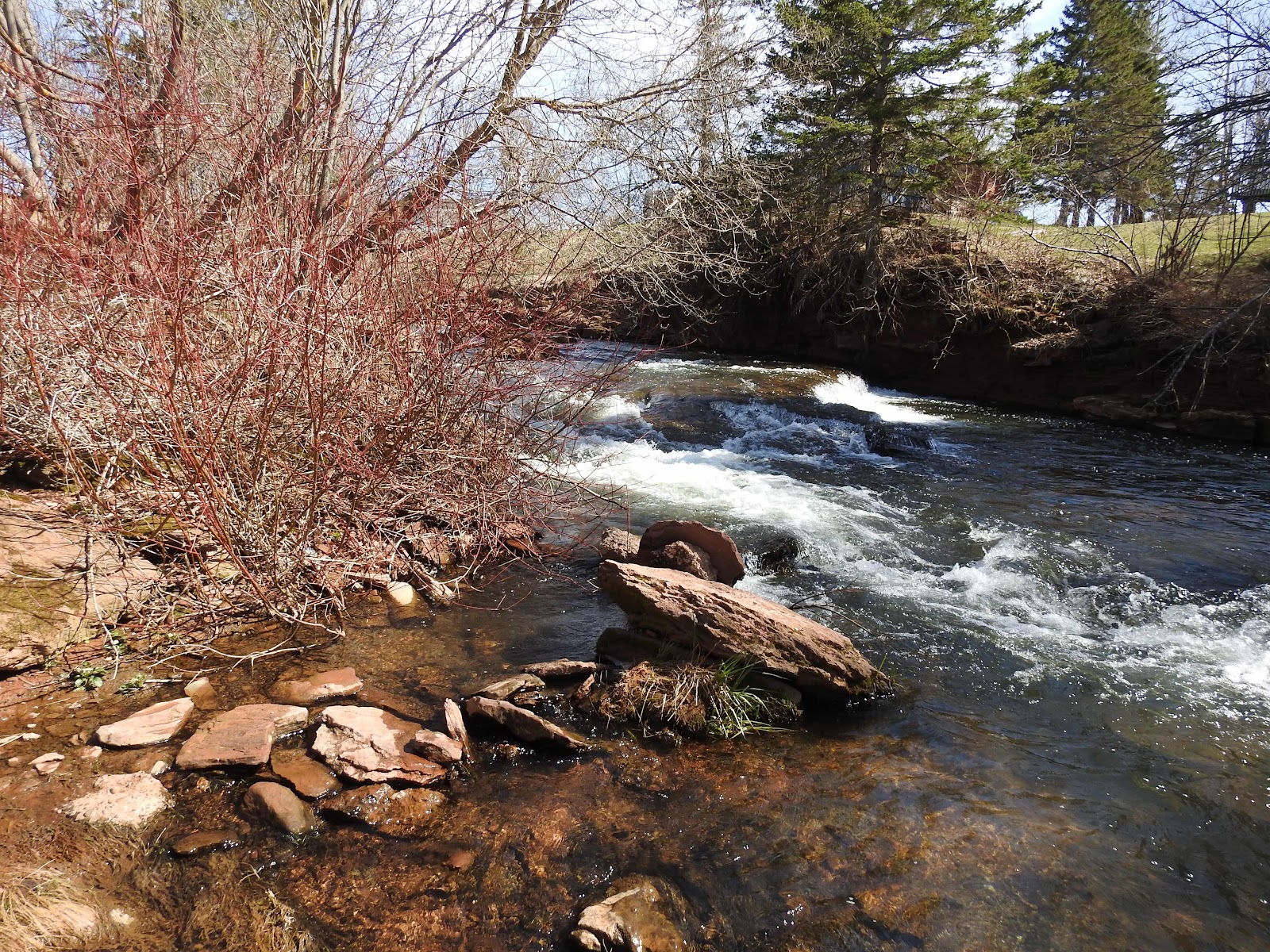 Later, while he played by the pond with his sisters, the same bird flew to a tree nearby then back to the original place again. Owen watched the bird with interest. When he walked to the falls with his mother and sisters, Owen told his mother about the bird and pointed towards it. 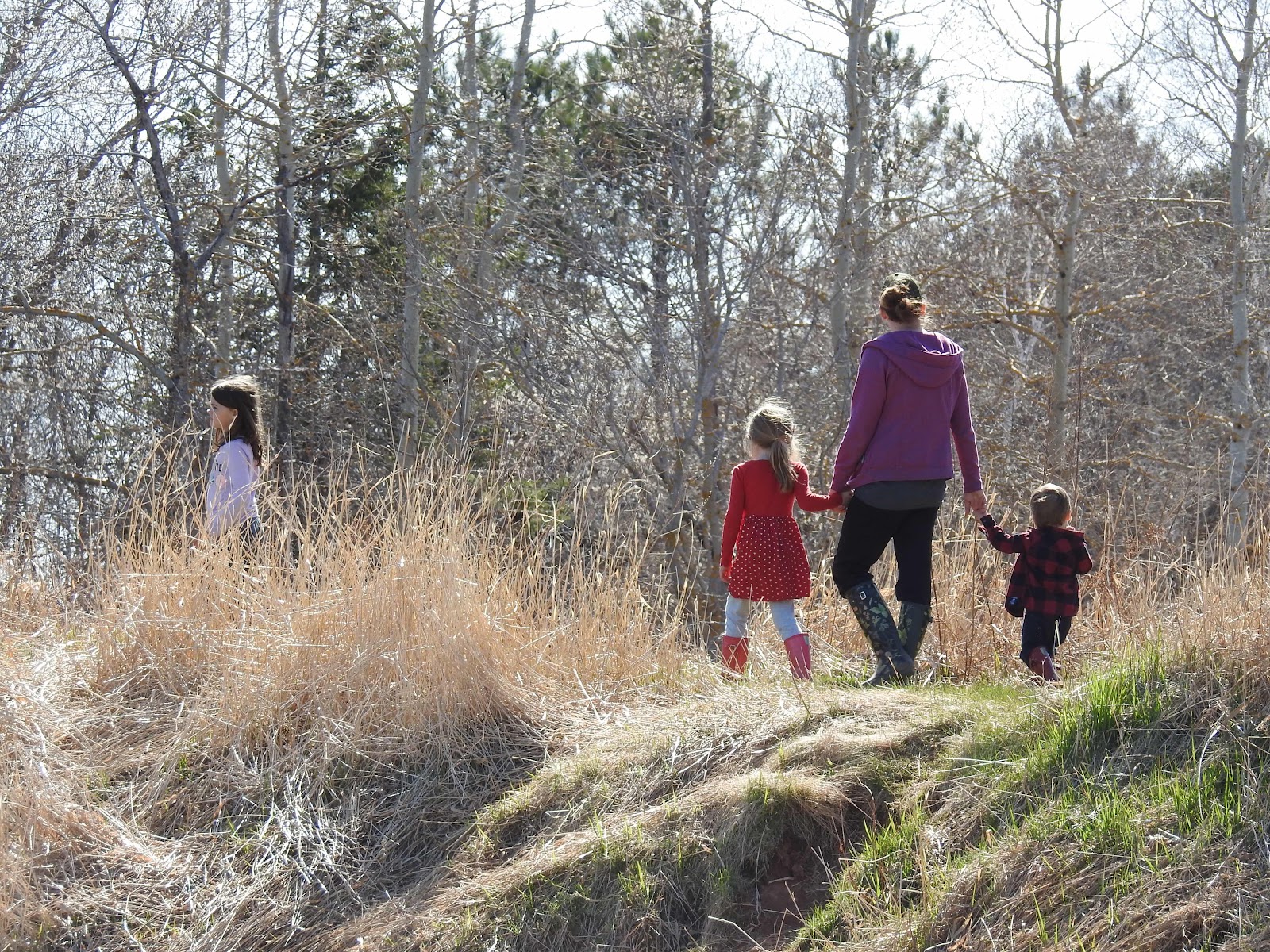 My interest in birds started late in life. Owen is starting early. 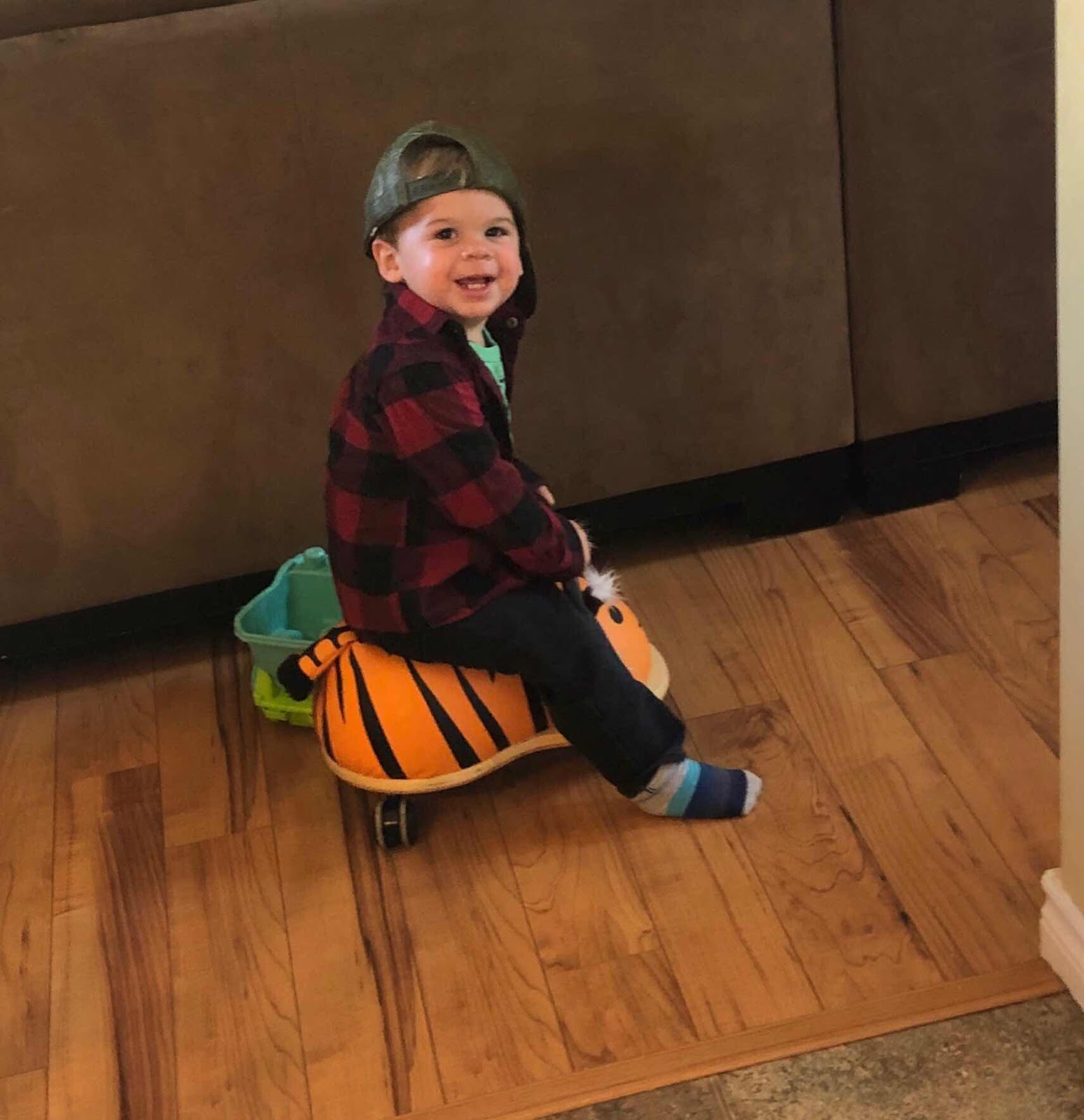 Owen insists on wearing the cap this way.

He is adorable, Marie. You are so lucky to be close to your grandchildren so you can watch them grow up. And they do grow up fast! :-)

Happy Birthday to Owen! He is adorable! Sounds like you had a fun outing with your family. Enjoy your day, wishing you a happy new week!

Yay to birding, but nay to the ballcap. #kidding

A very happy birthday to this cutie.

Every cool dude knows how to wear a baseball cap and Owen is no exception! I hope he continues with his interest in nature. I always had problems pronouncing the word "squirrel" when I was young and certainly couldn't say it when I was two.

They grow up so fast but now is the right time to start teaching him about animals. Cheers Diane

Owen is just too cute. My grand girls are also aware of things in nature that I've encouraged on our walks. When they come over they are always ready for a nature walk. I use the term to encourage them to look around even though we are in the city. We take bags with us so they can pick up rocks and sticks with the intent of making something out of it. I throw the bags away after they leave. I'm always afraid they will ask where their bag is when they return but they don't. They are just ready to go picking again. Children are a wonderful sense of enjoyment.

Owen is adorable Marie, big happy birthday to him 🎊🎉🎈✨ You are teaching him about the great outdoors at exactly the right time, never too early. My grandson is about to turn three, gosh the time flies by so fast.

Happy Birthday to Owen, he is a cutie, I love that last photograph :)

Happy Birthday too Owen. He is a cutie and I'm sure lots of fun to be with.It's great to see that he is already taking an interest in nature.

He's a very handsome young man! I love the fact that little ones love to be outside and are interested in the creatures that share our world.

oh goodness, he is adorable. how nice to get out with the kids to enjoy nature!!

He is just precious. Looks like a lovely visit together. You are truly blessed.

He is so darn cute. How can you not love such a beautiful child. Lucky grandma.

Complete sweetness! You are a lucky lady♥

Owen is absolutely adorable, and that he is developing into a "Birder" is such an added bonus.

It is marvellous to walk with a two-year-old - they want to know EVERYTHING! Happy Birthday to your sweet grandson :)