We stopped to take some photos of St. Peter’s Island off the south central shore of Prince Edward Island. 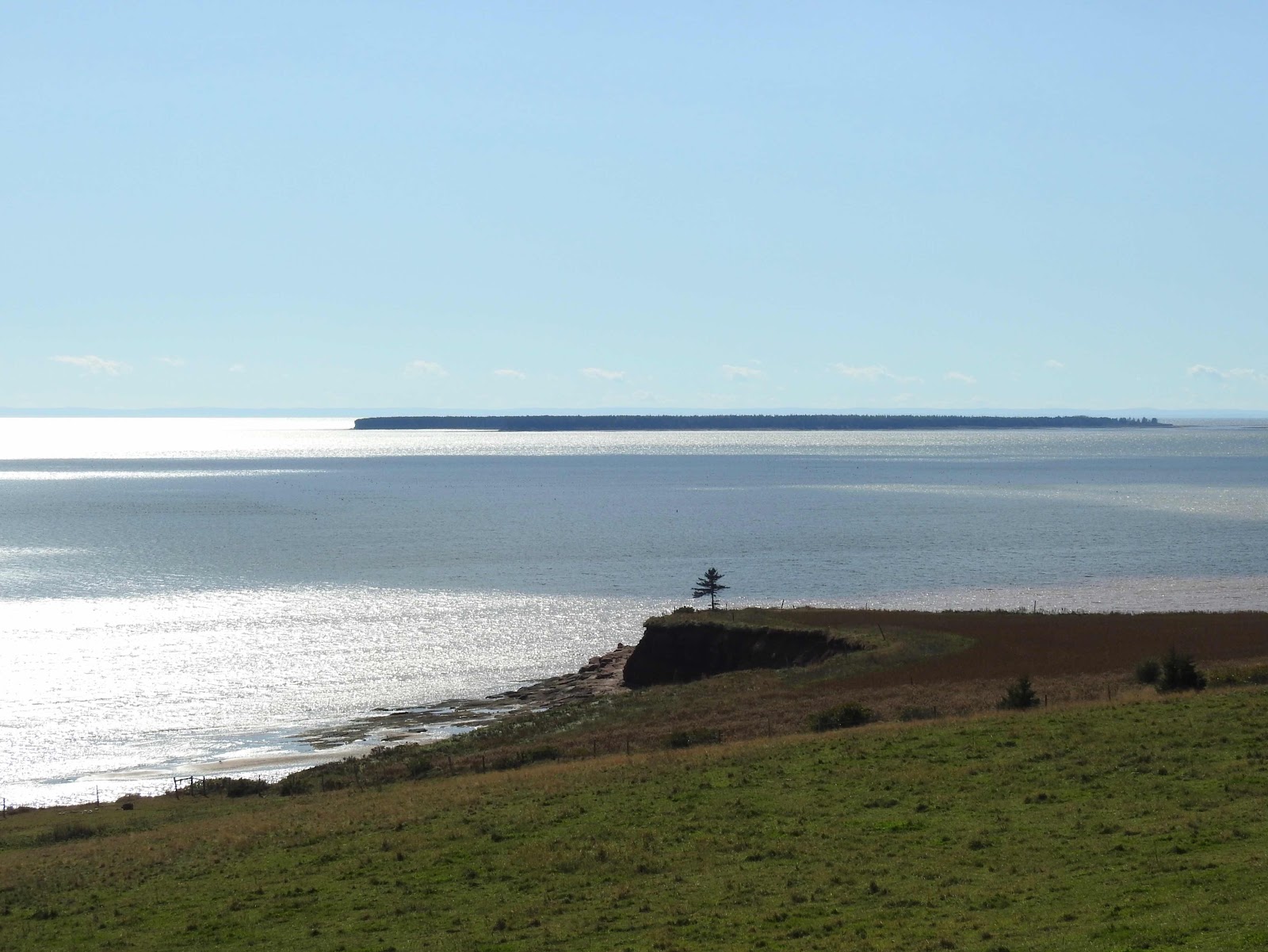 When I exited the car, I noticed the young cattle in the adjacent field. 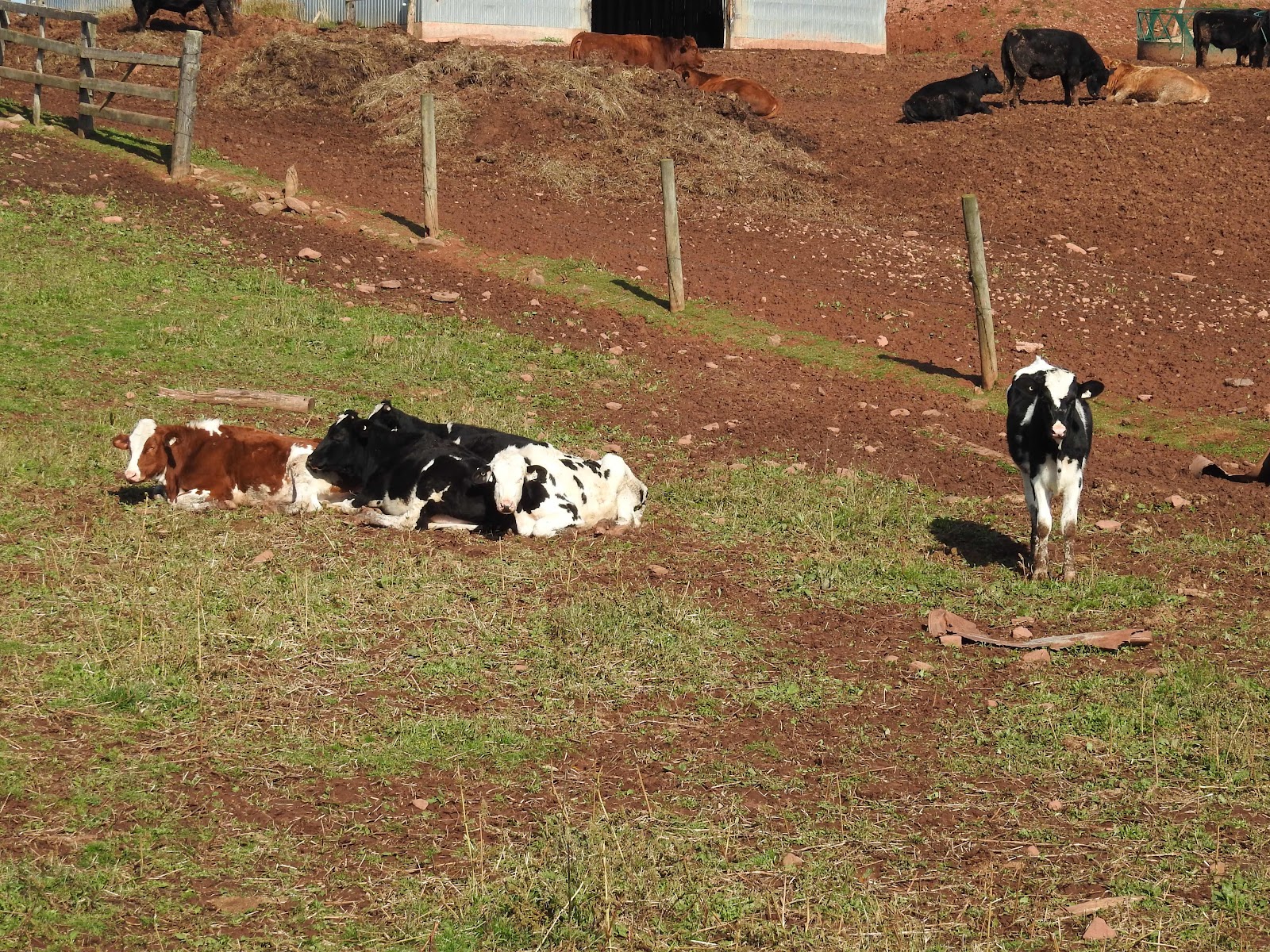 Maybe you’ve see the videos. Someone approaches a field of cattle and begins to sing. I have always wanted to try it.

I didn’t have the courage to video the scene since my singing is nothing special. However, I summoned up my best soprano vocals and began to sing an impromptu song for the bovine audience. On other humans were around other than my husband. He doubted my sanity so he stayed in the car.

The funny thing was, the cattle did react and I took photos. 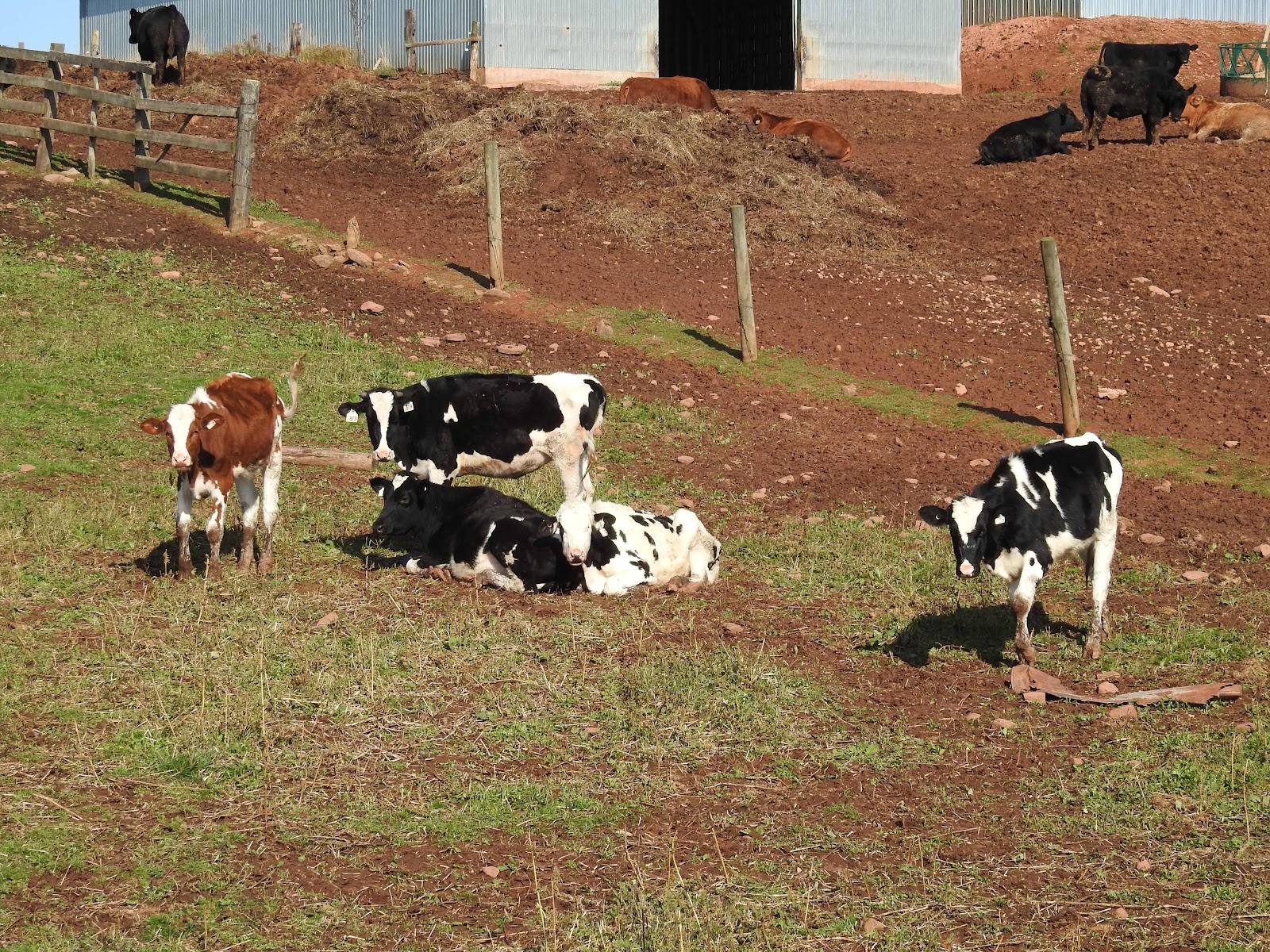 When I started singing, several of them looked up and a few moved down opposite where I was located. Over the next few minutes, as I continued to sing, 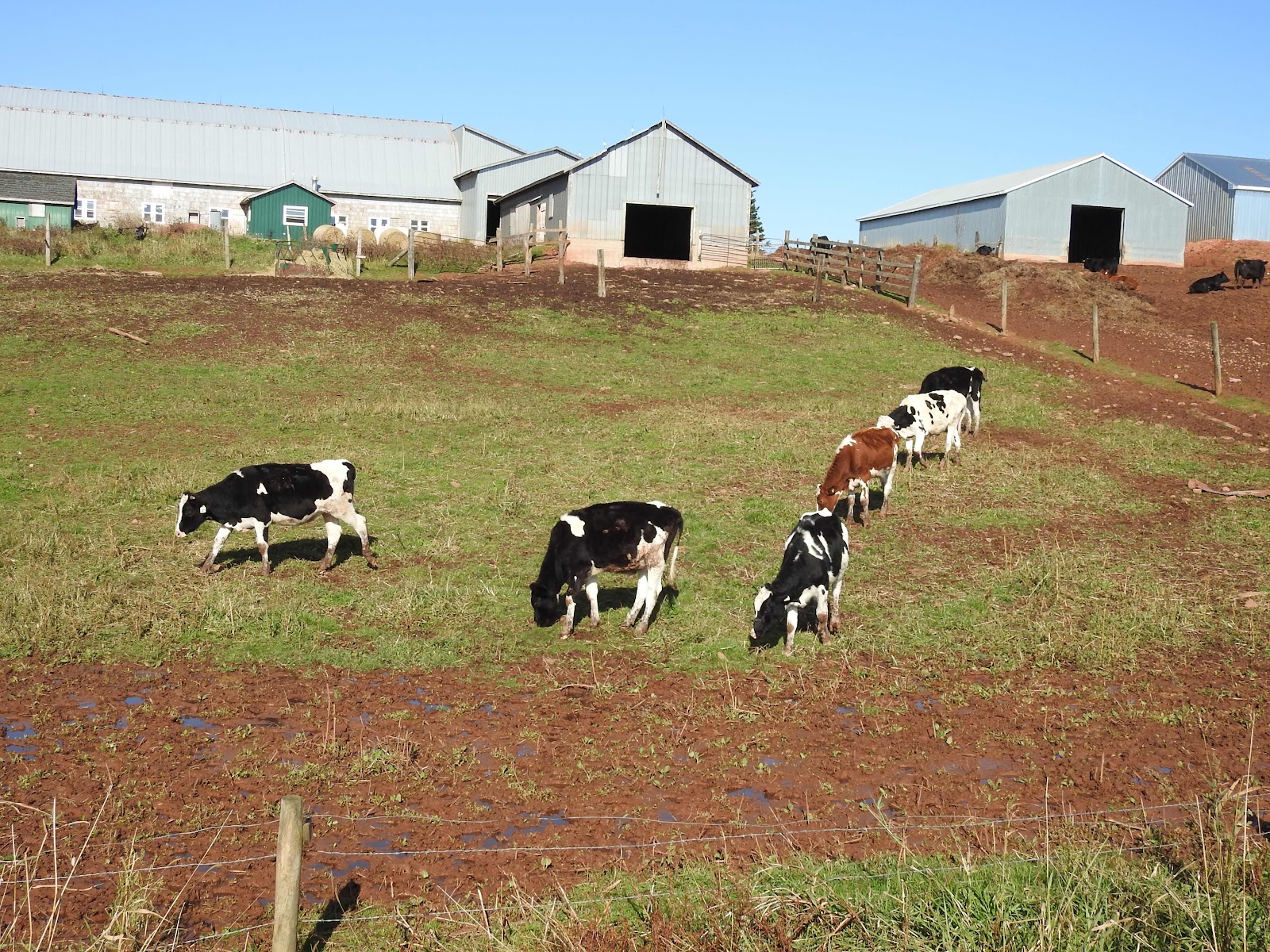 cattle which had been minding their own business, looked towards me, 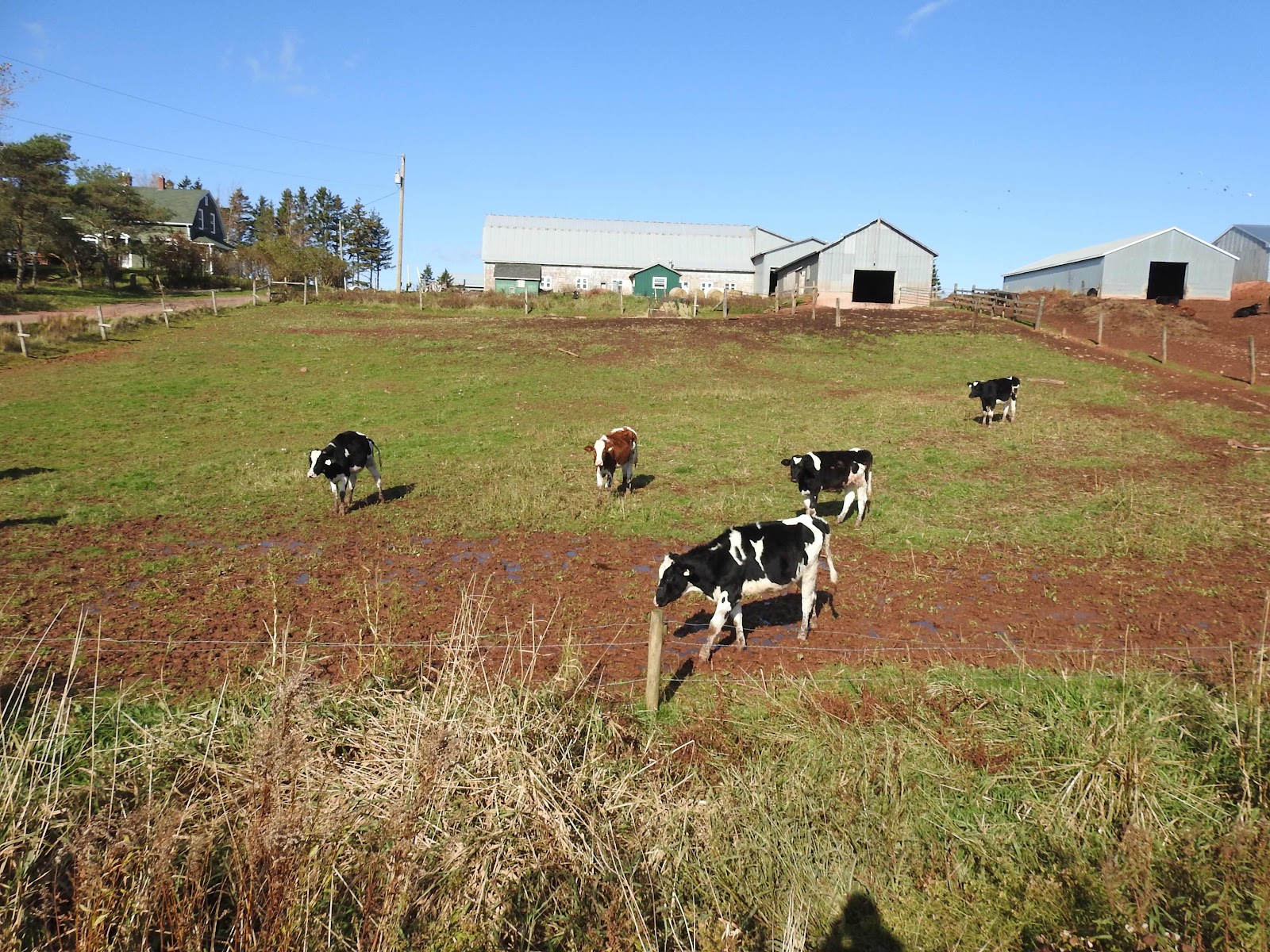 then stood up and moved to join the others opposite me. 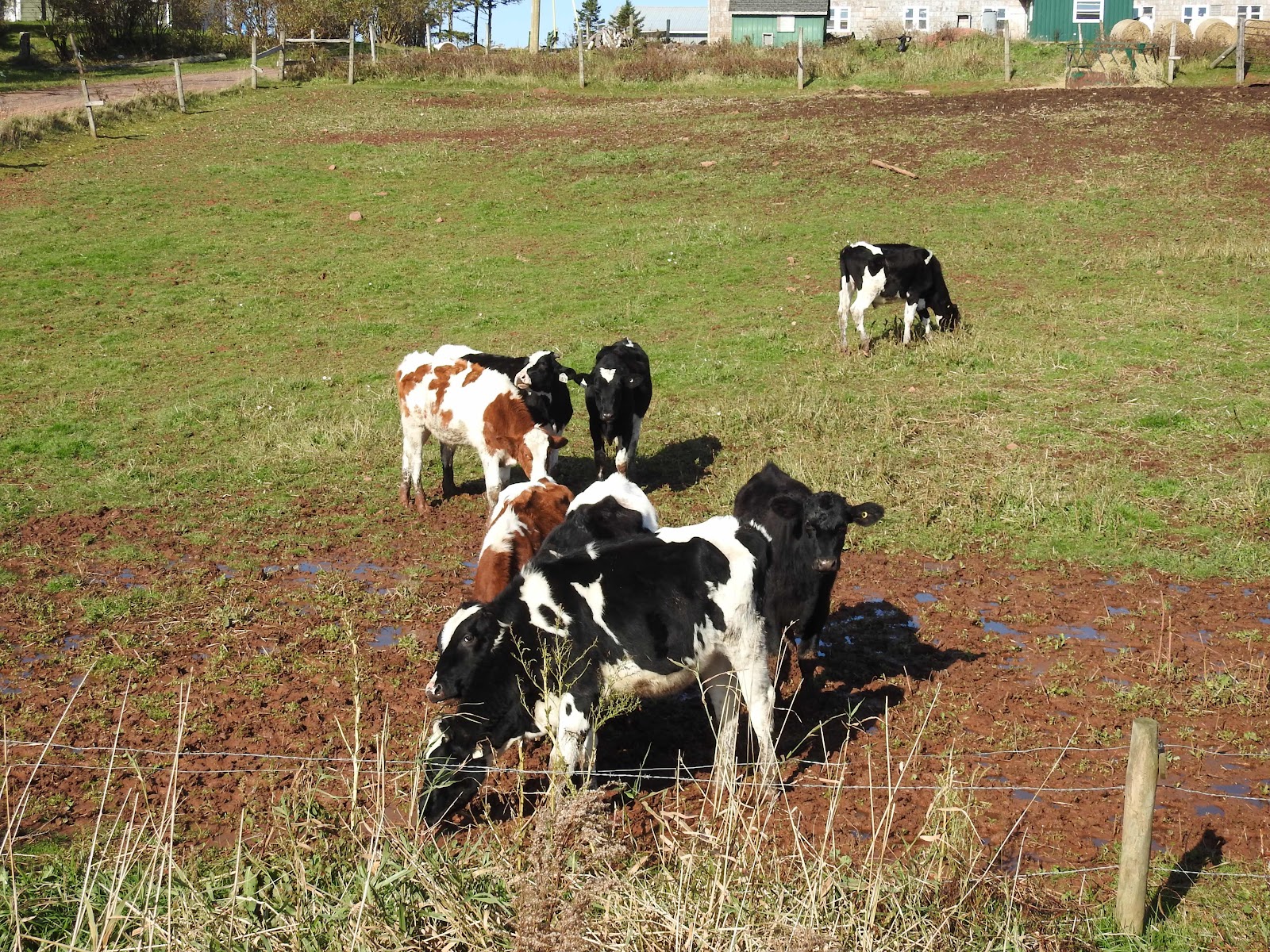 Some farmers play music for their milk cows to soothe them. These cattle looked relaxed enough but it must be boring for them in the field day after day. Does the serenade break the boredom for the bovines?

You know I have to do it again! We don’t want bored cows on the island.

What a fun thing for you to do!

I do like the composition of the first photo with the layers and the lonely tree to focus the eye.

That was nice to serenade the cows. My singing would probably scare them and they would run the other way. No bored cows allowed. Cute cows and I love the photos. Enjoy your day, wishing you a happy new week!

I cannot sing with a bucket over my head, so I am guessing I might create a stampede in the opposite direction.

wow what a wonderful thing to do dear Marie

i am so happy you simply followed your heart and sang :)))

i used to do it when i was back in village and birds (sparrow crows ,others) and hens were around i would sing and observe will they notice lol and yes they respond well most of them :)
this is amazing experience my friend :)

Make singing to every bovine on PEI your new mission in life! They love music!

I love that you did this! And I am sure the cows did, too. They probably don't get all that much attention, but at least they are outside!

What a lovely thing to do! I would say I'd give it a goo but my voice might make them ill.

I used to sing to my pigs when I worked on a farm. Quite often sows with young piglets were a lot calmer and allowed you to enter the pen with them if you sang to them. My mother had a small dog that used to sing along with her, not always tunefully.

They were probably thinking, it's about time someone broke out in tune. :)
No bored bovines on PEI, we now have our own personal singer. :)

If I sang to them I am sure they would block their ears!! Love your header shot. Hope all is well Diane

How I loved this post.
What fun - for you and for the cows.

I have been known to talk to the animals I see, but have never tried singing to them.With my voice, I think I should leave it that way. I do love that lonely little tree in the first picture.

Oh my gosh! I would have LOVED to hear that! What a hoot.

That is so interesting. I have never sung to any animal except maybe my dog but I think I'll try it. After all I am in Texas and there should be a heard of cows somewhere around here.

Wonderful Marie. You should make a video of it and have it go viral !!

I have seen videos of cattle responding to music, so it makes sense.

Oh, I so wish i was there. I just a bit back watched a whole bunch of cow/music videos. I have watched some before, but that night I watched a bunch.

My brother used to visit this one farm..well, he would go there for this or that...he always left the music on in the radio cause one of the horse always came over and listened.

OH....I so wish you could see my daughter's dog and TV! You would have to see it to believe it. She even has her favorite commercials and will come running...and this one had young kids/babies toddlers on it...and she might not come running, but if you looked at her, her tail would be wagging. I know she would flip out if she had a baby to look after. And what is funny, she always comes and stands and watches when the National Anthem is played.

I'm going to have to try that and see what happens! My father always played music on the radio when milking the cows, he said it kept them quieter. We used to have a cat who would sit beside the stereo speaker and listen to the music. I already talk to plants (there, I've admitted it!) so singing to animals shouldn't be too hard!

Now I must give it a try.

Can you imagine the conversation back in the barn that evening. "Hey girls, you should have been with us today. There was a free a capella performance we hadn't even heard about. Just a single alto, but not bad at all. She was a little croaky in the high ranges, but she performed just for us, so who's complaining? I think she brought the conductor with her, but he stayed in the car."

I had never heard of this, but now you know I must try it myself. No, I take that back: my old lady voice now sounds more like a croak. I love this story, Marie! :-)

Oh please Marie, you have to video it for us the next time.. I'm looking forward to it now 💙

What cool thing to do. Good for you, makes me want to try it, although maybe I'll take my little grandgirl who can actually sing :-) Great photos.

Ahahah
I wish I were there!
I'm sure they liked the entertainment.

Love that!! Interesting to know what it is that draws them to the sounds of music or singing.

I love that you did this, Marie :D

So much fun to read about! I hope you do it again!