The Bonshaw Trails were spread out before us as my husband and I left  the picnic area and headed into the woods. Meters from the park, we heard a squirrel high in the trees. We stopped to catch a glimpse of the creature which sounded as if it was scolding us. When we looked up, a cone dropped from the trees to our feet. 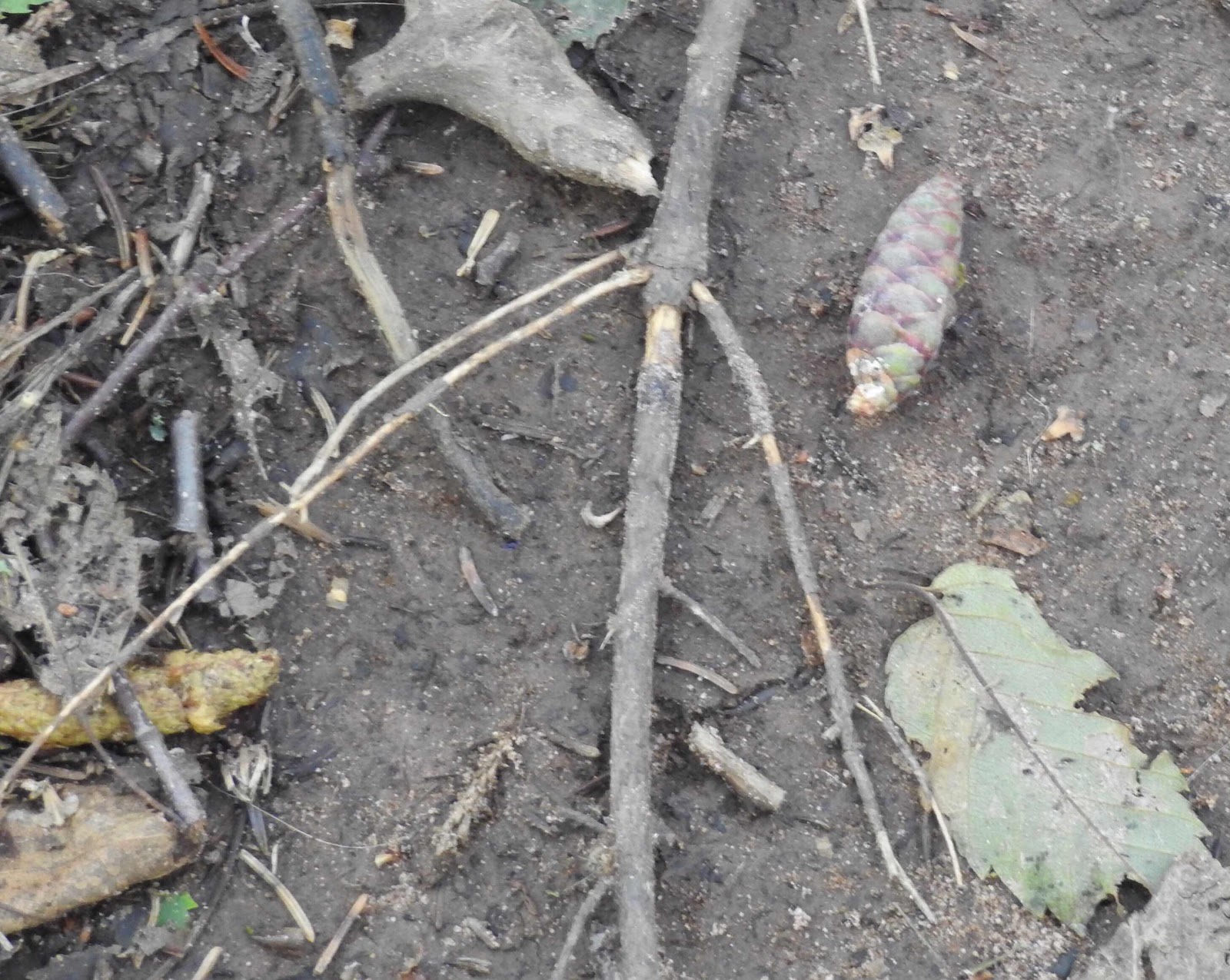 An enterprising red squirrel was cutting cones from the conifers. The ground around us was littered with them. Later it would gather them for its winter supply. These little squirrels are some of our favourite little creatures.

On the boardwalk in Summerside, some squirrels will feed from your hand. They love peanuts in the shell and will run off with them, squirrelling them away for later. Sometimes they are hungry enough to break one open for a meal while you watch. 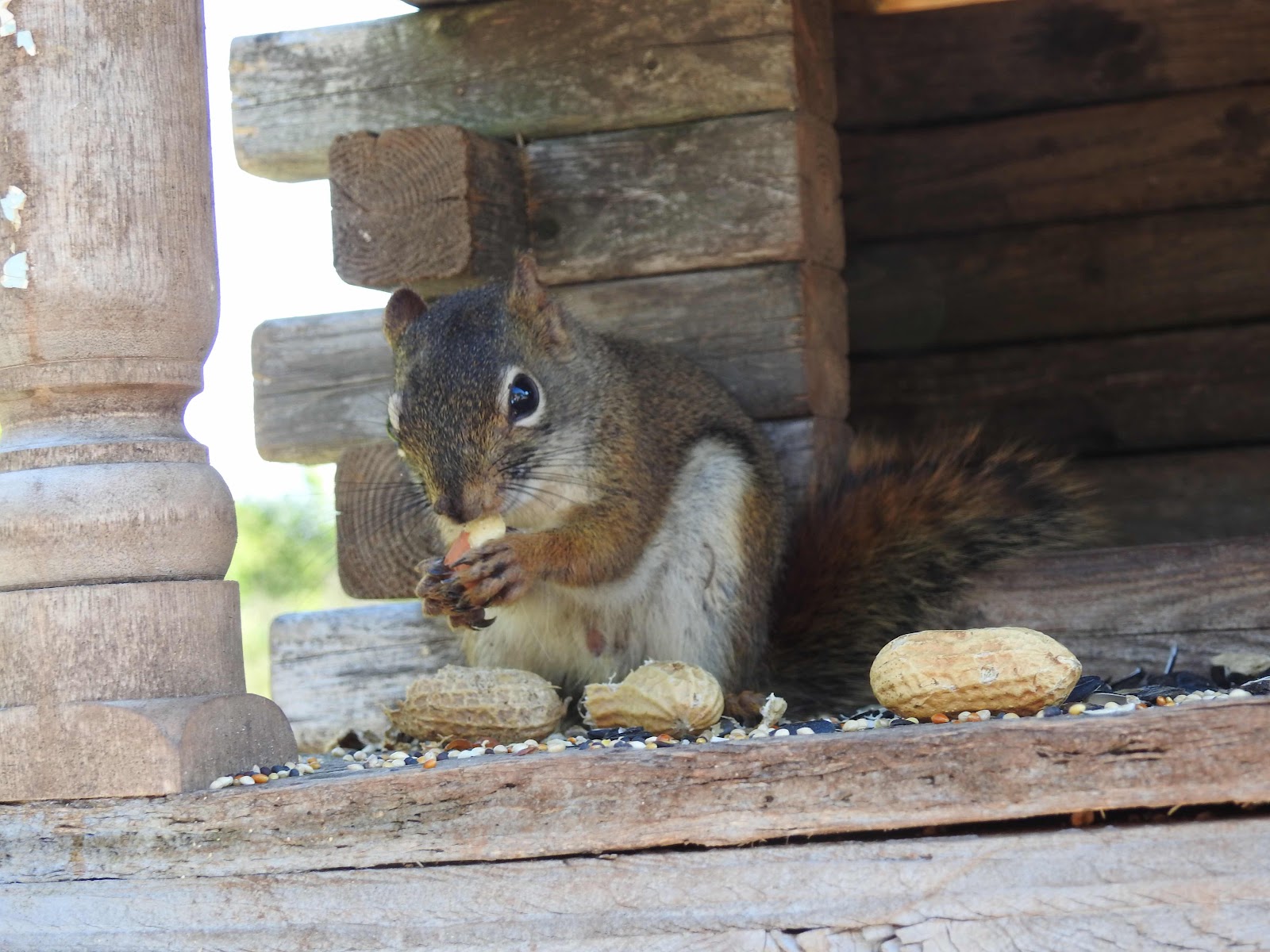 This autumn we saw a red squirrel with a mouthful of straw for its nest. 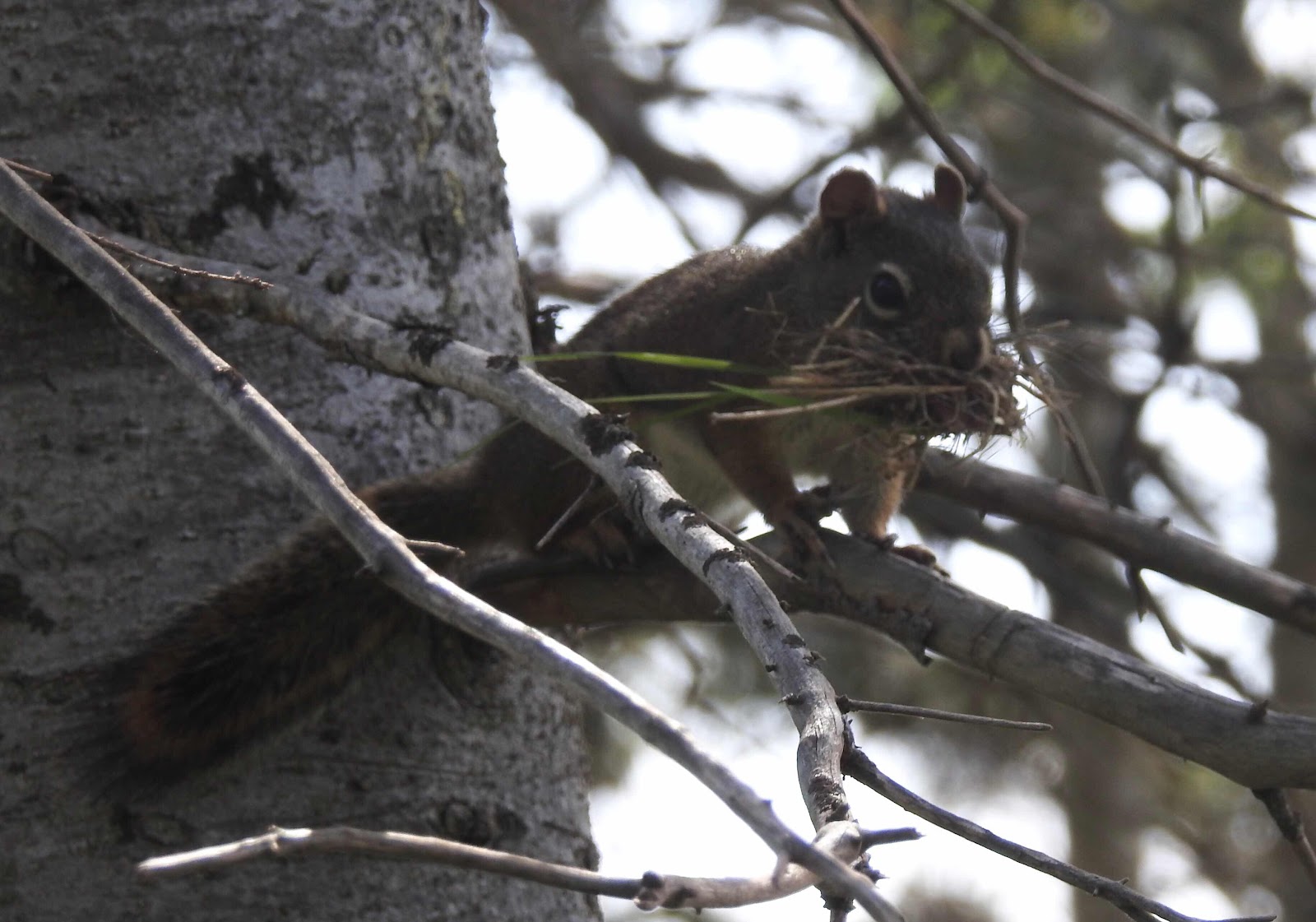 They don’t hibernate but remain active all winter.

Our golden grand-dog thinks she can catch any squirrel which crosses our path. If she is not tethered, she runs after every rodent for a few seconds before it scampers into the woods. 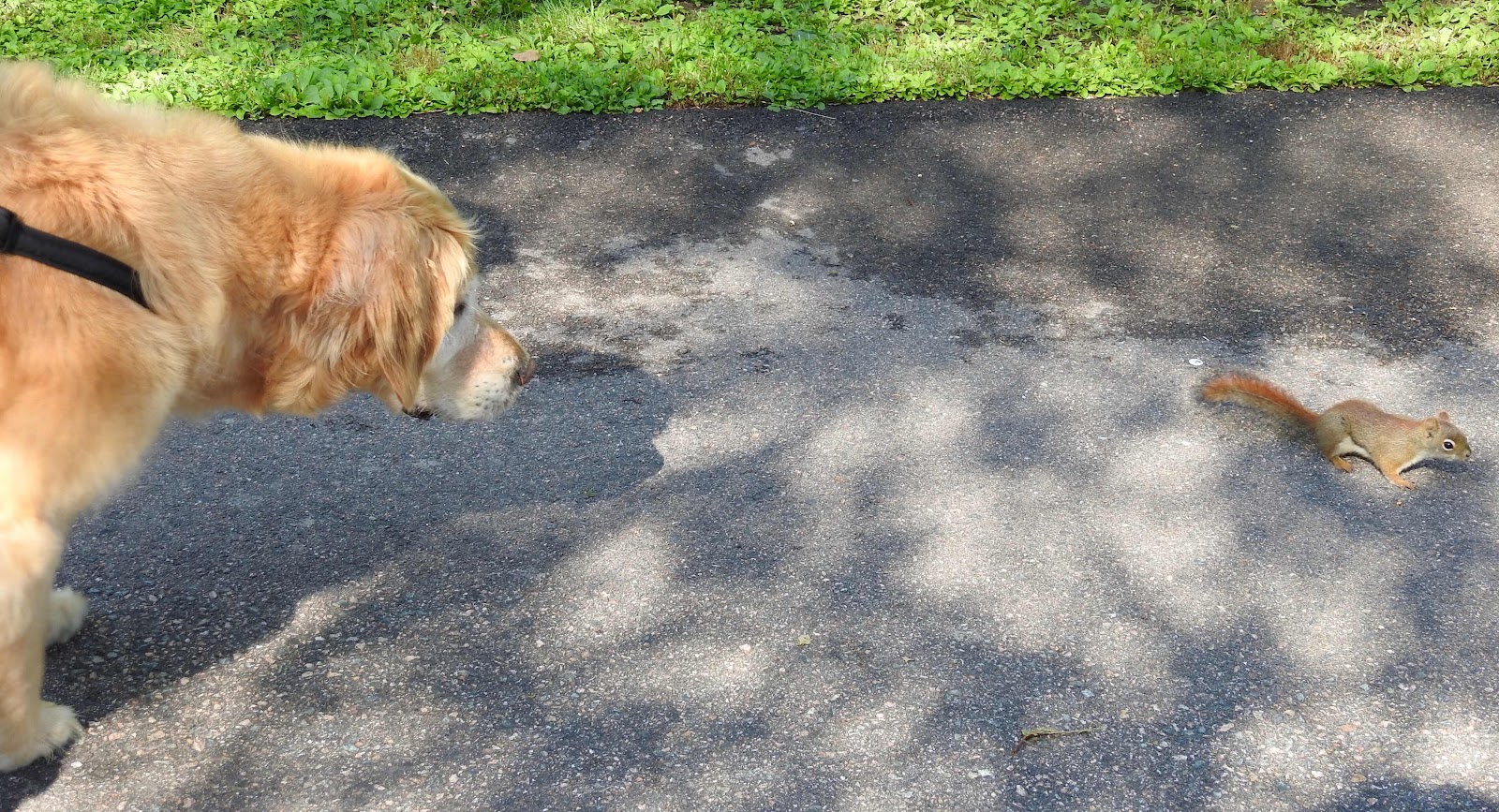 We witnessed the tenacity of these little creatures when some walkers left seeds on the boardwalk where one little squirrel was active. A crow flew in to feast on the seed, only to be scared off by the tiny squirrel. The bird squawked as it flew off. It met its match in the tiny creature. 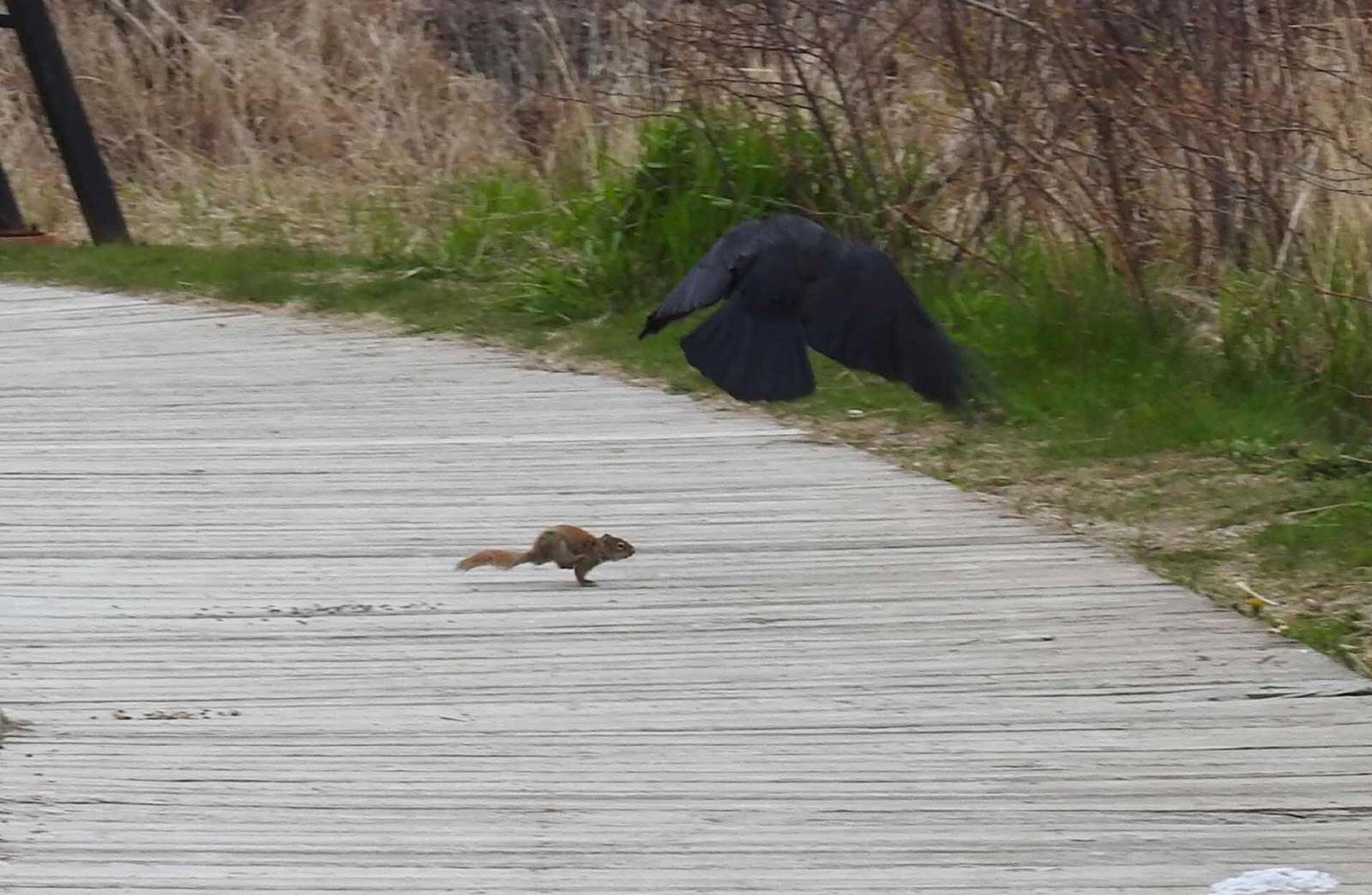 Sometimes the rodents are mere silhouettes among the trees, especially in areas where people are not feeding them. 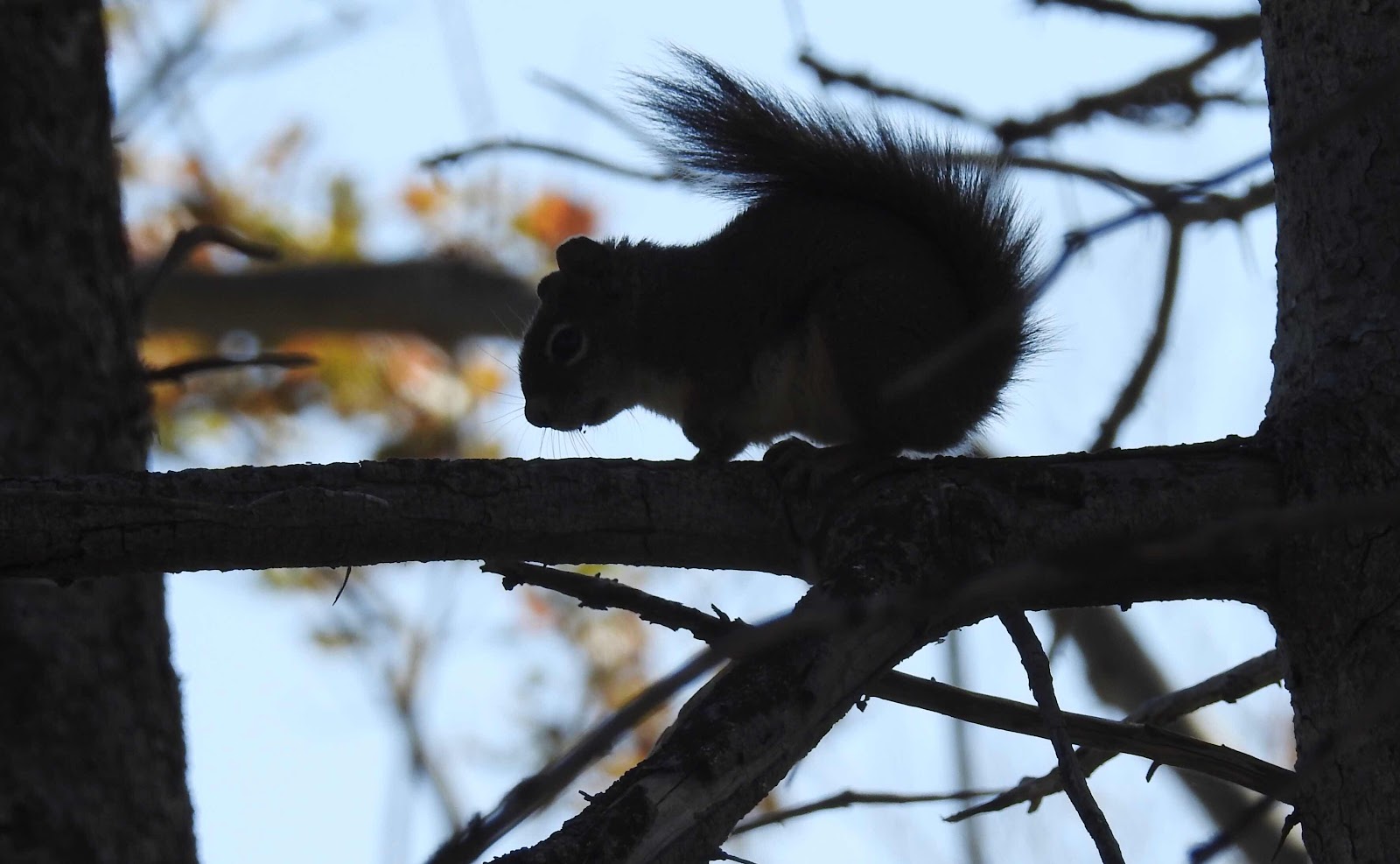 We enjoy their antics everywhere we encounter them.

Oh they have such sweet faces Marie, and their big full tails, so gorgeous, I can see why they are a favourite. Beautiful shots here 💜

Love your pictures of those squirrels. And they can be pests but many of us love them anyway. They are everywhere around our neighborhood. :-)

Squirrels are great fun to watch! Love your photos!

I love the charming way the squirrel was holding the peanut to eat it. I can see why you find them so fascinating. Excellent photographs.

Many, many thanks.
They are something I would love to see - and your photos reinforce my longing.

I was afraid that bird was coming in for the squirrel. Glad it was the squirrel doing the scaring. I saw a hawk pick up a squirrel in my front yard once and it absolutely terrified me. The squirrel was crying while being flown away and there was nothing I could do. It is nature's way, I know, but I'd prefer to see my squirrels happy in the trees.

I love the photo of the little creature scaring away the big bird. :) What a great capture, Marie.

Those little squirrels don't seem to know their diminutive size, but will chase anything.

What an interesting walk and observing these little creatures.

Do squirrels feed from those cones over winter?

Really pretty photos of the squirrels. We had pecan trees at the home where I grew up and it was so entertaining to watch the squirrels.

We are mostly in black/gray territory, but there is the occasional red in the bush here and there.

Seeing squirrels like this in the wild are delightful, Marie. I especially like the image of the one eating peanuts in the shell. Well done!

When Mama Squirrel used to have her babies in our tree, we had a blast watching them. And sometimes she would 'play' with me....I would scuffle my feet and she would take off running and grab a stick and wrestle it, then run up the side of the tree about eye level and I would go and chase her round the tree...and then there were her babies. So much fun.

We have Red squirrels here in France but sadly in the UK there are very few left, the imported Grey Squirrel has taken over. Lovely photos. Cheers Diane

There is something so darn appealing about squirrels

1. they are cute as buttons
2. they have the best energy
3. they plan for the future
4. they are not afraid of taking risks
5. they are very adaptable
6. they don't live in my trees (pesky little buggers)

We have several gray squirrels that think our fence is their highway and their personal property as they scamper across our roof to the next yard.
They scold us if we are out in "their" yard.
Great photos of your red ones.

What wonderful photos, Marie! We have one (and possibly more than one, because we can't tell them apart anyway) that lives nearby and uses the trees behind our house as his highway to get to other places. When we used to feed the birds, there was one who completely took over the feeder a couple of times, stuffing himself. They're so interesting to watch, aren't they?

Aw! We only have grey squirrels in this part of the country.