There is a newer trail in our city which my husband and I hadn’t walked so one morning last week, we headed to the Rotary Friendship Park for the first time. The park, on east side of town, is as the name implies, supported by the local Rotary Club. It was constructed and is maintained for walkers, bikers and mountain bikers. 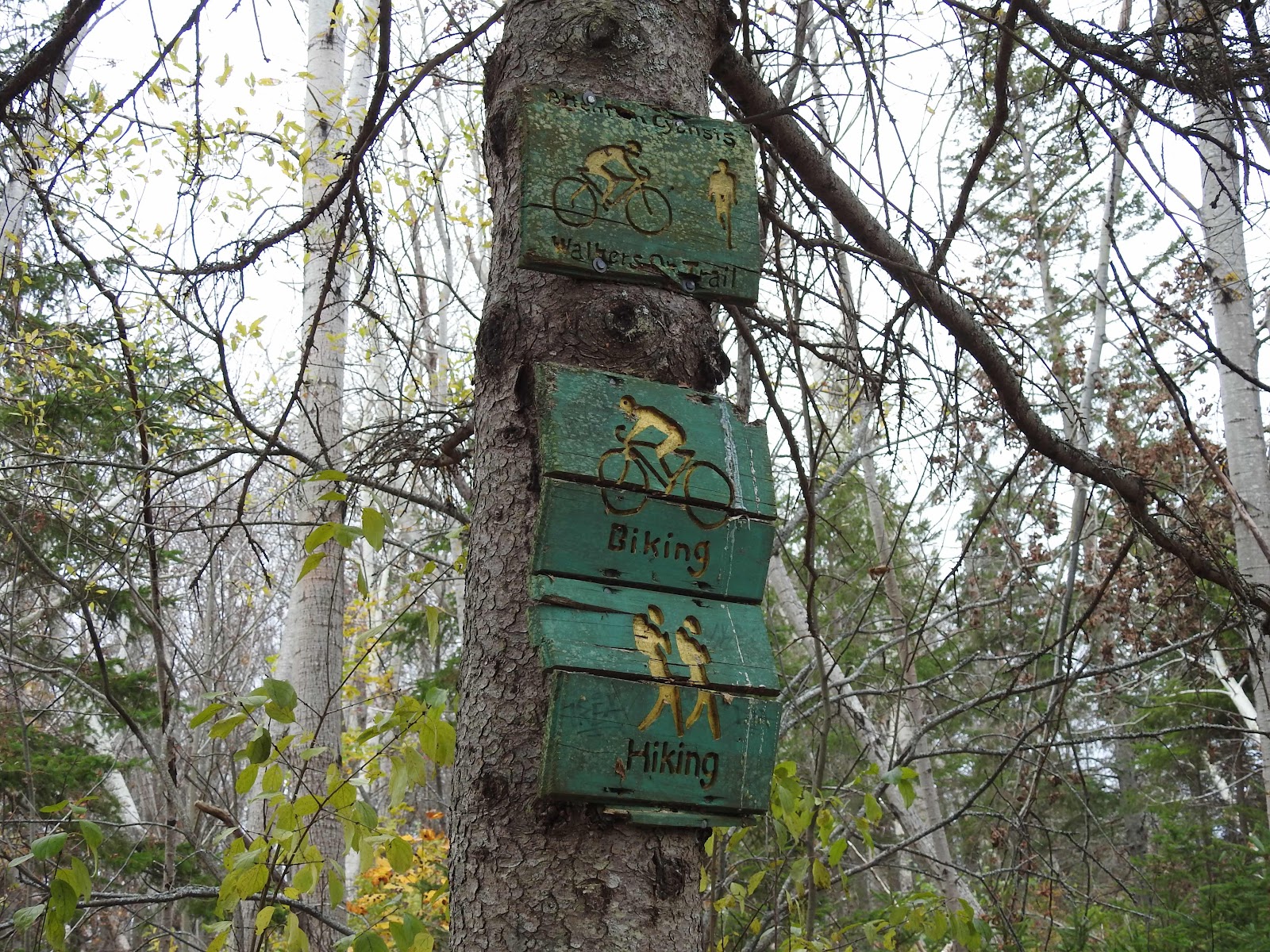 The park has trails which go through forested areas and alongside fields, many in straight line paths. 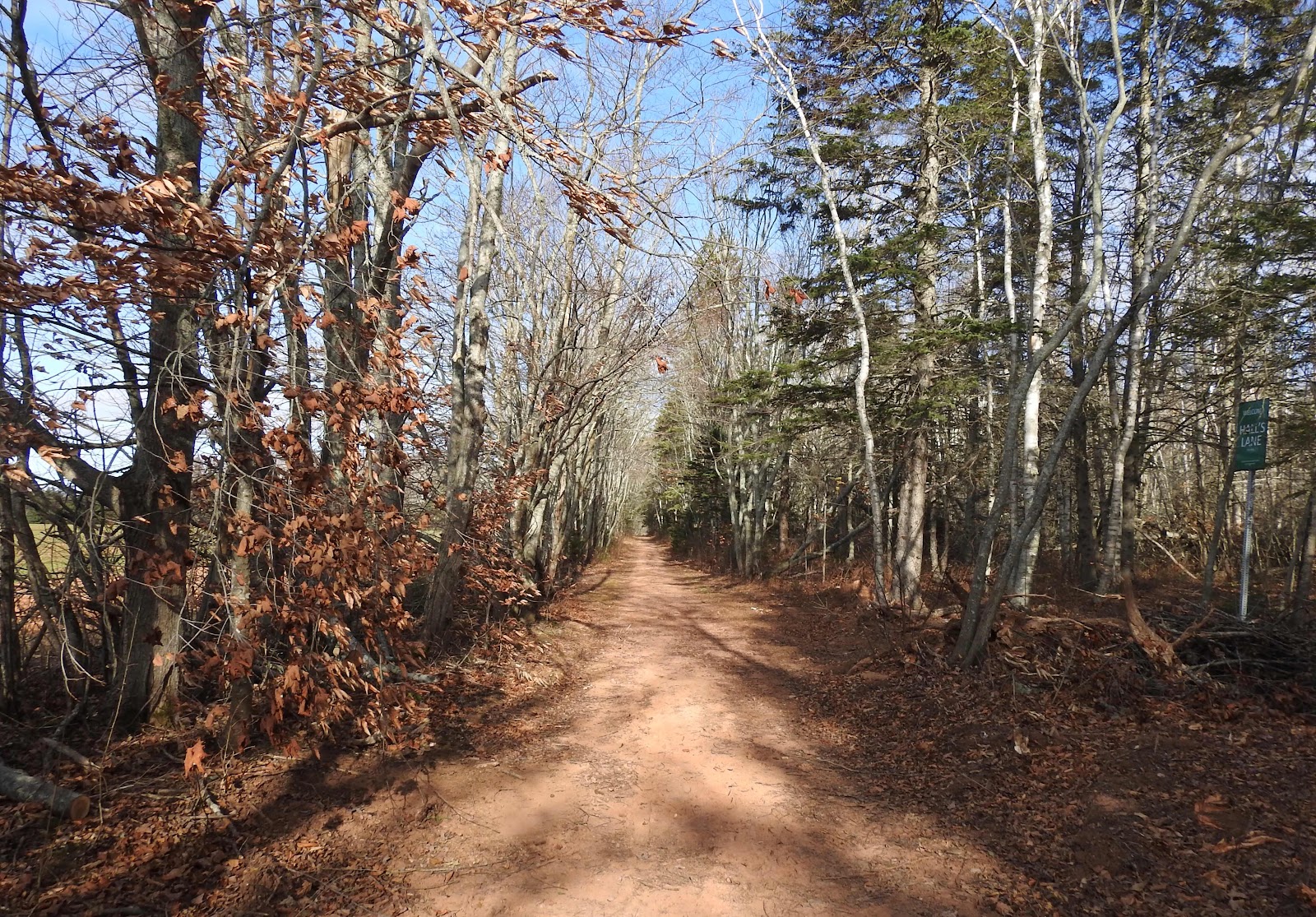 However, the mountain bike trails take you off these paths, up hills, down valleys and over boulders, an unusual sight in the woods of Prince Edward Island.

Since it was an early weekday morning, we took a chance there weren’t any mountain bikers on a trail with an expert skill designation. It was a trail of hills and valleys, 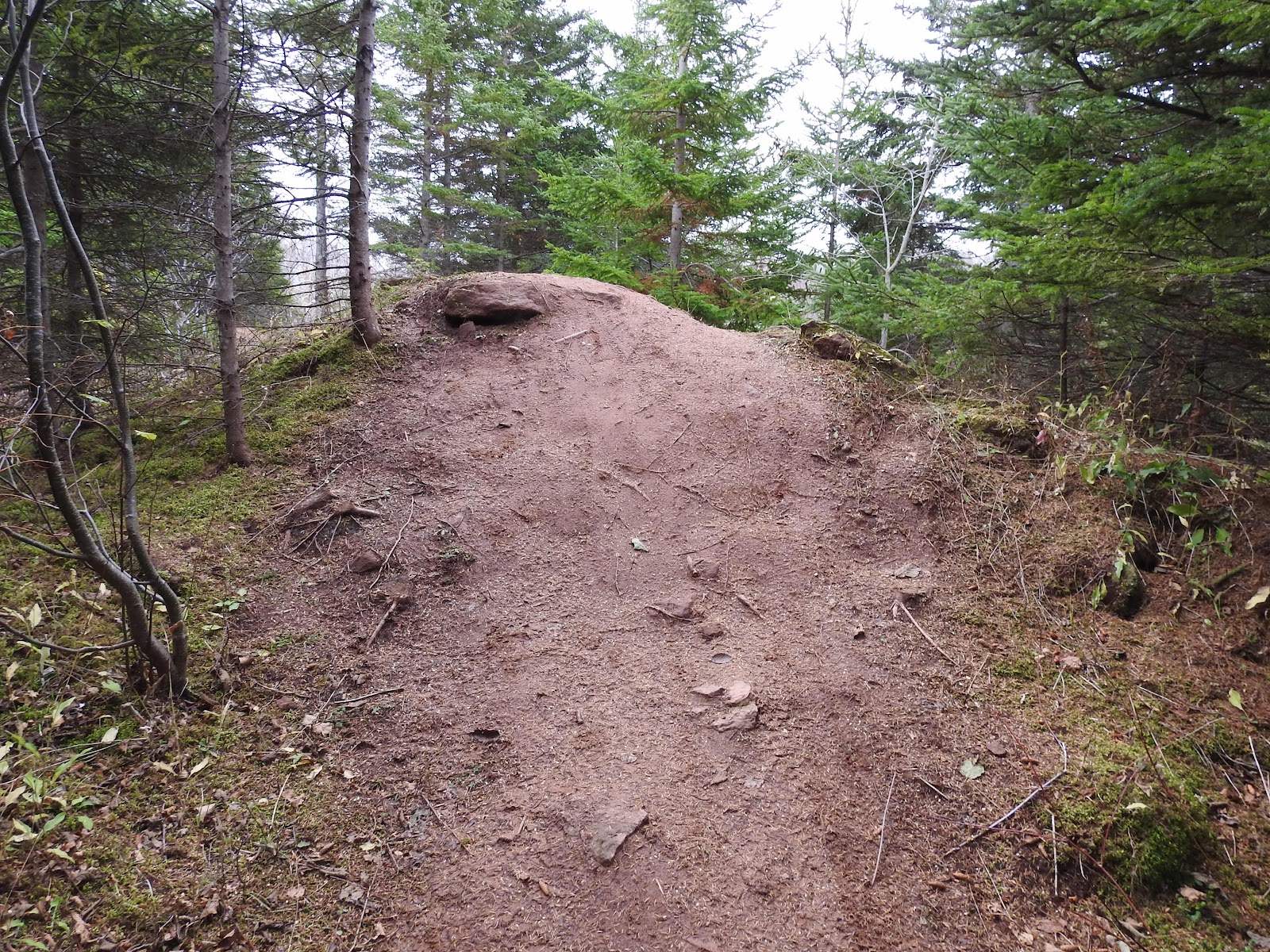 steep turns, boulders to manoeuvre around or over. 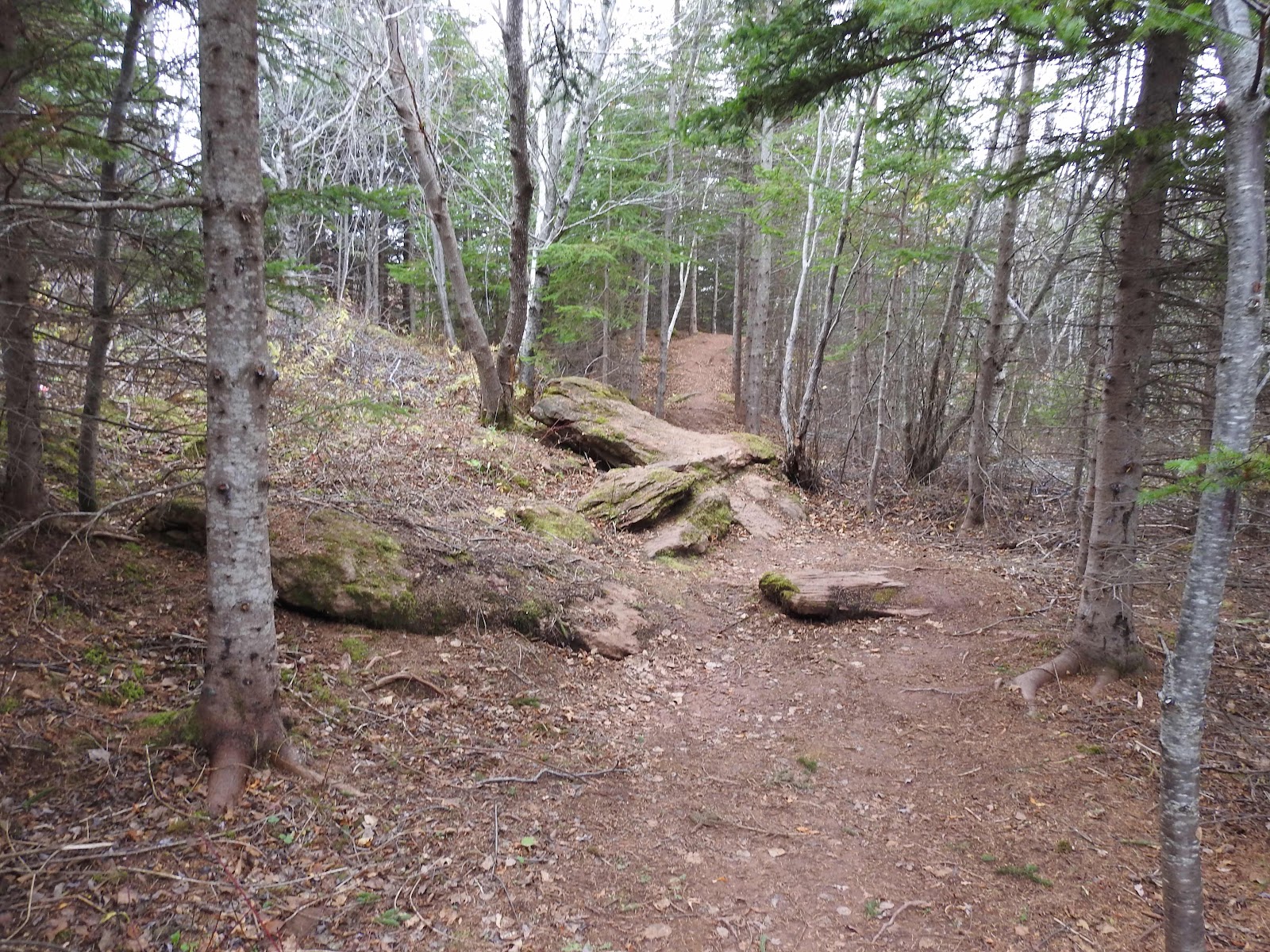 The hills were a challenge but fun too. 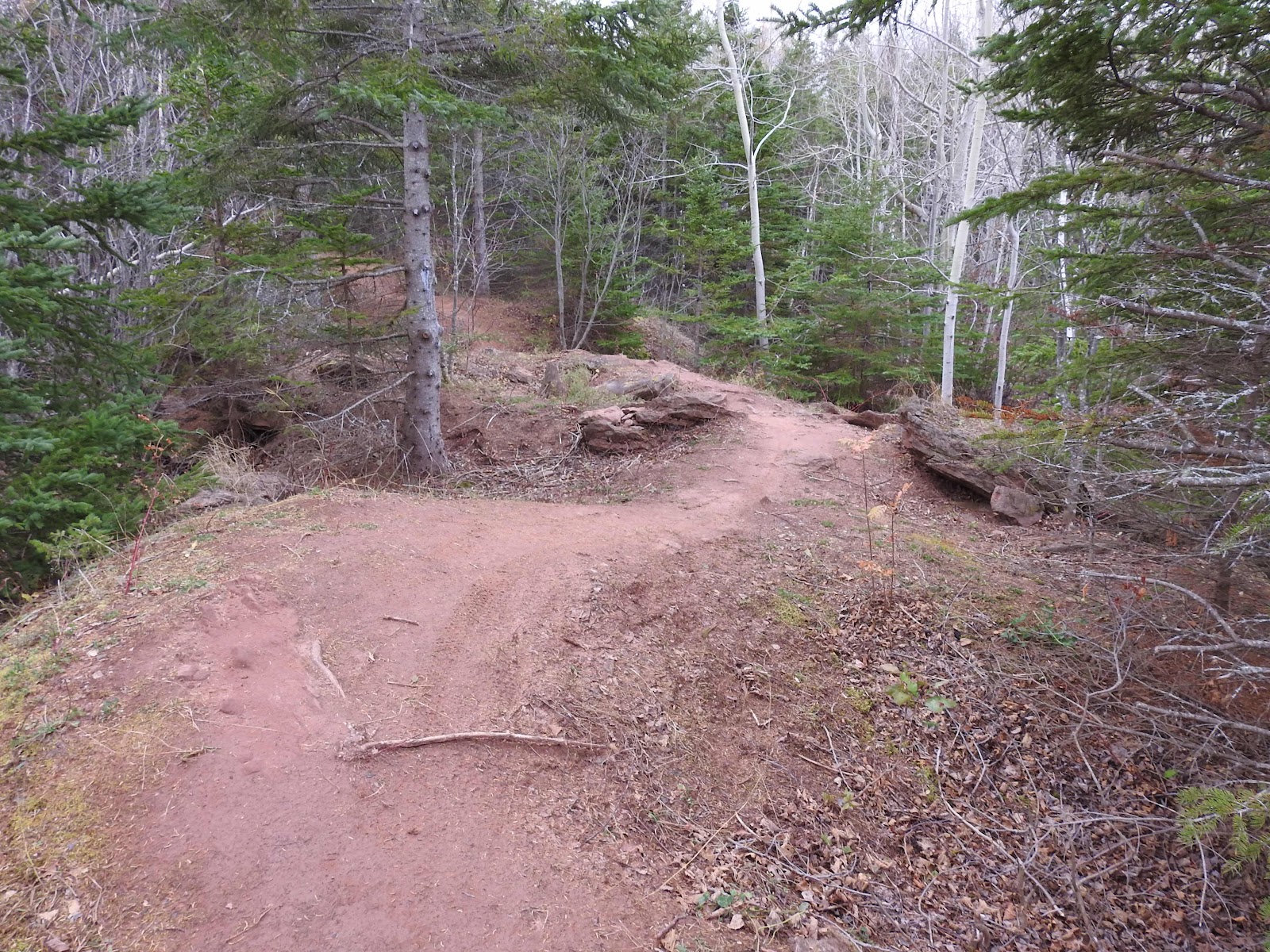 We also walked some of the novice trails.

There are many trees down in this park, probably victims of Dorian like so many other trees around the island. Work is underway to clean up some trees which could be a danger in the future. 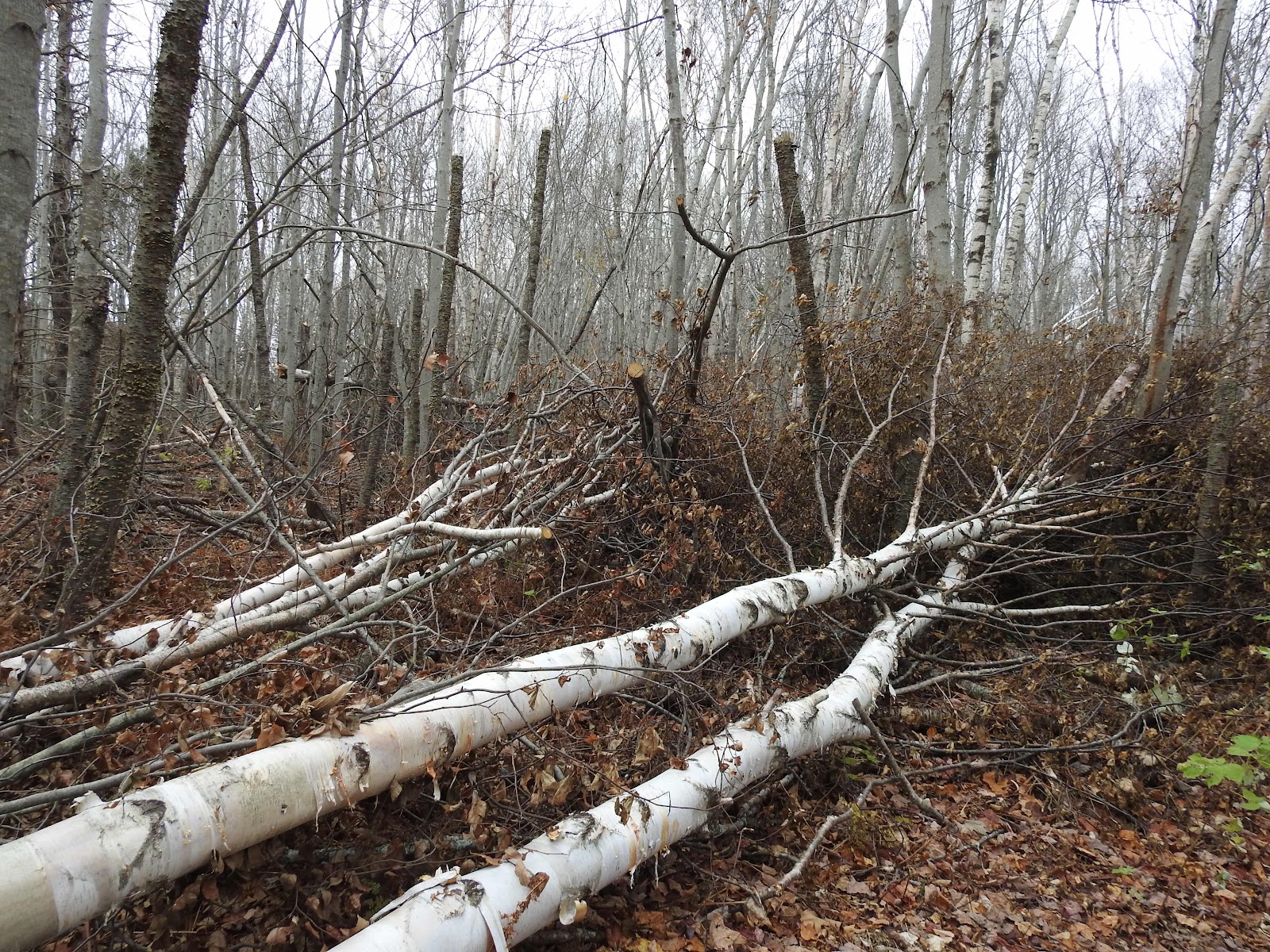 This park will be fun to explore during the various seasons and to watch the mountain bikers as they pursue the trails of various levels of difficulty.

Hi Marie, This looks like a great place for you and your husband to explore. I look forward to your photos in the different seasons. Have a good week.

I'm glad there are a few places where you can find some "hills" to climb on your lovely island. I so enjoy visiting it through your blog, Marie. Thank you. :-)

That looks great for the bikers.

How fun to have another place to explore. It looks like the mountain bike trail would be a challenge but fun.
Thanks for sharing. Sad about all of the trees getting knocked down by the horrible storm.

Looks like a nice spooky place for a zombie or ghost movie.
Oh, those poor trees. I would have to take some home.
Let them try and turn them into something.
too precious to waste.

That looks like a fun place and the bike trail was a little (a lot) challenging. I don't know if they had mountain bikes when I was a kid. We probably just tried it with regular bikes. I think bike riding is such a great treat. Speed, wind in your hair and the beautiful outdoors.

There are mountain biking trails in our local woods too. Some of the paths are scary! While I can see the fun in going down - if you're brave - you then have to push your bike all the way back up!

The mountain bike trail looks more challenging - and much more interesting! - than the long straight path. What a wonderful park to explore. I, too, look forward to your different seasonal photos of the place. Your photos always make me feel like I am there with you :)

We know that you'll be exploring this area a lot. :) I love those signs at the beginning of the trail.
Have a wonderful new week.

Quite a place to explore!

Walking in among the trees is just the best. When I go for a walk at our local lake, I ally]ays have to be a let to bikes and mountain bikers. I have found, though, that they are all fairly courteous.

Thanks for walking a mountain bike trail, to show us what it's like. My grandson is an avid biker and even has mountain biking under his belt, but he's more interested in regular bicycle paths. He's about to go to Vietnam and spend sixty days biking the HoChiMin trail. He will be 18 when he gets back.

i hope you have fun exploring this new to you trail!!

it's sad to see those pretty birch trees down!!

Looks like a great trail to walk, although I am not sure that mountain bikes are a good addition to the mix of uses. Great that the Rotary Club supports it.

Looks like quite a challenging trail Marie, how perfect for a pair of keen walkers 💜

You are blessed to have such a lovely place for walks Marie! I love having the chance to see your photos! I am not blogging right now but may came back later. Have a wonderful week Marie!

It will be an excellent place for photo opportunities, too.

There's a set of new trails near here too, but I probably won't be walking them until the spring. That mountain bike trail certainly looks challenging. I'm not a biker, so i would be trying to walk it too.

Great trails.
I would love to explore that trail.

The trail looks like fun, just watch out for the mountain bikers coming up behind you. I like the cute signs, a pretty walk. Enjoy your day!

i loved these trails through woods Marie :)

thank you for taking along