Georgie’s nose led the way as we walked the Parkside Trail at Bonshaw Provincial Park. She sniffed her way, 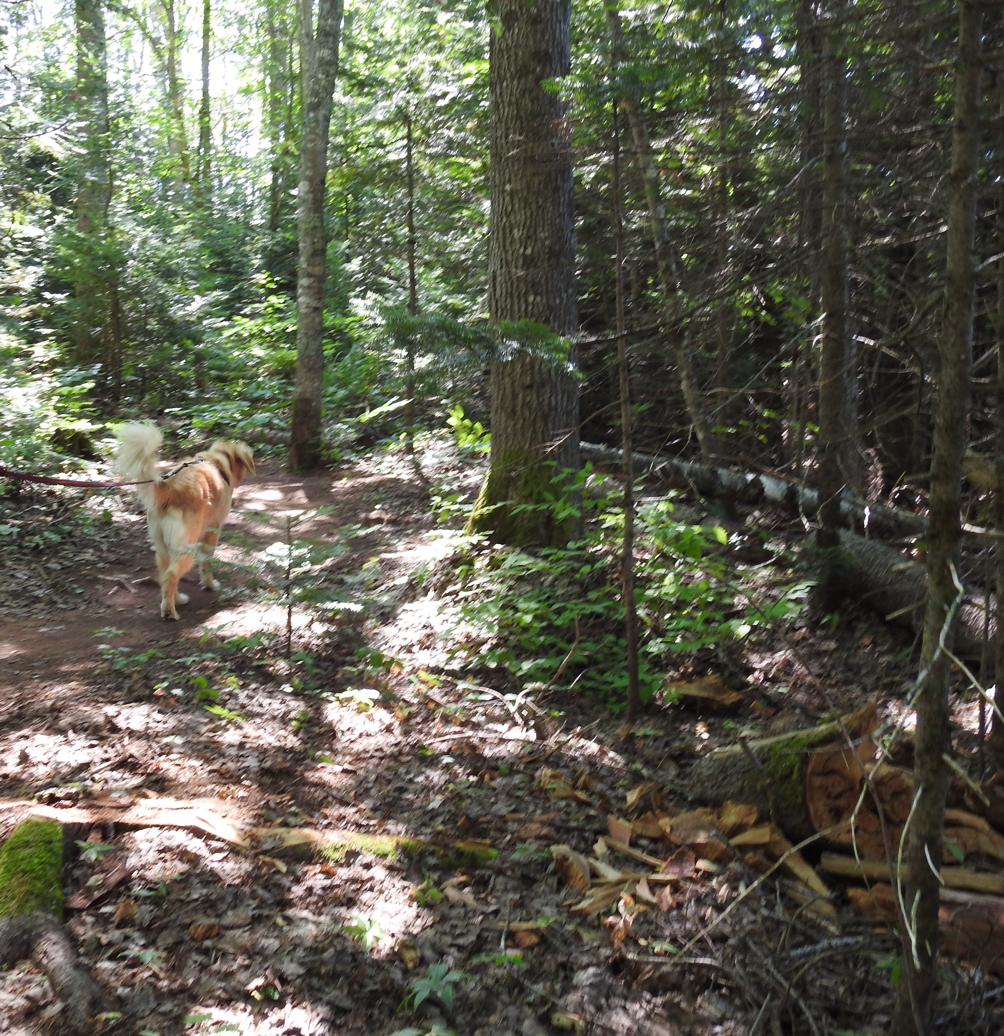 always anxious to move forward as my husband and I stopped to take photos. Georgie wasn’t interested in the greenery like we were.

And it was green, the understory as verdant as the canopy. The trees were huge, in diameter and height and their various shades of green were backlit by the sun. The light through the trees cast shadows like silhouettes on the trail. Where the light had a larger path to the forest floor, young trees bathed in its glory. 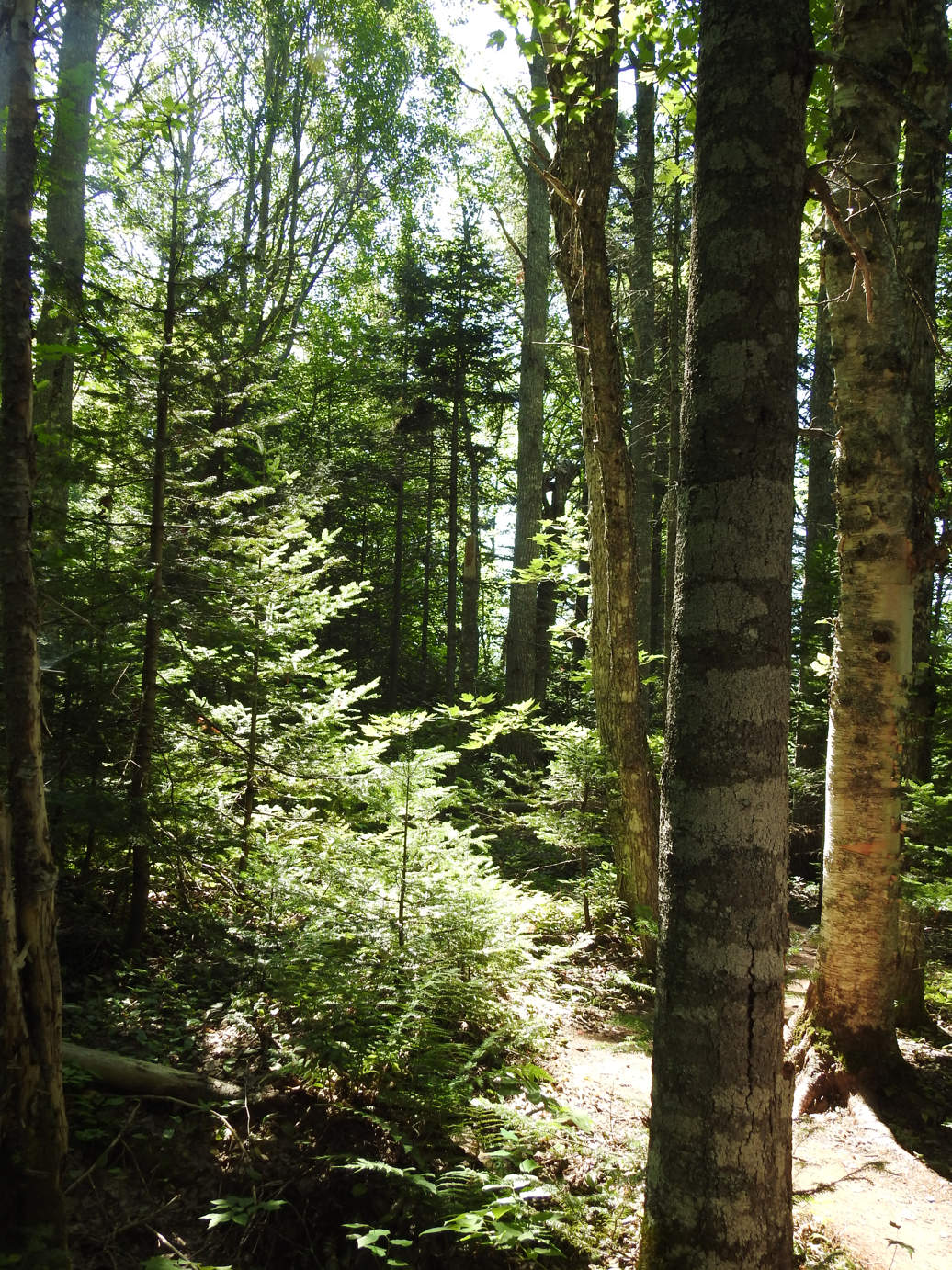 The forest floor had ferns in abundance, 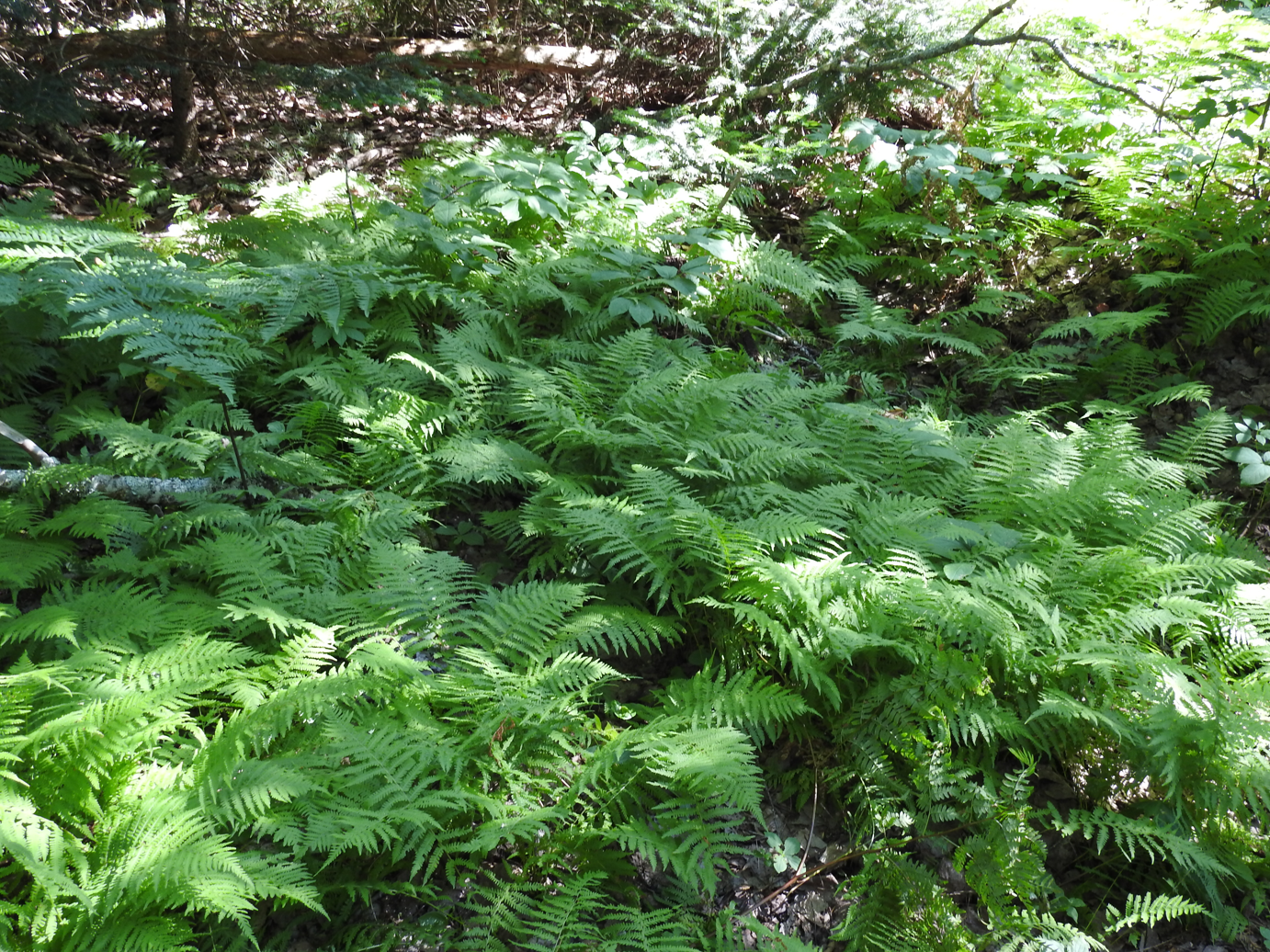 but small plants and shrubs were everywhere as well. Young trees waited for their chance to bolt into the canopy when the older trees relinquished the overhead space.

Looking up, the sun through the leaves created a green glow. We paused and took in the scene until a chattering squirrel broke the reverie. There was a stand-off between Georgie and the red rodent. Later, Georgie spotted a toad which crossed the trail ahead of us. The toad stopped, camouflaged amid the dead leaves. 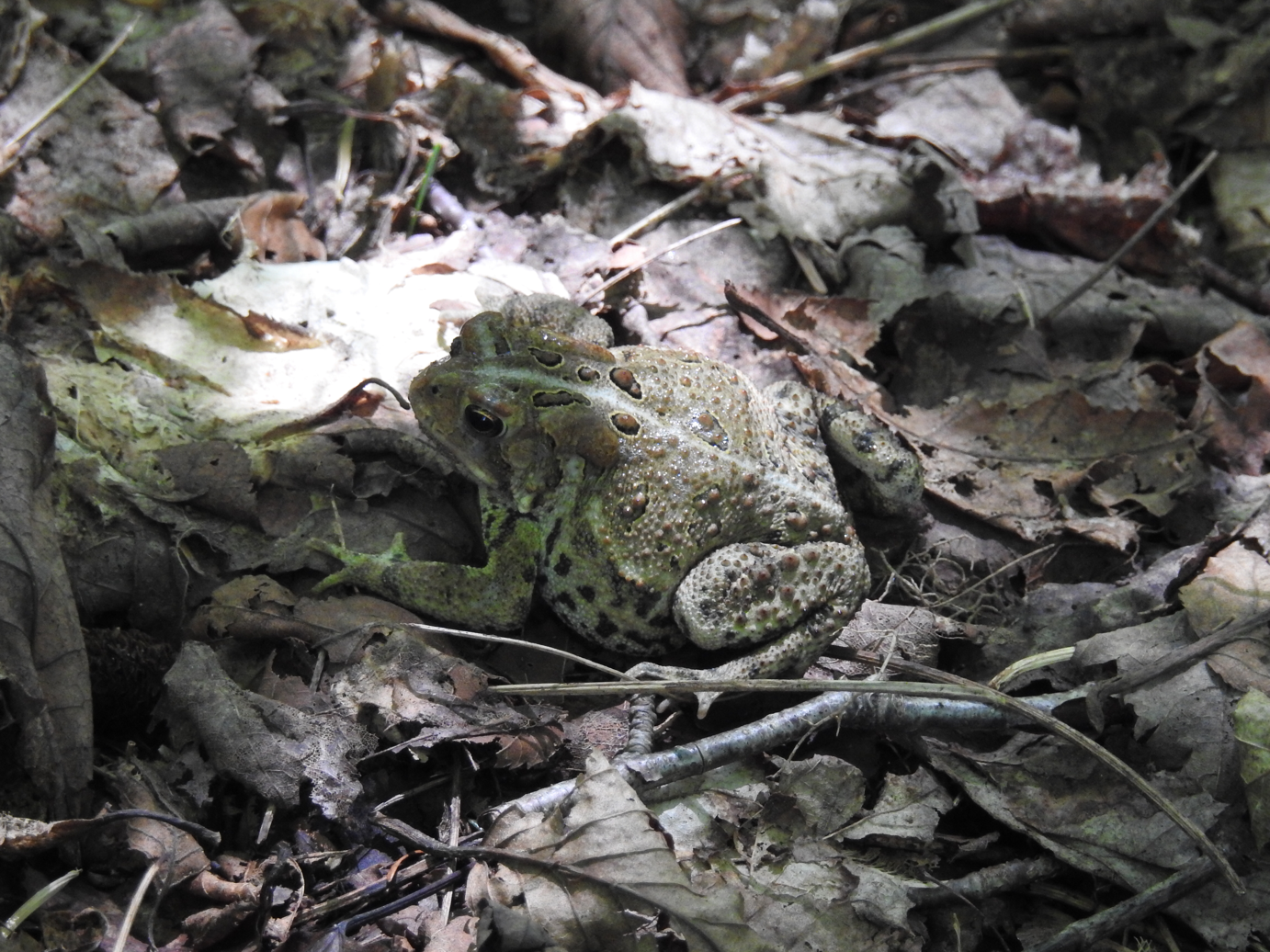 It remained motionless as we took photos and restrained the dog.

Back at the park, we had lunch under a huge spruce tree, on a table and benches cut from trees. Georgie made a new friend, 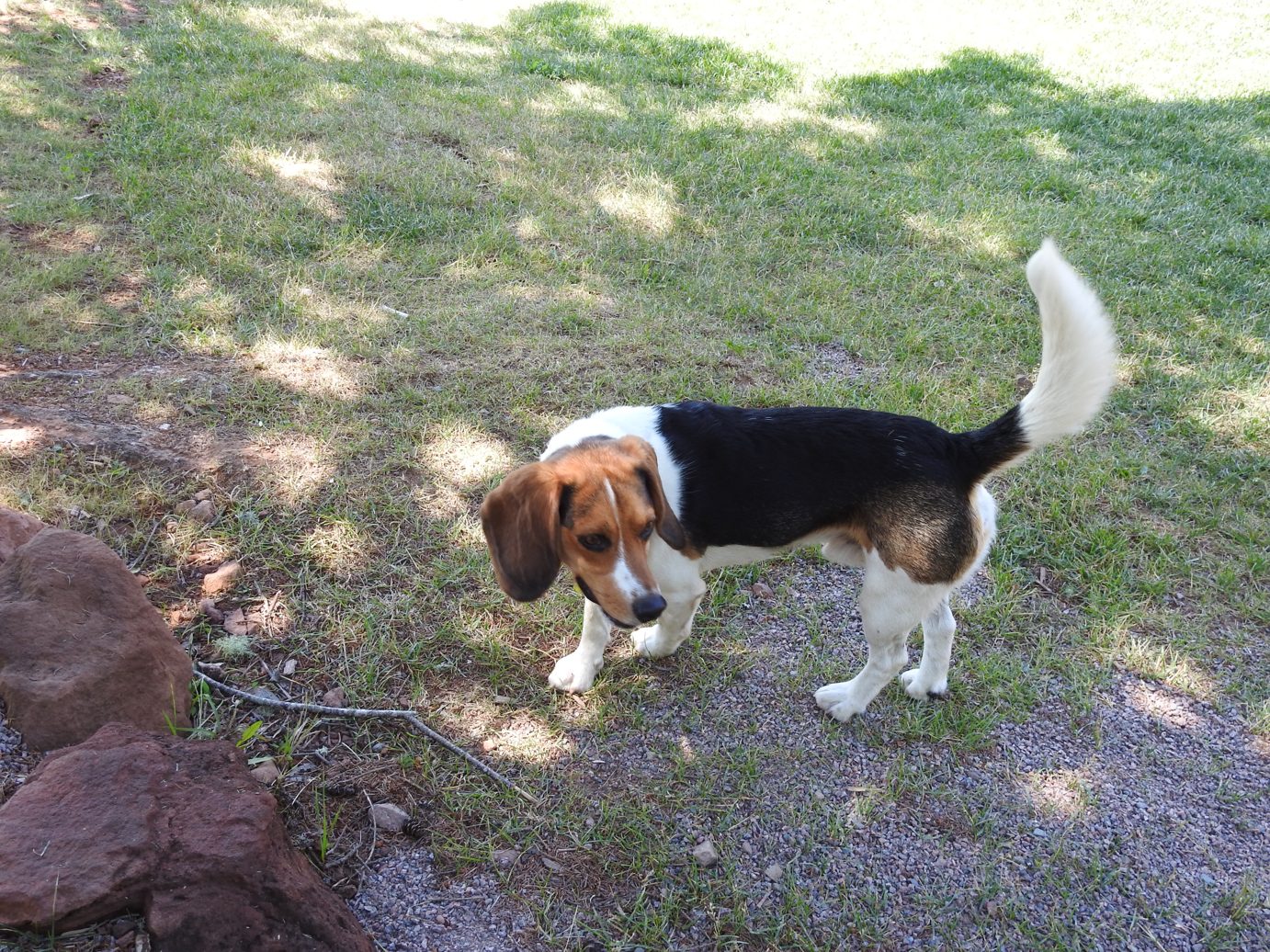 while we basked in the sense of well being which always accompanies those moments bathed in green.

It has been a very verdant summer.

What a beautiful trail and a nice place to hike and have lunch. Nature has its way to sooth our souls. Love the little toad, he was probably nervous with everyone passing through. :)

As I said in my post yesterday, it's good for the soul to walk in such beauty. I love the shadows and all the green. Thank you for taking me along on your gentle and renewing walk. :-)

your descriptions were as amazing as the picture - you have a way with words!!

what a beautiful place - tell Georgie to slow down - so many pretty things to see!!

Absolutely Marie, it would seem almost impossible not to feel relaxed after a walk like this.. and then lunch, perfect! I like Georgie's new friend very much, looks like my Buffy Beagle from years ago .☺ Incroyable images as always, so much detail on the toad!

How beautiful. Our green is browning around the edges, and I see fall coming on.

How absolutely glorious. It is still dark here, but my tree hugging self loved the green, the trees, the light...

Seeing these pictures made me let out the big sigh of relief I always did whenever I'd visit a forest. There aren't enough of these places where I live now. The feisty little red squirrels are an added bonus of any good forest.

A walk among the forest trees is very satisfying for the soul, especially when you have a doggy companion. Which reminds me, I must make a date to be taking TessaDog (my grand-dog) to the nearby forest soon.

We haven't had much rain but enough for this area, AC.

The toad crossed the path and stood perfectly still among the dead leaves under a branch, Bill. He was difficult to see. He knew the danger it seemed.

On such a walk, I feel any tension leave my body and each breath feels good, Jan. You understand that feeling I am sure.

Thank you, Debbie. Georgie is gone home again, so our next hike will be at our own pace.

The little beagle was a cutie. It was strange his owners let him loose in the park though. He went back to them eventually, they didn't come looking for him.

Oh, Joanne. I love the fall but I hate to lose these scenes for another year.

EC, it is an incredible trail and there are so many more in that area. We are looking forward to another hike soon, without Georgie this time.

He was a feisty one, for sure, Ratty. We enjoy meeting them on our hikes.

Beautiful shades of green. Peace, harmony... that is what we feel looking at these great pictures. Peace and harmony that so many desire. : )

Nice to see the crops in your part of the country! Good shots.

I swear the green colours of the woods are good for us.

I think so too, FG. I wonder is it the oxygen?