On a recent drive through the countryside on Prince Edward Island, my husband and I stopped to observe the colour and appearance of crops on both sides of the roads. 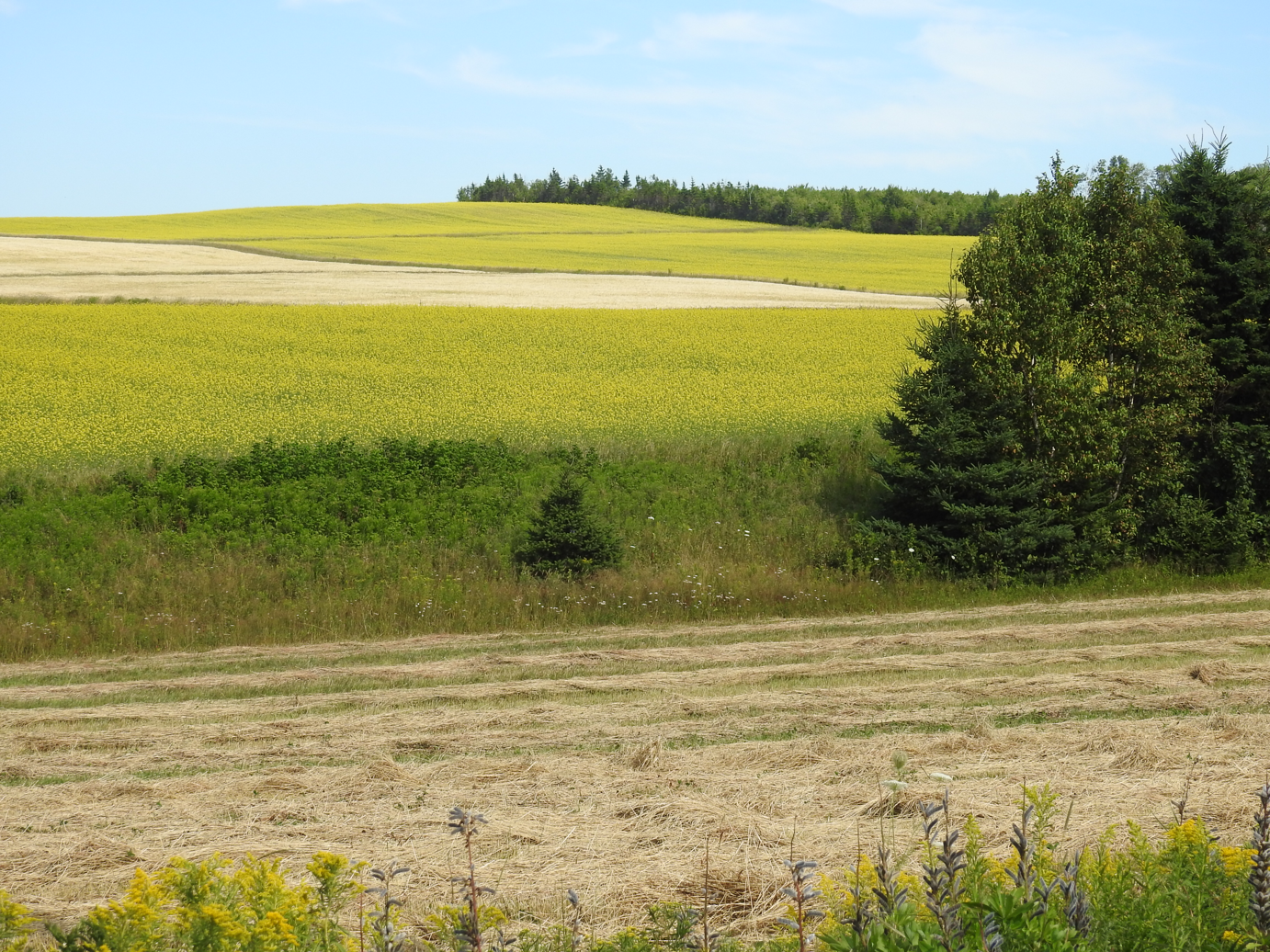 Rural Prince Edward Island is farmland, rolling hills or flat land and along the coast, the sea is the backdrop.

Haying has been underway for some time now and potato fields are in bloom, 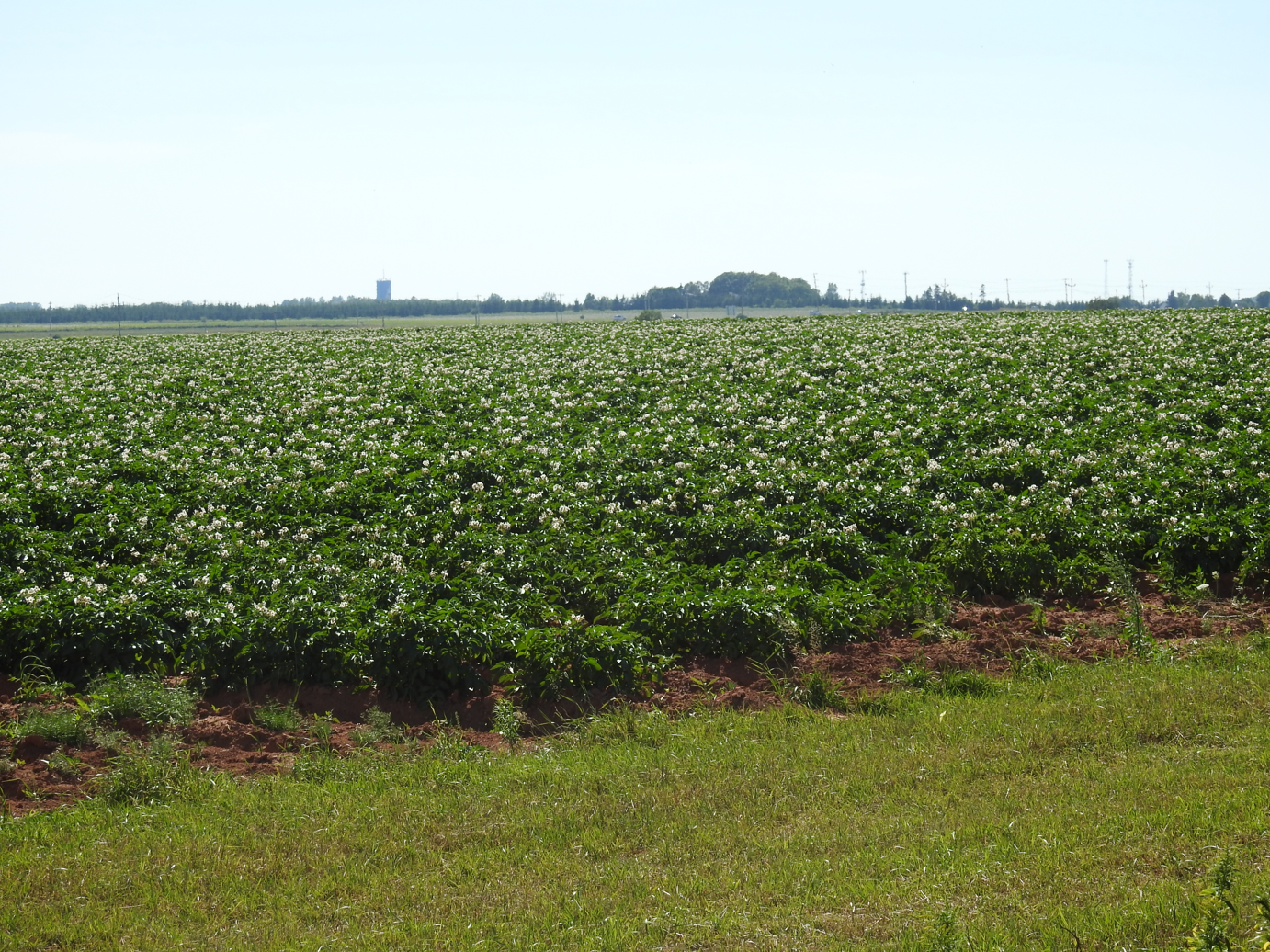 as are the canola plants. 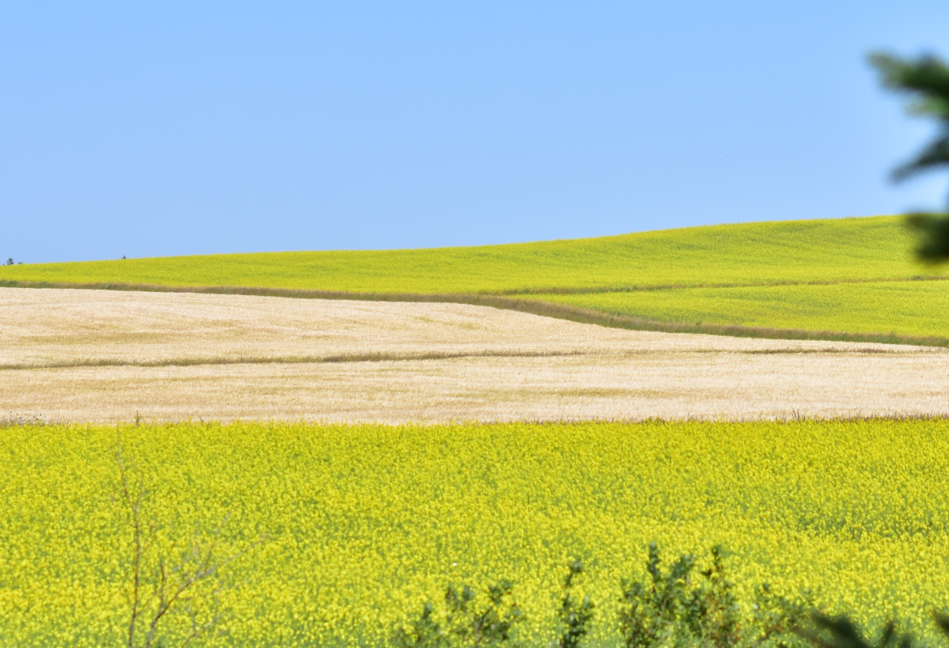 Or is it canola? It is hard to tell these days, as farmers are also planting mustard which looks like yellow blooming canola to the untrained eye.

Mustard plants are a natural fumigant to pests such as wire worm which damage potato crops. Farmers grow the brown mustard plants, then plow them under. During decomposition, the plants release the bio-fumigant into the soil which controls and kills insect pests. Such natural pest control is great for consumers.

We recently saw another unusual plant in the fields as well. This one is buckwheat, 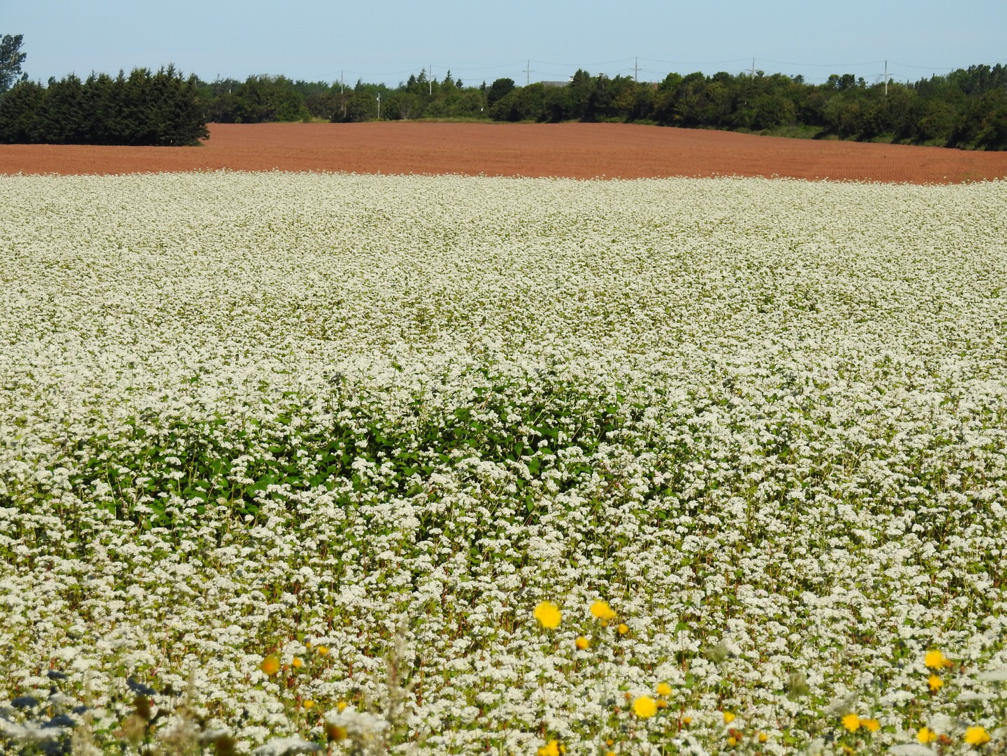 which has the same effect as the mustard plants. Both buckwheat and mustard plant blossoms are attractive to bees. Honey production is increased in areas where these plants grow. 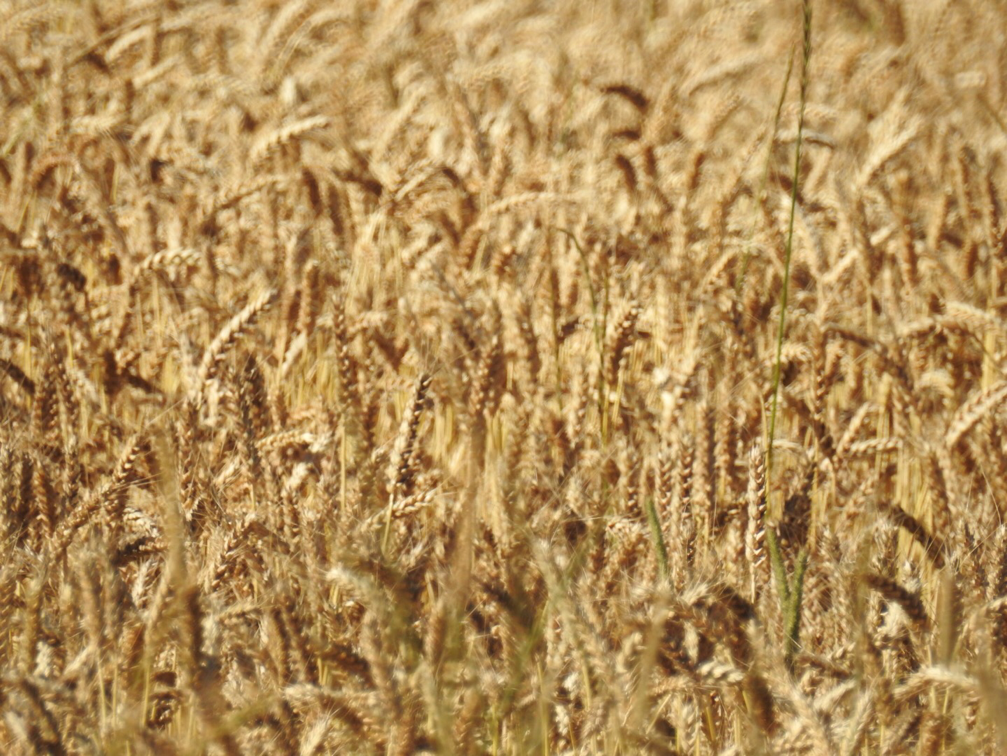 and so is barley. 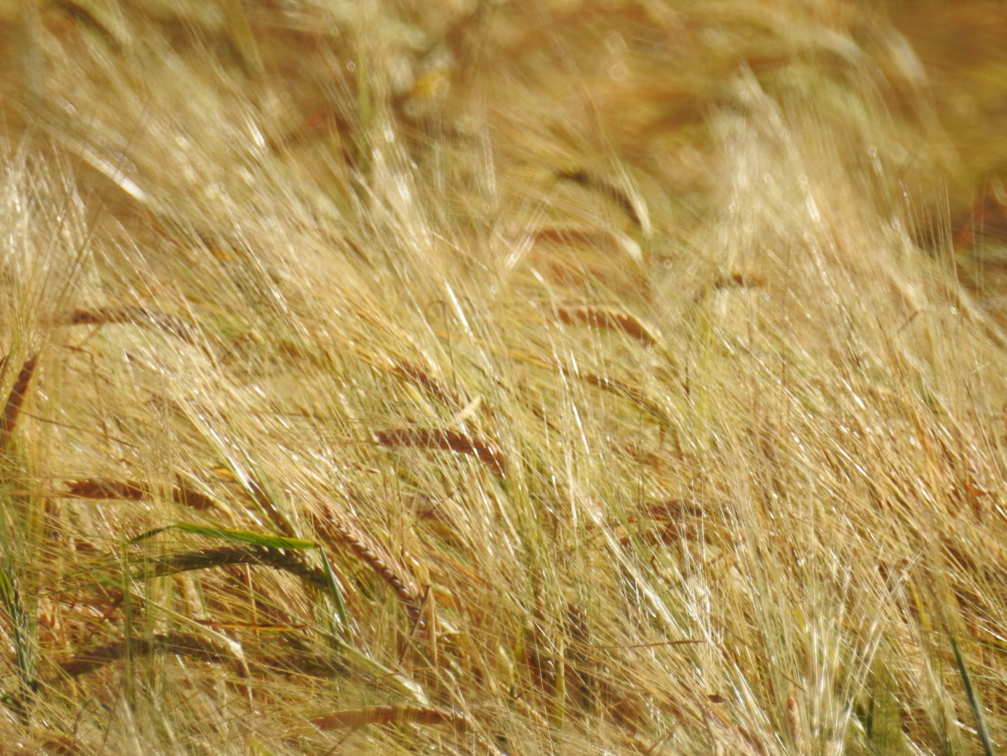 I find it impossible to identify them from a distance.

Clover, a cover crop used in crop rotation to help restore nutrients to the soil, is in bloom as well. The purple fields line roads and shoreline. 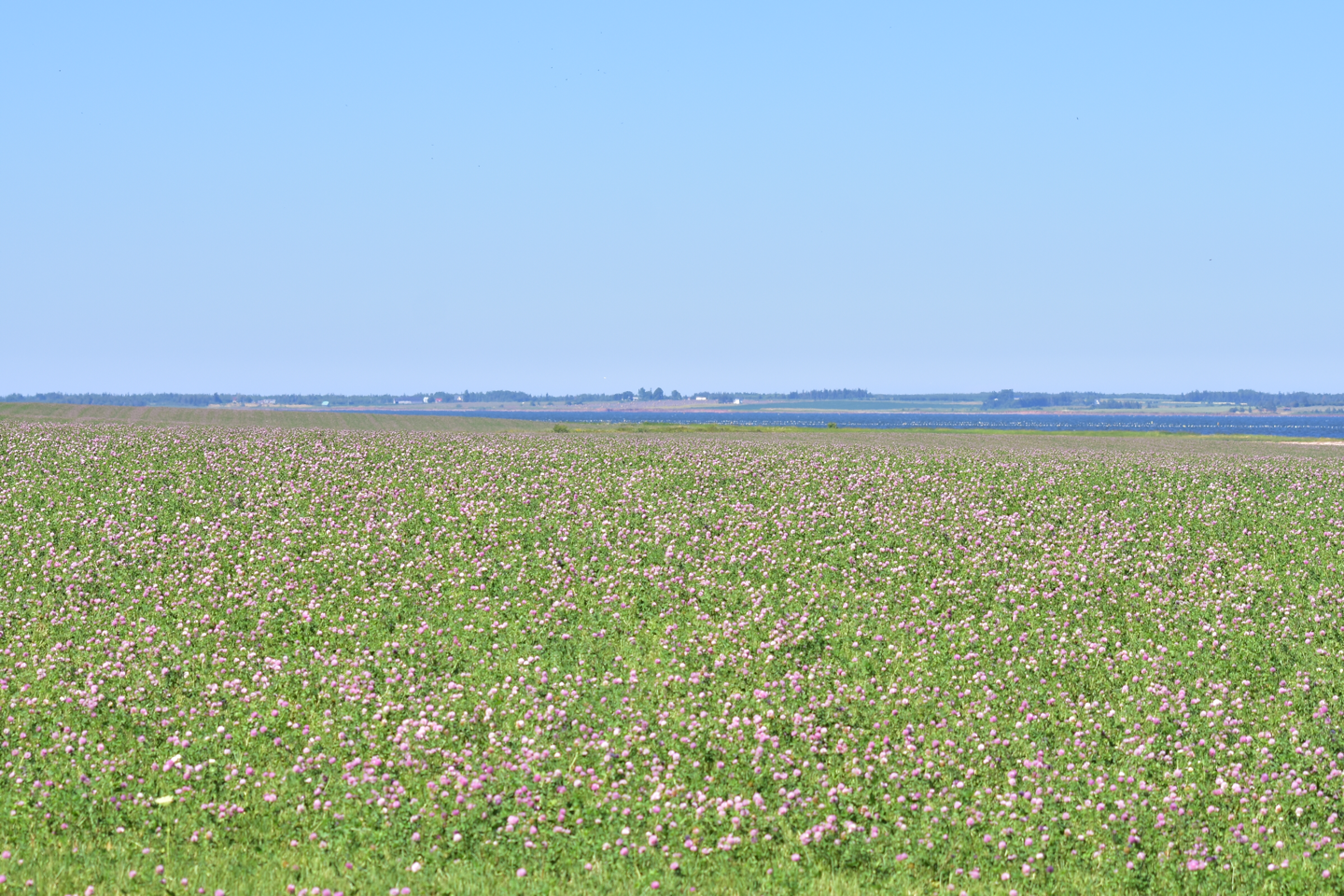 The most curious discovery was a field of peas, a new crop for the island, to supply a new processing plant in western PEI. 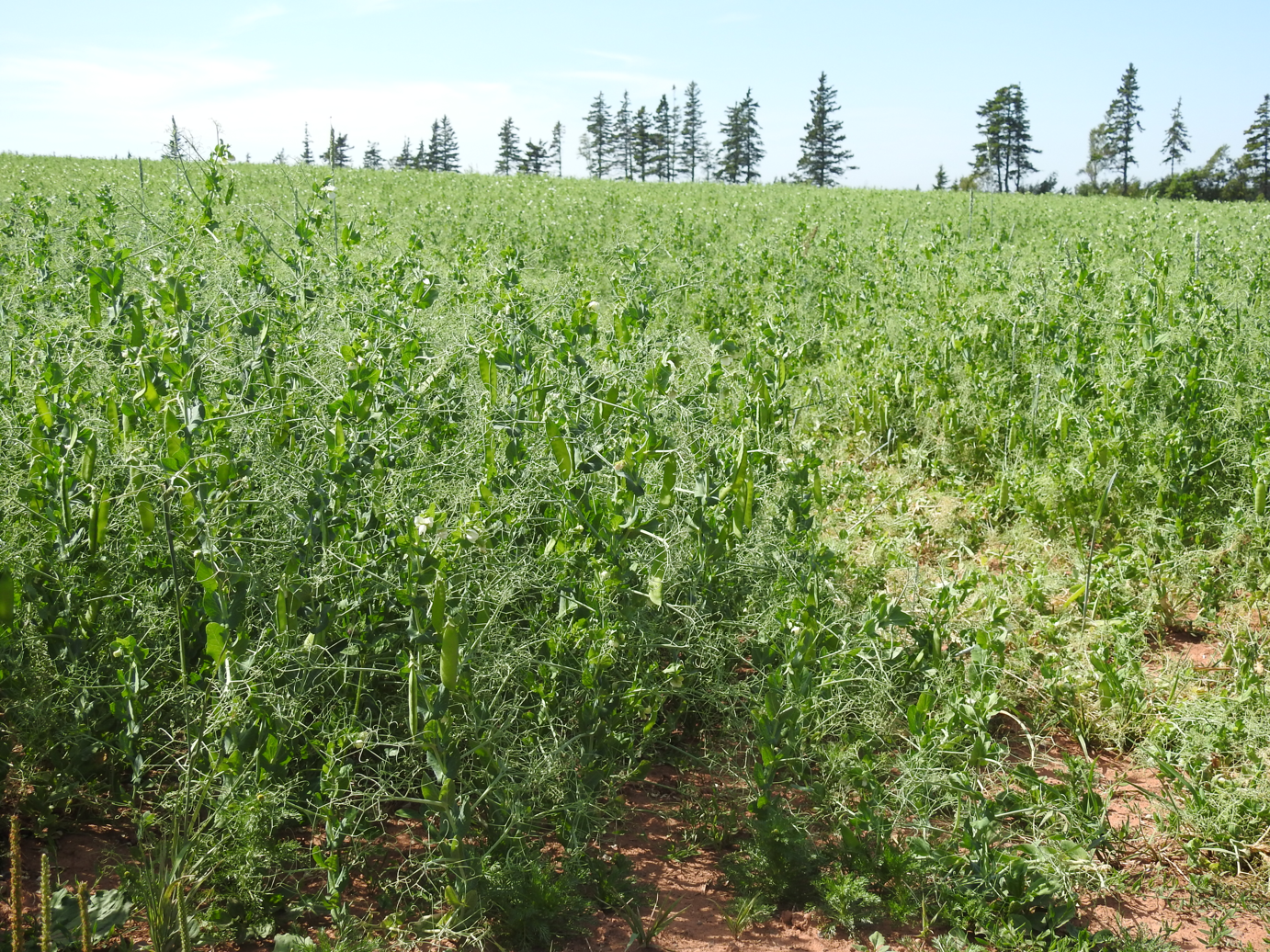 These are a fraction of the crops grown on the island. However, the expansion of the industry to include peas and the bio-fumigant properties of and bee preference for mustard and buckwheat plants are all great news. Now if we only had some rain!

Thank you for the tour through your fields, Marie. PEI is a lovey place to live. I didn't know that about mustard plants being natural pest control. I like learning these things from you. :-)

I love peas! Yea. My friend and I saw a new crop once. As a farmer's daughter, she was mystified, and called on the farmer to see what he was growing. They were radishes, and he would plow them under to keep the soil arable.

Oh I do hope that you get some rain, all that extremely clever planting deserves to succeed. I wonder if we plant mustard seed and clover for those reasons, must Google ☺ Excellent shots here Katie.

Thank you Marie, for putting out this beauty into the world.

Lots of info I did not know!!
Thanks!
Yesterday, on my way to Fergus I took some pics as well of the big yellow fields. Not as beautiful as yours.
: )

You do live in a very beautiful area.
Natural pesticides are a huge plus.
We get most of our rain in winter. This year has been very, very dry. I hope that you, and we, get some. Soon.

That is some great information you shared about the mustard seed and clover and such beautiful landscape. Great photos Marie.
Hope you get the much needed rain asap.

Green manure - a blanket term for all those crops that are turned over to help the soil.
We have rain today - much needed rain. This winter has been too dry. We still remember the drought back in the 90s when our winter rains failed for 10 years. Not good so as annoying as it can be at times I say - Rain come on down 😊
Hope you get some soon.

I didn't know the term green manure, Cathy. Thank you.

Thanks, Bill. Rain is needed!

Parts of Canada have been wet, others dry this year, EC. The weather is more unpredictable than ever.

The yellow fields are plentiful all around the countryside this time of year.

You're welcome Cathy. There is so much beauty around us!

It is clever planting for sure, PDP.

The farmer's daughter in you must love excursions like this one, Joanne.

There are experimental farms around the country doing great research, Jan.

It's interesting to see the crops in your area, which are different than in mine. Where I live we mostly have corn and soybeans.

What a beautiful country side filled with colours and life. It must have been some adventure to see. Warm greetings and lovely photos!

We have those too, Ratty. Lots of corn and soy grown here as well.

That's wonderful that they use mustard as a pesticide instead of chemicals. I wish we could send you our rain. I'd love a few dry days to get the grass cut.

It is always lovely to drive through the countryside here, B.

I have no idea how Marie became Katie 😀

beautiful crops and fields, farming, such hard work!! i don't know if it's canola!!

That's so interesting to see such a varied number of crops! Sarah x

This is marvelous as my husband and I play a guessing game with crops all the time. I knew PEI grew canola, but did not know how close mustard was in appearance or why it was planted! Thanks.

I love the way your farmers care for the soil. It speaks very well of the people who live there ... like you and your hubby !

Wish you could send the rain, Danielle.

My grandfather had a family farm. It is hard work indeed, Debbie.

And there are more, Sarah.

What I thought was canola all these years, was probably mustard, Tabor.

There is still lots of spraying here, Ginnie. Lets hope the tide is turning for some of it though.

It was great to hear your facts on all the different crops and crop rotations that are being done in PEI. I loved seeing the picture of the hay fields next to the ocean, just lovely! I do hope you get some rain soon, we have had a very dry summer here as well. My potatoes bloomed about a month ago and are producing potatoes now, in fact we are eating some for supper, as well as corn from my garden. I'm happy with my harvest this year :)

We've been enjoying our produce too, Marilyn. The tomatoes are ripening now. Enjoy your potatoes and corn!