He sat on the pavement, near a bend in the road. We hoped he would move quickly as vehicles approached. He did. Off he went into the grass on the side of the road. 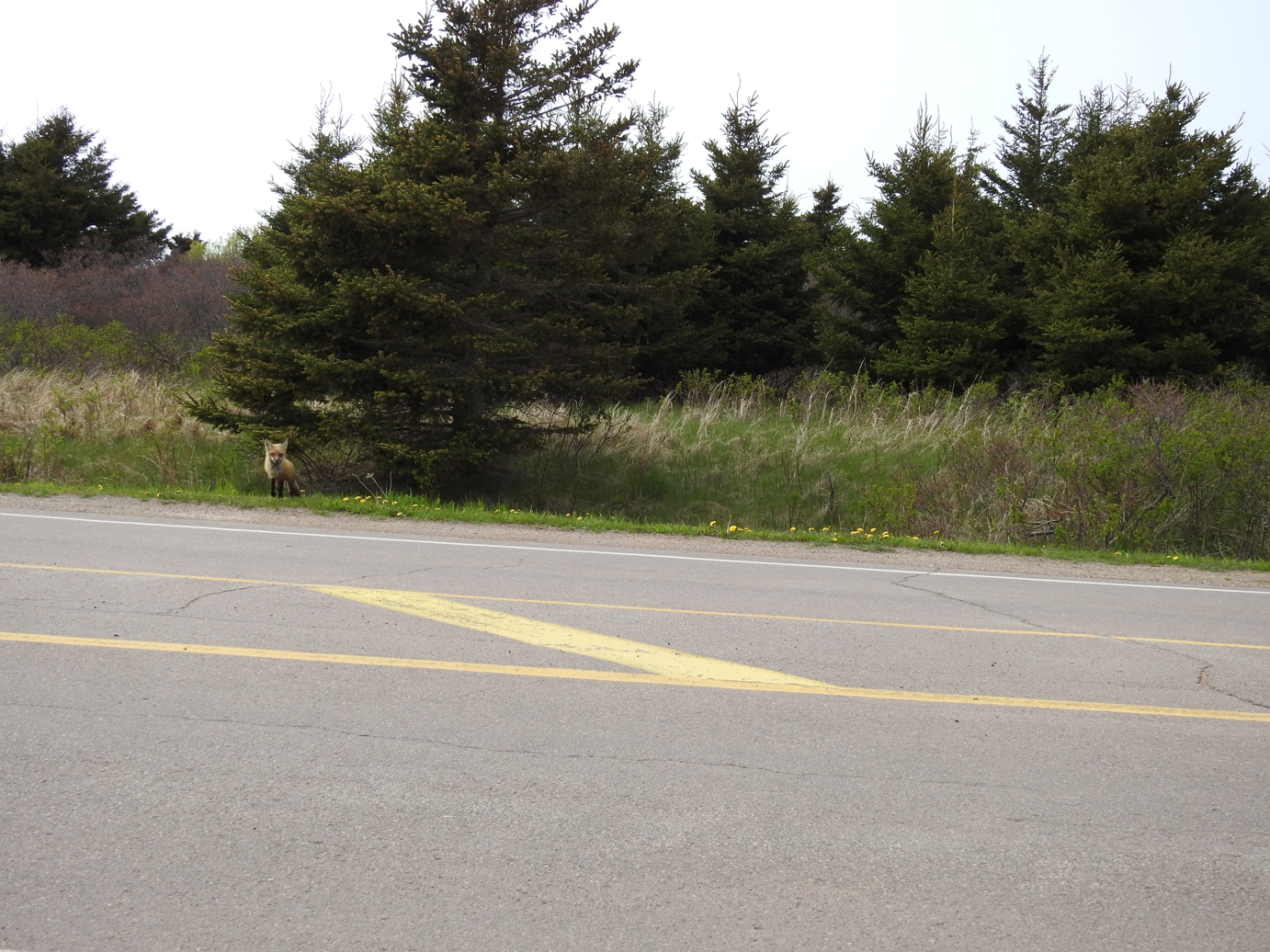 My husband tapped on the side of the car and he approached. He expected food. Foxy was wary at first but I stayed by the car door as he approached. 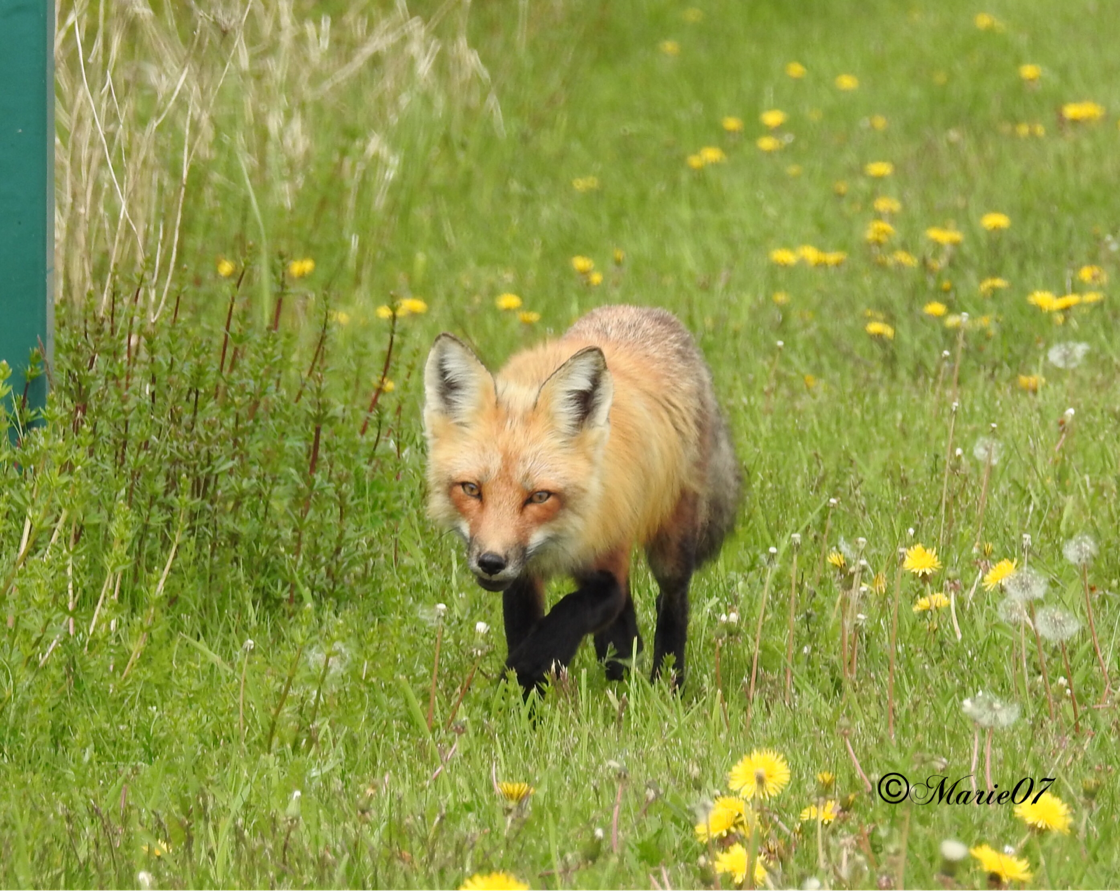 It took seconds for him to realize no food was forthcoming, just the clicking of the camera. 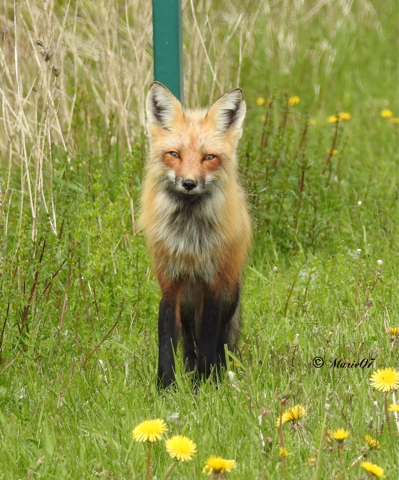 Then he crossed the road. 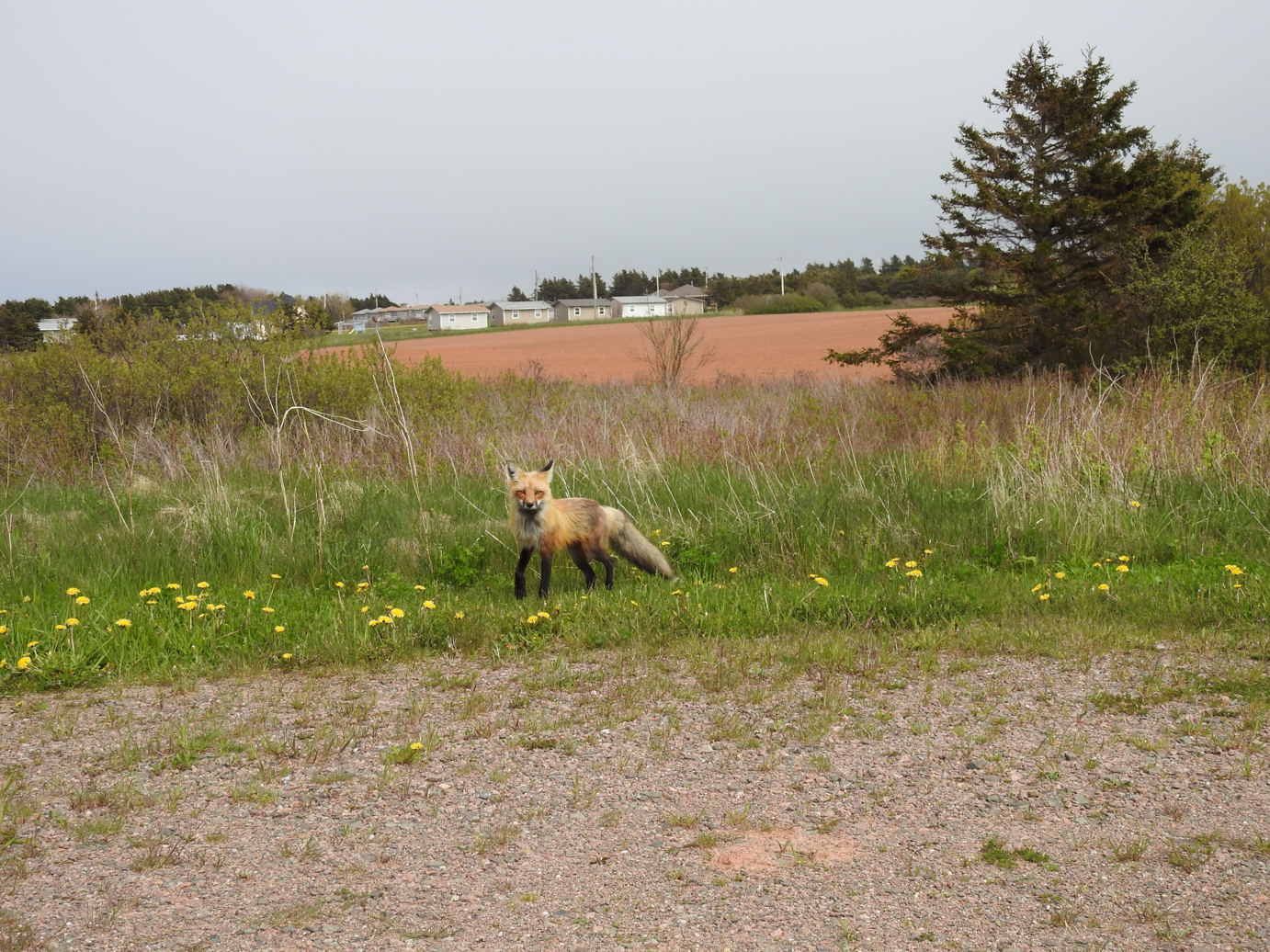 The red fox was multi-coloured, blond, orange, red, black and gray. The colours blended into each other except on his legs where he wore black tights. Foxy was thin but the fluffy fur hid his size depending on the view you had of him. His face was a study in symmetry, down to the individual hairs, such as the whiskers. This encounter was the closest we had ever been to a fox. We watched as he checked us out several times before he finally walked away. 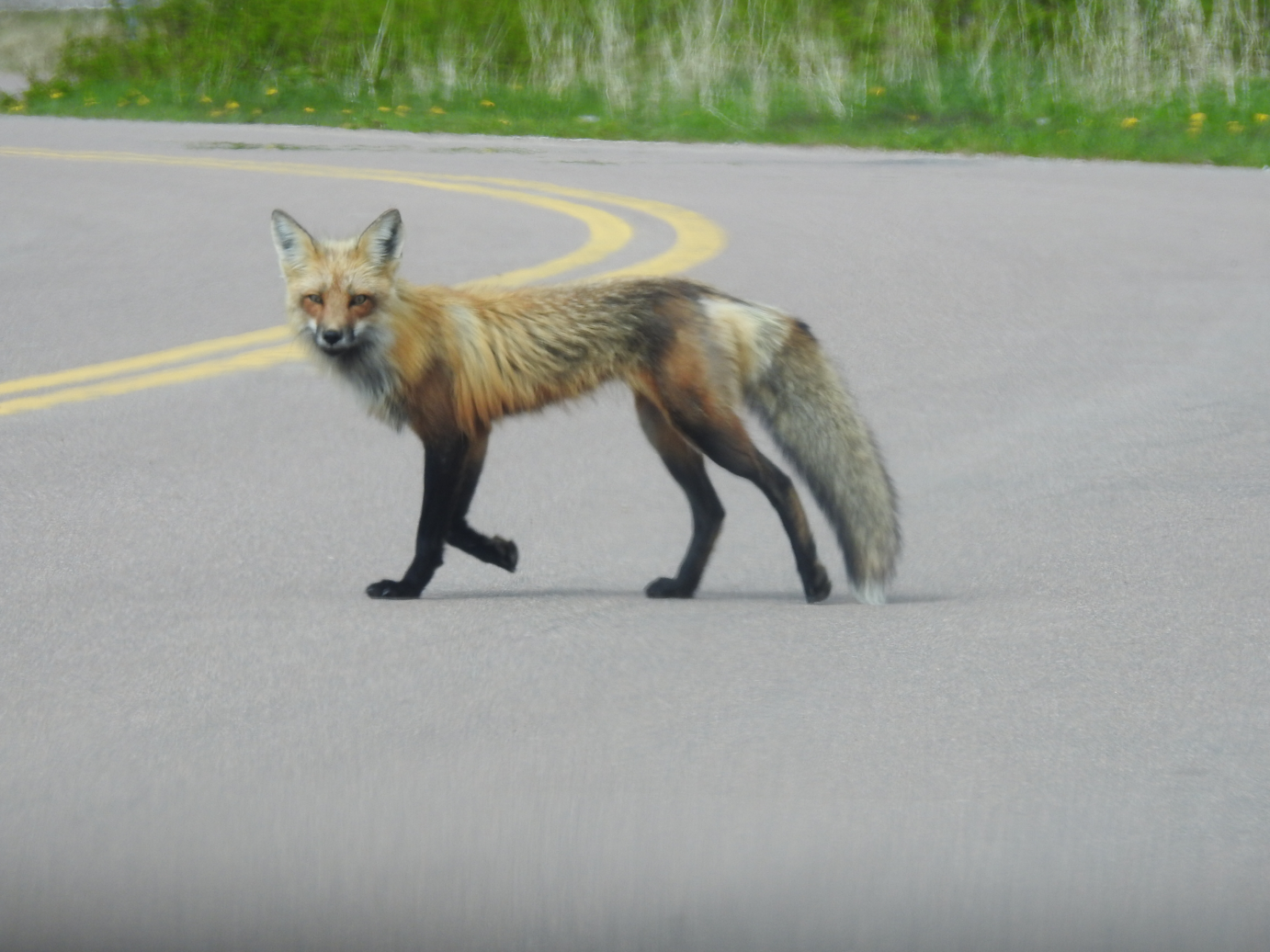 Posted by Marie Smith at 04:06
Email ThisBlogThis!Share to TwitterShare to FacebookShare to Pinterest
Labels: red fox.

He is very thin. I hope he finds a good meal soon. A beautiful creature. Thanks for sharing, Marie. :-)

Wonder if he gets fed by those passing by, he seems so fearless. Hope he hasn't forgotten how to hunt.

Oh my gosh he is thin Marie! It must be pretty tough out there! Incroyable photos, you've captured the essence of the fox beautifully, those eyes, they've seen a lot!

Great encounter. Our fox are extremely wary and since this is farm country, perhaps they have good reason to be.

wow, what a beauty...you got some beautiful pictures!!!

What a beautiful looking fox. You got some incredible close up shots, Marie.

So pretty. I hope he survives as his home becomes more encroached on each year.

He/she is very thin indeed. And beautiful. I hope he survives. And thrives.

I was surprised when I saw how thin he was too, Jan. Such a beautiful animal.

The wildlife biologists here tell us the foxes are opportunistic and will accept a meal if you offer. However, they are very capable of fending for themselves, Celia.

The eyes are incredible, for sure, PDP.

The foxes here live among us and aren't wary of people, Tabor.

He was far prettier than some other foxes I've seen, Joanne.

Thanks, Debbie. You would get great photos of the foxes here!

They are not wary of people, Bill.

Development is not as big a problem here like it is in many other places, Barbara.

I've wondered what became of him, EC.

Fox had that 'I've been tricked' look. A handsome little fella no doubt.

He is a handsome one, B.

Came from Blogoratti's blog where I saw your name.

That is quite a beautiful fox! You were very courageous. :)

What a great encounter, but s/he certainly doesn't look overfed. Hard life out there.

That's wonderful. I would love to see a fox. I hear coyotes at night here sometimes, but I never see them either.

She looked so thin, AC. You couldn't tell from the front because her fur was so fluffy.

There are coyotes here too but I've never seen them either, Ratty.

There is something so enchanting about an encounter with wildlife. Your's was fabulous. Great pictures of a beautiful being.

Such a creature is a natural wonder for sure, Linda.

Look at those eyes! You can see the "wildness" in them. But when I saw how skinny he looked, my heart broke for him. Life must be hard for some of these creatures but they must learn to survive on their own. God have mercy on them all.

He is a survivor, Ginnie!

I think I'm the only one who thinks that the fox is a pest - like a noxious weed it does so much damage it needs to be eradicated. Our Victorian government thinks so too. You might be interested in this link.
http://agriculture.vic.gov.au/agriculture/pests-diseases-and-weeds/pest-animals/a-z-of-pest-animals/red-fox
Cathy

Foxes here are at the top of the food chain with coyotes. They are protected and people love them.

Amazing photos he does look so thin. We have some that live close by. You do hear them in mating season and Tavi often finds their poo! Sarah x

There are lots of foxes here, Sarah. People enjoy having them around.