A day at the beach

Cabot Beach Provincial Park has one of our favourite beaches in the province.  We visit this area every spring to watch the lobster fishers leave for Setting Day, the first day of the lobster fishery. This past spring the channel from the harbour was being dredged at that time, so my husband and I watched the dredging too.

Now lobster season on the north coast of Prince Edward Island is over so it is quiet on the water today but the channel through the waterway is marked along the margins of the sand bars. 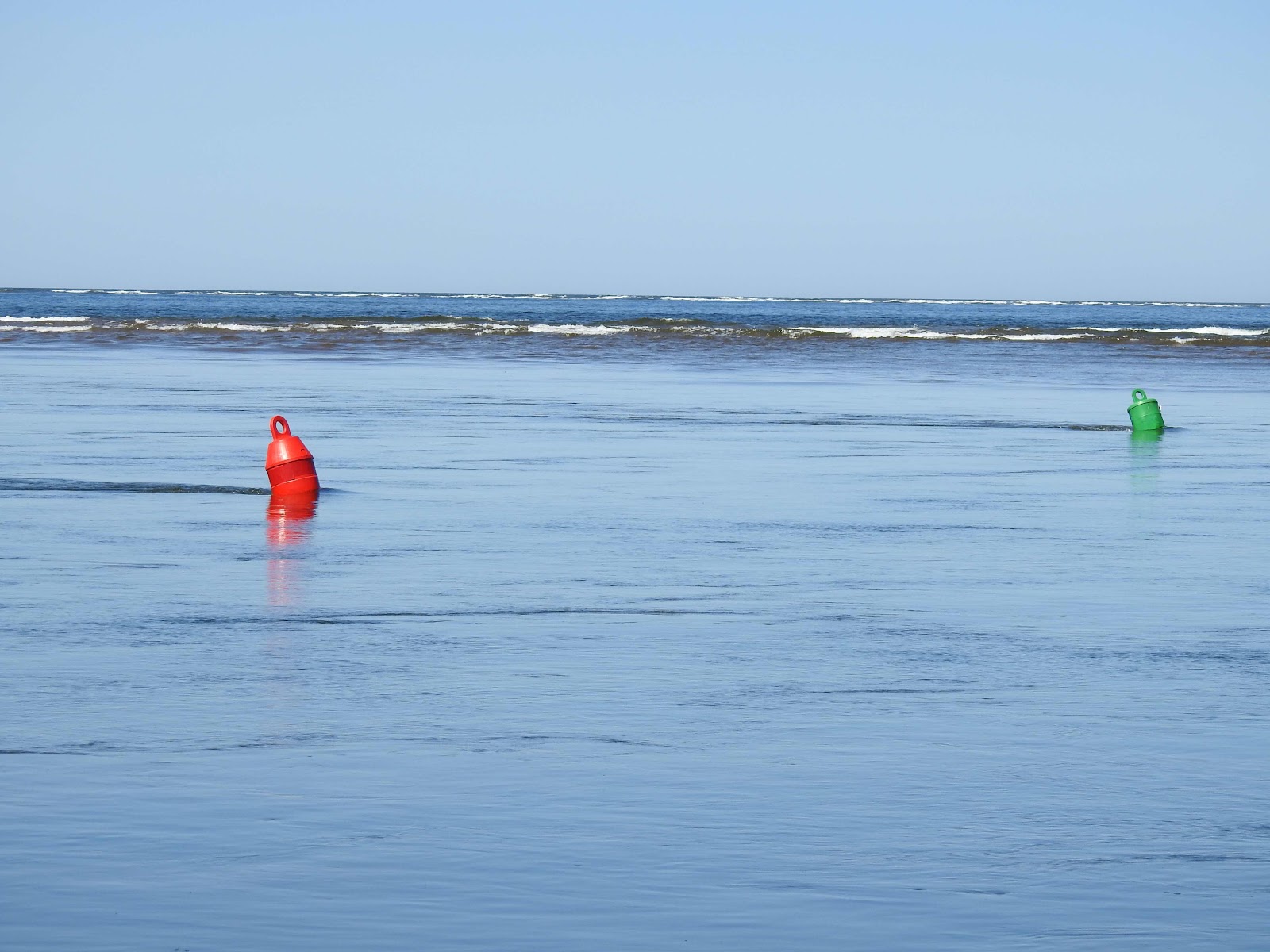 Last summer, the moving sand bars defied the markers and one boat capsized on its way into port, fortunately without injury.

As the tide recedes during the hours we are there, the sand bars become obvious as swimmers venture further from shore in ankle deep water. Seaweed is exposed with the lower tide. 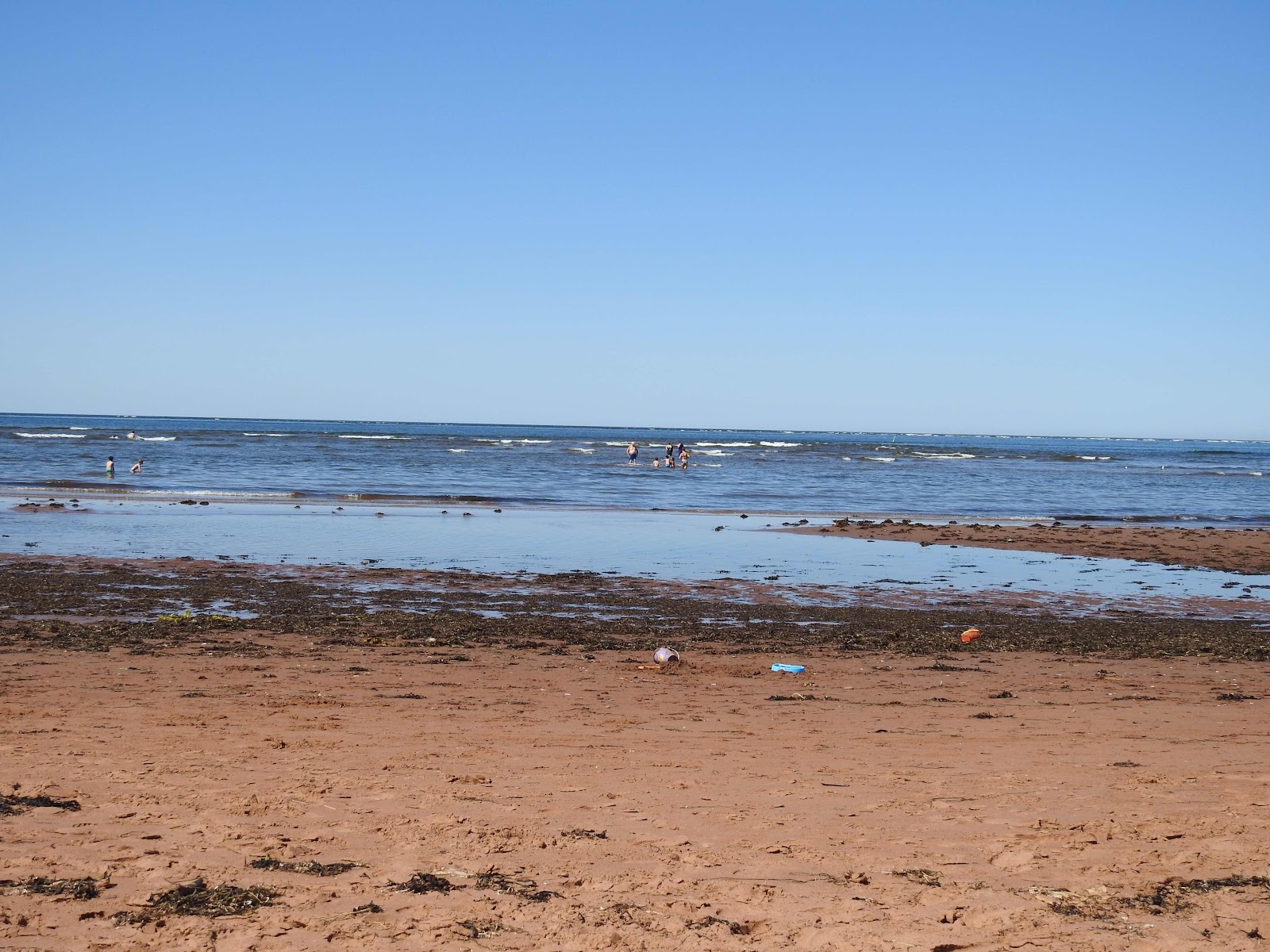 The Marram grass has grown rapidly since April, recovered now from the duress of winter. The grass is on the beach above the high water mark and over the sand dunes. 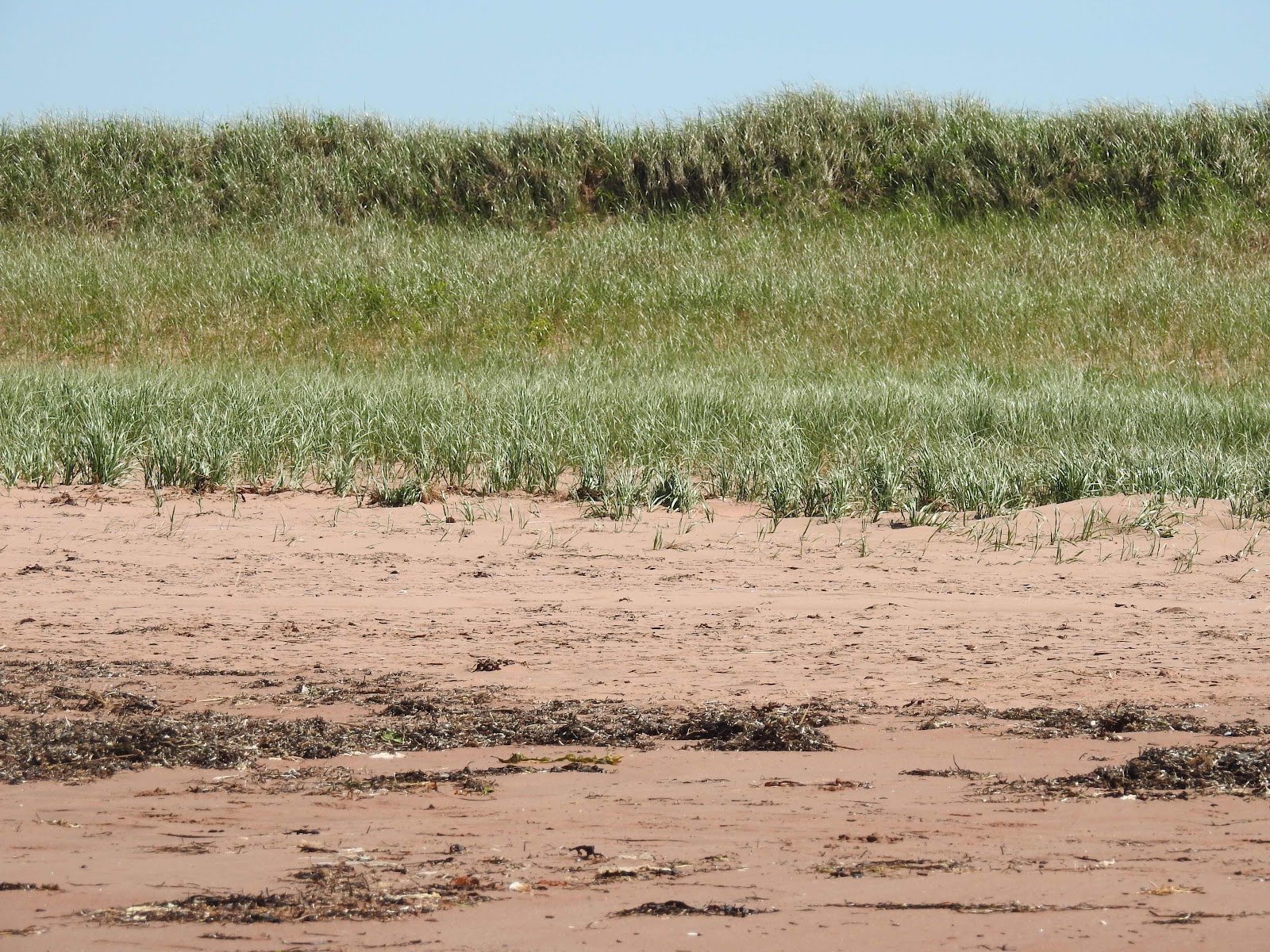 A walk further down the beach shows how the sand dunes are disappearing along the shoreline of the channel with each storm. 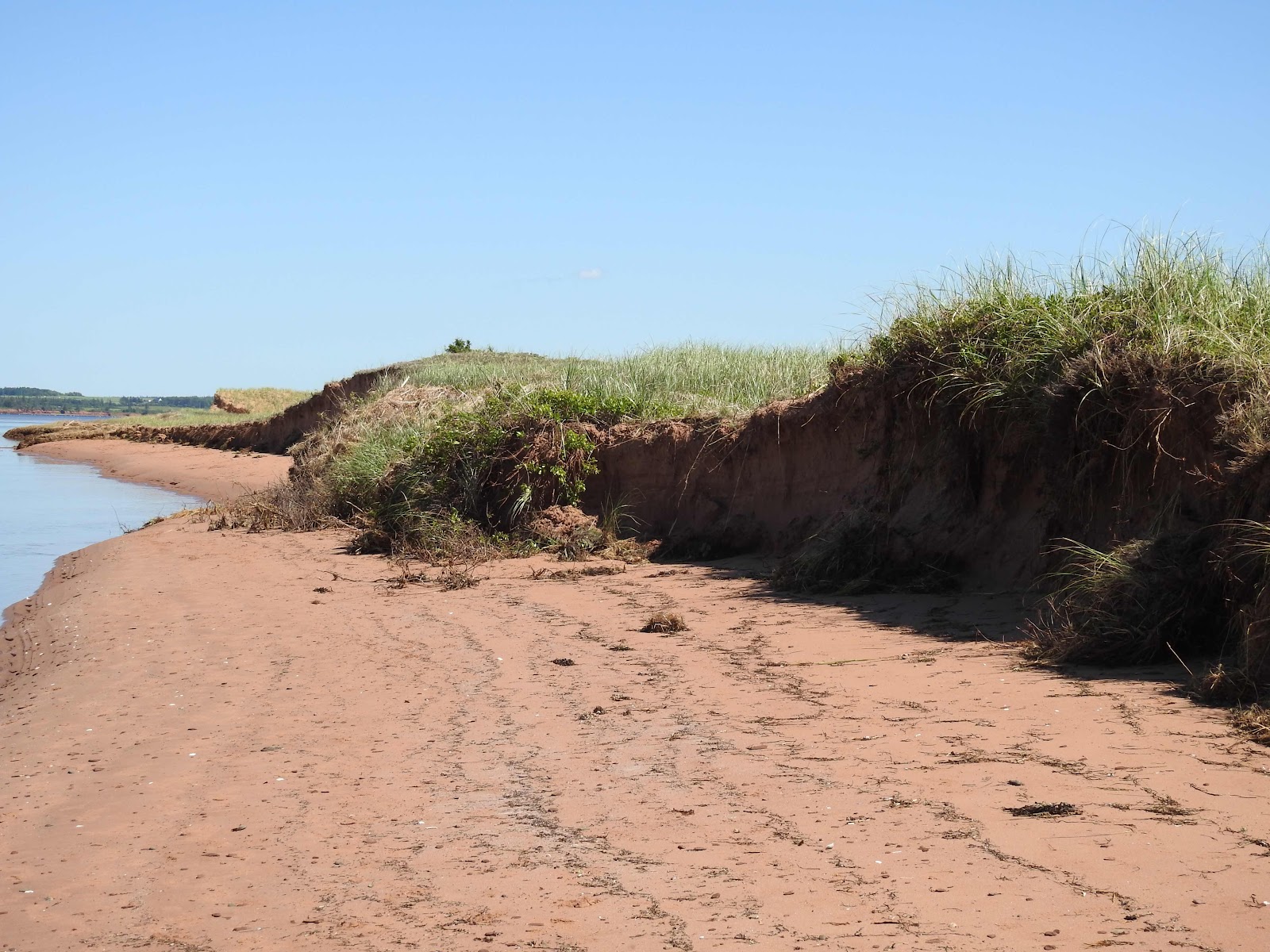 I wonder how long it will be before the small stand of trees disappears into the sea. 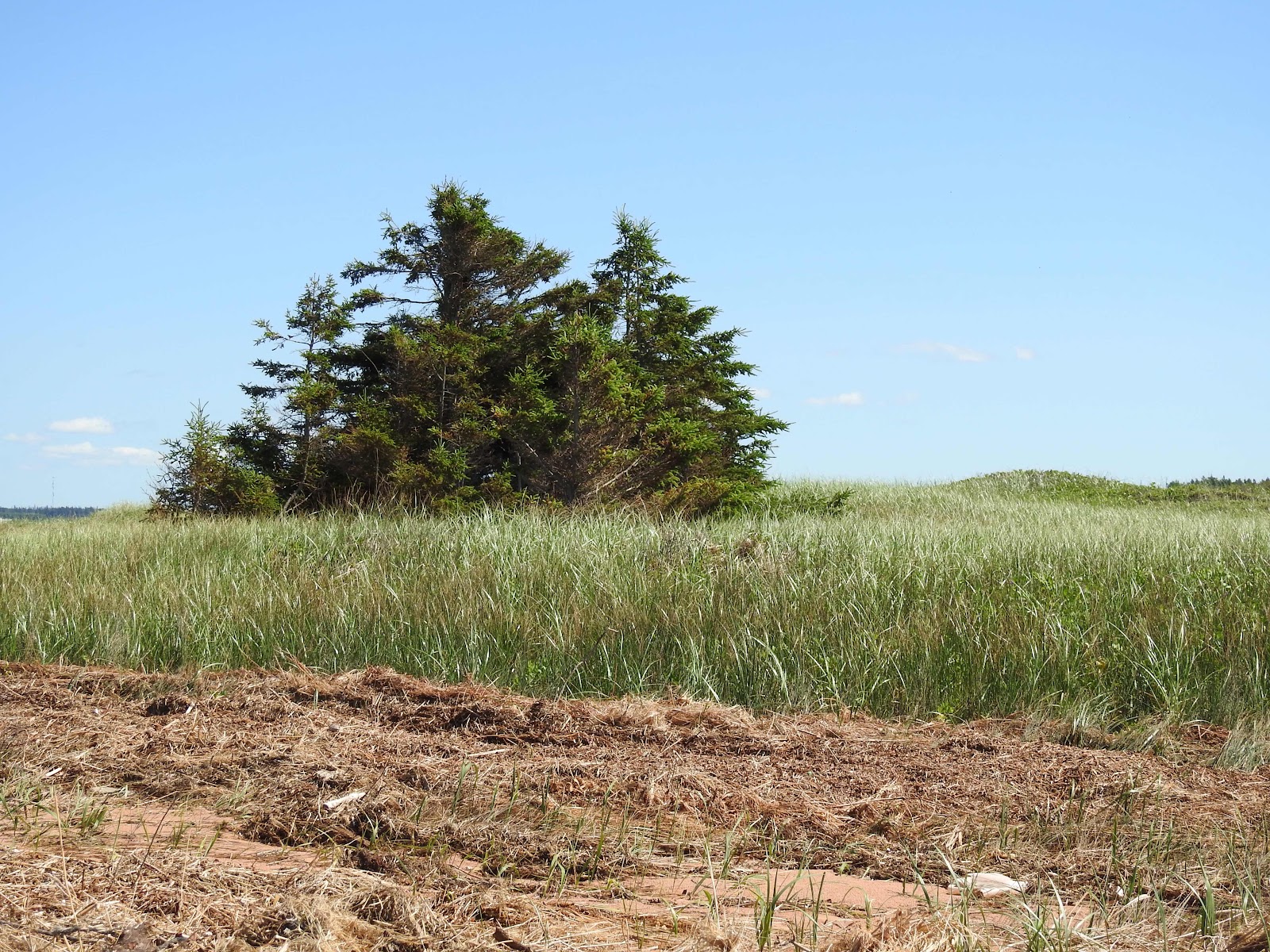 At the other end of the beach, one sees the erosion of the cliffs and the beginning of a sea stack or arch. The beach is a study in erosion of a coastline. 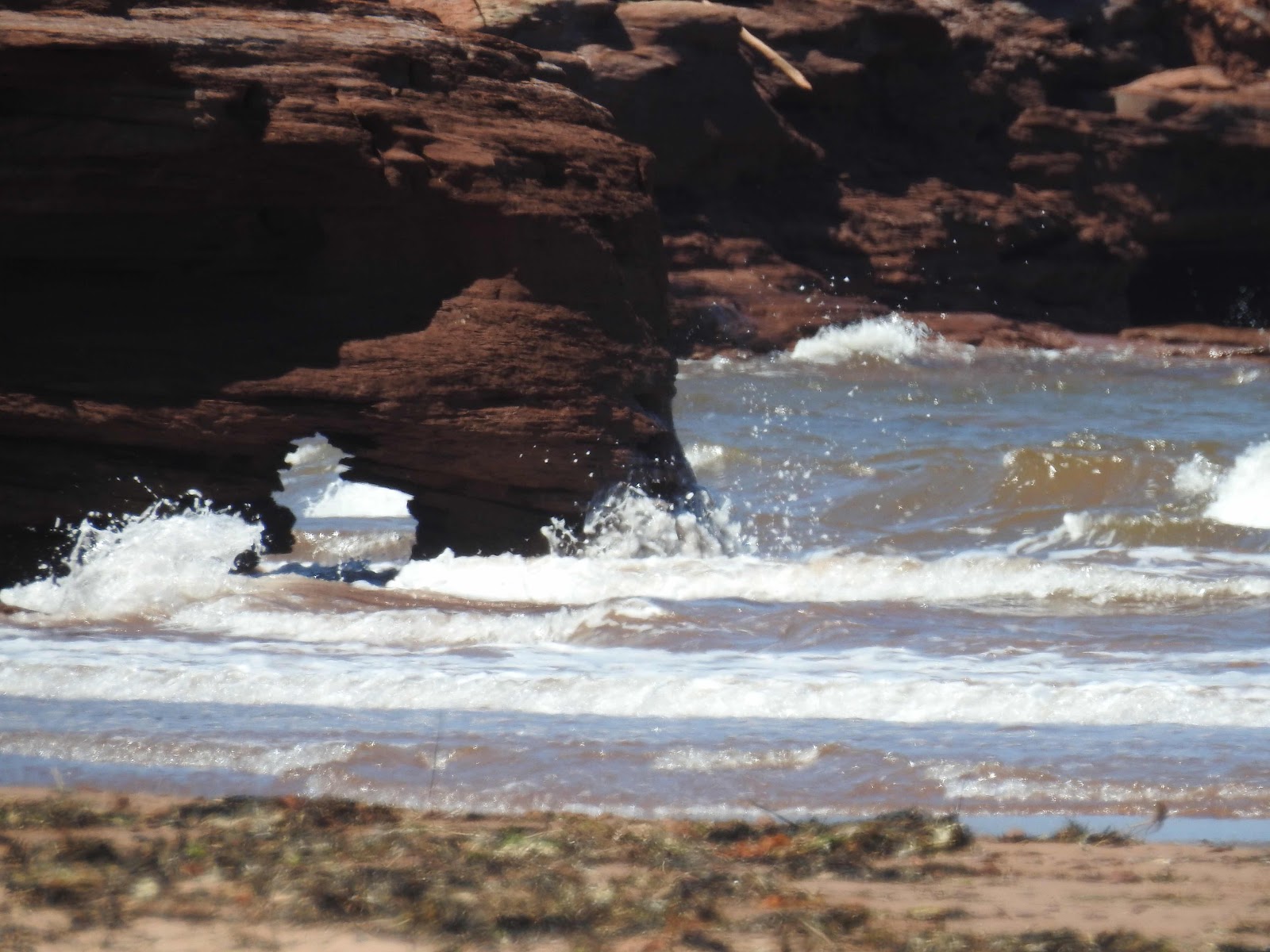 Seagulls are busy on a sand bar just off shore. Their seagull chorus is reminiscent of other beaches in other places and times. Many gulls carry seaweed around, possibly for a nest though it is late in the season. 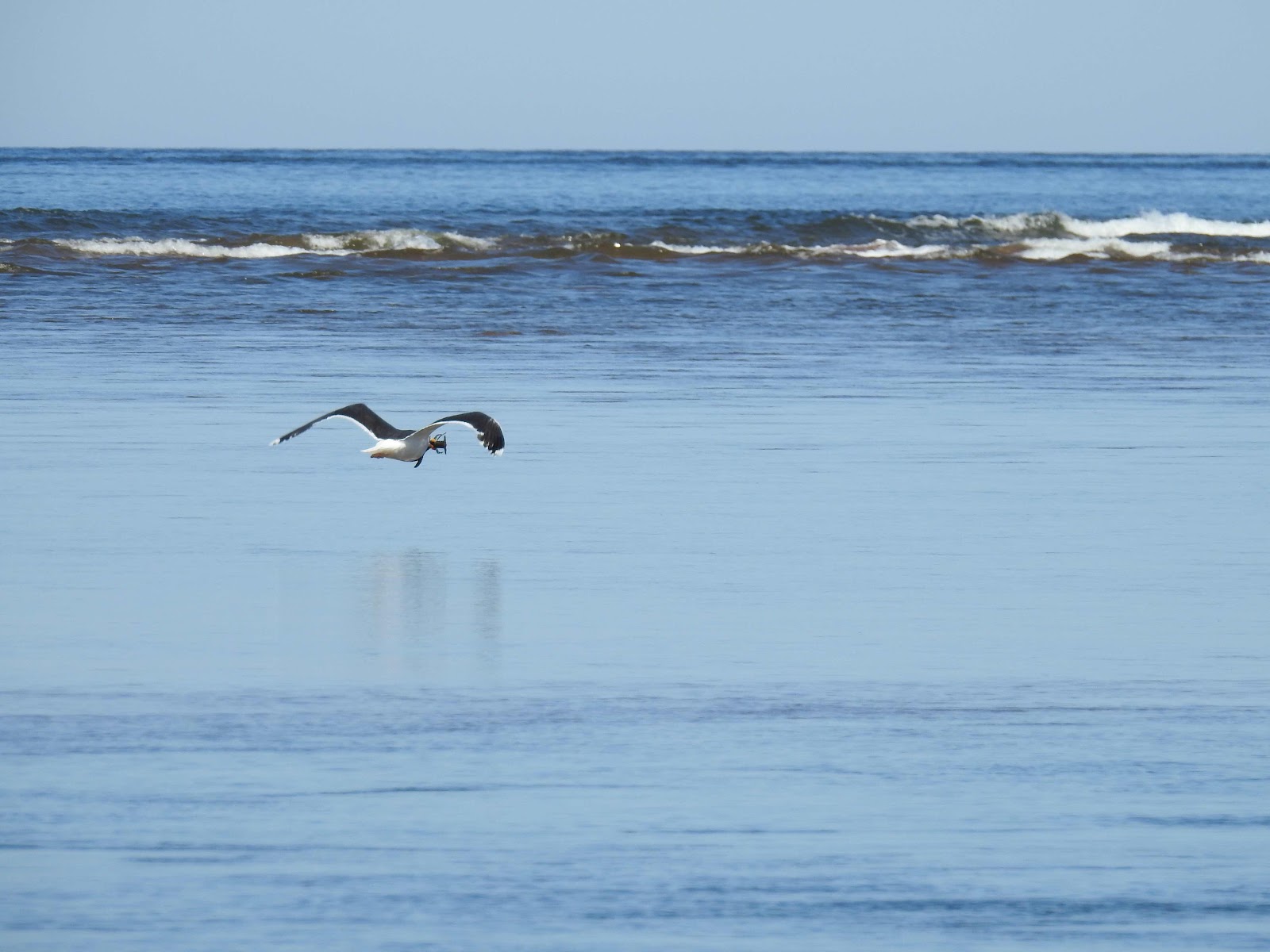 There are not many people on the beach as we take turns walking its length with the golden grand-dog. 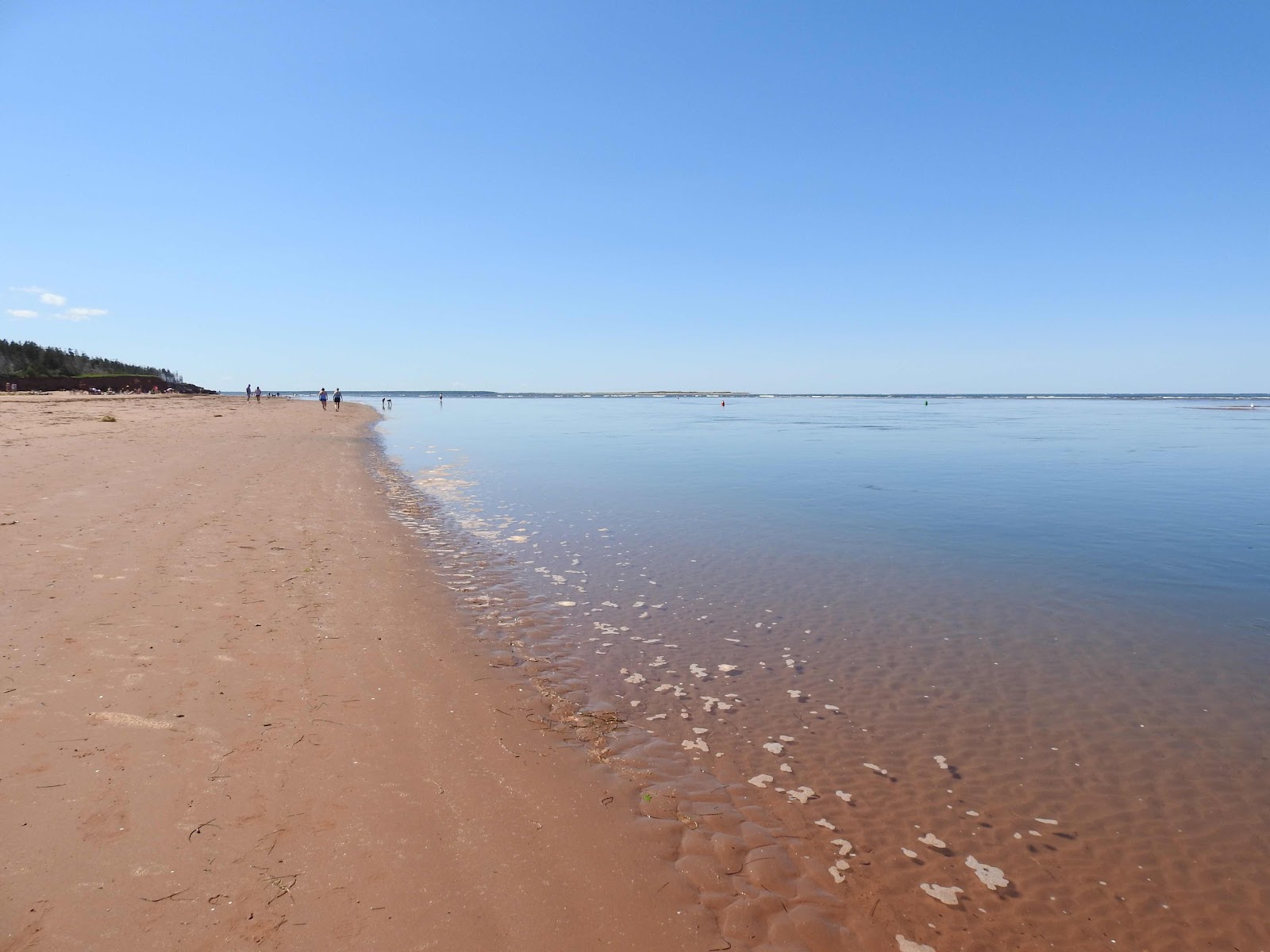 She makes friends easily and many ask to pet her which Georgie loves. I swear she smiles at everyone. 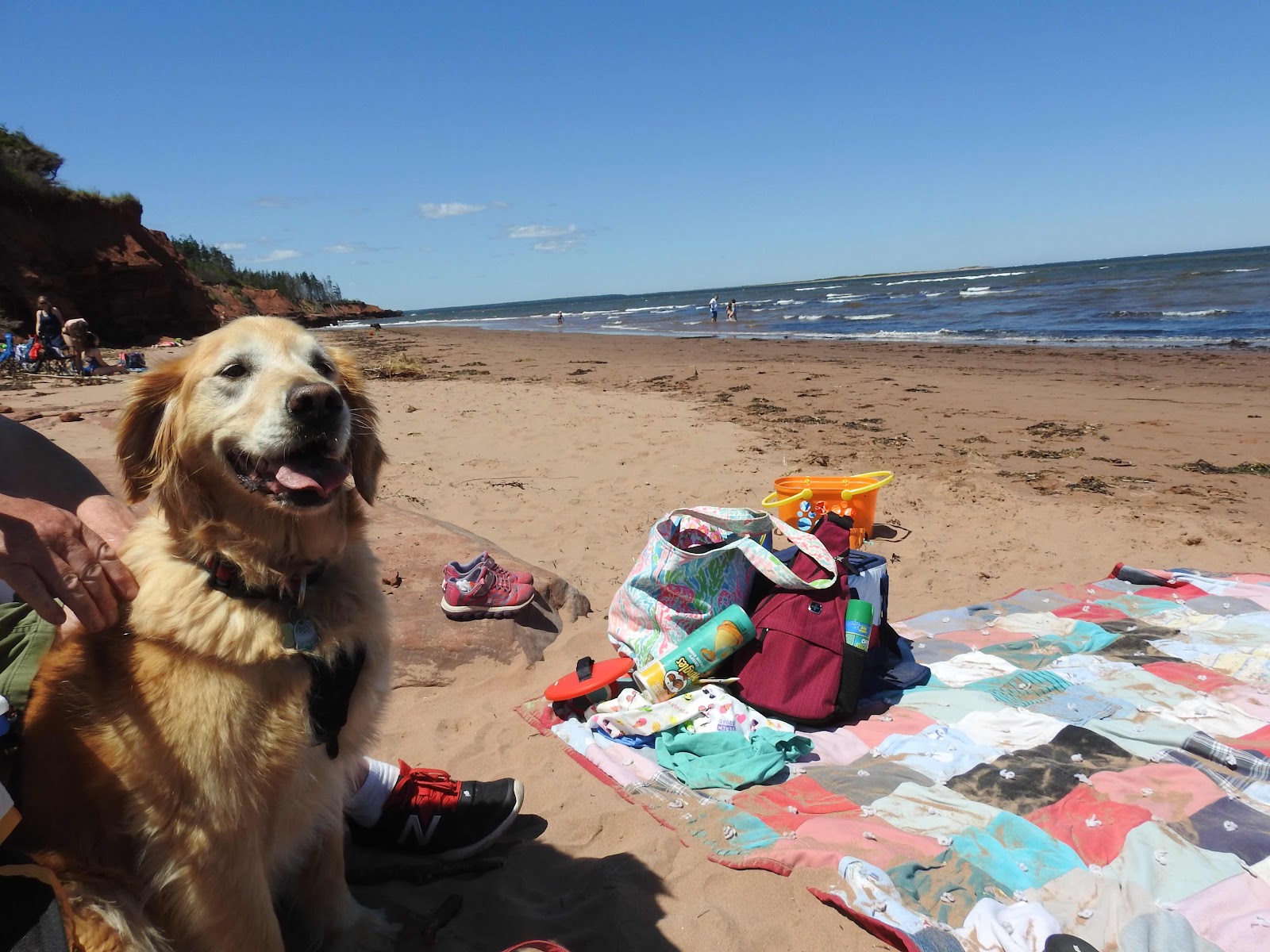 The kids play in the sand and dabble in the water as the tide recedes. It is a gorgeous day of island summer life. 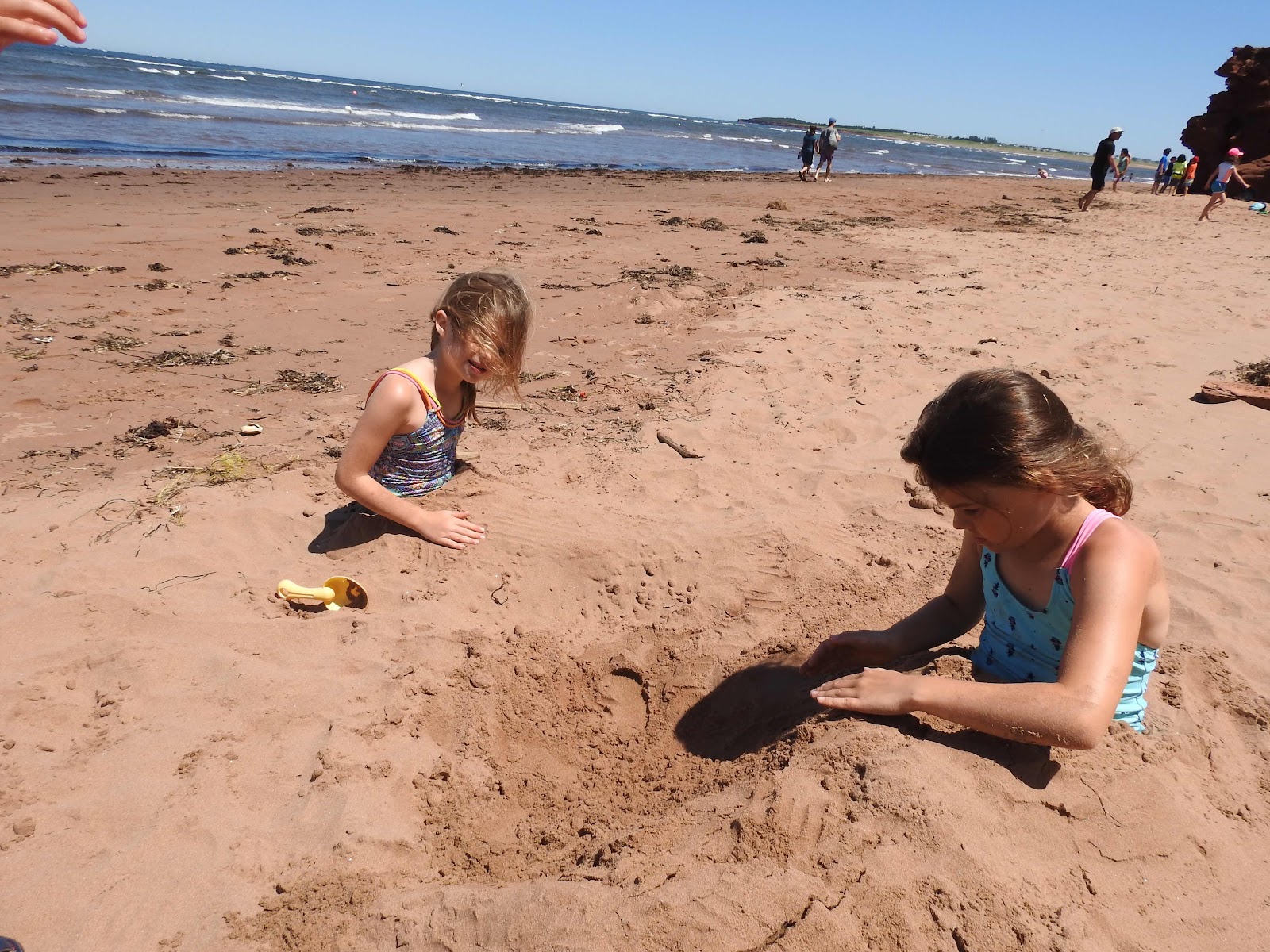 Ruth at  https://ruth-hiebert.blogspot.com/  asked if I had ever dried peonies as she had. While I have dried flowers in the past, I have never dried peonies. It would be a great project however.

It looks an absolutely blissful place and day. Thank you for taking us along.

You have taken us through the day and place very well.

I think I am in love with your island, too. Such a lovely place to live, and your pictures capture the day beautifully. Thank you, Marie. :-)

I seldom ever see the sea and you see it so often. Dried peonies interesting I do not see how I could dry the doubles but maybe the single????
Have a good week, Diane

little girls burying themselves in the sand … it takes me back over 80 years ago when my sister Peg and I would do that for hours !!!

A beautiful stretch of beach that looks ideal for dogs and children.

What a lovely walk you took us on. Georgie has the life, she's one special dog!

I enjoy seeing these scenes, scenes I won't see anywhere near to where I live.

Glad the boat capsized didn't cause problems. Lovely photo's, makes me want to pack my pack and come and enjoy.

these beaches are the perfect spot for a picnic!! the kids look like they are having a fun time!!

Such gorgeous photos of a lovely day. Such a blessing for you all to enjoy one another's company.

I would love to live near the beach, the dog is so incredibly cute:)


watching lobster fishers must be exciting ,here we only see fishers though in Karachi may be there is such hunting

your pet is such a darling :) i can see her friendly smile :)

Lovely images!
Is Setting Day the same every year? Or changes from year to year depending on conditions?

That will be interesting to see if and when the sea claims those trees. Haha. I loved the kids covered with sand. Remember doing that as a child. Some games never go out of style.

Hi Marie, This is a really neat post. You know what surprises me ... the beach is so clean! Our Pacific beaches are littered with bits of plastic and other garbage that floats in. The more I see of PEI the more I like it! :-) John

What a lovely day that was. Thank you for taking us along and capturing our hearts.