A week after our first sighting of Mallard ducklings at Cavendish Grove, we went back to see them. This time, we found two Mallard mothers with ducklings. One had five ducklings in the lower pond 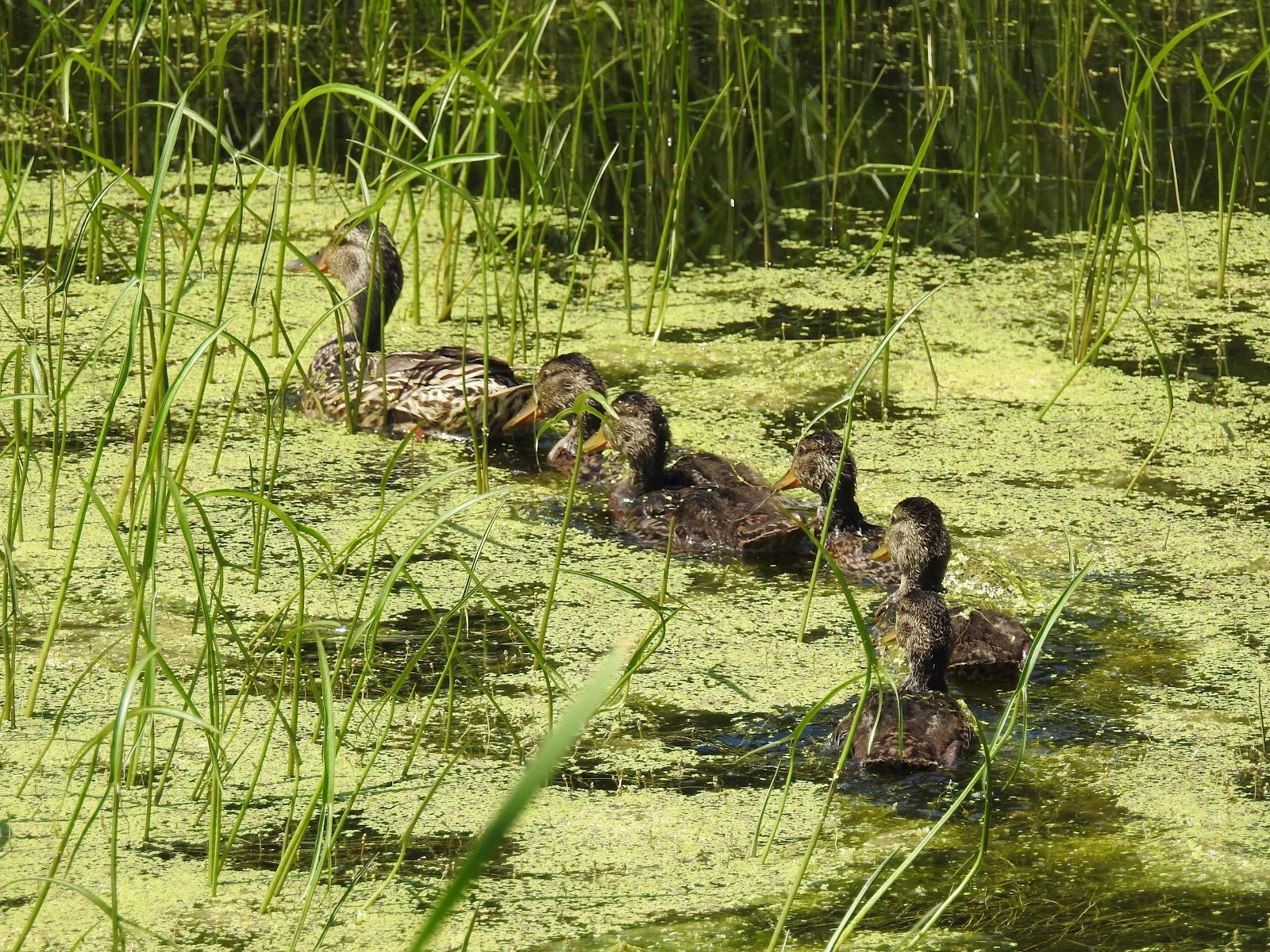 and the other, ten ducklings in the upper pond.

I believe these latter ducks to be the ones my husband and I had seen the week before.

We had walked between the ponds in search of the ducklings, hoping the five we spotted in the lower pond weren’t all that was left of the ten we’d seen previously. However, the ten and their mother had made the short trek to the upper pond as we had and were enjoying their time there.

The ducklings were playful, 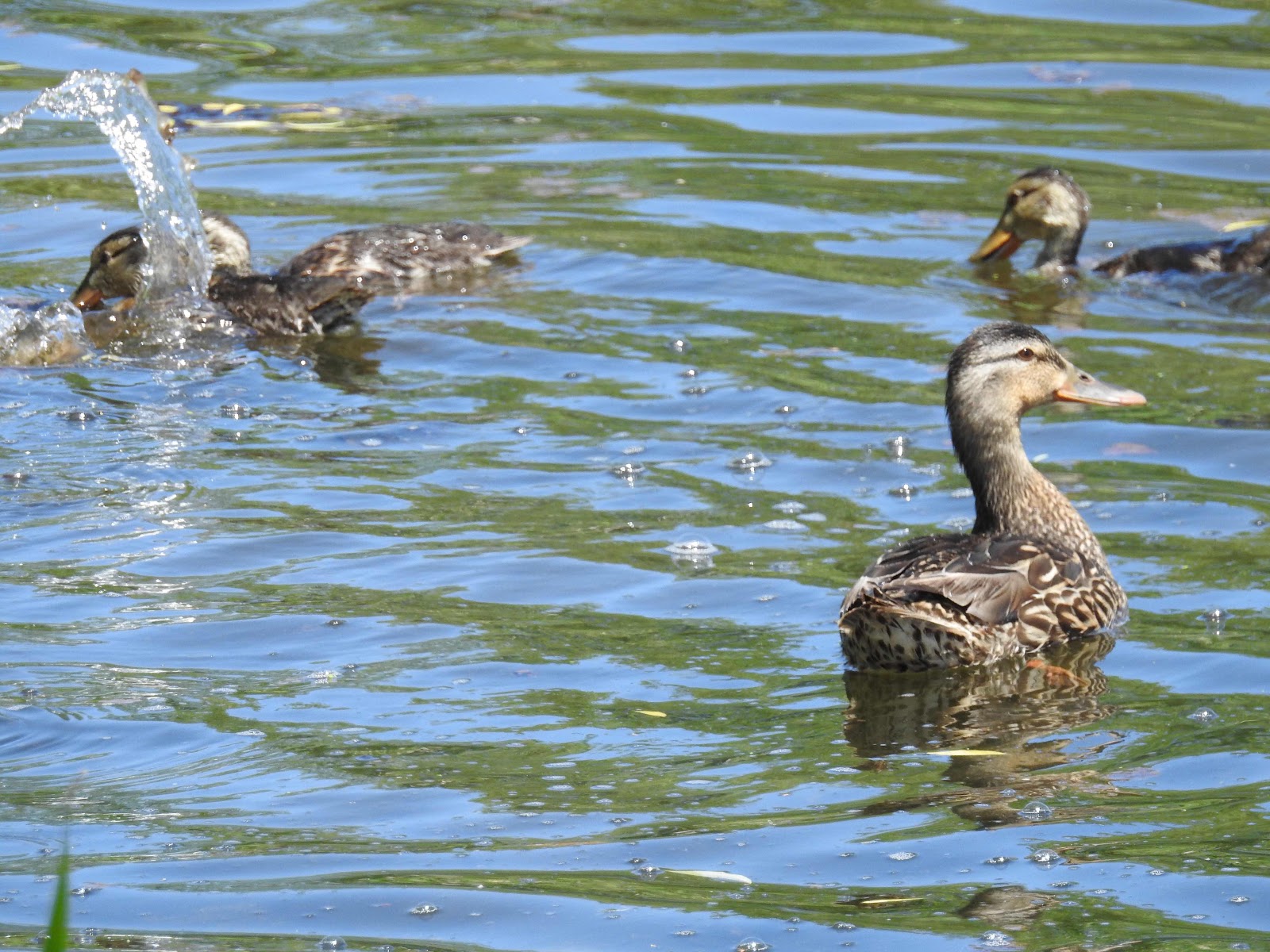 rambunctious even, as they dived into the water one after the other, sending the water high into the air. Their mother dabbled quietly, dipping and surfacing. She held her head high as she swam around the ducklings. It looked like the young were in competition for the highest splash, the way all youngsters compete. 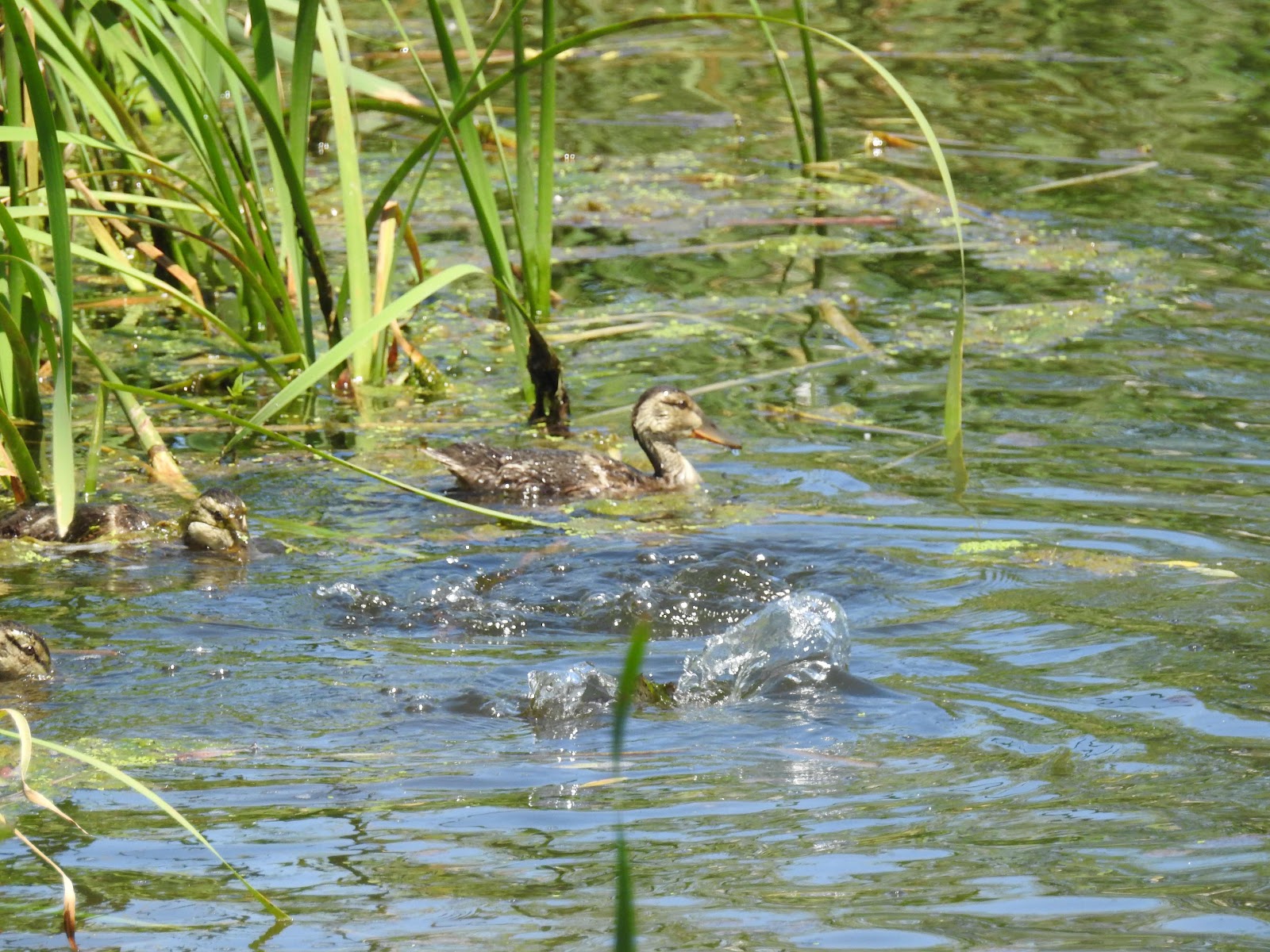 In the previous post about the ducklings, I mentioned the molting male Mallard I had seen. A few days later, I saw a pair of molting mallards on the stream in Summerside. 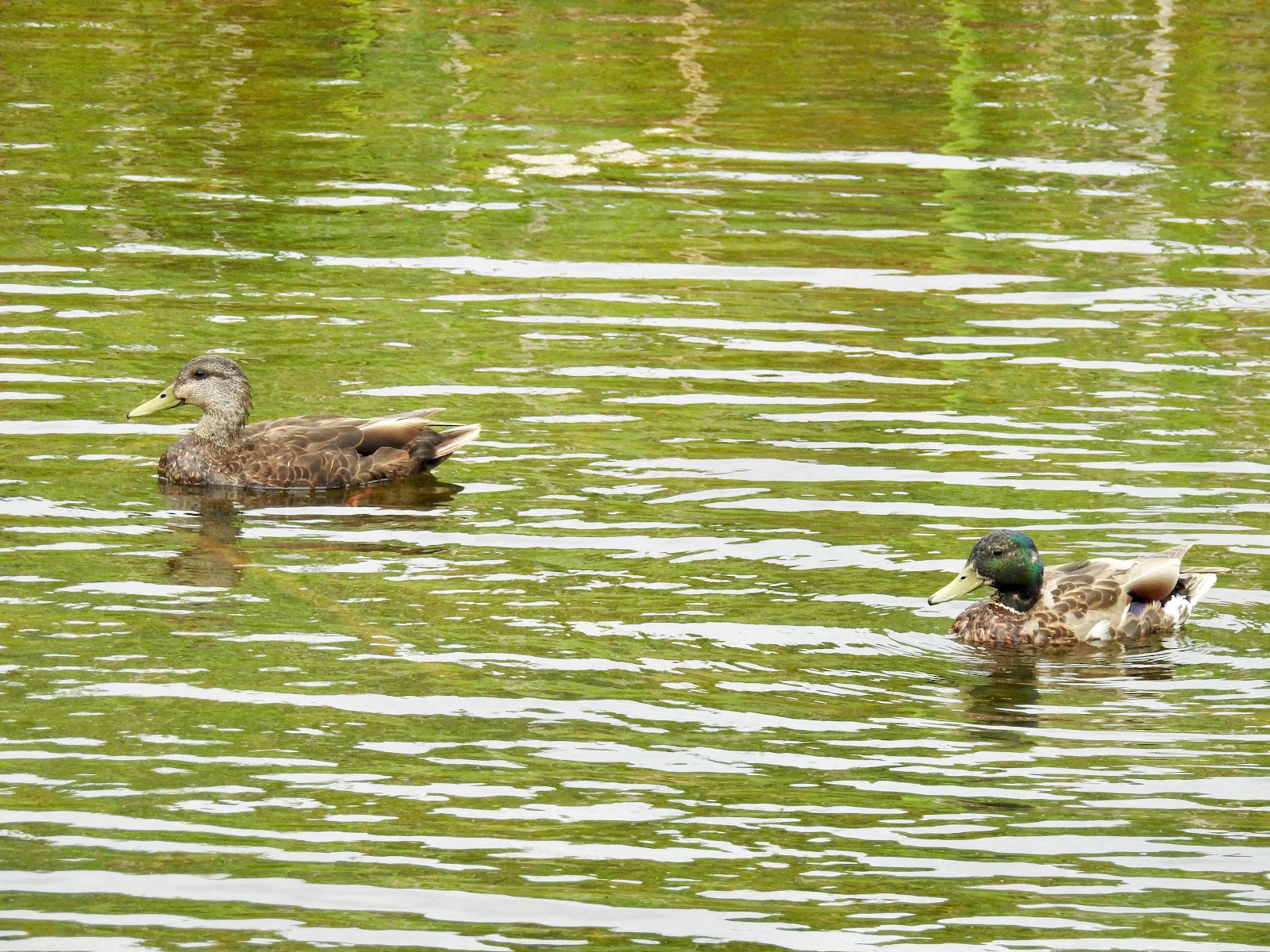 The male, usually such a pretty bird, was quite bedraggled. I guess anyone can have a bad hair, I mean feather, day. 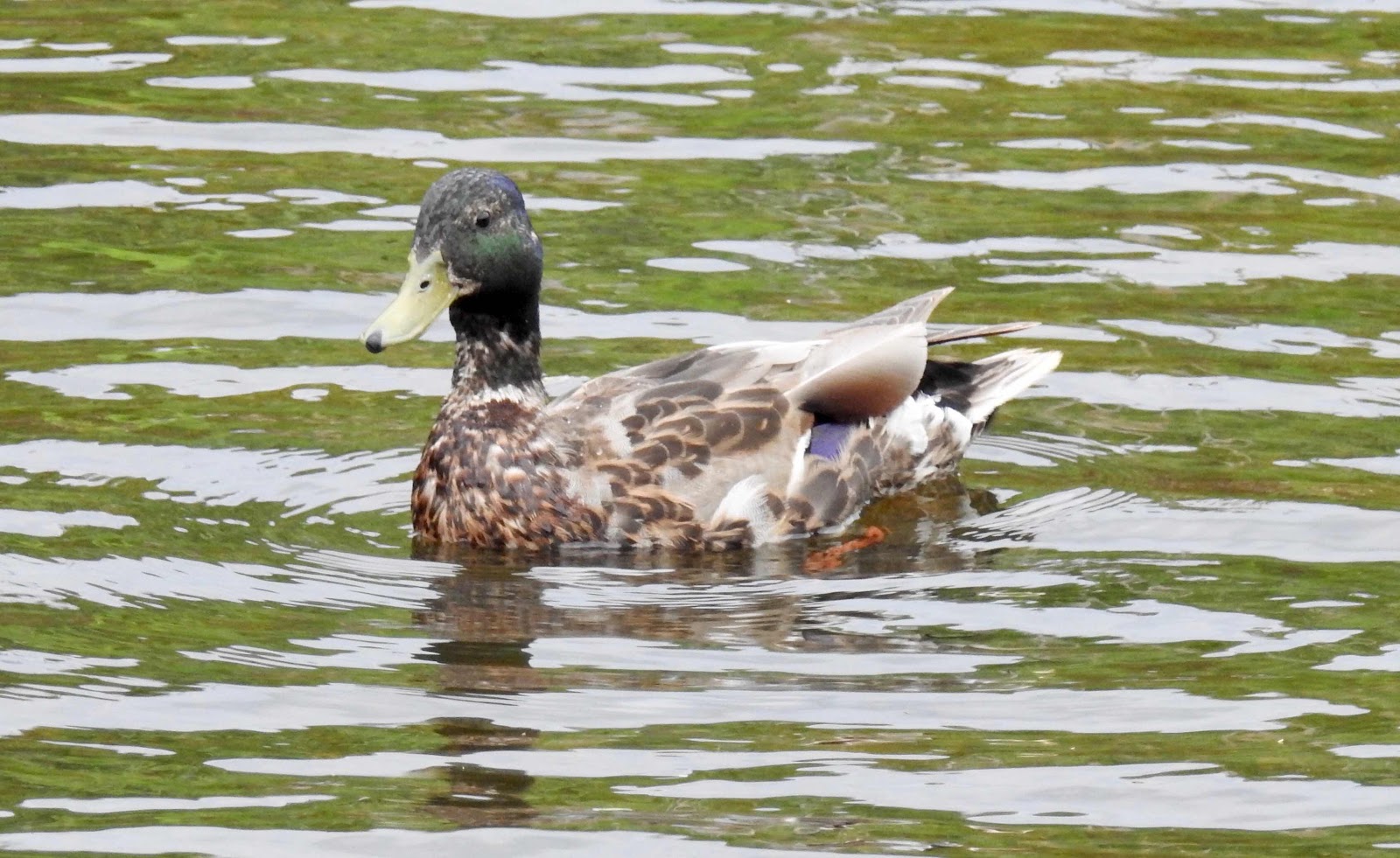 It is fun watching the ducklings grow. Wonderful photos of the Mallard family.
Enjoy your day! Have a happy weekend.

I also enjoy watching youngsters play. And yes, that mallard does look rather bedraggled, but I guess it's all normal. I didn't know before you taught me that they molt after they breed. :-)

He does look somewhat bedraggled.

Hi Marie, As usual I enjoyed all your photos. Neat to see you captured in the little ducklings in action! And you are so right about that last mallard! A bad feather day for sure. :-) Hope you have a fine weekend on PEI. John

i'm so glad you found them, it's always fun to watch their progress. beautiful captures!!!

and yes, those pretty males are not quite as showy this time of year!!

The male ducks molting was news to me too. Baby ducks are pretty funny to watch.

They are so darn cute! I like ducks! Well, I think I like birds in general! You got to observe them right close and got good photos.

They are incredibly cute☺

Kids will be kids!! lol

Love this series. And would be happy to look as good on my own 'bad feather' days.

I love the duck pictures. If I had my druthers I would own a duck farm. Just raise those bad boys and let them fly off. If they made it back the next year so much the better.

Great set of photos. The parents look like they are doing a fab job of raising their young. Have a good weekend Diane

Lovely to see these photographs of the Mallard family.

The male certainly has a "Don't be looking at me!" attitude.

How they have grown!!

He was having a bad feather day... or so it seems! hahahaha

Cute pictures of the ducklings splashing away. Yes, those moulting male Mallards look rather scruffy.

HA! Oh, yes. it happens to the best of us. So glad all the ducklings are accounted for!

Splashing around in thhe upper pond looks liked fun. It would be most welcome here as we are in the midst of a heat wave.

Good Morning! Oh, these are the sweetest photos. What fun it must have been to re-visit the pond.

I bet it was fun to watch them...imagine having that many children all at one time!