Two years ago, the Westmoreland River Nature Park was established on the central south shore of Prince Edward Island. We visited that year and a few times each year in the last two. We’ve seen a great deal of change in the area of Stordy’s Pond in that time. 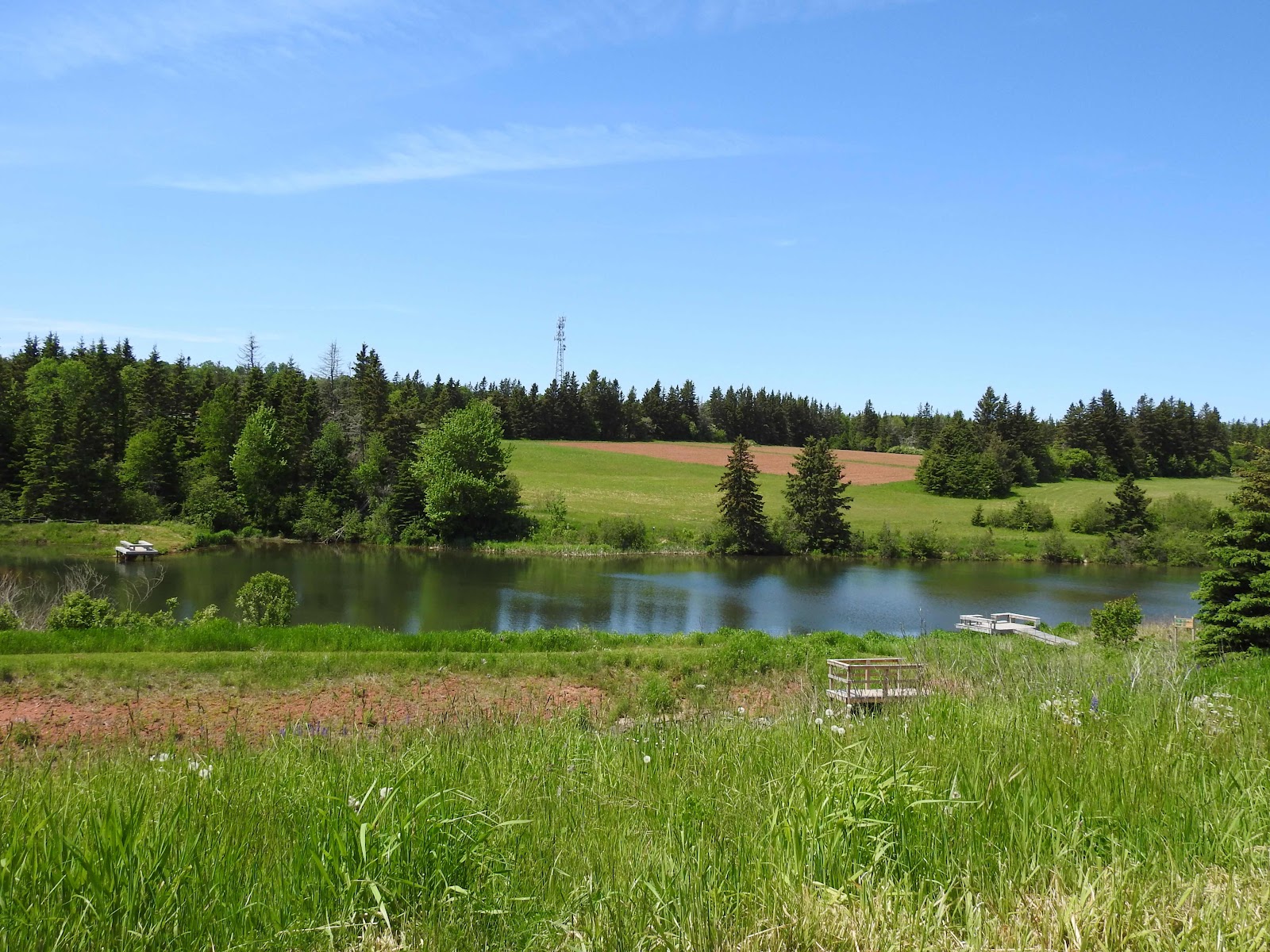 The pond and river are lined with more grasses and shrubs which provide a better habitat for the fish. 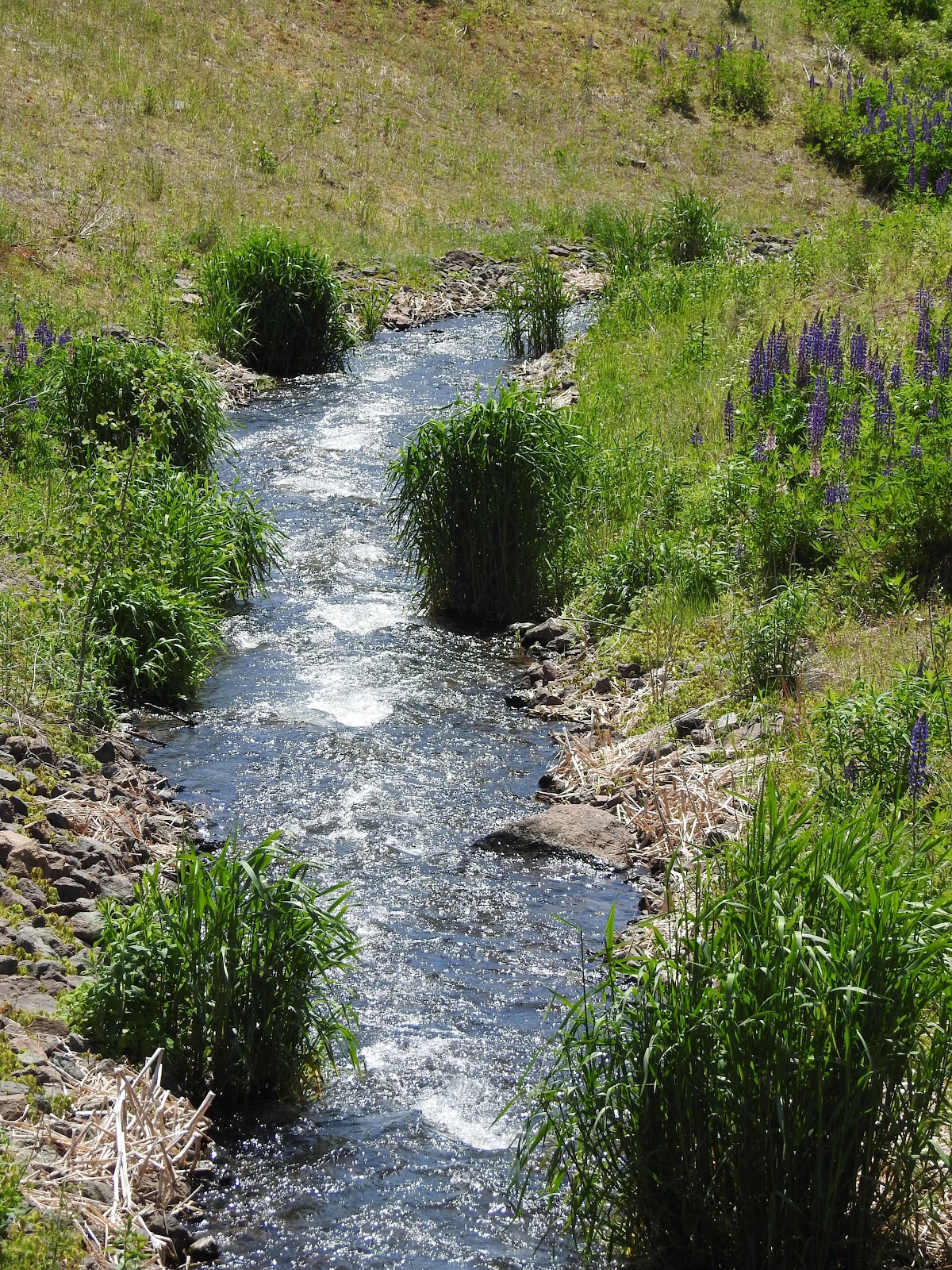 The pond itself has areas where fish can hid out and rest, away from the watchful eyes of predators such as cormorants. The hope is Atlantic salmon will return.

A few years ago, two stands for anglers kept them off the banks where grasses and other plants were not yet established.

Today, there are several new areas for viewing the waterways which flow from the pond. 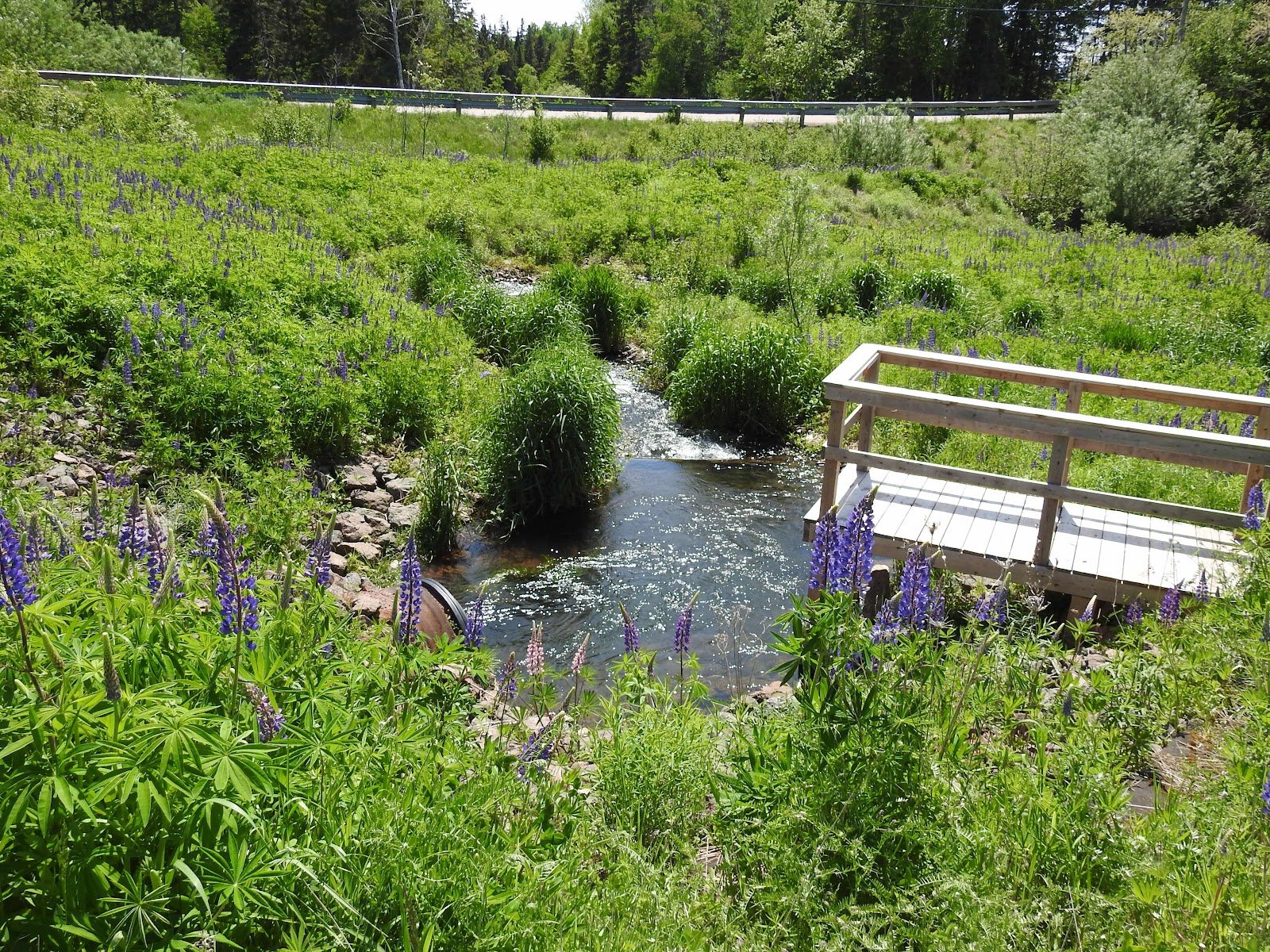 The view and sound of the water from these locations is soothing. One waterway flows down over rocks, creating the sound of a waterfall. 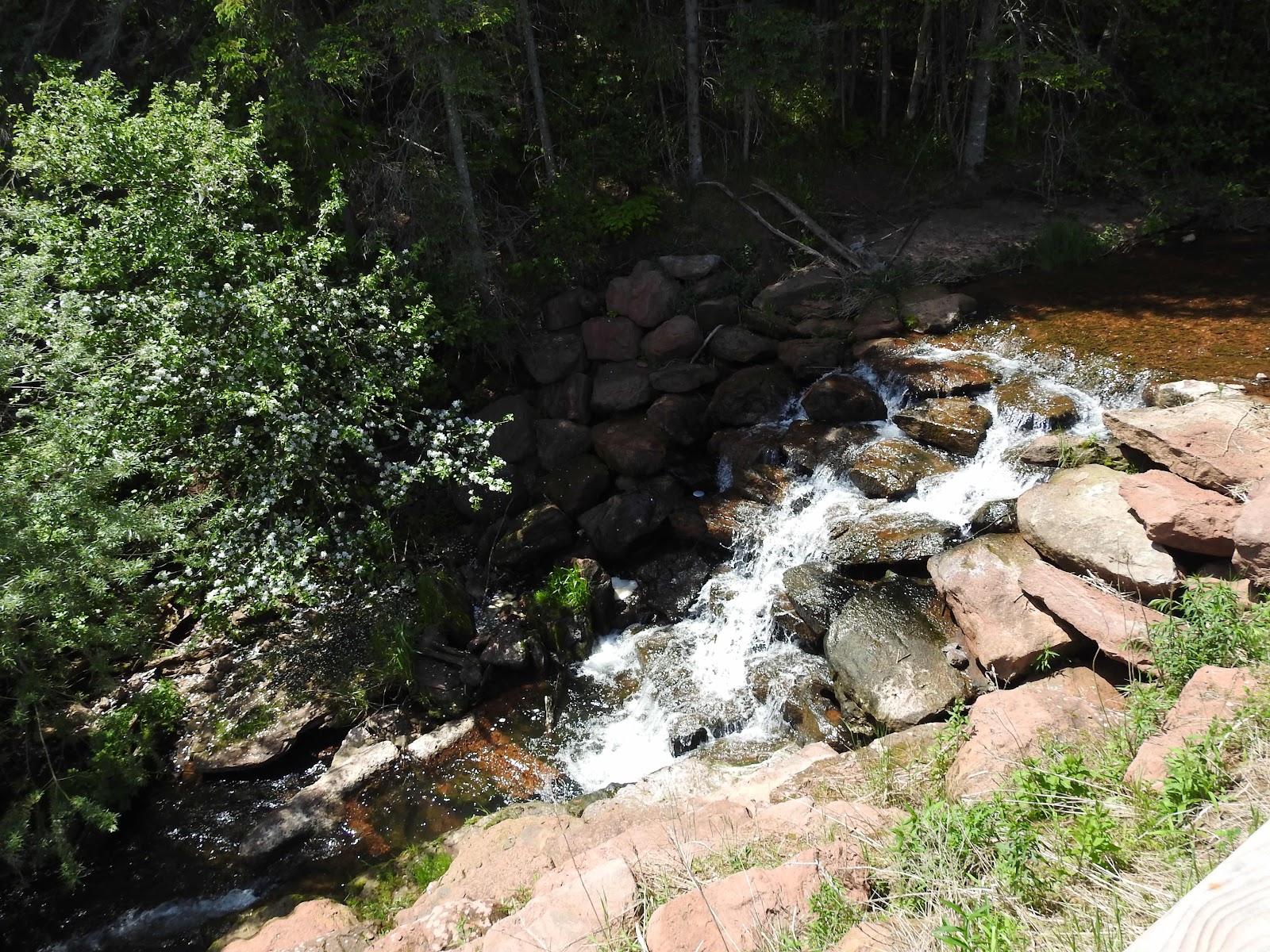 The first lupins my husband and I have seen this year were at this nature park. They line the sides of the waterway near swallow boxes and in the area where the water wends its way through the park. 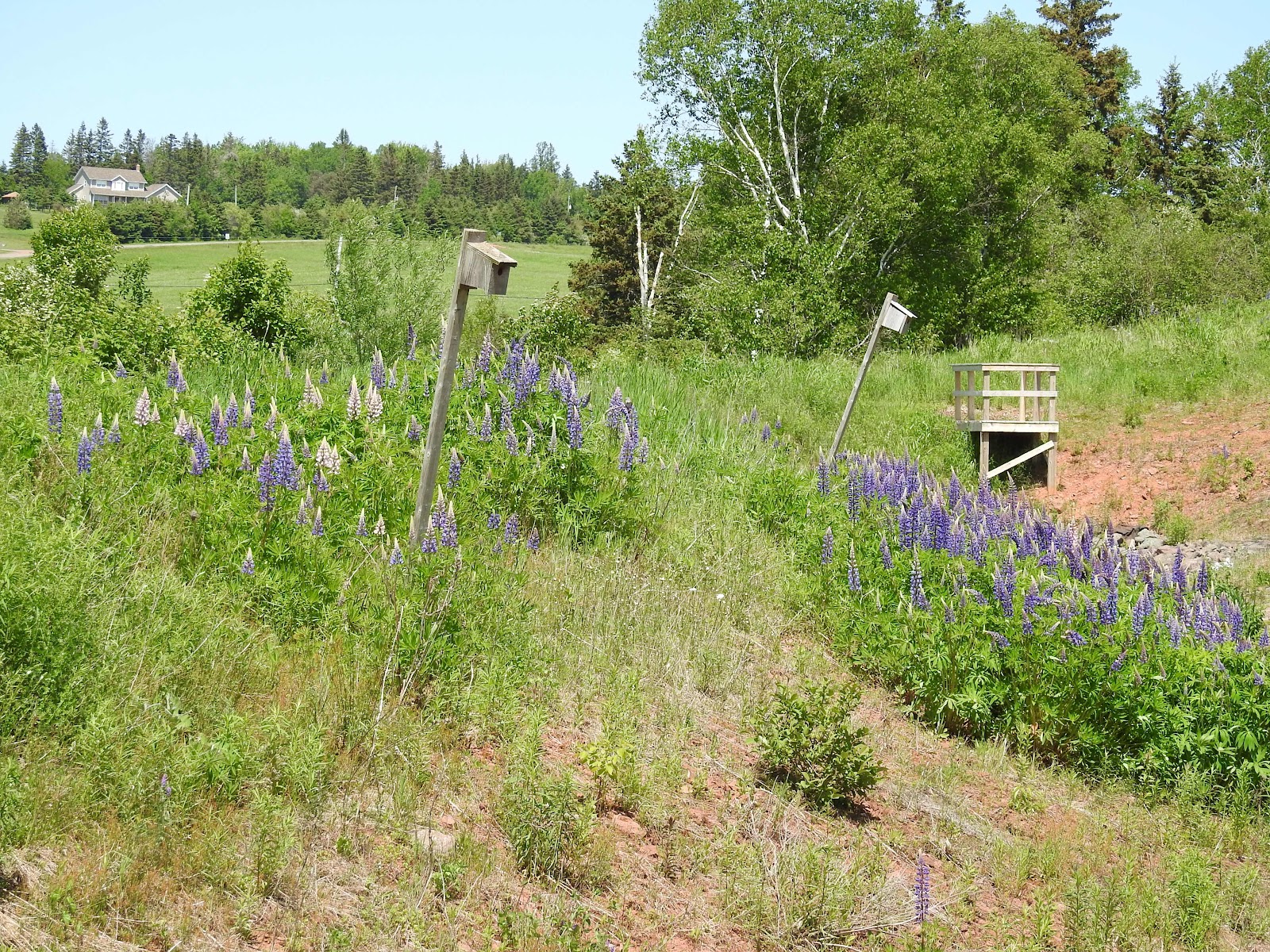 Lots of purple and violet with occasional pink or white lupins catch the eye.

Stordy’s Pond is reflective as we look out over the countryside beyond the water. 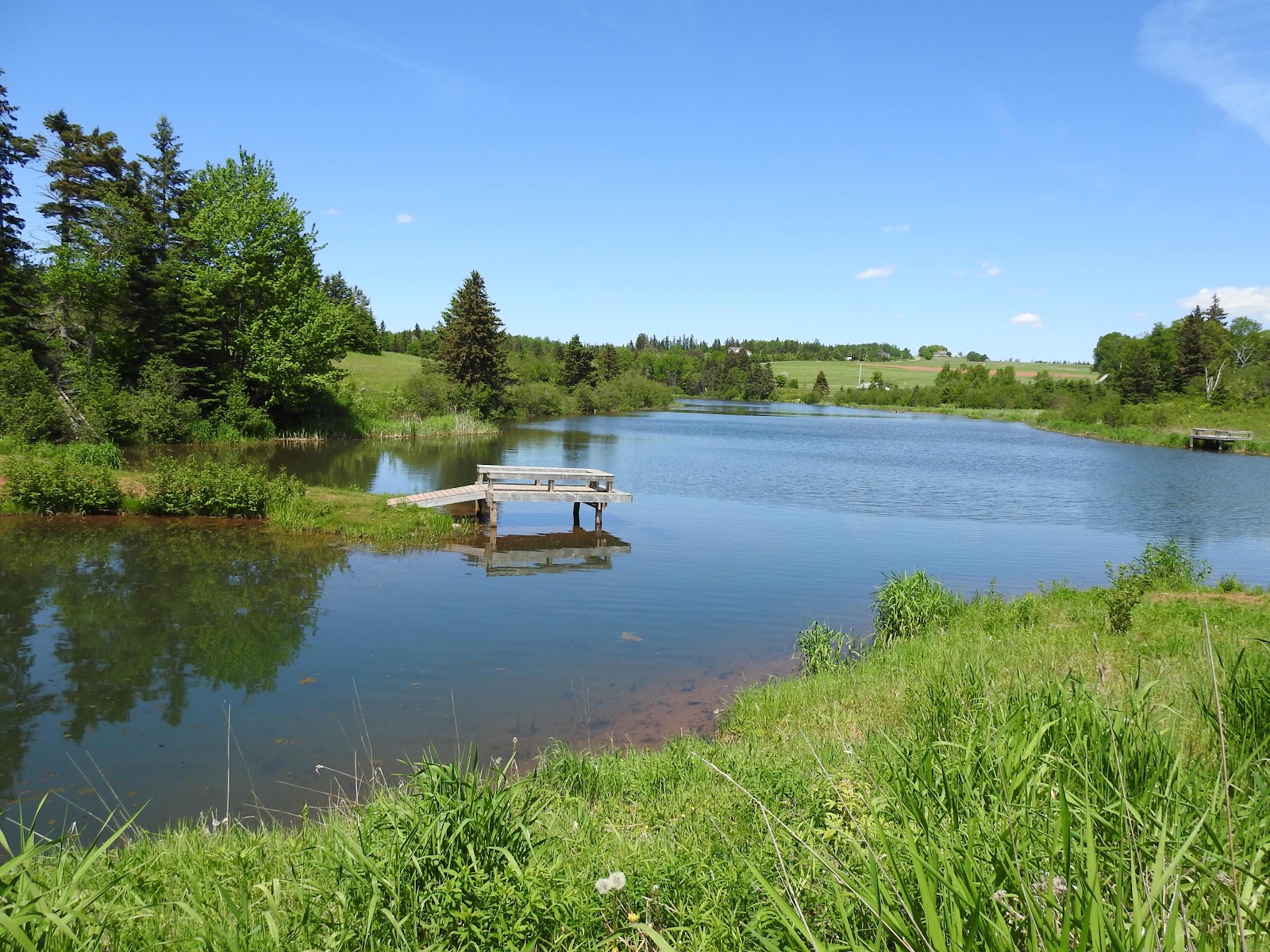 The setting is peaceful with the occasional car passing on the road nearby.

This pond has large fish now according to an angler we met there last year. Catch and release is the common practice here, with the fun of the catch the main interest.

A monarch butterfly feeding station is included in the park as well. 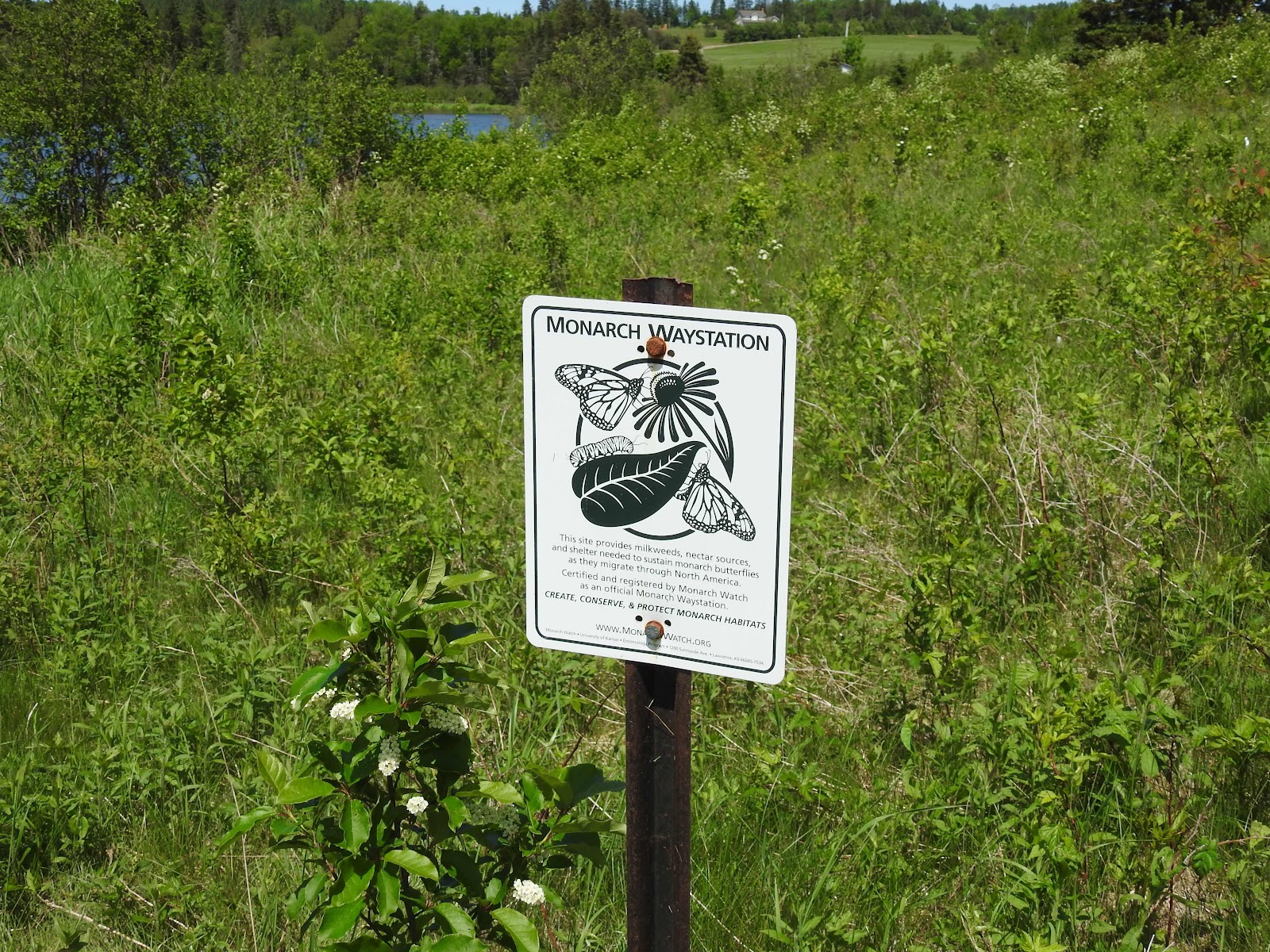 While there were numerous butterflies around the park, we did not see any monarchs.

This park, the work of two local conservation groups, has been a huge success. A picnic here is on the horizon.

It's a lovely place. Those lupines are beautiful! I always enjoy learning more about PEI, Marie. :-)

What an absolutely marvelous place to walk. I do hope the salmon will return.
I like that there is a place for the butterflies too.

Such a lovely place. I love the water tumbling over the rocks and those colorful lupines. So thankful that this project has been so successful. Enjoy the rest of the week.

Your photos display such a lovely area. Makes me wish I was there. I wonder how good the fishing is?

Stordy's Pond.. what a super name! It looks beautiful Marie, the Park Rangers are doing a brilliant job here.. definitely a future picnic spot I should think ✨

it is nice to see a place that is so nature responsible. and it is also nice to see the butterfly waystation!!

beautiful images of the pond and surrounding area!!

What a lovely area!

Beautiful photos! Especially the header photo. And the lupines...so pretty! Happy Canada day to you (a bit late!) Andrea

Such a pretty place to walk and explore. Thanks for taking us along.

What a beautiful, beautiful place. All praise to those who set it up and maintain it. Lupines are a much coddled garden plant here - to see them growing wild would make my heart sing.
Thank you so much.

This looks like a wonderful place to relax and enjoy the beauty of nature. Love that pond and the flowers, oh I love all the pictures.

A charming little stream and pond.

How nice local conservation groups are engaged in the establishment of the park. Vested interest.

This seems well thought out. I like those platforms for fishing.

The place is so beautiful!:)

Beautiful pond and area. I wish we had more conservation groups protecting our natural areas. As our President gives more and more access to our national parks by big business, I fear the only beauty we will have left is those we create ourselves like this beautiful area.

Did someone mention Atlantic salmon??? What a fabulous place and foresight of your local conservation groups. I love that you show us what's happening around you, Marie. It feels like an open invitation to experience it for ourselves.

Is this in Canada? I am from Chicago but in Vancouver for a week. Looks beautiful.

Wow a lot has happened in two years. Have a good day and take care, Diane

Looks a great place for a wander and a picnic. Some of our country parks have also gone the route of having special platforms for anglers rather than have them trampling up and down the river banks.

Hi Marie, Westmoreland River Nature Park looks like an excellent spot to visit. Beautiful countryside. I noted, "The hope is Atlantic salmon will return." I just in the last few days heard a report that the Pacific salmon numbers returning to Seattle are way down. Possibly will be lowest in decades. Experts are saying it may be due to climate change. I also noted the "Monarch Waystation" sign. I've read about the Monarch migration and find it fascinating. Could it be true that a Monarch might fly from PEI all the way to Mexico for the winter? The sign in your Park is the first I've seen like it ... very neat! Thanks for taking us along to Westmoreland River Nature Park. John

Hi again Marie, Thanks so much for answering my questions. Regarding the family history ... May I encourage you to continue working on that ... you are an excellent writer. Wishing you and yours a fine weekend ahead. John

How nice to read about and see photos of this conservation effort. Kudos to the group involved.