After a picnic with our family at Cavendish Grove, I went in search of the geese and goslings my husband and I had been following since May. Instead of geese, I found ten ducklings and their mother. I have seen numerous ducks before but never ducklings. They were an exciting find. 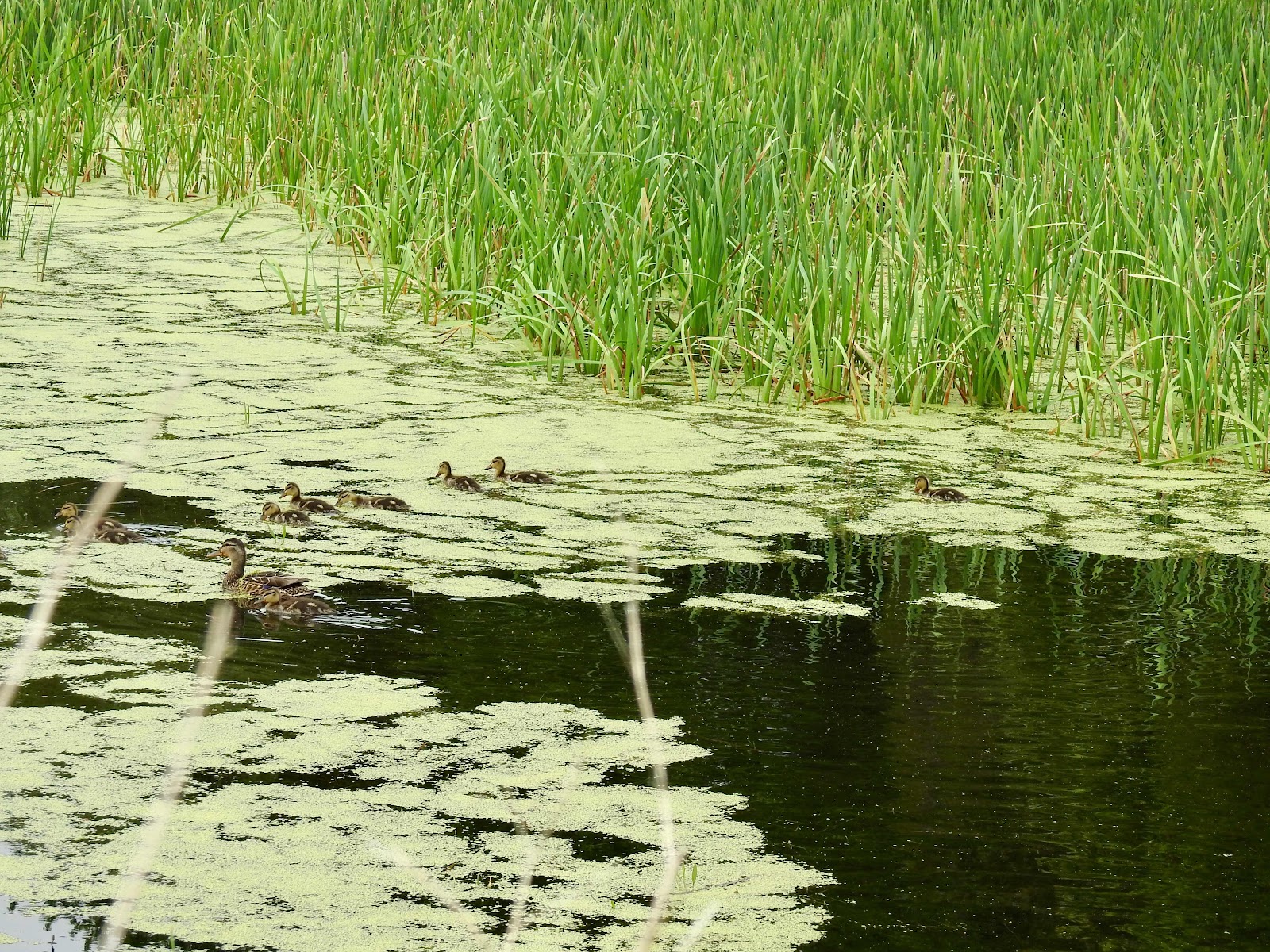 The ducks were in the pond which has an island with a nest area used by Canada geese every spring. The mother and her trail of ducklings came from among the bulrushes. The pond is full of greenery now compared to its spring look as the bulrushes have grown in for another year. Now too, much of the water is covered in what appears to be duckweed. 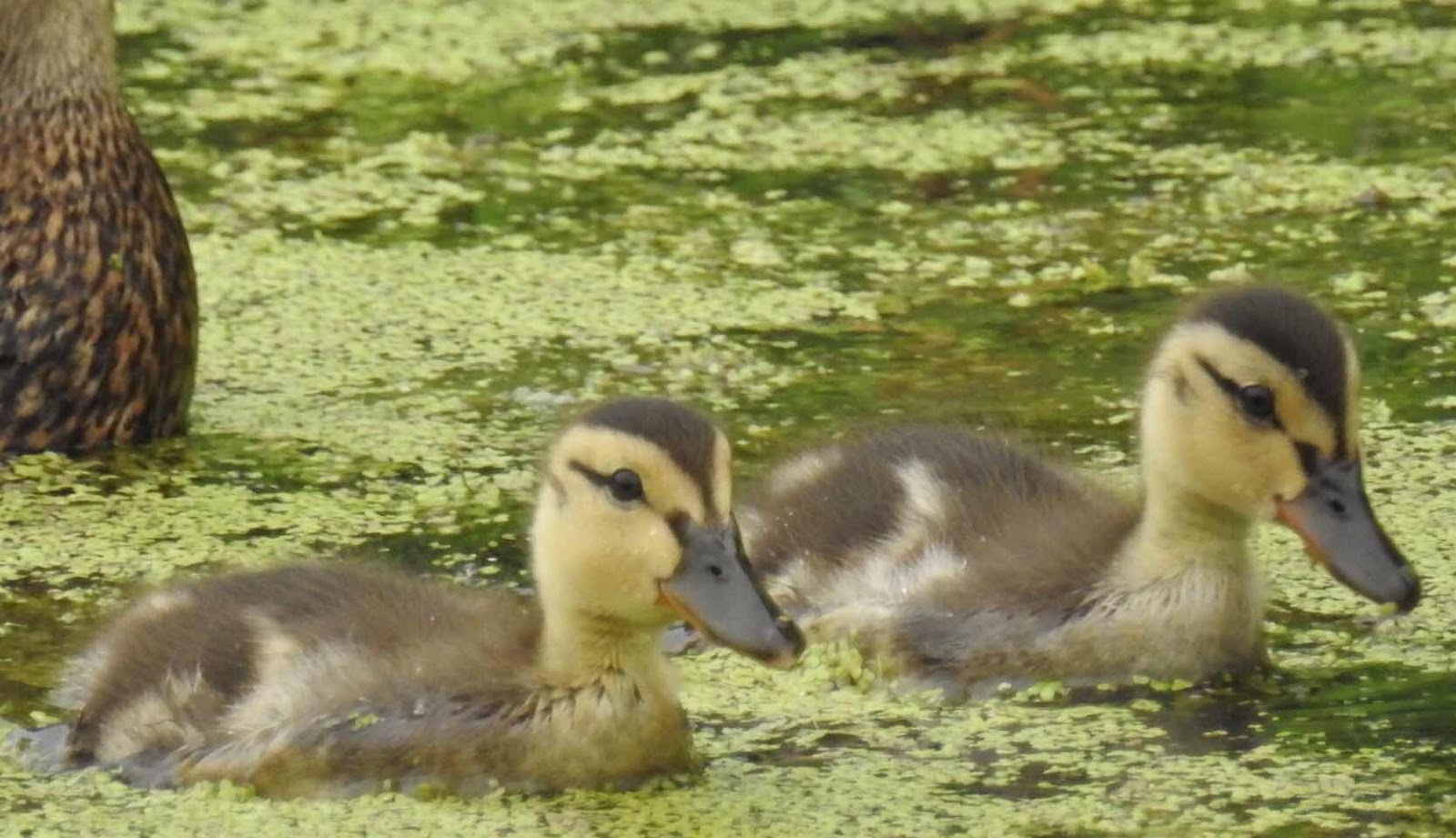 The ducklings are balls of fluff with lemon-yellow and brown heads, white and brown backs. I watched their mother for several minutes before I could identify her as a Mallard by the blue band, trimmed with white on her flight feathers. Like many female ducks, she is mainly brown and white. 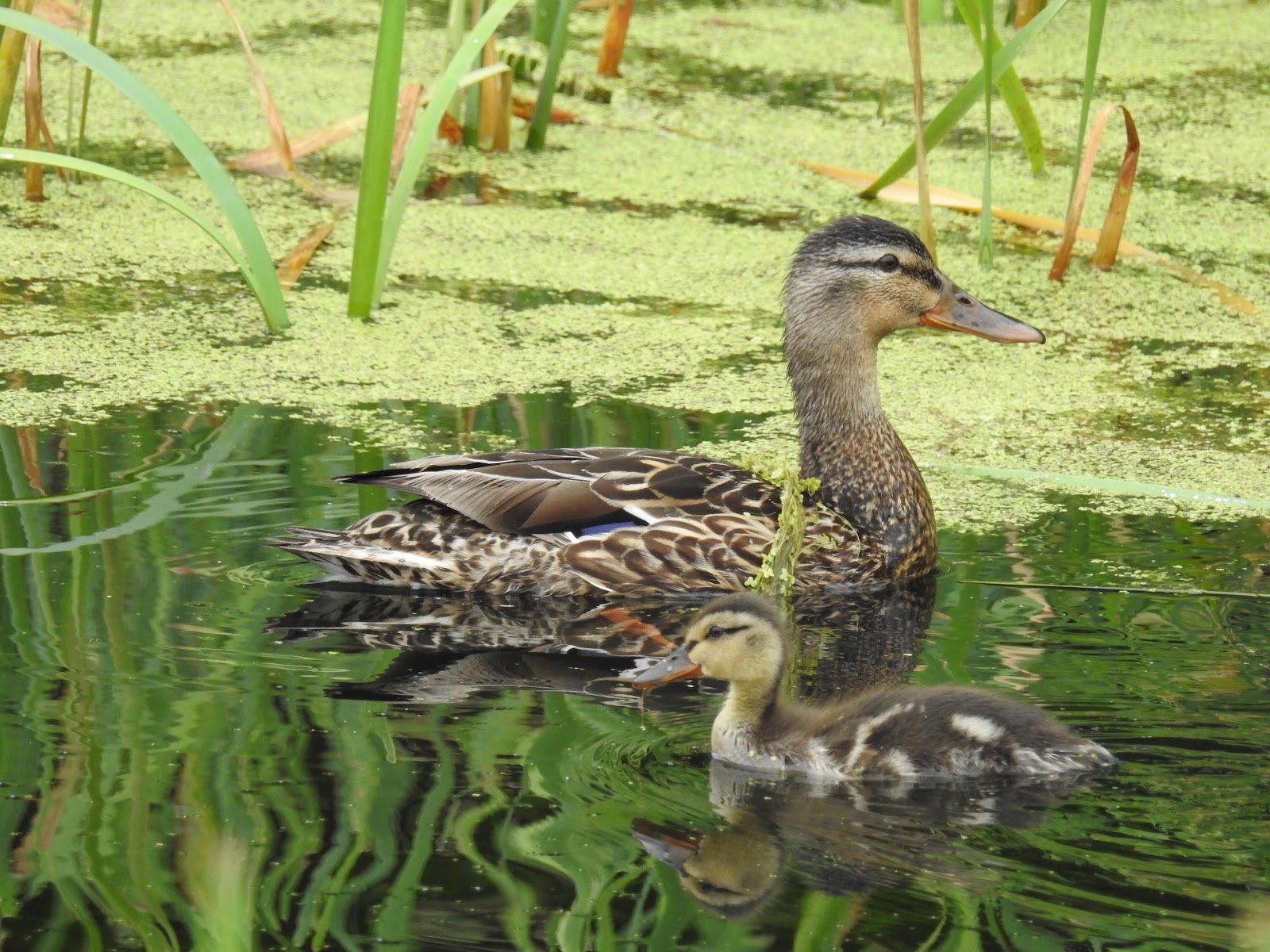 Unlike male geese, male Mallards don’t help out with the young. There was a male in the pond however. He ignored the female and the ducklings and was rather elusive darting through the bulrushes. 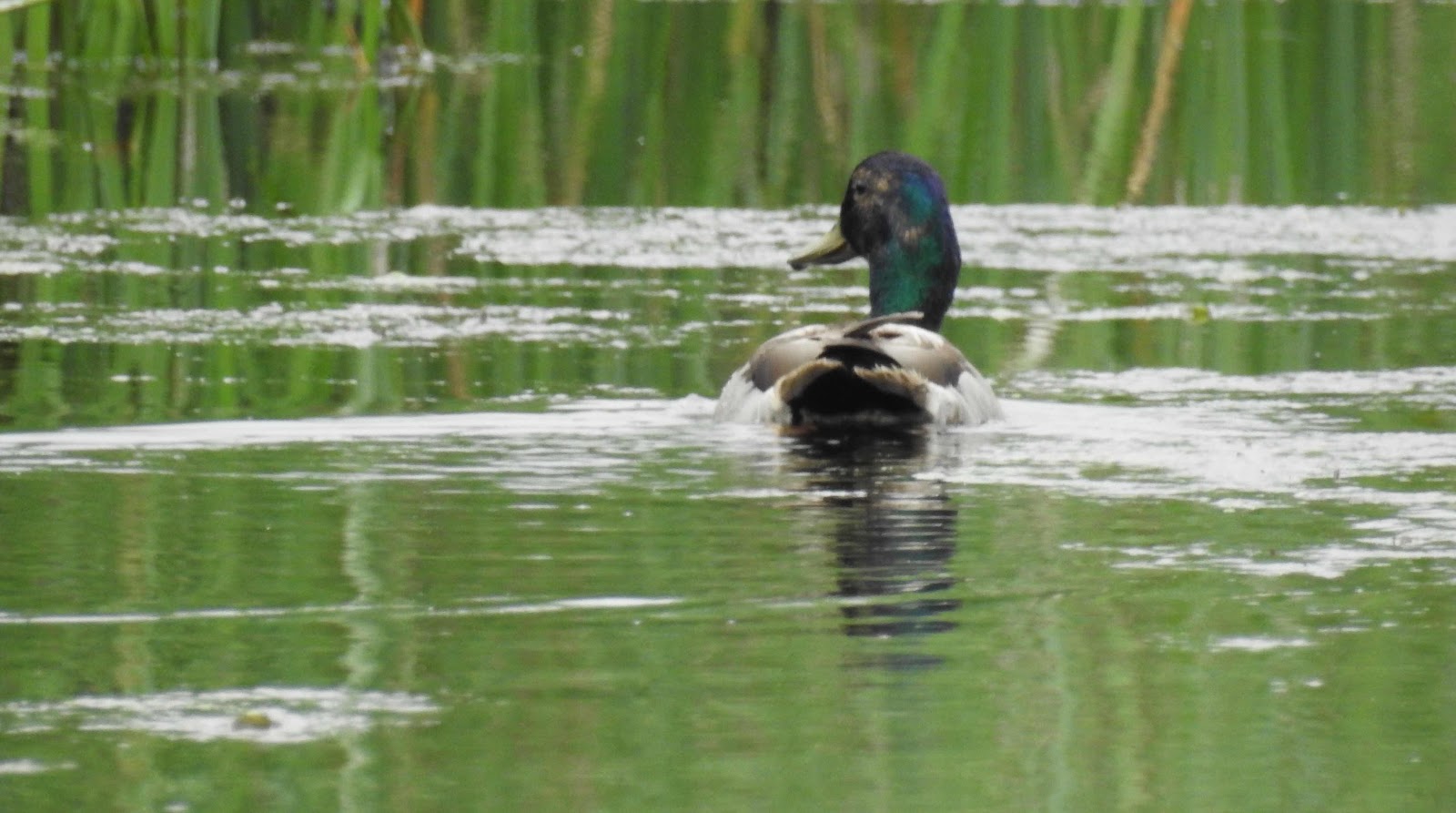 He looked bedraggled because he was molting. Ducks molt the same as geese do while their young are growing. Male Mallards resemble the females when they are molting, losing their bright feathers. The best photo I took of the male, shows how he is losing the green feathers from his head. The female appears to have started molting too if the tail feathers are any indication. 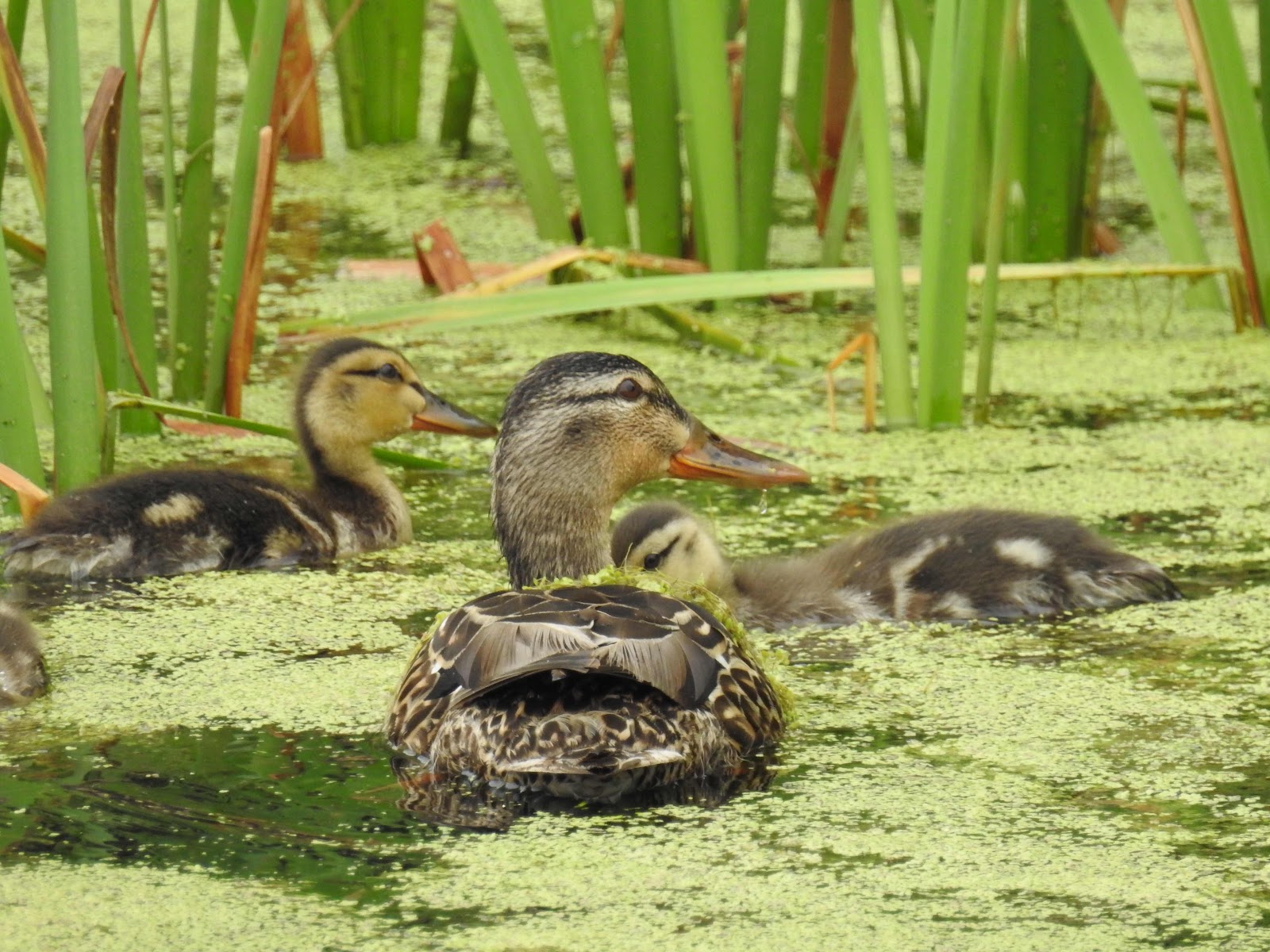 It will be interesting to watch there ducklings grow over the next several weeks if they stay in the area.

Lovely close-ups of the ducklings. Life for ducklings is pretty precarious though, so lets hope they all survive and thrive.

So cute, Marie. I love seeing these little balls of fluff and wish them all the best. I know all of them will not grow up to be adults, but I can hope anyway. :-)

The ducklings do grow fast.

They are very cute, you got some beautiful photos of them.

Awww.
Ducks are such good parents. I have often seen them with very big, rambunctious, excessively cute and demanding families.

How superb. Love the photos and am envious of your treasure.

I've seen them here on the golf course pond in the spring, and much smaller. I feel I've never seen them two times; they've moved on.

ooooh they are just so cute!! i saw and photographed several little families here today. i hope these babies have better luck than ours did, there are only a few left!!!

These are so adorable!:)

Lovely series, the ducklings are just adorable. Enjoy your day and the weekend ahead.

Your pictures are stunning. You must have a good camera.

They really are so cute, love the markings. Have a good day, Diane

So cute!!! Awesome photos. When my youngest wakes up tomorrow I will share with her. She will LOVE them!

If that's milkweed on the water, Marie, I get all excited when I see the ducks/coots/swans here on our canals, swimming through it and often eating it. It's a sight to behold. I can imagine the thrill it is to see these families growing before your very eyes.

brilliantly captured for sure ,i most loved the third though all are worth stare :)

Hi Marie, So happy that you spotted the little ducklings. I know you had been looking for them. That second photo is just precious. They are cute, aren't they? Best regards to you from Seattle! John