It’s that time of year again when the roads, fields and waterways are full of or lined with wildflowers. Among my favourites are lupins and Blue-flag irises.

Lupins are not native to Prince Edward Island and are considered an invasive species. They are native to western Canada and somehow made their way to this island on the east coast. They line the roads and hillsides is their variously coloured glory although purple is the dominant colour.

Driving down an old country road cut deep into the red soil, the lupins add colour to the roadside. 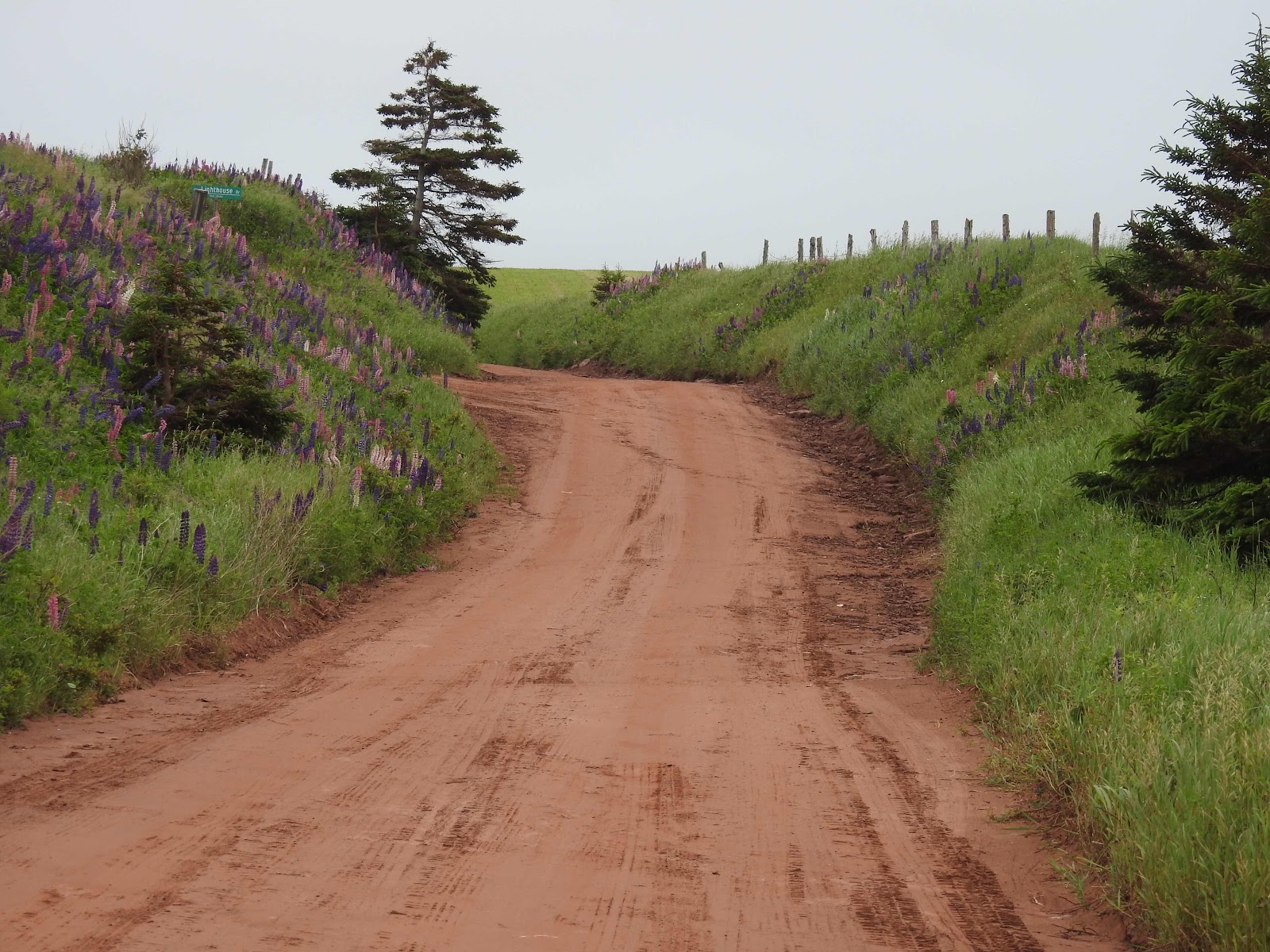 The purples outnumber pinks and whites 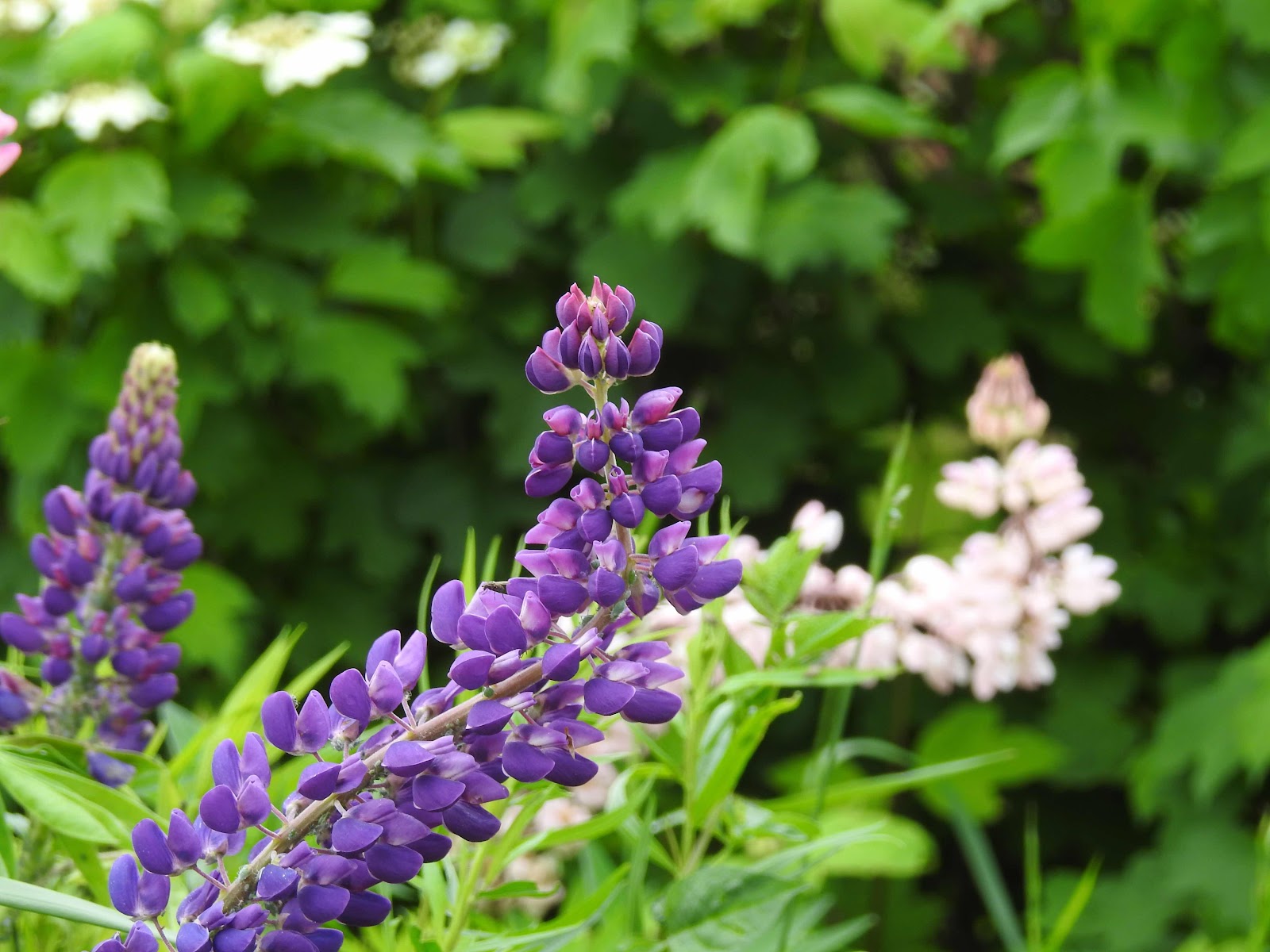 but all are enjoyed by bees and other pollinators. 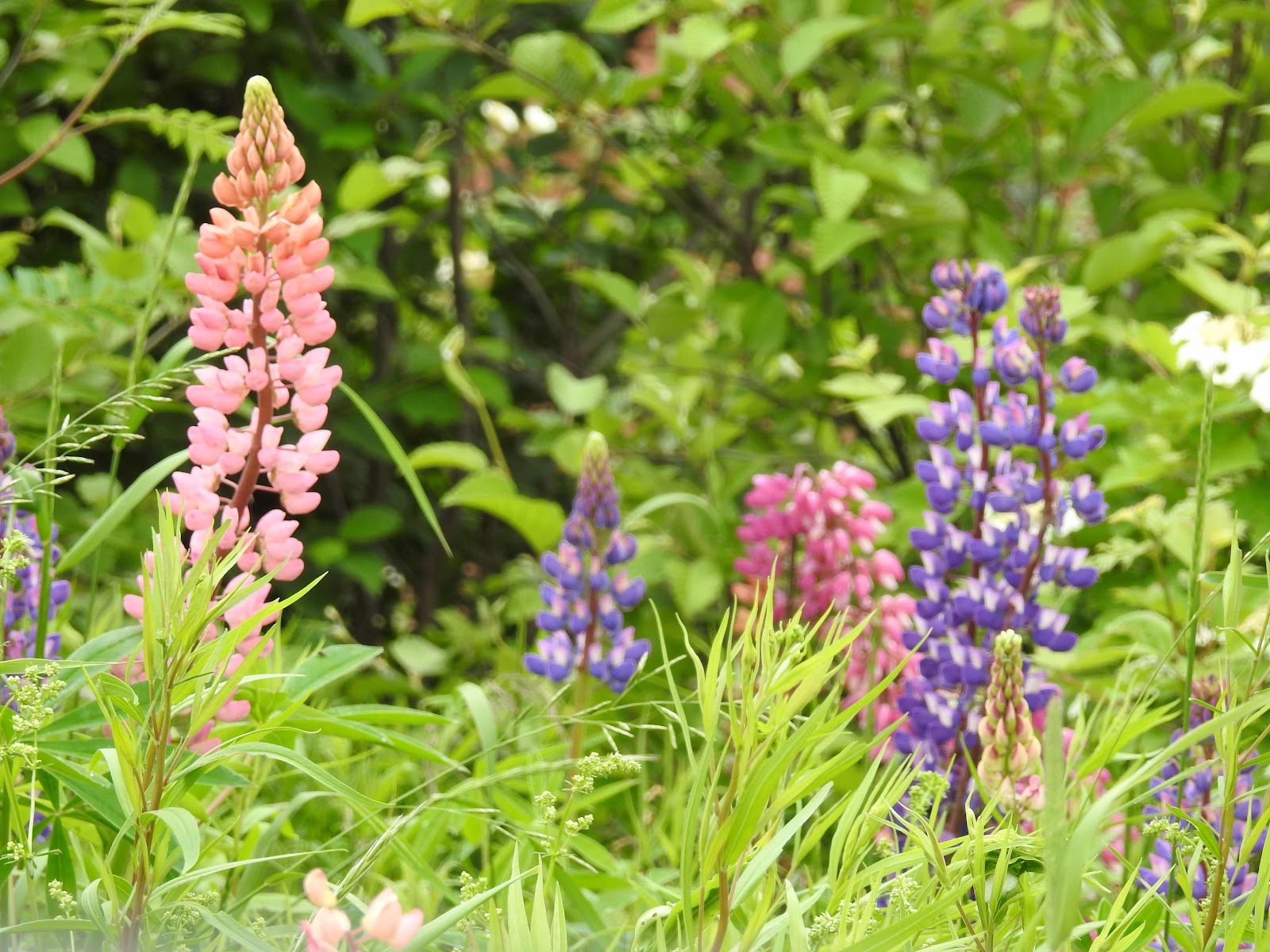 The lupins by The Lake of Shining Waters, also known as MacNeil’s Pond, line the foreground with the dunes of Cavendish Beach in the background. This scene is a seasonal treat. 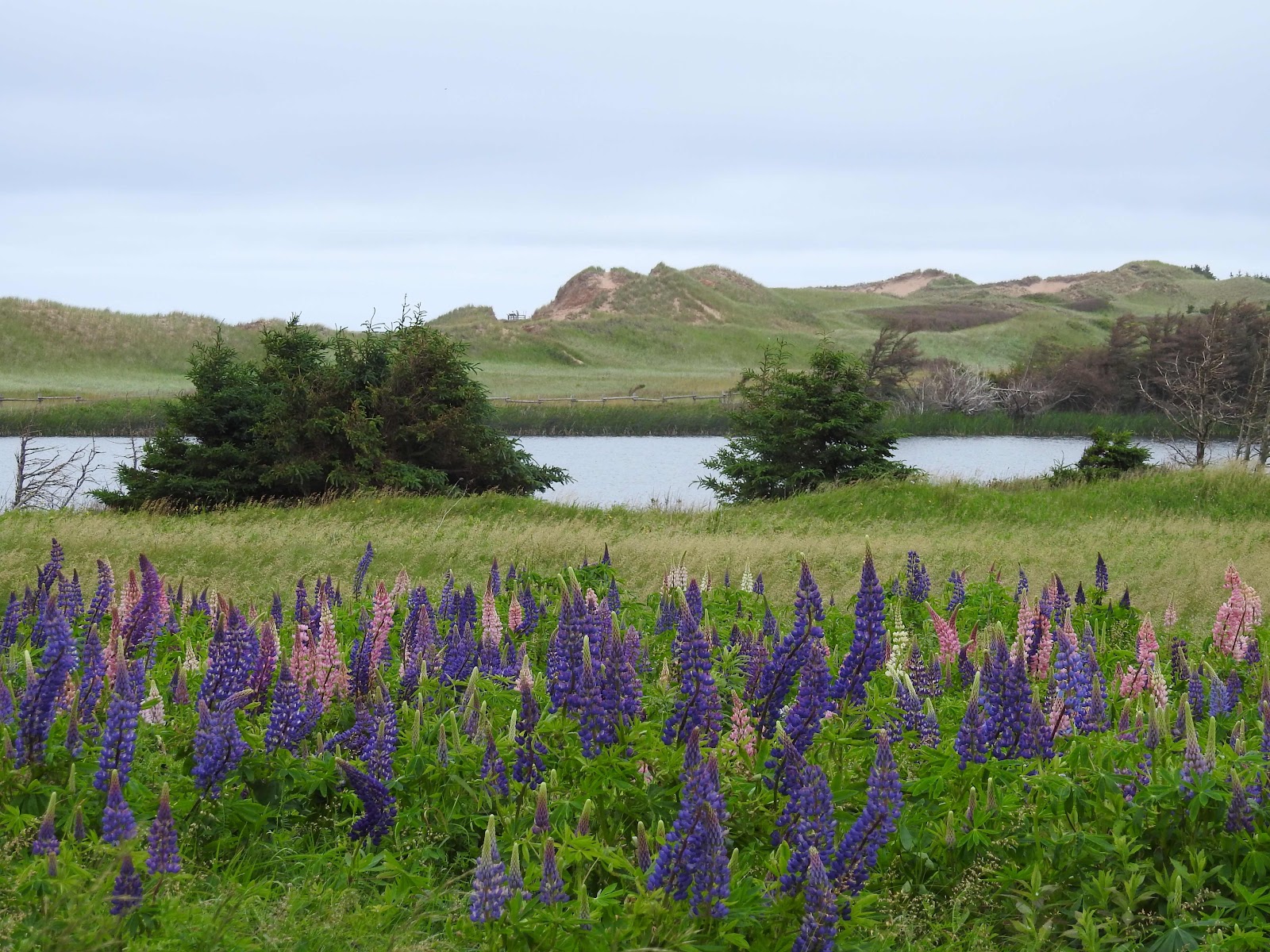 Blue-flag irises like water and grow along river banks and ponds. They are a native species on this island and remind me of my home island Newfoundland. These irises grew by the river in Maddox Cove when I was young.

The flowers are interesting in all their blueish-purple glory. The bud is royal blue and the sepals on the flowers have yellow and white markings. 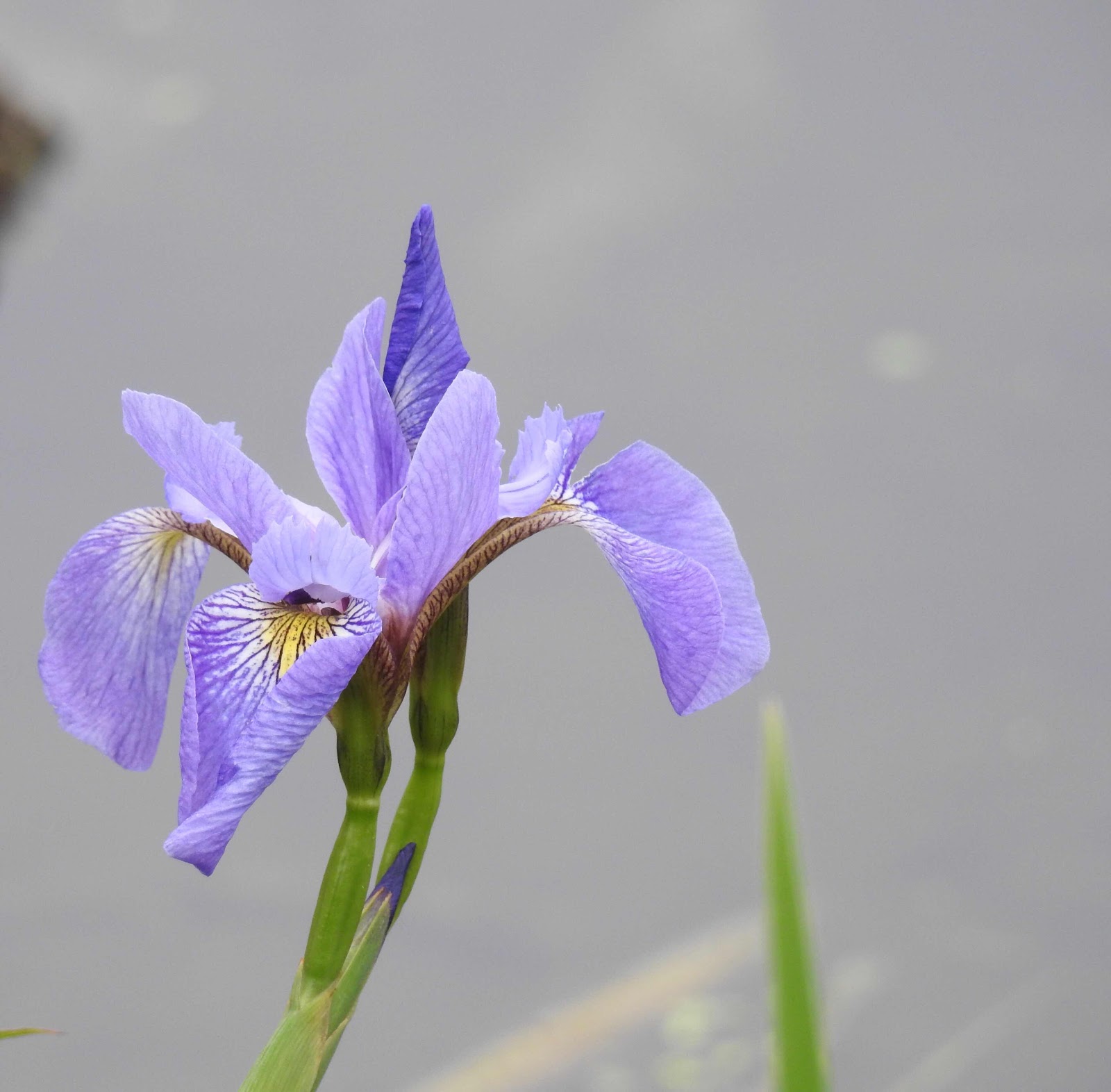 An individual flower is beautiful but a patch is mpressive in its natural setting. 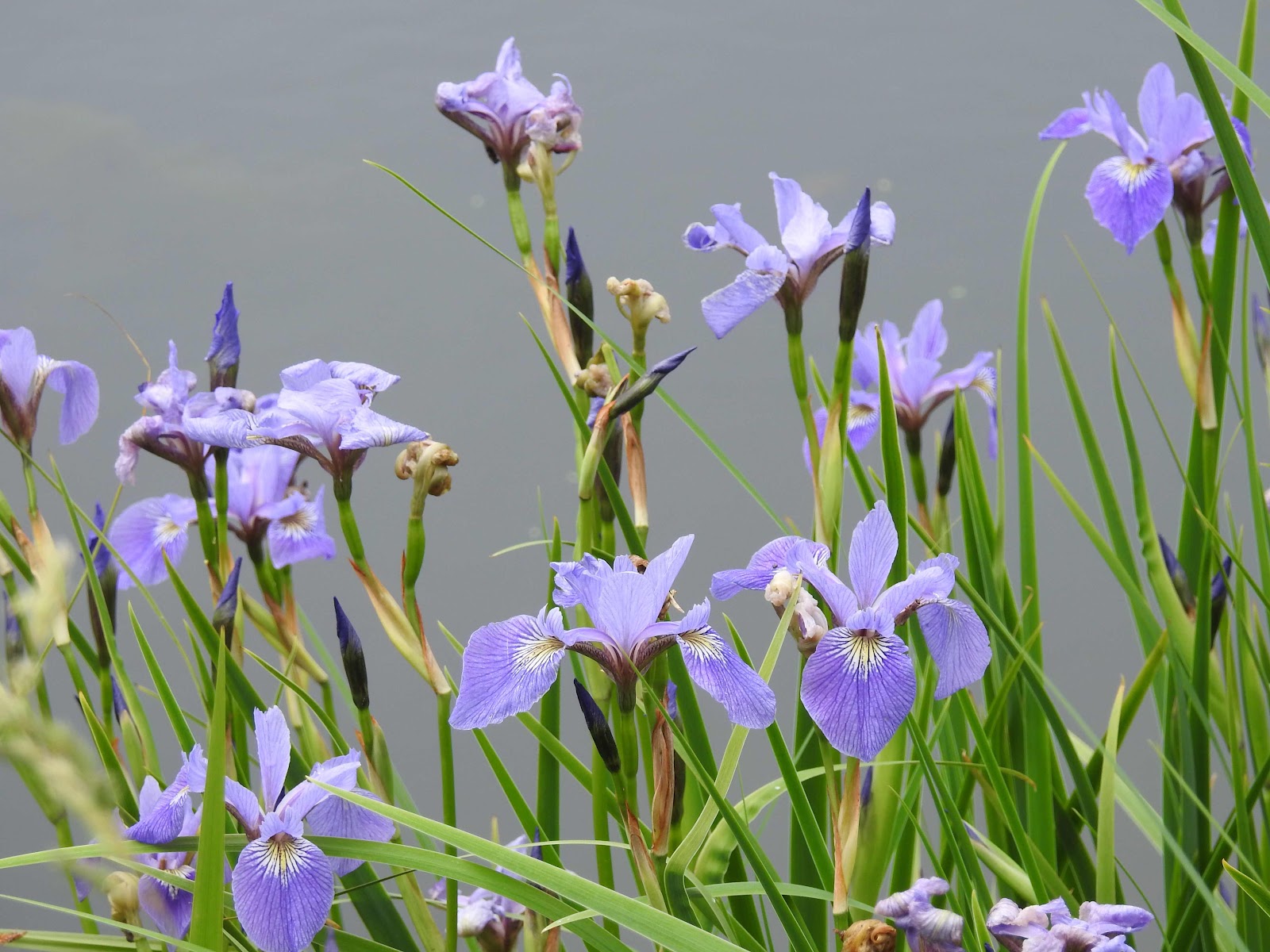 While summer has much to recommend it, among its best attributes are the little things such as the wildflowers. 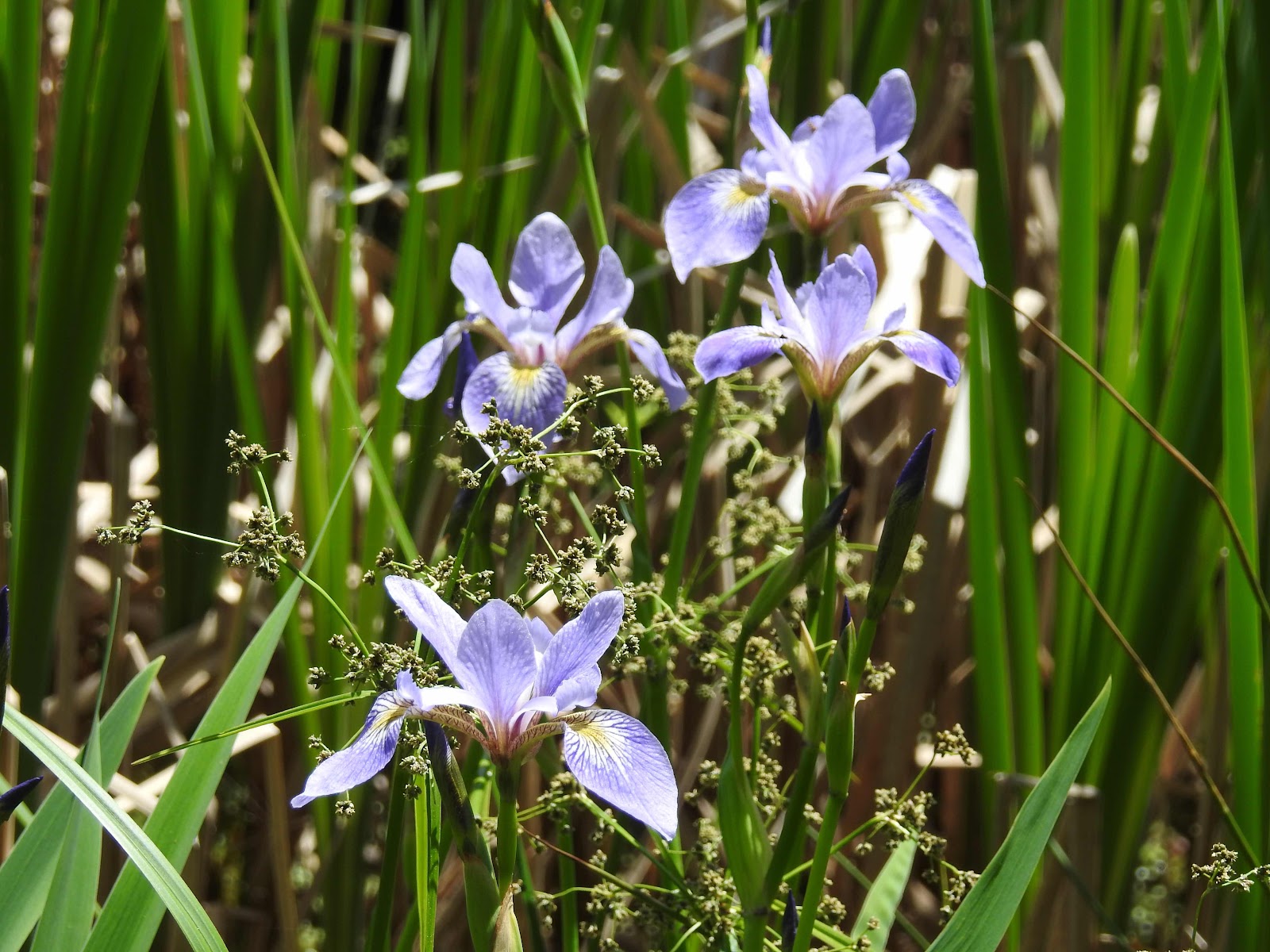 A scattering of beauty on the roadsides is always welcome. Lupins don't seem to grow wild here, which is a bit of a mystery as they used to seed themselves all over my parents' garden and needed no care at all.

Lupins are not a flower I grew up seeing in Western Canada. At least, not on the prairies.

Both flowers are beautiful. I love lupines in the wild places around here, but they haven't been as abundant lately. I don't see blue flag iris much, but they are so lovely. Thanks dear Marie. :-)

The wildflowers are all beautiful. I do love those iris. Beautiful views and photos. Enjoy your day and I wish you a happy new week!

They grow lupins as a crop here. Lupin flakes apparently have many health benefits. The fields are beautiful but I have not managed any photos this year. Have a good week, Diane

The Lupine Lady was one of the favorite nighttime reads for the young ones. How could one not love a lupine after reading that?

here, the iris is a delicate flower, needing much care in order to thrive. funny that they grow wild there!!

Beautiful flower pictures, so many colors of lupine. We have them here in Washington State both on the "wet" and "dry" sides of the Cascades. They are poisonous to livestock but critters don't eat them unless they can't find their normal forage. I've seen whole meadows of them in the wild up in the foothills.

Our irises have blossomed and they were very pretty while the blooms lasted. Especially the deep purple one. Now it's day lilies, yucca and hostas that beautify our flower gardens.

I love the flowers lining the dirt road. I know you are enjoying being out and about photographing all the wildflowers.

I don't think I've seen lupins before, but they're gorgeous. Thanks for sharing them! I love the irises, too. I've tried growing them, but haven't been successful.

The wildflowers are so beautiful and colourful.
Lovely photos, Marie.

Wow, wow and wow.
Both are most definitely garden flowers here - the lupines in particular.
What a spectacular sight.

Words fail when it comes to such beauty. I love the Lupins as well as the Irises. To see them growing wild would be such a treat.

You really captured the beauty of these flowers!
:)

I love flowers like those, especially when they purple:)

How amazing that they travelled to your country somehow just to cherish you :)

I love seeing lupins in a field at this time of year - ours are out now, too - but as you say they are considered invasive here and I was shocked the first time I saw lupin seeds for sale! I've relaxed a bit about that, although they spread so much I don't know if I'd ever put them in a garden. The irises are beautiful, too - that's what we have in our front garden by our walkway. They last quite well, too.

I love wildflower season! We were just in BC and there is so much more there than I ever see here in Alberta.

Oh my goodness!! The entire side of the road is covered and ohh so beautiful! Sorry that's an invasive plant! Love wild flowers!

Great flowers - not the sort I am used to seeing by the roadside!

Cheers - Stewart M - Wilson's Prom National Park (where I am surprised to have Internet access!)

Lupines seem to have largely skipped southern Ontario on their migration from the west to the east. Actually, I supposed they were introduced and happened to thrive there.

Hi Marie, I had to smile when I read, “While summer has much to recommend it, among its best attributes are the little things such as the wildflowers.” Right on! These wildflowers are wonderful. Love your photos. When I think about all the blogs I follow the ones I like best are the ones where the photography makes me want to visit the location in person. Your blog absolutely does that! :-)