It’s a long way down so I didn’t want to stand too close to the edge. Fences keep people safe in a number of areas. 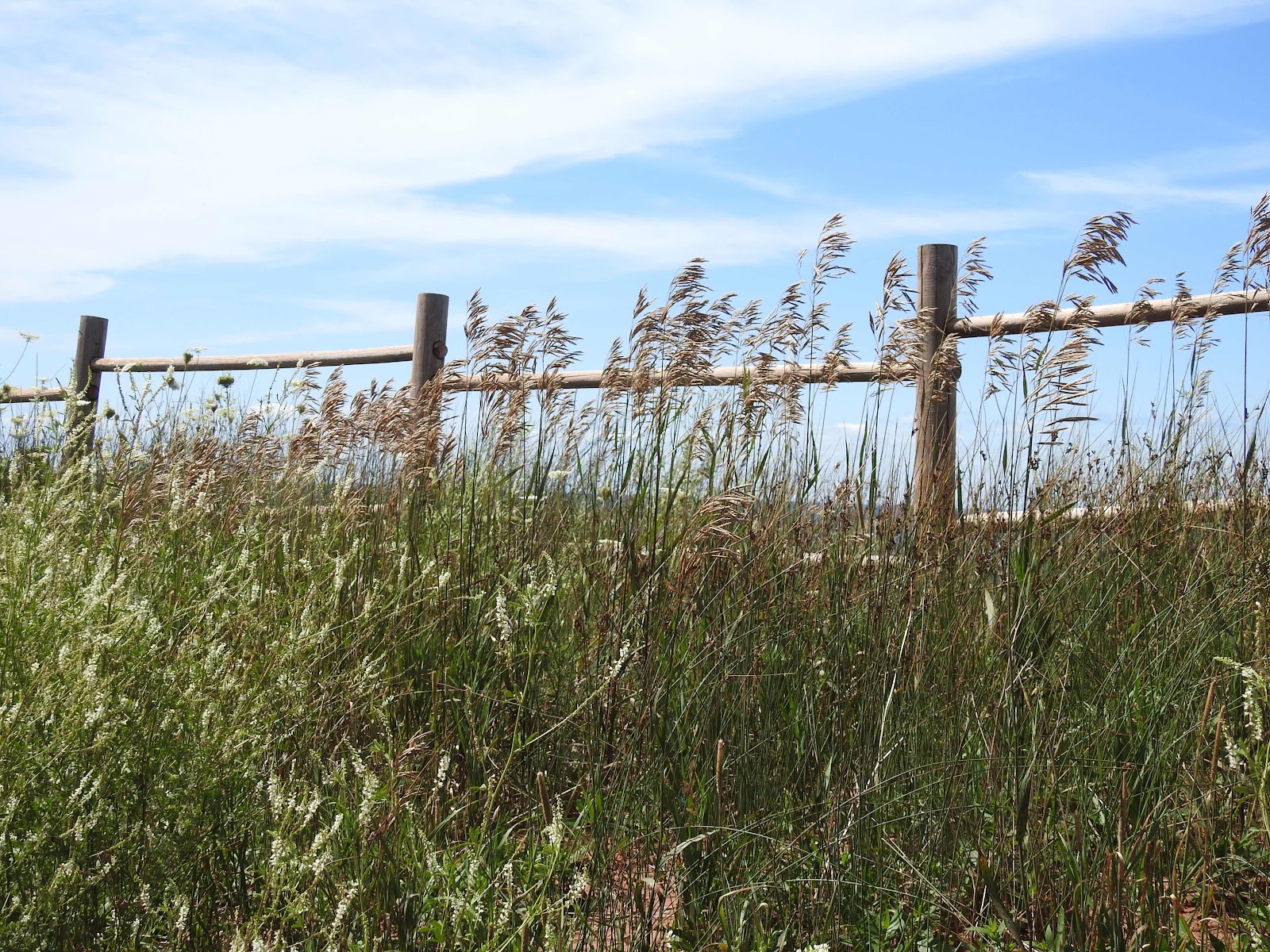 Lookouts, strategically placed, provide good views. The coastal path of the Black Marsh Trail is one of my favourites.

This trail parallels another trail through the forest along North Cape, each part of the trail providing a unique island experience. Both open to the Black Marsh, a huge peat marsh which drops off the sandstone cliffs onto the beach 10 meters below. 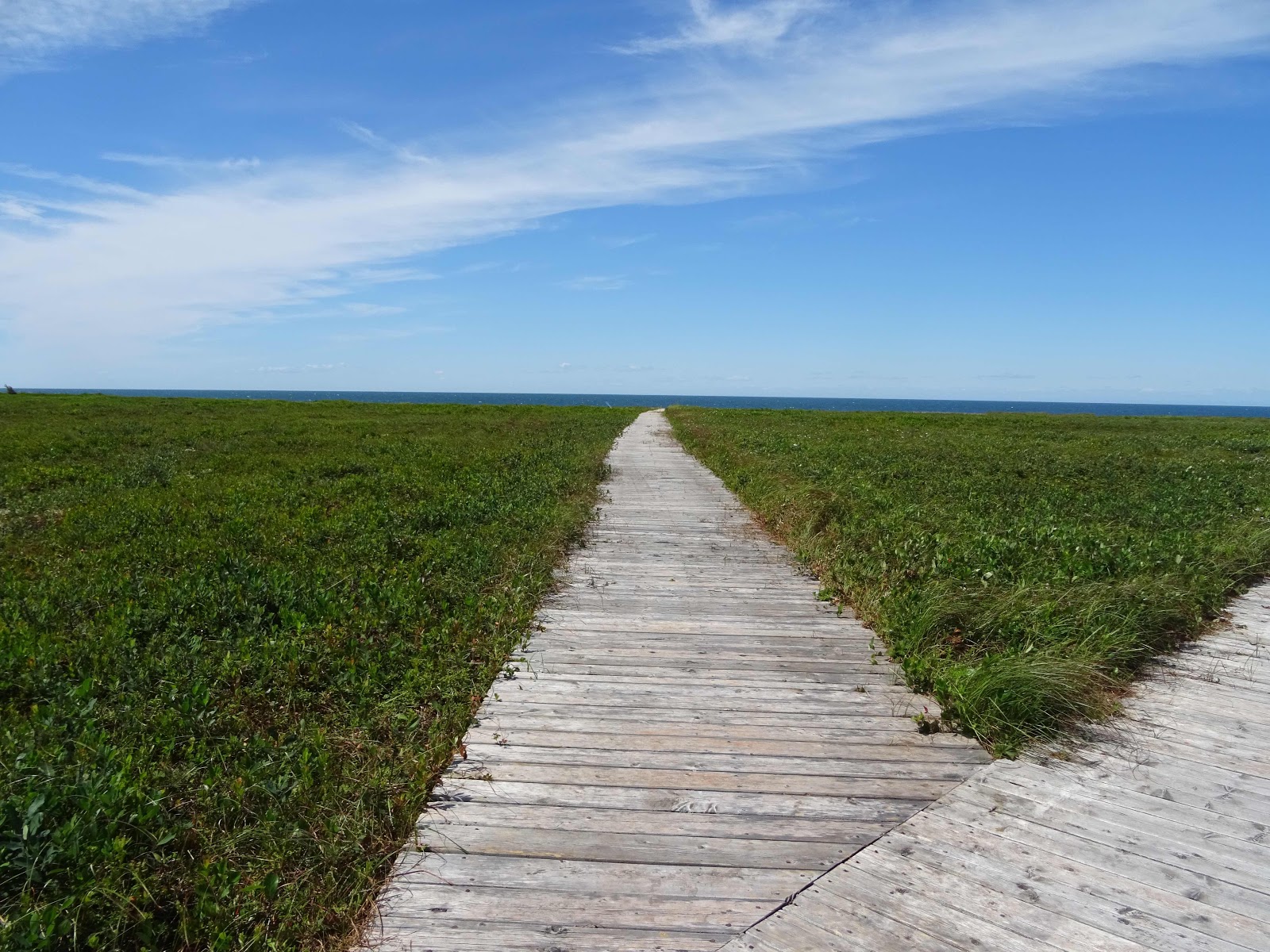 There are some unusual plants on the Black Marsh. The only one we could find was the pitcher plant. 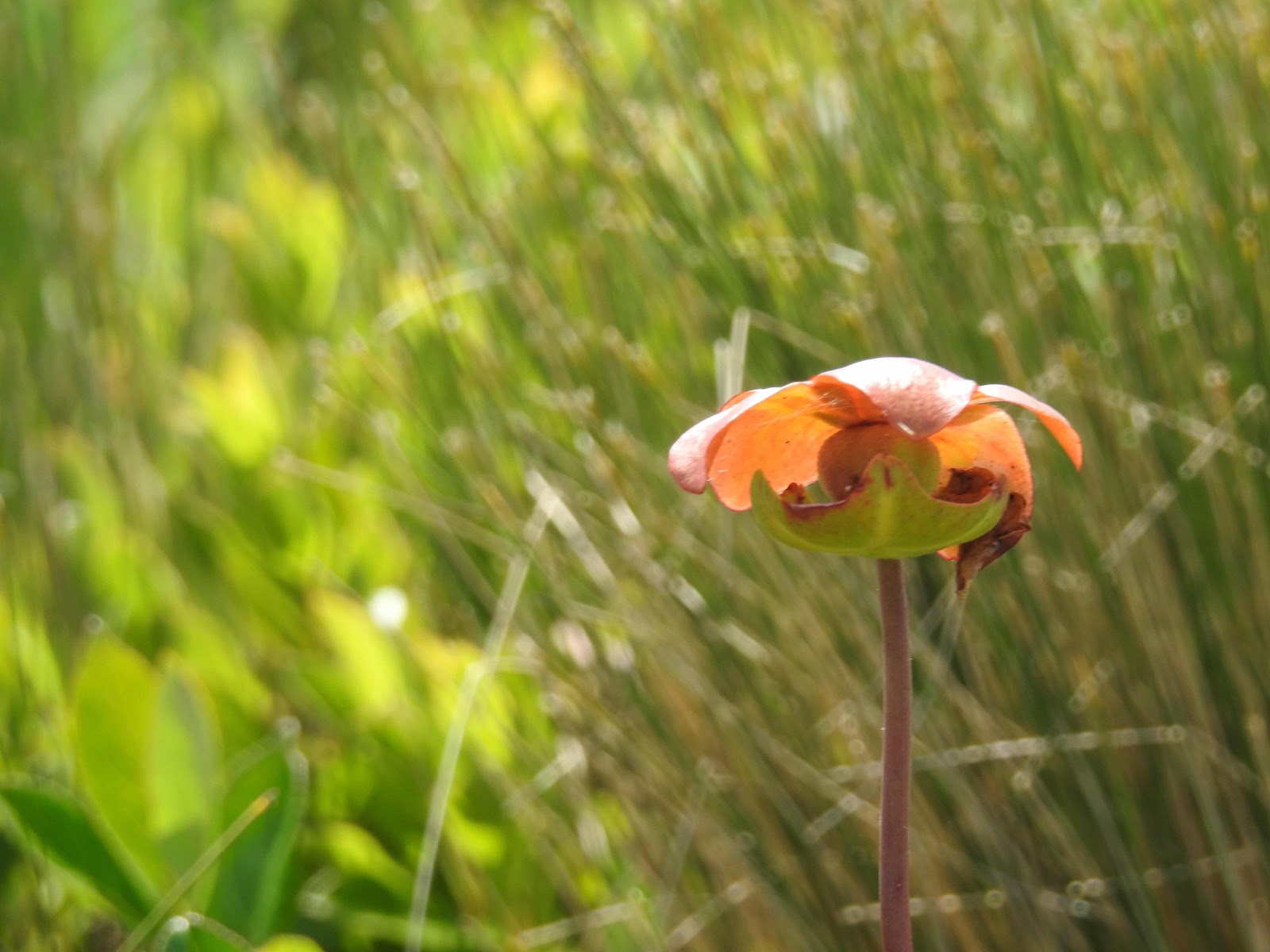 My husband and I are from Newfoundland and know this plant well since it is the provincial flower of that island. The plant lacks chlorophyll and is carnivorous which attracts insects into the pitchers on the ground where they are digested. The flowers are unique. We didn’t expose the pitchers in the bog at the base of the plant because we didn’t want to disturb the marsh.

Walking along the coastal trail near the marsh, one sees the effect of the icy blast of winter on the trees along the cliffs. 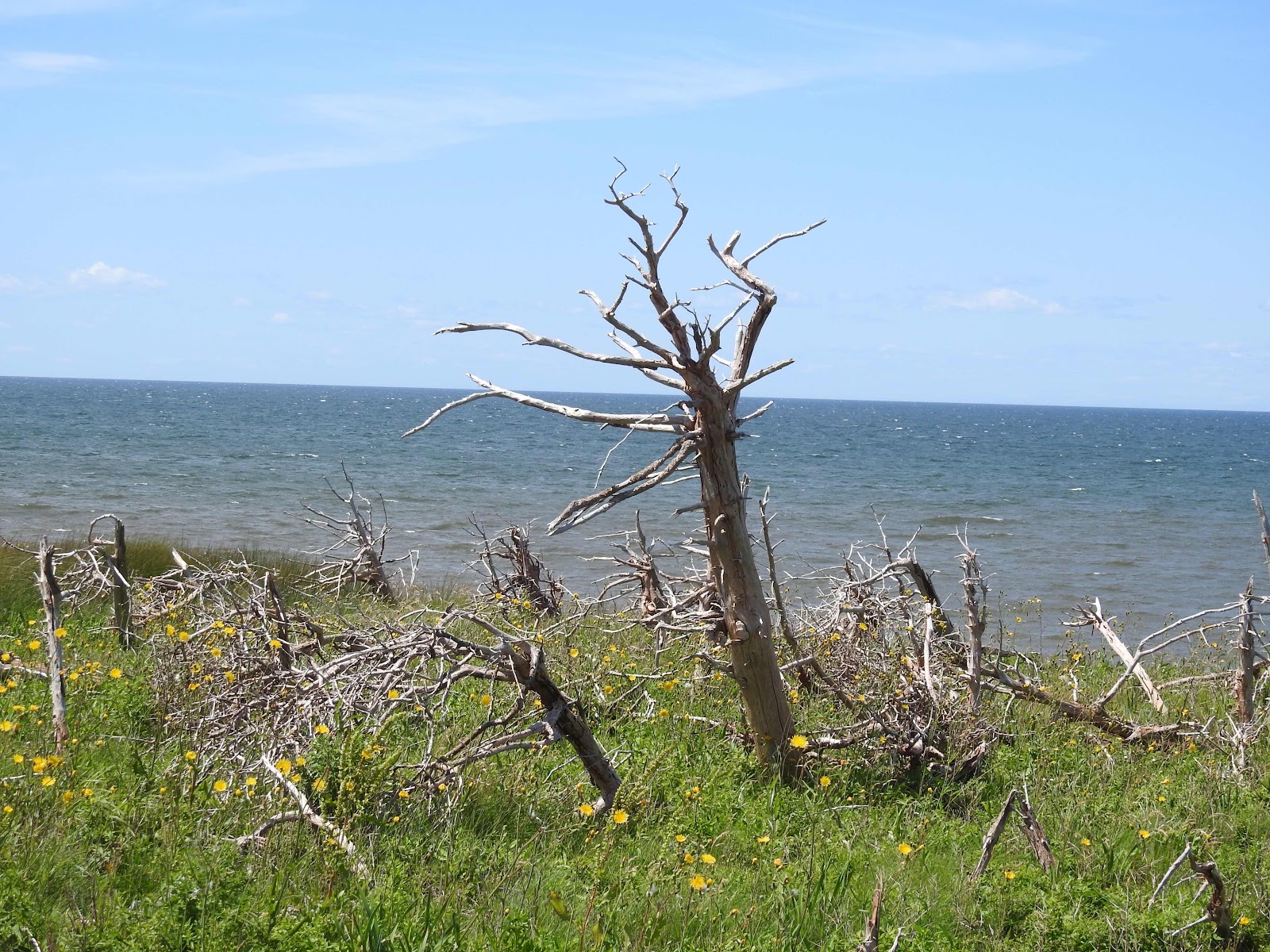 They are art now, weathered remnants of former majestic glory. They have found an artistic raison d’être in this natural gallery until the sea finally claims them. 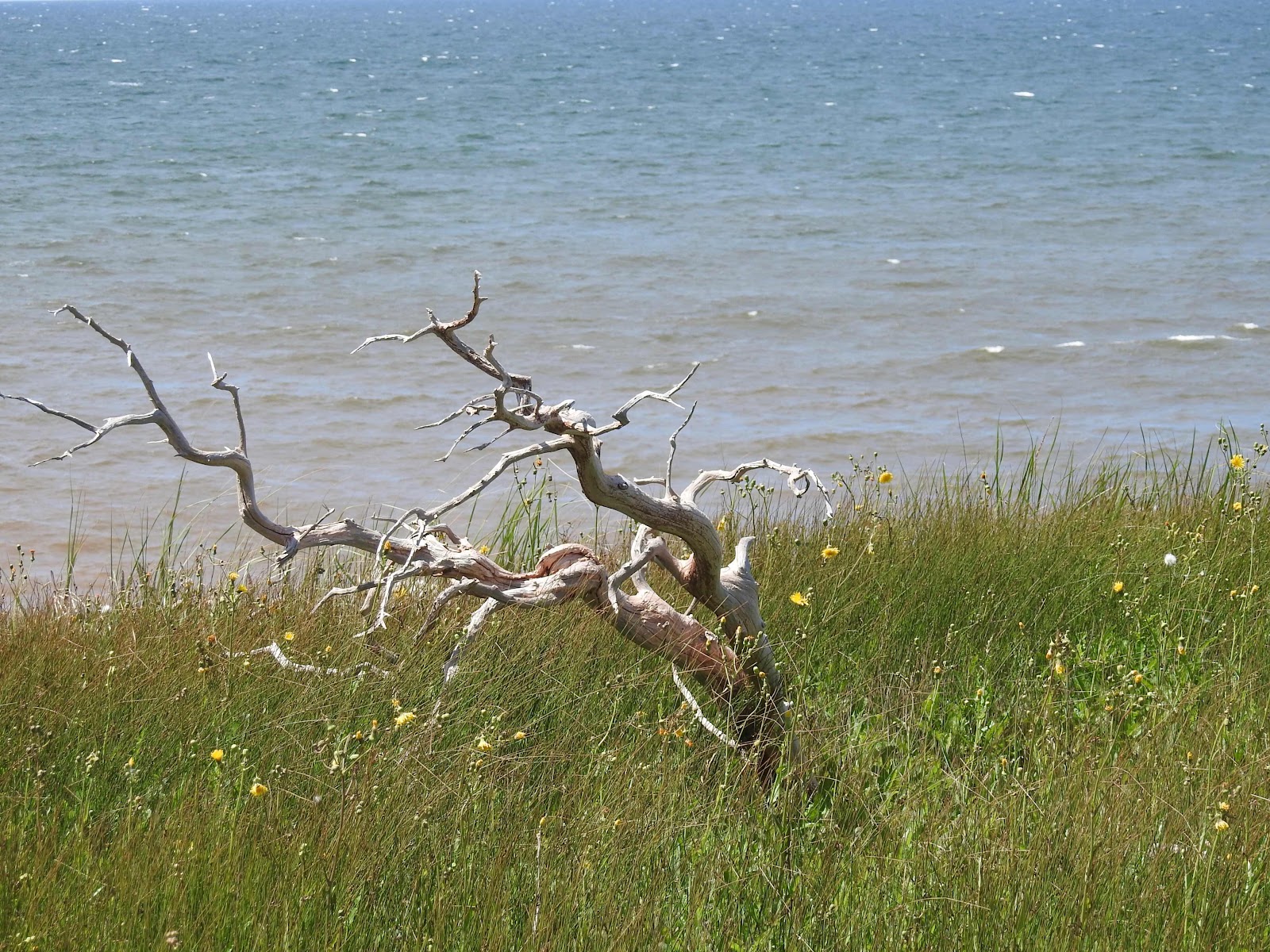 The sea stack draws visitors to this place as well. It has changed over the years of course, from its days as an elephant in the late 1990s to the shape it presents today. 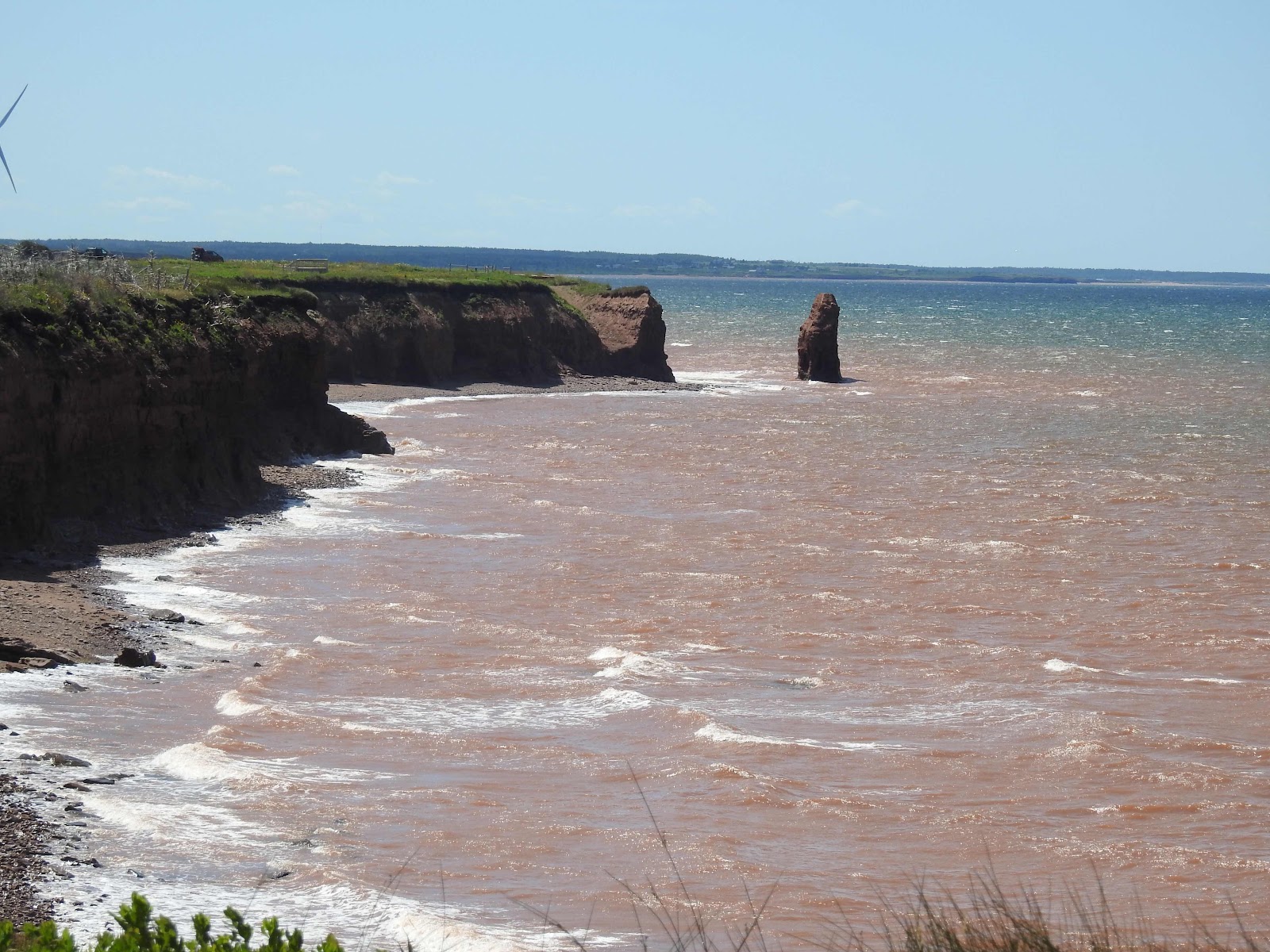 On the way back along the coast, we stopped at the lookouts. 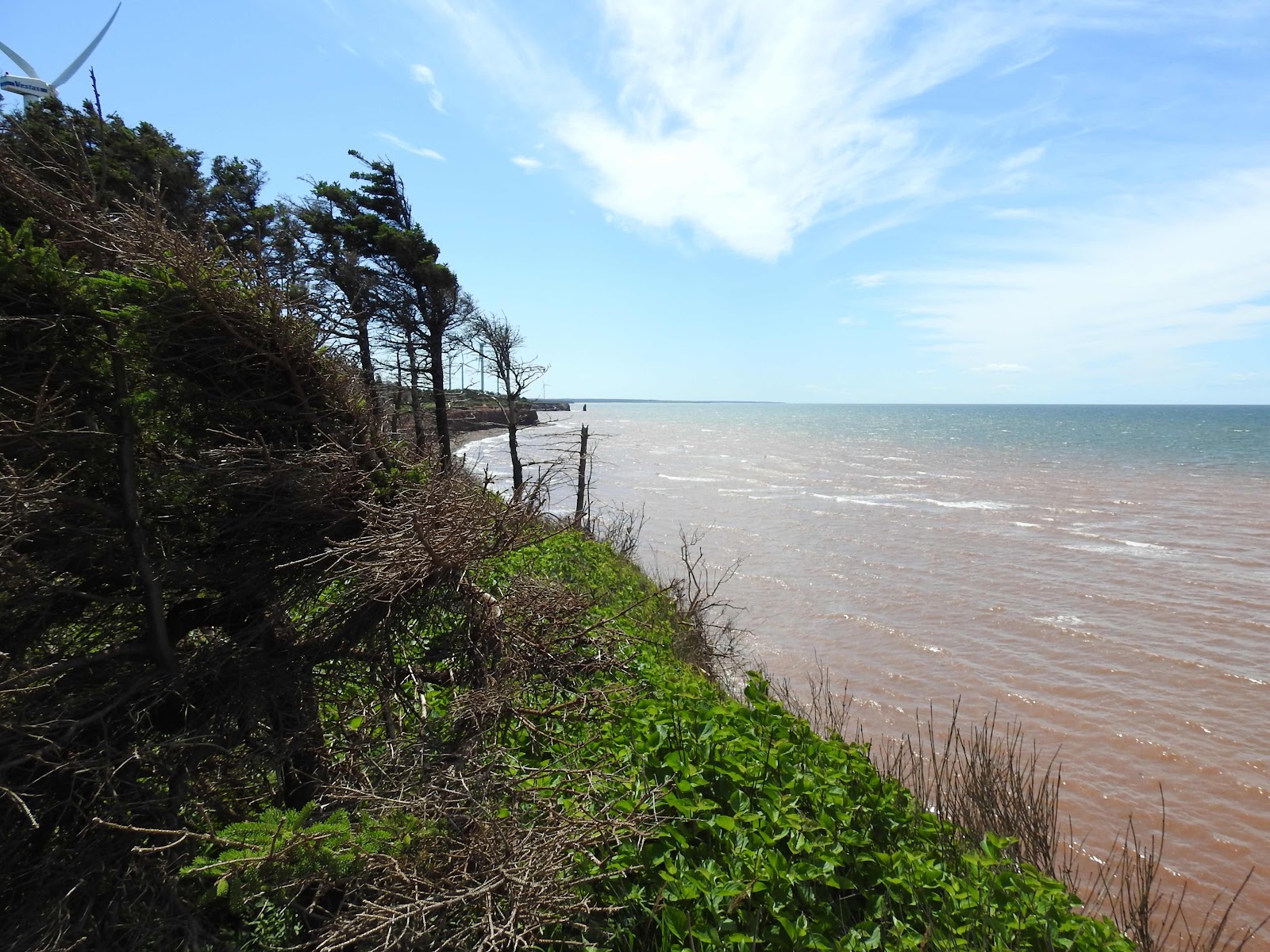 The trees clinging to the edge of the cliff defy gravity. 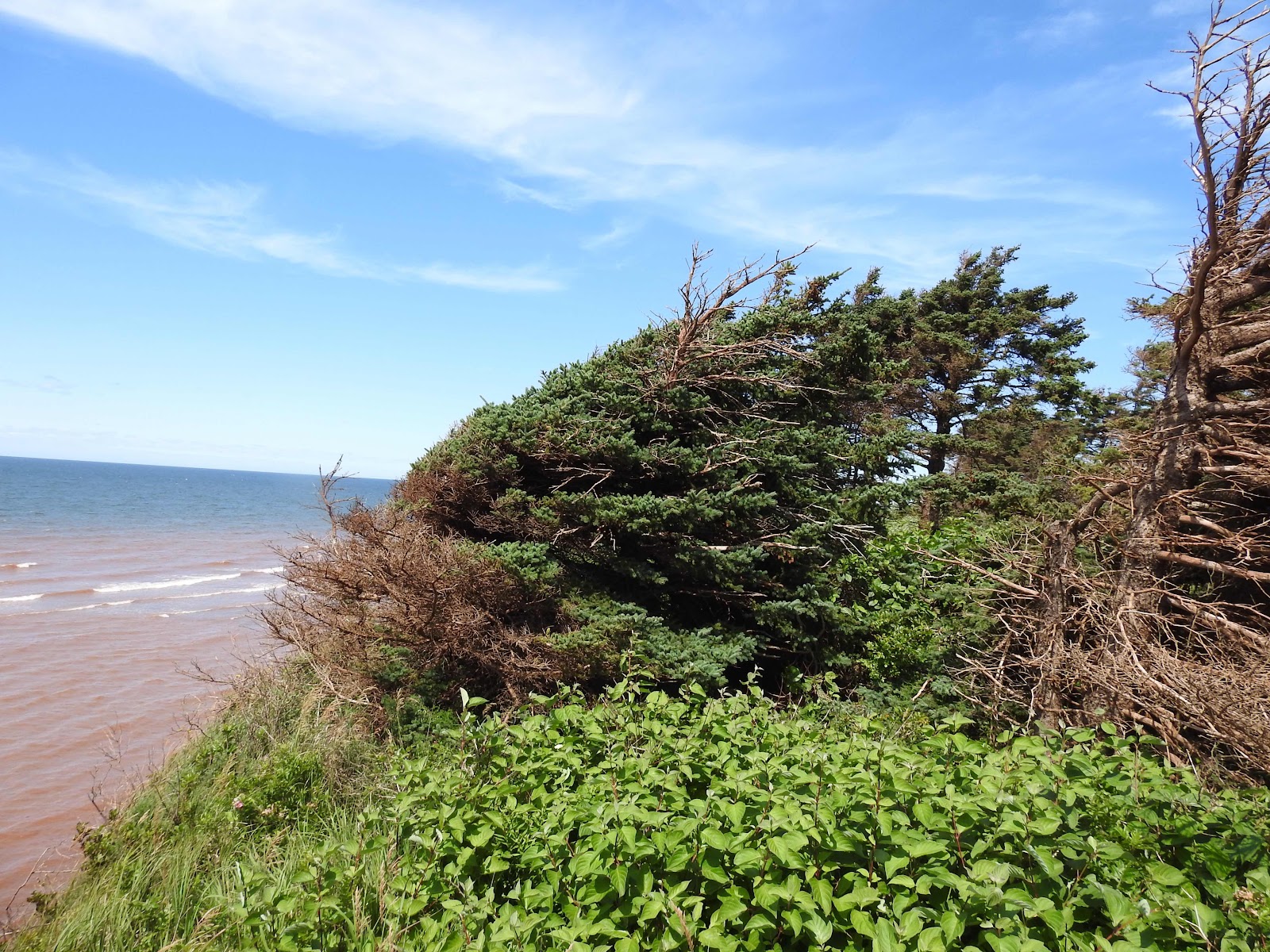 I walked the trail to the lighthouse and watched as seagulls floated on the breeze. 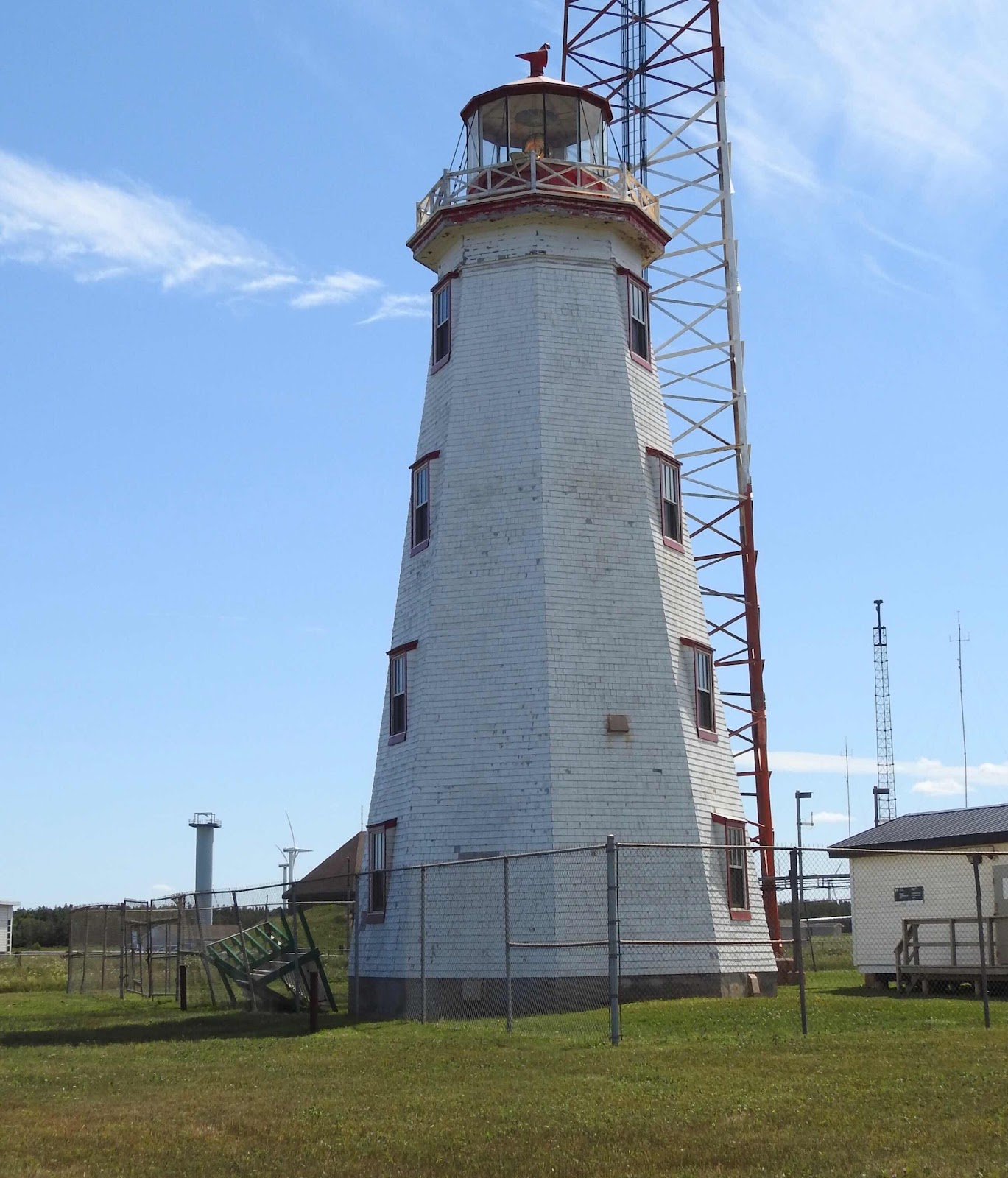 Bank swallows darted overhead. After numerous photos, I captured this shot of one leaving the nesting area. It’s hard to capture bank swallows in flight. 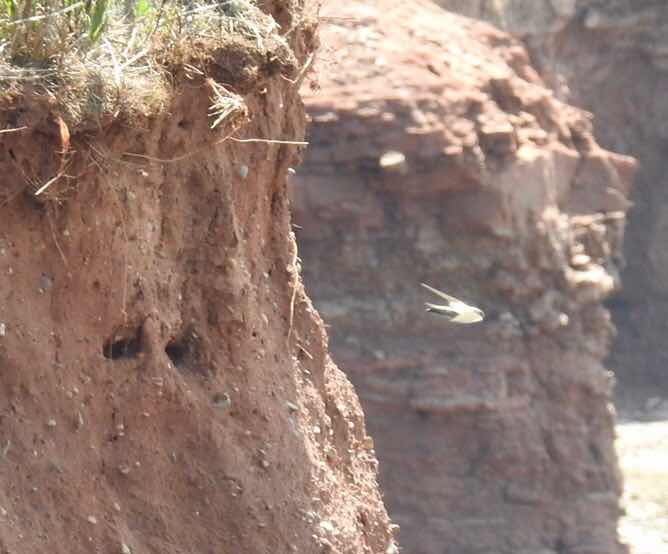 We had a picnic and made a few more stops before we headed home.

Wonderful collection of scenic photos. I like the boardwalk trail. The marsh and the cliffs are just beautiful. I have found pitcher plants in various places, they are neat. I love lighthouses, nice capture of the Bank Swallow. Take care, enjoy your day! Wishing you a happy weekend!

That sounds like a perfect day. All of your photos are so gorgeous, and what a beautiful area too. That is a great capture at the end of the bank swallow!

Sounds like a wonderful walk, so different to what I am used to here. Keep safe, Diane

It's a wonderful walk, from the looks of it. I could almost feel the wind from your pictures. You captured that swallow perfectly! I love learning about your island from your posts. :-)

I have seen the occasional pitched plant at the marsh where we go to visit the ladyslipper orchids but the orchids come later (I think) so I haven't seen many and didn't know they are carnivorous.

Your first sentence could be the beginning of my autobiography. Lovely.

I am particularly fond of the picture of the wooden trail leading off to the ocean. It made me smile.

Looks like a wonderful walk. I've seen Pitcher plants in select locations up the Bruce Peninsula here in Ontario.

Wow!!Such beautiful photoes today!I enjoyed them very much!Special that meat eating plant..i have got an Venus(Dionaea muscipula) it catches flies and wasp but really I dont like the plant.
I cant tell which photo i like the best because I like all of them.It is very nice and interesting to see how others live and their walks The Lighthouse is a dream :)

A carnivorous plant!!! Just growing along the way. Wonder how usual that is?

Stay away from the edge. I would tooooo!!!!

Wow! SUch beautiful scenes. i love the low angle of the first one with the fence. But, hey, I love them all.

that is a beautiful lighthouse, such a pretty area!! i'm glad you were able to have a picnic!!

the first picture is so pretty!!

Such beauty and only a walk away. Fantastic scenic photos, Marie.
Have a wonderful weekend.

A marvelous place to explore.

While stuck here at home I truly enjoyed your walk. What a wonderful place. So much beautiful scenery.

Thank you (so much) for sharing the beauty and the wonder.

Great that you have a regular habit to get out and see things.

I think swallows the most elegant of birds, climbing, diving, darting, or sitting in a row in the mornings, on the wire.

I so would love walking there...so much to see and I bet it feels just wonderful to be out.

Peat bogs are wonderful places for unique plants and the attract specific birds too.

You live in such an interesting and beautiful area of the world! Lucky you to have all this beauty so close and be able to revel in it.

You live in such a beautiful area. Well done on catching the swallow.
I don't think I've ever seen a carnivorous plant in its natural environment before.

This is a really fascinating post with wonderful photos as well. I enjoyed reading it.

Another lovely walk for us to enjoy. The fact that you have so many boardwalks amazes me. The Pitcher plant and swallows are strangers to me. I so enjoyed seeing them in your photos as well as imagining what you were experiencing. Thanks so much for sharing. Happy Sunday!💖

The trees are certainly windswept. I can't begin to imagine what it must be like in the depth of winter.

Beautiful! I especially like the dead tree photos, Wonderful contrast.
Have a blessed day!

You never fail to amaze me Marie. Both Trail 1 & 2 are lovely ... especially with your wonderful descriptions.

There is beauty in every single picture!

What a beautiful day. The sky is crystal clear. Wish I had been there to see that.