People of a certain age will remember having a pen pal or know of someone who had one. Growing up in Newfoundland, I had several pen pals when I was in school, teenagers in Alberta, Borneo and Taiwan. They opened the world to me at that time. We exchanged letters once a month, shared details of our lives and culture in words and photos via the postal service. We lost contact over the years but I have thought of them and wondered what they did in their lives. 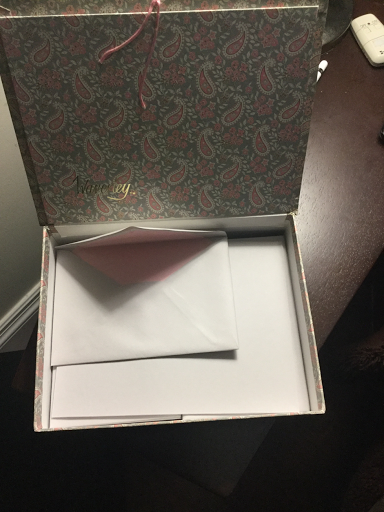 In those days, I received a box of stationery for Christmas, matching paper and envelopes used to carry my teenage thoughts around the world. Today, I still like to have a nice box of stationery, though it is not used near as much these days. Today, an IPad and an app are all I need.
Now, blogging and following some other blogs, is like having modern day, digital pen pals. These new "pals" are all over the world, and blog on any variety of issues or topics, humourous, inspirational, political, arts/craft, genealogical, photographical, historical, cultural, and travel, to name a few. The only limit is one's imagination.
Now, leaving comments on other blogs, writing and responding to comments on my blog, let me communicate with people around the world. Blogging has helped me continue the writing begun in childhood, at a point in my life when I have time and more to say. These digital pen pals open the world to me today just as the traditional ones did years ago. The wonder of modern technology has made these "pals" easier to access than traditional mail ever made their predecessors.
This era of mass communication enables us to have the world in our homes in an instant. However, there is nothing like communication with people yourself to give you the essence of their culture and who they are. Something old is improved for the times.
Posted by Marie Smith at 16:09

Yes, this is very true -- blogging and commenting often reminds me of the old "pen pal" days too. When I was a kid in Manitoba, my pen pal was a girl in Ontario whose father had a tobacco farm. I don't remember anything about her now except for that, LOL!

I find the Blog world interesting but have never embraced FaceBook or Tweeted. I can't ever remember having a Pen Pal. I know girls that did but then they always were brighter and could write.

In earlier internet times, like 15 years ago, you could find email pals. I wrote to a fellow in Singapore, another in Japan, and one in the South. I still keep in touch via FB with one in New Hampshire.

Wordpress decided your very nicecomment my blog was spam, so I deleted it, but I will restore it. Checking you out from Ginnies blog. Yes, times change. Pen Pals, I've had them. My Aunt Marge was my last correspondent. My sister no longer writes letters owing o neurapathyin her hands. Good to have blog pals. Hello again, Dianne

My pen pal in Alberta lived on a cattle ranch. Wish I could remember her name.

I only knew of girls with pen pals too. I guess the boys didn't want to write though lots of them were pretty smart.

I wasn't aware of email pals. I was working at that time and hardly knew I was in the world myself, let alone what anyone in the rest of the world was doing. Retirement is wonderful.

Hi Dianne! Good to meet you via blogging. Hope you have a great week.

Yes, I agree, blogging is very like the penpals we used to have. As teenger I had a male penpal in Durban, South Africa, and a female penpal in France, who I met when I went to France on a student exchange. But sadly I have lost touch with them now. Wonder where they are.

Good morning Marie
Your post reminded me that I had a male penpal in Thailand when i was in high school.
That was a long time ago, and a part of my cherished memories.

Social media may make it possible to find them!

I am glad to help with bringing forth good memories, Tomoko.

I have enjoyed learning about other cultures and meeting my "pen pals" all over the world. You are one I have found just recently and have enjoyed very much. Thanks for being my pal! :-)

I am glad to have found your blog, Jan. It inspires me!

I have made some very dear friends through my blog. We've visited each other and I consider 2 of them "Sisters of my Heart."

You said exactly my thoughts about blogging. I blog mainly to make friendships and learn about people's everyday life. Also so my kids who lives far away can see little things I am doing. I also had pen pals in the past. It is very interesting that you lived in Borneo and Taiwan.
Thank you for these thoughts Marie!

How wonderful! you are very lucky.

I have never lived to those places. I had never been outside Newfoundland until I was older. I can't remember how I made contact with the pen pals, but I imagine the school was responsible.

Hi Marie, I too had pen pals when I was a child. It has been wonderful to connect and make friends with so many people around the world with my digital pen! I'm so glad you found my blog and introduced me to your lovely one. I shall enjoy following you and finding out more about where you live. Sarah x

I am glad to have found you as well. The landscape looks similar to my Newfoundland home annd I have numerous ancestors from Dorset and Somerset. I look forward to following your blog.

I had a pen pal too. I lived in Texas and she lived in Canada. I thought snow was on the ground year round. I continue to write friends and family as I went off to college and then after I got married. I enjoyed it and learned to express myself. Someone needs to start a find your pen pal registry!