Having always lived on eastern Canadian islands, I know some stories of shipwrecks and disasters at sea, but I had never heard of the Yankee Gale until this past week. This story goes back to the 1850s when there was a fleet of hundreds of American schooners, fishing off the northern coast of Prince Edward Island. These vessels were seiners, fishing for mackerel, using large nets to surround and scoop up the fish. They sailed out of Boston and Gloucester, Massachusetts. 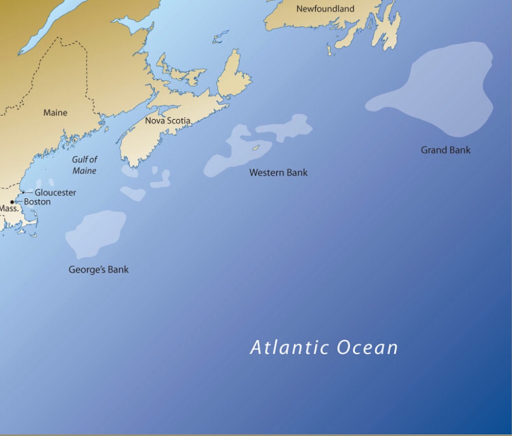 Map from this article.
By the 1850s, Gloucester was the largest fishing port in the United States. At that time, there were as many as fifty fishing companies based in the port city, sending two-masted, wooden vessels, designed for rough seas, far off shore, as far as the Gulf of St. Lawrence. They fished for mackerel which they packed in salt in the holds of the schooners.
In October of 1851, there was a huge storm that lasted for three days. It is known as the Yankee Gale because there were so many American vessels and lives lost in that storm. There are conflicting reports of the size of the loss but one report contends that 120 vessels sank and 250 people perished. There may be many more people unaccounted for as well. Bodies washed ashore for weeks and most could not be identified. They were buried in graveyards along the northern coast of Queen's county.
With our telecommunication today, such news would be around the world in an instant, forensics would identify bodies, sunken vessels would be searched and families would bring their loved ones home for burial. Imagine what it was like in 1851.
Eventually, the surviving schooners started to arrive back in their home ports. Wives and children waited as each vessel sailed into port, initially not knowing about the tragedy, then hoping against hope that their loved one was on that next vessel on the horizon. The last schooner to return must have brought joy to a few and complete devastation to many.
Those who make their living on the sea take huge risks every time they venture out, even with the equipment and vessels we have now. Today, I remember the brave people who gave their lives in pursuit of a livelihood on the sea, especially the victims of the Yankee Gale, and the families they left behind. All long gone, but not forgotten!
Note: my interest in the Yankee Gale began with the book These Roots Run Deep by Marion L. Reid.
Posted by Marie Smith at 03:45

I'll look this up as I'd never heard of it.
We were doing a survey of the shoals off Margate years ago and I was horrified at the number of ships lying under the waves. In some places they were almost touching. A dangerous job back then.

What a tragedy. I will look for that book at my library, since I know quite a few fishermen here in Bellingham. Thanks for the information, Marie. :-)

Very fascinating tale. Some of my ancestors on Dad's side come from New Hampshire (originally from Nova Scotia), so I find anything about this area interesting.

Fascinating stuff. You are so right ... in today's world it would be telecasted practically as soon as it happened.

It is the same all around PEI and Newfoundland. Such a dangerous job!

This story takes about a page in Marion's book when she writes about her grandfather who was a sea captain. It describes life on this island for the last century and a half and her life in particular. She is an incredible woman.

So true. So many never recovered and no peace of mind for their families.

So many people along the eastern seaboard travelled between countries, among provinces and states as they wished. We have much in common really.

Ginnie, I can imagine Anderson Cooper lashed to a tree for days covering this story as the storm raged around him. It must have been horrific however!

Thank you. What a frightening time it must have been.

It must have been devastating for so many American families. All people who live by the sea understand that terror!

It is a painful story. I completely agree with Mage. It must have been a frightening time.

Different times in several respects, such as the ease of crossing international boundaries to fish where they wanted.

when i first read the name i thought the story would be about kind of bird as it sounds like nightingale ,it is scary one though living near the sea is sometime brings such disasters unbelievable

Many families still fear for loved ones working at sea.

The sea can be a cruel master!