Do you remember the scene from the movie Christmas Vacation where the squirrel jumps out of the tree and chaos ensues? It is one of my favourite comedic scenes, especially when the grandfather shouts, "Squirrel." I still laugh at that scene and find these creatures fascinating.
You can watch the clip here.
Earlier this week, as Rick and I walked the boardwalk by the bay, we had an interesting conversation with a red squirrel. We noticed her immediately, sat by the bridge eating a seed left by adoring islanders. She ignored us but before we had crossed the bridge, she out-ran us up the trail. 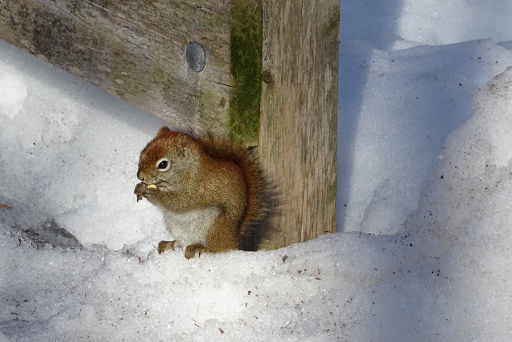 When we arrived at the feeder and stopped for a look, she circled each of us and chatted as she did. The squirrels in this area are accustomed to admirers feeding them and now expect that every passer-by has the same intention. This one focussed on Rick and stood in front of him, looking up and saying something in her squirrel speak. Rick showed her his empty gloved hands, saying,"I don't have any peanuts for you today. Next time." 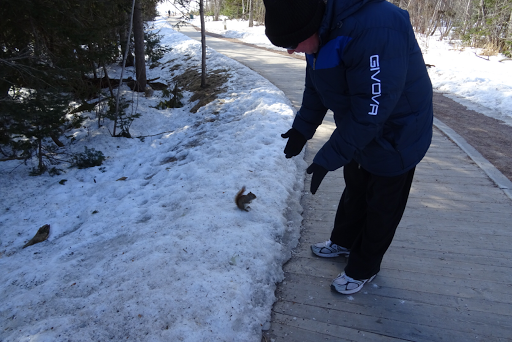 The squirrel turned her back on Rick, now making that squirrel noise, like a prolonged clicking sound you hear sometimes in the distance as you walk through their habitat. That day, it sounded like she was scolding Rick. 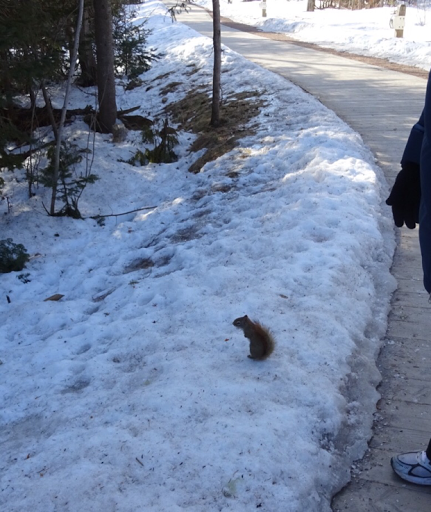 There are so many interesting stories about squirrels. One friend told a story about cookies she made and put in a plastic container inside a box for overnight. She left the box on the balcony. The next morning, ready to leave the house, she went to the balcony to discover the cookies, intended for a party, all over the balcony. Soil from flower pots covered the balcony and pieces of cookie were buried in the pots. Squirrels had opened the box and the plastic container. That day, she realized that squirrels were now climbing up the corner of her building all the way to the seventh floor.
On another occasion, on a particularly warm late autumn day, my friend left her apartment with just the screen door closing off the balcony. She had decorated for Christmas, putting a Dickens village on display. She used cotton wool as snow, and had piped green icing on inverted ice cream cones for trees. It looked so pretty.
When she returned home, a squirrel had come through the lower part of the screen, eaten the "trees" and taken all the cotton wool back through the hole in the screen. Telltale bits of wool now stuck to the screen.
The final story is one from our time in Howley, Newfoundland when we vacationed there over a few summers when our daughter was young. We had a travel trailer that we parked on a piece of land on Grand Lake and Rick's parents did the same. We loved our time there, sat around campfires, fishing, picking berries, paddle-boating on the lake, riding the All Terrain Vehicle on the old dirt road.
One of our favourite meals was pea soup, cooked on the propane stove. We always made dumplings or as Newfoundlanders call them, dough b'ys, putting the floury lumps to cook in the pot when the soup was almost done. Sometimes, they were perfect, light and fluffly. Other times, they were dunch, which is soggy or doughy. Dunch dough b'ys always made it to the fire pit where we burned the evidence that night.
One day, we watched in amusement as a squirrel grabbed one of these doughy balls and struggled down the road with it. He stopped for a breather often and eventually disappeared into the woods. He didn't come back for the rest of them and didn't tell his friends either. One was all he could stomach. Even squirrels have a discriminating palate when it comes to dough b'ys.
Do you have any squirrel stories to share?
Posted by Marie Smith at 03:38

At the cottage, we have been nagged by red squirrels as we reclined on the hammock underneath THEIR trees.

They are accomplished acrobats, too. When I used to feed the birds, they would climb up on the feeders in the most ingenious ways to get to the seeds inside. If I chased them away, they would leap to the nearby tree. Once when the tree was trimmed, I watched a squirrel jump to the nonexistent tree limb and fall one story to the ground, apparently unharmed and undaunted. :-)

My neighbour left muffins on her kitchen counter and while she was out a squirrel broke into her apartment through the screen and stored all the muffins in her beds. Guess he was going to hibernate there!

Oh I love these little creatures!! I have tried hard to take photos but they seem to be shy around the places where I lived. I love squirrels!

Incredible fall. They must very flexible and can be such a nuisance.

Storing them for the winter I guess. incredible.

They are gorgeous creatures. I love them but they can be pests as well. I guess we each have our good and bad points.

Hi! What a coincidence! Ha! Your squirrel is much cuter though! It is standing so coy and cute! I love Christmas Vacation! Andrea

My Rare One had a running battle all summer with squirrels in her back yard. I better not tell you any of those stories.

I wish the squirrels here were a quarter as tame. Perhaps having the dogs puts them off.

Debra, you always make me laugh. I would like to have your sense of humour! Rather, my husband has to explain some jokes to me. Oh well.

Adrian, I think you are right. There are many accompanied dogs on the trail and the squirrels run off when they approach. Instinct I guess.

Trying again to leave a comment. Love the squirrely story. I wish we had red squirrels here. Ours are grey and black and bigger. The movie clip was very funny.

What funny stories. I have learned that my little balcony is known by all the birds, squirrels, possums and raccoons as the place to go. If anything slightly edible, which includes cat food or dog bones is left on the porch, some creature is going to try it out. I think that is why I love my yard. Full of freeloaders.

It sounds like an interesting place to sit near a window and watch with a cup of coffee in hand.

Last year was the first that we began noticing a pair of squirrels in our backyard. Now we see 3...
They are pesty and eat our fruit before we can get to it sometimes. They are gray with huge bushy tails. Every once in a while we see a much smaller red squirrel. Never had one here before this year. I think they like our yard since we have no pets to give them chase.
Love the shot of the squirrel turning his back on your Hubby.

I grew up with beautiful squirrels in Michigan, Marie, and always saw them as one of the more adorable animals ever created. Until we moved to Atlanta! That's where B-B guns are ever at the ready to nip them on the spot because they get into attics and under the eaves, gnawing through everything they can get their hands on. We had a speaker system rigged on our screened-in porch but the squirrels eventually gnawed through all the wires and cables, destroying the entire system. In Atlanta/the South, they're considered rodents...which still makes me sad to this day! (sigh)

I think you are right about your lack of pets encouraging the squirrels to stay around. I too love the photo of the back of the squirrel and Rick. We laughed at the time and I smile every time I see it now.

One's history with the creatures would affect one's attitude towards them for sure. I love them and only see the cuteness now. That may change with time.