Orby Head is in the National Park on the north shore of Prince Edward Island. From the sandstone cliffs overlooking the Gulf of St Lawrence, one can see east and west along the north coast. 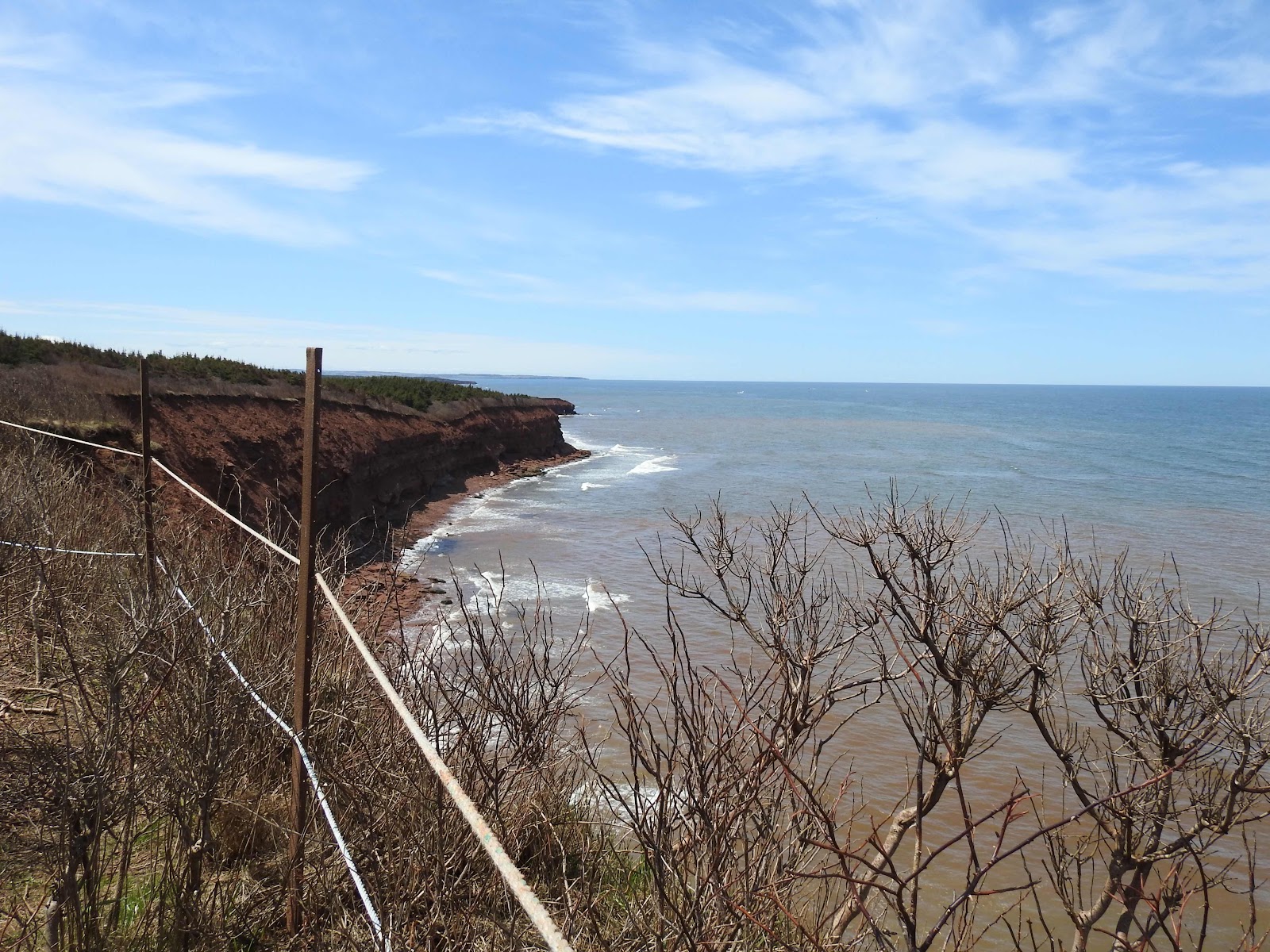 The view of the cliffs at Orby Head is one of my favourites on the island. 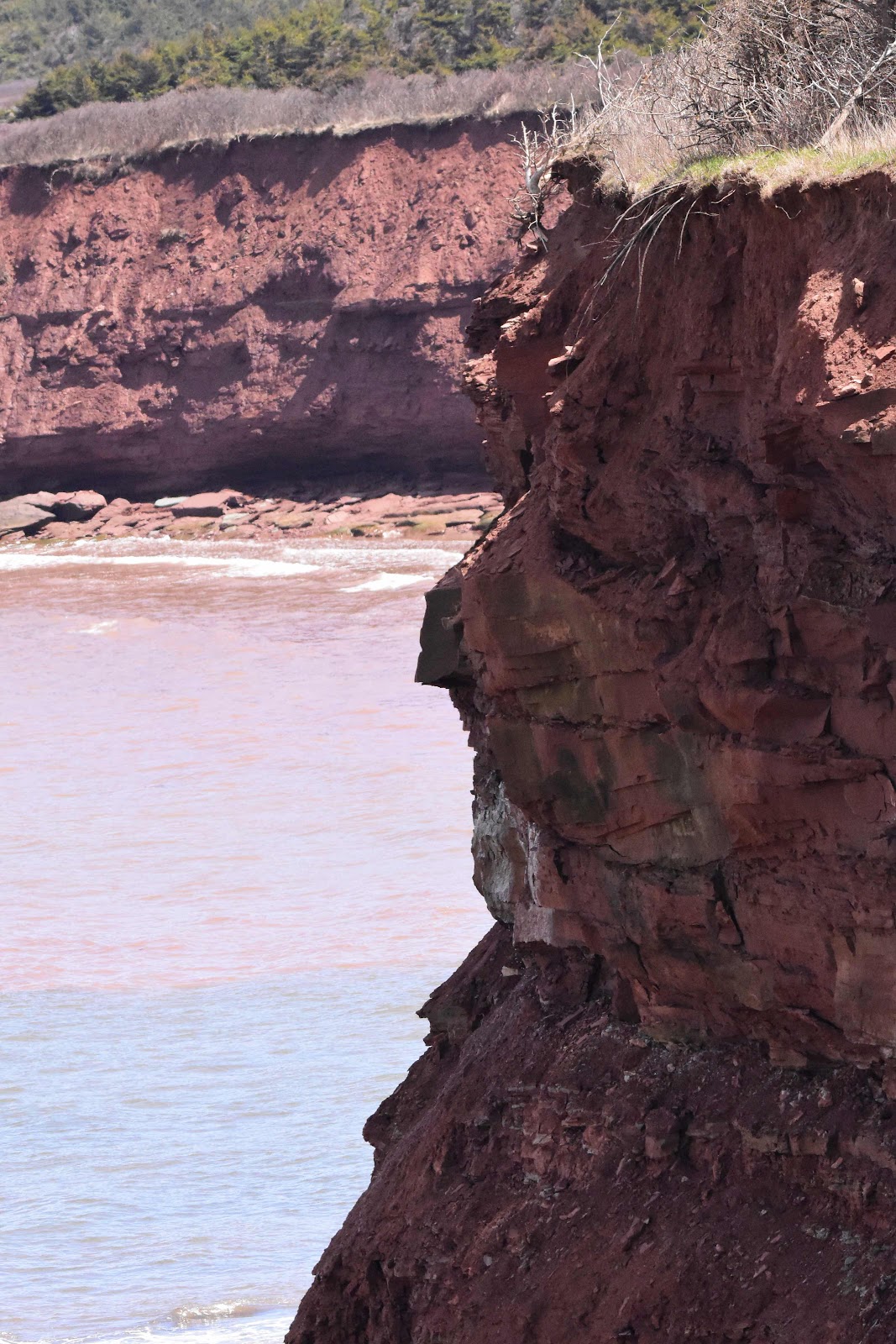 The sandstone cliffs erode at an alarming rate. We notice a difference each spring after the winter storms and the freeze and thaw cycles which were common this past year. 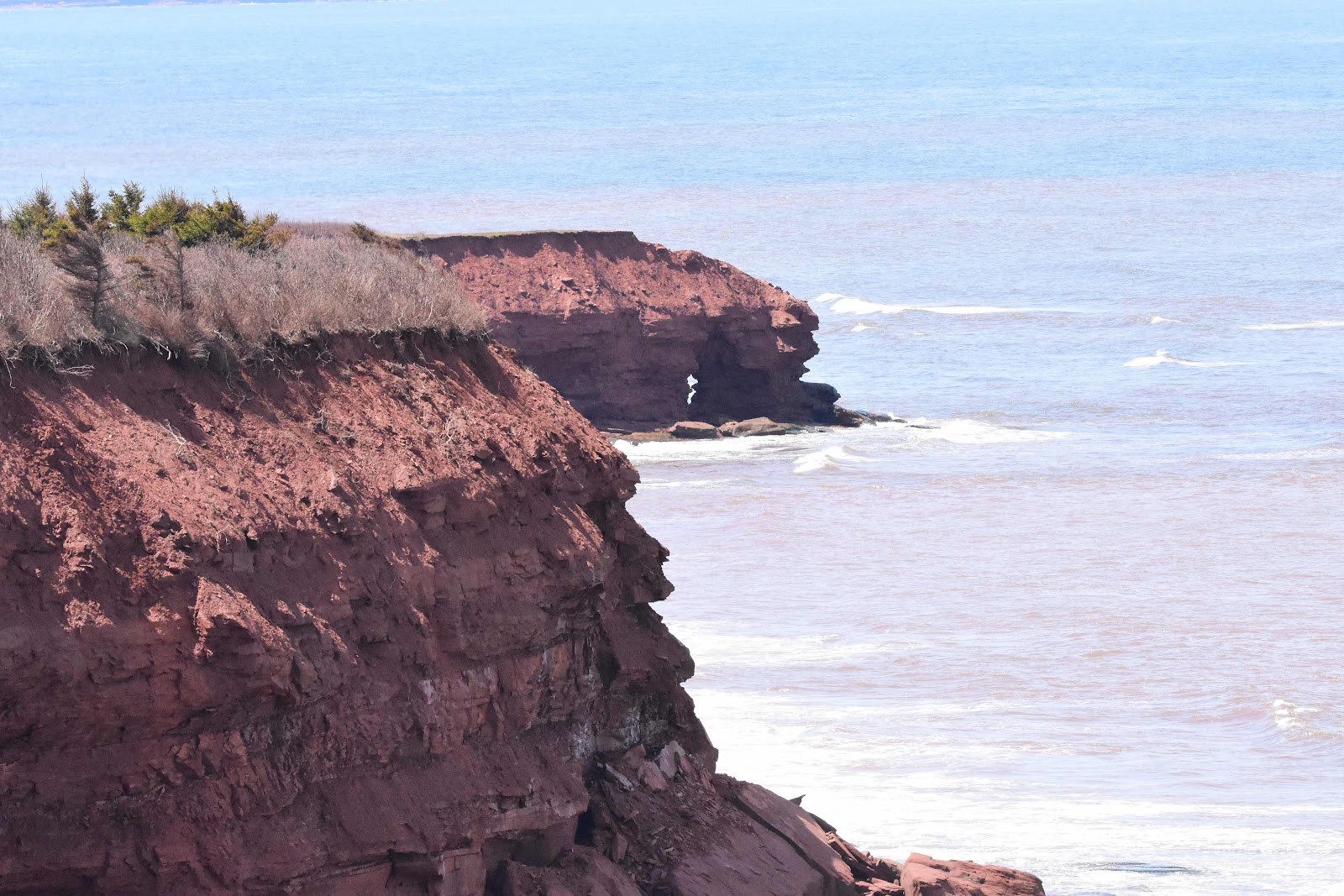 For my husband and I, the added attraction of Orby Head is the colony of Double-crested cormorants which nest in the cliffs and hang out on the Head. They fish just off shore as the lobster boats pass nearby. 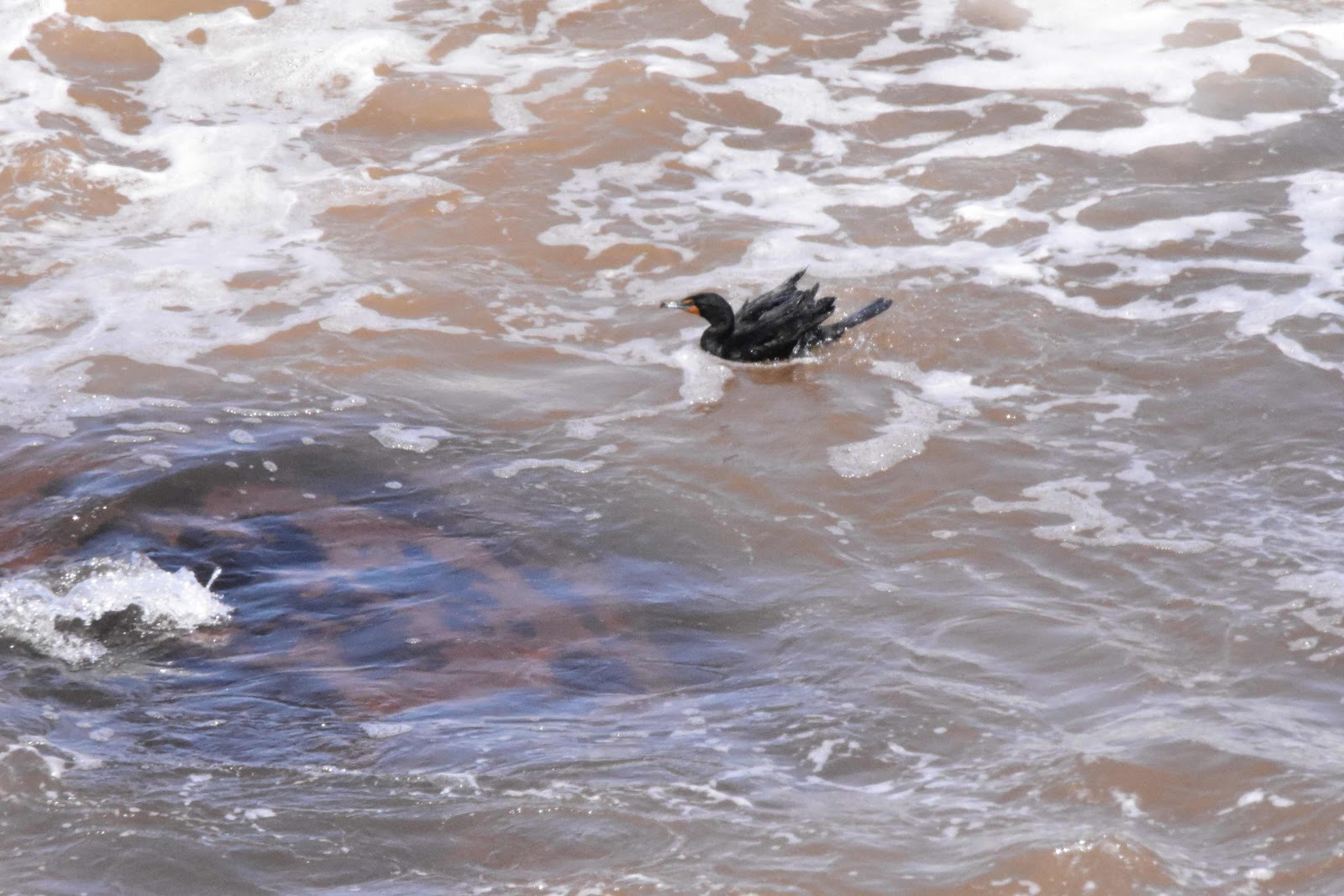 This bird looks like a pre-historic creature, not pretty like shorebirds and song birds. Yet, there is something beautiful about these strange looking birds. They have blue eyes and long beaks. Behind the beaks, a bright orange colour makes them easily identifiable. 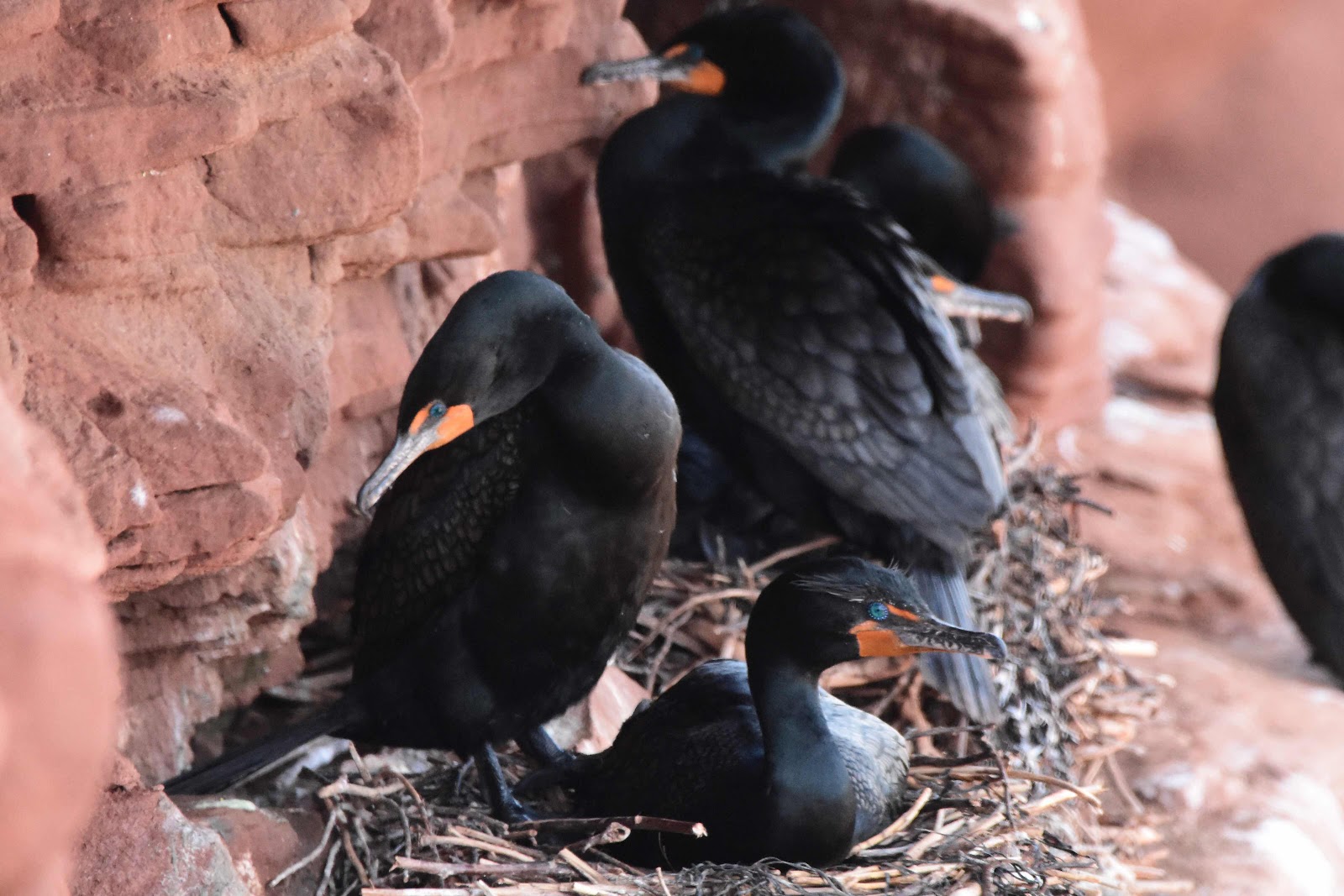 The black feathers on their backs and wings are each distinguishable. The fine feathers of the belly, neck and head are streamlined and perfect for diving and swimming. 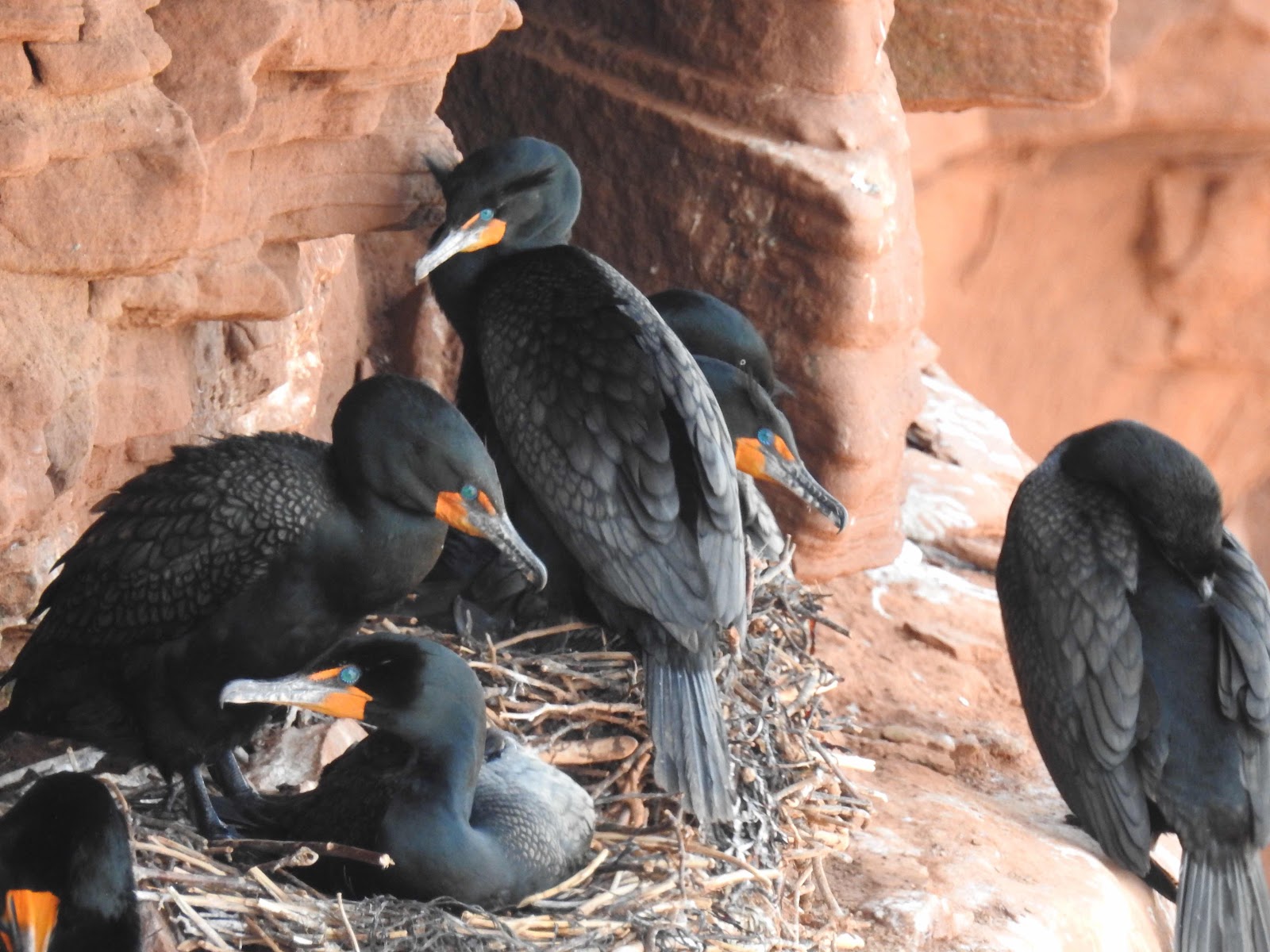 Double crests are the feathers above the eyes which are only there in mating season. The best photo I have of these crests was taken of a bird at another location. 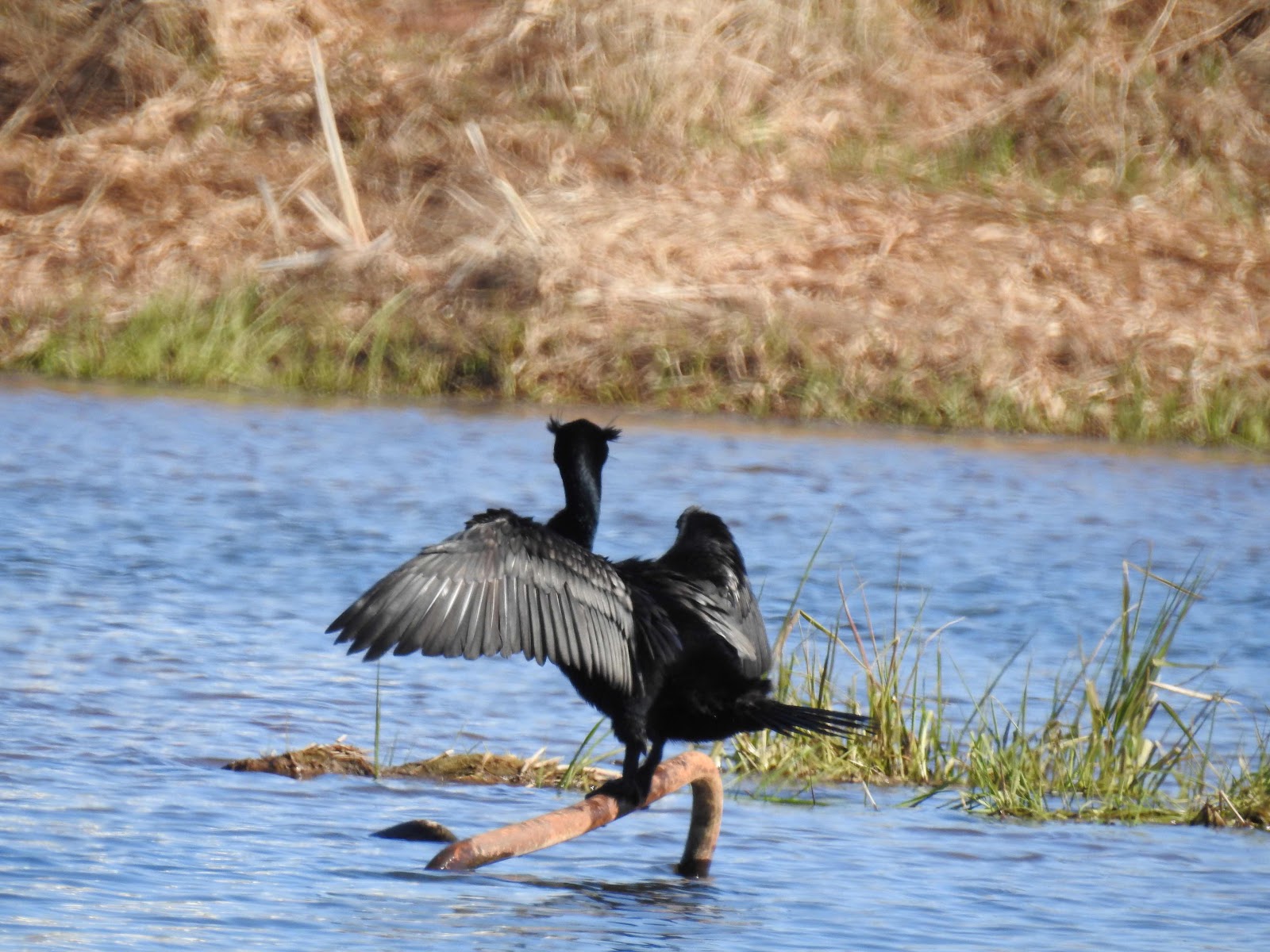 Their wings aren’t water proof and cormorants spread them when they land after a swim. It was a lovely day for drying wings as you can see. 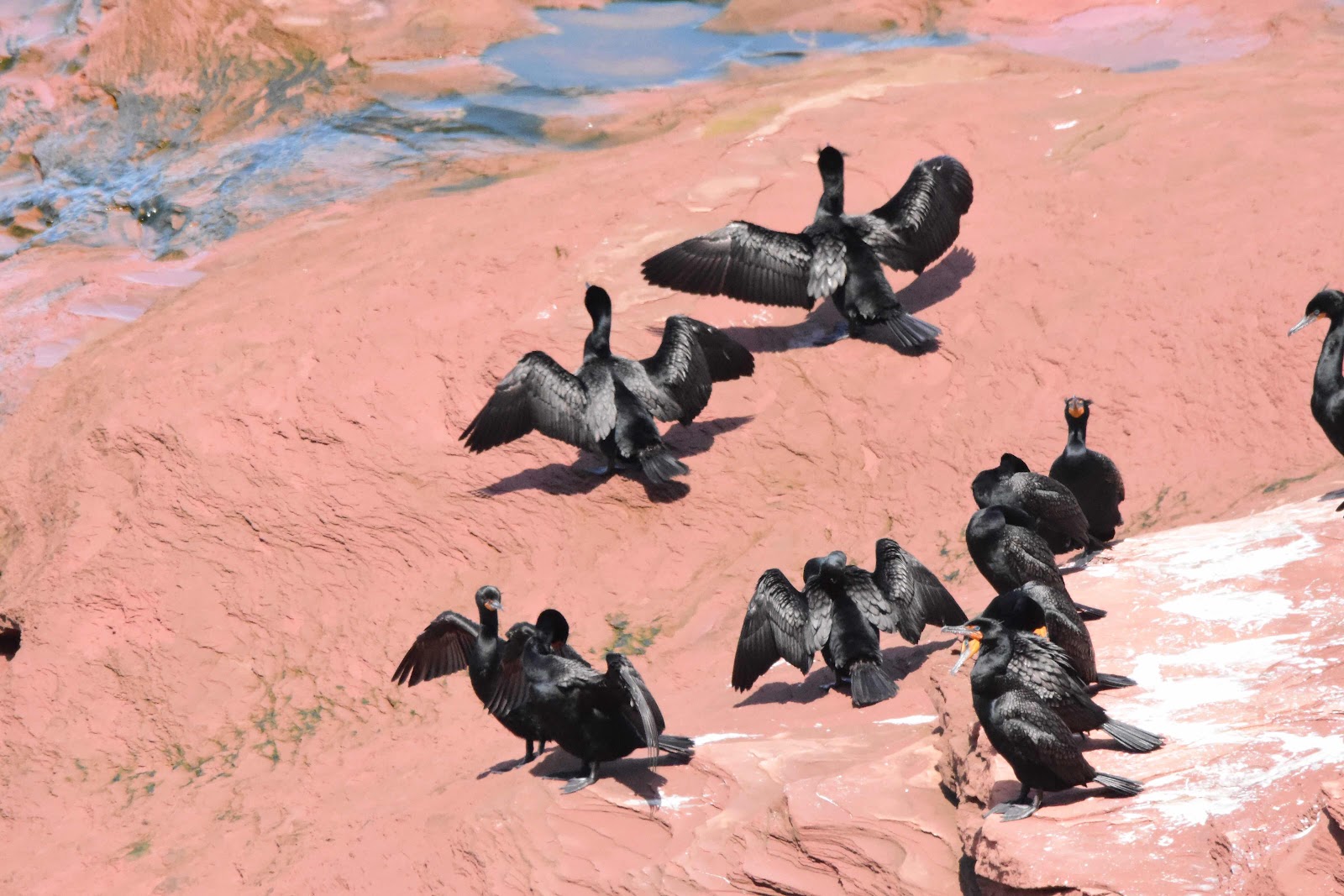 The colony at Orby Head has its nests on ledges in the cliffs. 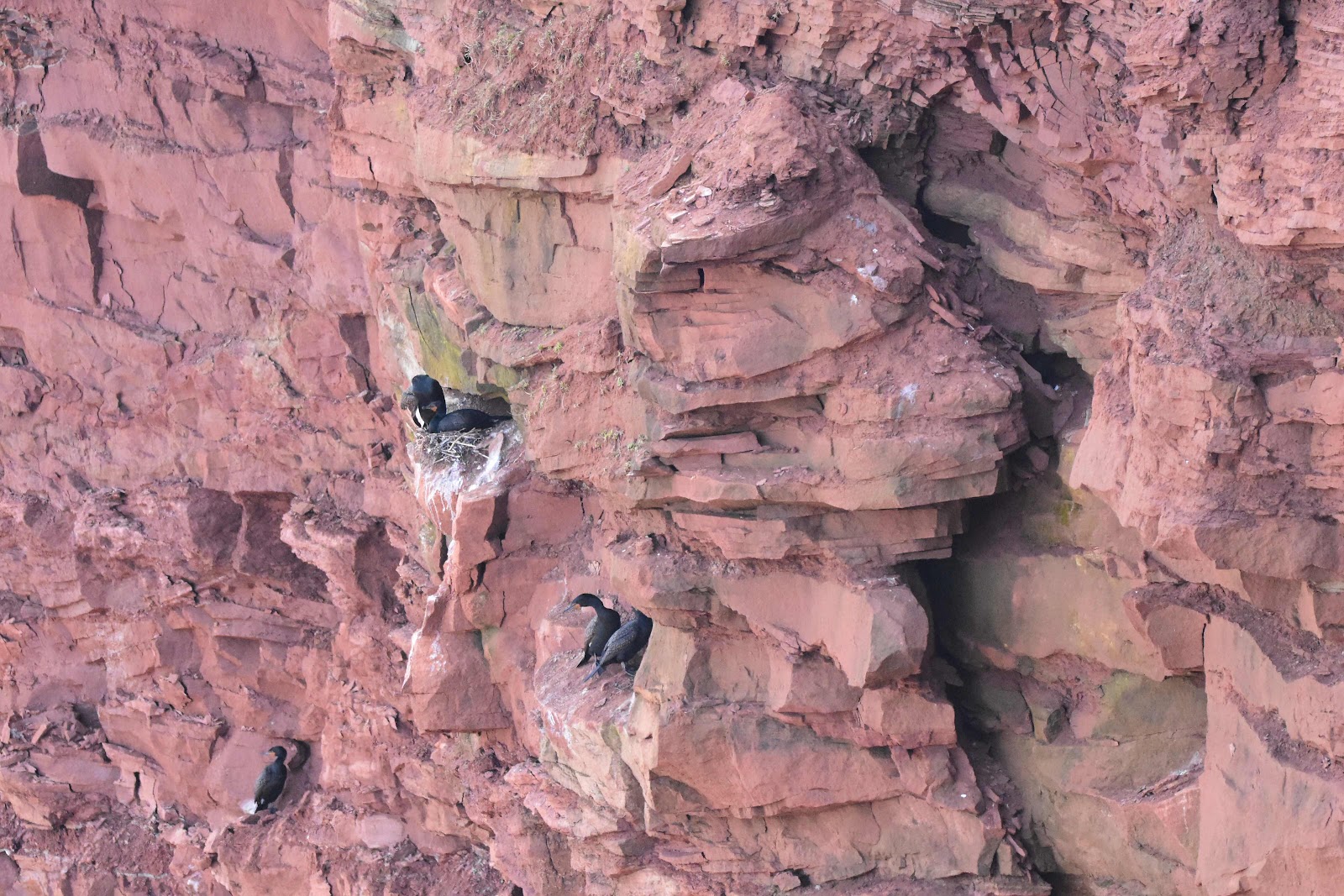 They like to hang out together on a ledge over the rocks. 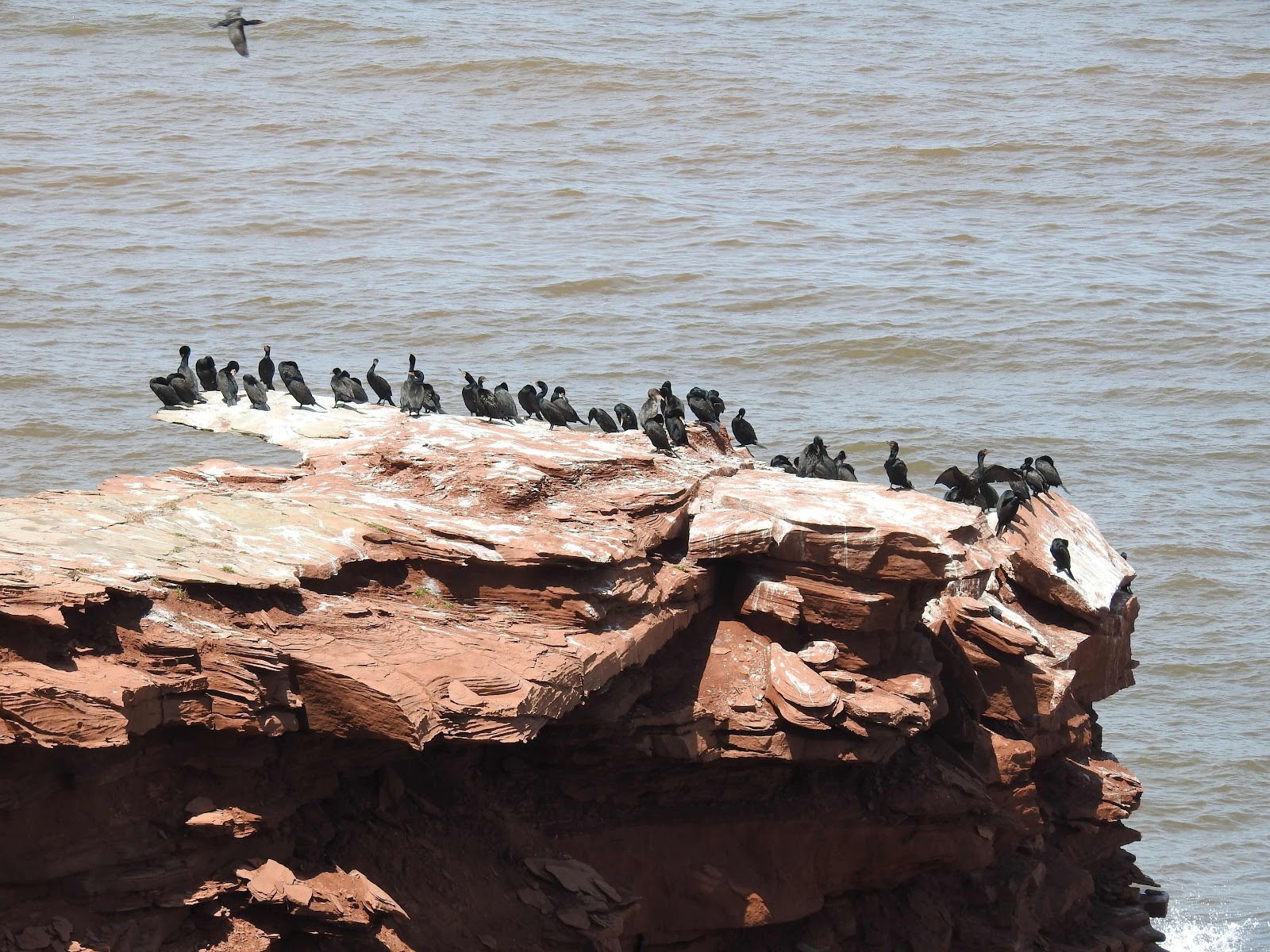 The birds make a croaking sound which is not a traditional bird call but we enjoy watching them any chance we get.

It's interesting to see them nesting in the cliffs.

I would love to see these birds in the wild, too. They are sure interesting looking. Thank you for the detailed pictures and commentary. You do live in a beautiful place, Marie. To think that before I "met" you I didn't know anything about PEI! :-)

The birds are very unique and so interesting. The blue eyes are amazing. Thanks for sharing your visit!

They look beautiful! I imagine the view from there must be lovely!

I see these here in my finger of the river on rare instances. I have seen them close up in Florida during winters. Your photos are a nice example of their lives. Thanks!!

Love the views of the coast and cliffs. The Cormorants are a cool looking bird, it is nice to see where they nest. Enjoy your day, have a great new week ahead.

The birds are fascinating!

We have Cormorants, but not the Double-Crested kind. Yours look rather smarter and more colourful and I'd love to see them in the flesh - or maybe that should be "in the feathers"!

What a SPECTACULAR area, with a bird to match. Many, many thanks.

Thanks for sharing these great pictures of the Cormorants. I have tried so often to get a decent picture of them, but so far have not succeeded.

Fascinating birds to watch. I never knew they nested on the cliffs. Great place to hangout and watch them. Great photos as usual, Marie. Have a lovely evening.

I think that is a beautiful bird!

Great stuff! I love cormorants. There used to be half a dozen that visited a little nature park in Michigan I used to frequent.

Once you see cormorants close up, there is little doubt that they really are related to dinosaurs!

Gosh these cormorants are so different from ours, more colourful markings. Fascinating to see them in their nests on the cliff, talk about precipitous ☺

They sound a bit like a medium sized dog barking from behind closed door. Really interesting.

What stunning shots of the cormorants, Marie! Those cliffs are beautiful as well.

The erosion is happening extremely fast. Very worrisome.
Those birds are not generally liked, or rather, they are not considered beautiful, but you managed to photograph them in a way that they don't look too bad. :)

awesome captures, we have them here!!!

too bad about the erosion, i wonder if anything can be done...probably not!!